Mine and my husband's schedule as of this past week have been a little unusual for us.  He's been doing some home construction work in the afternoons into the evenings since Monday, which has left me scrambling to search for things for dinner.  Since I am not employed and although he is working at the moment on this particular job, money is still hard to come by.  So, I've had to get a bit creative with dinners to feed myself and my four kids since we haven't been able to get to the grocery store.

On Monday I attempted what I thought would be easy.  I wasn't feeling the greatest and thought that broccoli cheese soup sounded tasty.  I had a pretty good recipe and it probably would have been much better had I not made a huge faux pas.  I wanted to puree the soup, since it had potato chunks and cauliflower as well as the broccoli.  I never use the food processor.  NEVER.  Now I know why I've been so defiant against that little beast of an appliance.  I didn't read the side of the processor that said "Liquid Max Fill".  Damned my ignorance.  I dumped the entire large pot of soup into it, hence losing most of the broth on the counter and having to go on a rescue mission to save what hadn't leaked out the sides.  Despite that, it wasn't awful.  It wasn't my favorite soup however.  That teamed up with bread that I had sent my son to the store to buy that had some mysterious chunks of something in it, it wasn't a winner of a dinner.  (I dig that rhyme!)

Tuesday night I wanted to try and go for something a little more smart and kid friendly.  At first I had decided on a Kraft Macaroni and Cheese casserole.  After I realized that the recipe called for the Deluxe Mac & Cheese dinner and not the boxed stuff I had, I figured I needed to come up with a Plan B.  I found another recipe on the good ole' internet for Macaroni and Cheese Pizza.  It was more like a casserole than a pizza, being that it didn't involve any crust.  This recipe involved 2 regular sized boxes of Kraft Macaroni and Cheese along with my home made pizza sauce (we always have ingredients for red sauces in the house!).  Took about an hour to make and cook and the kids L-O-V-E-D it!!!  There is no better way to make your kids happy than to combine two kid favorites like pizza and macaroni and cheese.  My six year old did make a request though, he says next time I should make my home made crust along with it and make it a real pizza!

How ever was I going to top that?  Well, when Wednesday rolled around I was nervous.  I knew the food supply was pretty low and I still wasn't feeling totally up to par (not enough to head to the grocery store).  I knew that the only meat we had in the house that I could identify (I occasionally have no idea what kind of meat my husband buys and sticks in the freezer) was two chicken breasts.  So I thought I could do some kind of stir fry if I cut that up and it would be plenty of food for dinner.  I couldn't decide what to put in it though.  I had already used up the broccoli/cauliflower mix on Monday.  I used the frozen peas with dinner on Tuesday.  All that was left was frozen corn.  I didn't feel like that was enough.  So I began my internet search, yet again, for a new chicken stir fry recipe.

I came across an interesting blend of apples and maple syrup.  I recalled we had a few Granny Smiths in the refrigerator still and we had oodles of maple syrup (or maple syrple as the kids like to call it!).  The only thing I didn't have was apple juice for the marinade.  That was easily resolved with a quick walk to the gas station.  Here are the steps I took to make the dinner:

**Since this is a stir fry, I made 2 cups of white rice with the meal and cooked it along side the chicken/apple mixture**

1:  I defrosted two decent sized chicken breasts (had to put it in the microwave due to lack of time) and then marinated the chicken with about 16 oz of apple juice, 3 tablespoons of syrup and 1/2 teaspoon of thyme.

2:  I combined those in a Ziploc freezer bag and let the bag sit in a sink full of luke warm water for 30 minutes.  It probably ended up being more like 45 minutes though as I do tend to  get easily distracted.

3:  After that I peeled and cut up 3 small Granny Smith apples into small pieces and then set them aside.

4:  Then I opened the bag of chicken (reserving all of the remaining marinade), took each piece out one by one, cut off any fat and sliced it up into little pieces.

5:  I used my large frying pan to cook the chicken, by first using a small amount of olive oil to keep the chicken from sticking and then cooking the chicken until it was done all the way through.

6:  The next step is to remove the chicken from the pan (I put it in a little bowl off to the side).

7:  Next, I melted about a tablespoon of butter in the same frying pan and threw the apples in.  I cooked them for about 5 minutes or so and then added 1/8 teaspoon of cinnamon, 1/4 teaspoon of pepper, a 1/4 teaspoon of salt (you of course can add as little or as much as you'd like should you try this recipe) and poured in the remaining marinade.  I brought this mixture to a boil, then reduced heat and simmered.

8:  When I thought everything had simmered for long enough (about five minutes) I threw the chicken back in the mixture and cooked it all together.

9:  By this time, my rice was done cooking, so I added the rice to the frying pain as well and stirred it all together.  I found that the access marinade soaked into the rice very nicely.  It wasn't too dry and it wasn't too soupy.

I did overcook the rice just a tad, but that had nothing to do with the rice or the frying pan and everything to do with my poor decision making skills of trying to cram 2 cups of rice into the smallest pan I own.  "It'll fit!"  I told myself.  Next time I'll remind myself to give myself a swift kick to the rear if I ever think that's a good idea again!

I have to add, I wasn't a big fan of the thyme.  If anything, I think it would have been really tasty with more cinnamon in it.  What did work well was putting the bottle of "maple syrple" on the table for the kids to have as a dip.  They loved it!  They even said they were going to request it for their next birthday dinners!  I did take a picture.  It does look a little mushy in the picture, but that's mostly due to the overcooked rice.  It tasted really good though, I loved the apples and I never really ever thought about cooking apples in a dish before.  It's definitely something I'd do again!!! 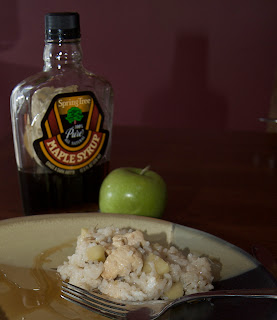 What will I have tonight and tomorrow?  My creativity reached it's peak, it does happen from time to time.  Tonight is frozen pizza night and tomorrow will be left overs.  Although, left over nights tend to be the kids favorite nights of the week.  They love potluck eating!!
Posted by Cathy at 4:16 PM 1 comment: