Show Him the Money

I'm wondering if I should be concerned that my Kindergartner can go to school and the other kids give him money for no reason.  He comes home with a dollar here or fifty cents there.  I tell him not to take the money so what does he do?  He takes it and gives it to another kid in the class.  Crafty little man.

Let's just hope I don't get angry parents wanting to beat me up over a buck.  Maybe I should start sending him to school with change to return the favor?  Decrease the amount of animosity?  And what is it with this little girl that tells him that his jacket smells bad one day and then brings him cheese the next day? 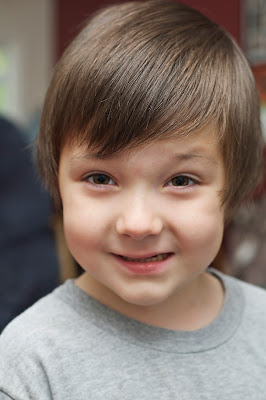 I'm beginning to realize that I post on Facebook a lot.  New photos, hats for sale, photography, kid says something funny, I stubbed my toe... everything seems to go there.  You can't really blame me.  I spend the majority of my time with kids and half a morning with my 6 month old baby.  I've got to have some kind of outlet.  But why do that when I have this wide open blog here?

It's been about 2 months since my last blog.  Which talked about my cranky morning ways and eating donuts.  Stimulating stuff.  Ironically, I also had donuts this morning.  Not Dunkin Donuts, but some small powdered Hostess donuts.  In case you were wondering.

I want to try a little harder to put my thoughts and such here.  I do like writing.  And luckily, blogger doesn't have a character limit.

So far today has been pretty mild.  I wasn't feeling well yesterday but managed to go out and get some yarn for some Etsy projects.  My excellent husband ran out and grabbed some Panera soup for me because he's just awesome like that.  I didn't get a ton of sleep because my little guy was up here and there and then my eight year old woke me up at 3am telling me he had a stomach ache.

I thought it was 5:30 when he woke me up and in my lovely half awakened style asked where Dad was so that he could deal with this issue (my husband is typically up by 5am and out the door around 5:30ish).  My son informed me it was only 3am so I told him to go back to bed and sleep it off.  I would feel badly about shooing him away, but he did sleep it off and felt fine when he woke up again for school.

Despite the many awakenings, I am surprisingly not too tired.  Which is good because I have to be on my toes when I deal with my teenager.  He's in 8th grade this year.  Tonight is also his Halloween dance.  At the beginning of the week he made a promise that he was going to do a great job on all of his chores because he really wanted to go.

Some people may not agree with this way of parenting, but I feel like kids need to earn their rights to have fun.  Now, if he was a straight A student, did all of his chores properly and was not out to cause trouble at every turn I would probably let him go with out batting an eye.  However, he isn't a straight A student.  He could be, but in true teenage spirit, he would rather socialize than focus.  He'd also rather watch me rewash all of the dishes before using them than doing the job correctly.  So, we are on an 'earn to have fun' plan.

Upon getting ready to eat my tasty Hostess donuts, I grabbed a small plate out of the dishwasher (which isn't really a dishwasher at this point, it's a dish holder... it's broken).  It was completely greasy.  Yuck.  I told him that I have a hard time saying yes to him going to the Halloween dance when he has not upheld his end of the bargain.  A bargain he himself created.  So I get to be the bad guy in a bargain I didn't even create.  Yay me.

Despite this battle at 8am, I am still in a decent mood.  My husband and I have been battling bad jobs and financial strife for long enough and we are in hopes that the winds are beginning to change.  I can almost feel the weight being lifted off of my shoulders.

He's hopefully only a couple of weeks (if that long) away from being offered a new job.  This may require a short move northward, but it's not decided yet.  I'm almost welcoming of this change though.  Finding a home with space that actually accommodates seven humans and maybe a little more space for my photography business.  Things are looking upward.  We may even get to eat dinner outside of the house tonight!  Someone else to cook and someone else to do the dishes!  That's my kind of Friday!

Other than that, I've been busy with photography.  I'm happy with the direction that is all going and if it wasn't for the recent jobs I've booked we may not have been able to pay the mortgage.  It feels nice to have been able to help my husband by taking a little pressure off.  The knitting/crochet business has been treating me been pretty well too.  I can't complain much.

They say you learn something when you go through hard times.  I think I've learned a lot.  The most important one is learning that there really is nothing that my husband and I can't get through together.  My kids are awesome, they have learned to understand that when times are tough we all have to band together.  Like finding pennies in the street and putting them in our little bank.  They love helping!  I've learned that my husband is really good at sewing and can pretty much make anything out of anything.  He's hand made all of my kids costumes this year, which is amazing!  I can't wait to share that photos!  I've learned that I will always remember this hard time and make sure to be smarter about my decisions and the family decisions.

Well, that's about it for the moment.  It's not even noon yet, so we'll see what the rest of the day brings!
Posted by Cathy at 11:28 AM No comments: