The other morning I took my first shot at making fried eggs for breakfast.  It sounds pretty darn easy.  Melt some butter, crack the eggs in the pan and let them cook.  I thought I was being all fancy because I was following a recipe from the Food Network magazine.  Yep, a fancy egg recipe.  Shut up... there is such a thing.

I failed miserably.  I overcooked the yolks that were supposed to be all nice and runny and the bottom of the egg was burned.  I totally never thought I'd be talking about "nice and runny" eggs.  I've always hated the thoughts of any eggs that were not scrambled.  It actually made me come close to wanting to vomit.  I guess in my aging wisdom, I thought I should at least give them a try.  I would hate to meet my maker with out ever having tried a runny egg. 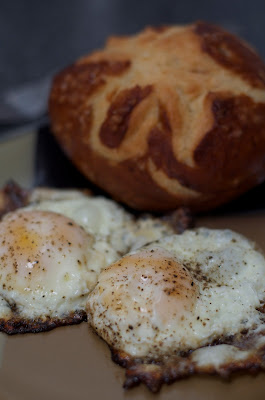 Anyway,  so I gave my 13 year old son the overcooked unmasterpiece (because 13 year olds will eat anything) and decided I would try again another day.

Another day came this morning.  I remembered that I wanted to keep the fire a little lower and to use a back burner.  I melted some butter and cracked two eggs into the pan.  I guess I used a tad too much butter because the pan was spitting at my like an angry camel.  The eggs overcooked again and this time my 13 year old was at school, so I couldn't feed them to him.  Down the drain they went.  I decided to try again.  Less butter this time and a bigger pan.  Still overcooked.  I think the Food Network magazine doesn't know how to fry eggs.  The recipe says you don't have to flip them, that you just cover the eggs after the outsides start to turn white.  You keep them covered for 4-6 minutes at medium high heat.  I'm sorry, (in the spirit of 'My Big Fat Greek Wedding') that no work.  Two more eggs down the drain.

I decided to stop trying to be fancy and find myself a youtube video about frying an egg.  Turns out there are a lot of them.  All of them call for a little egg flipping action.  I pulled out pan #3 and decided to only try one egg this time.  I used some of my husband's spiffy Butter Buds cooking spray instead of melting butter, let it heat up for a minute and then cracked the egg.

I clenched my tush and waited as I watched the outsides slowly turn white.  When I thought the time was right, I shoved my metal spatula under the egg (which doesn't do the job the way I'd like... need to remind the husband about picking up a nice, flexible plastic one) and gave it a quick flip.  I let is set for about a minute or two and then turned the fire off.

Viola.  I got myself a successfully fried egg. 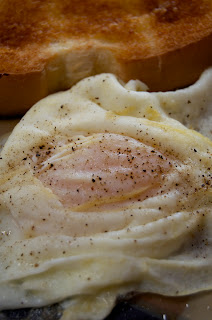 I found that I actually liked it!  Maybe I am fancy after all!
Posted by Cathy at 11:29 AM

"I think the Food Network magazine doesn't know how to fry eggs."

That is CLASSIC! You are too funny! KEEP THIS BLOG, GIRLIE!!!