This is How it Really Goes!

As a photographer, I get asked all the time if I have just as hard of a time photographing my own kids as I do theirs.  I always answer with a kind of snort and chuckle and say, "my children are the worst!!".  It's a good thing I am happy with only one good photo because I'd never be able to deliver to myself what I give to my clients!

So, I thought, just in case any of you don't believe me, I'd post a series of outtakes from my latest attempt at a group photo of my six glorious children.

This is the first shot I took this evening (I didn't apply any editing to any of these, they are as they are straight out of camera): 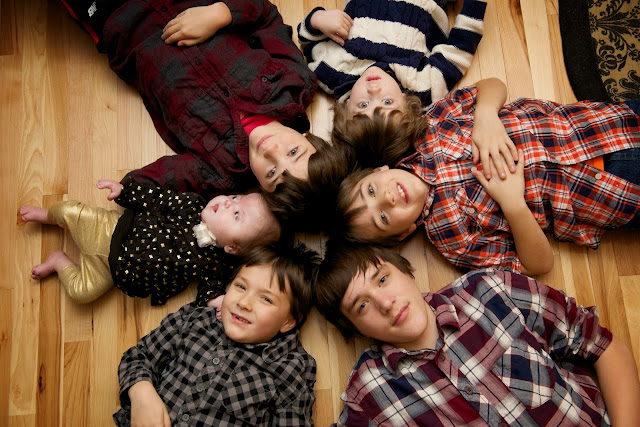 Not too bad for a test fire and I could probably edit this and use it.  I really wanted one with my daughter looking at me though.

This was the next one: 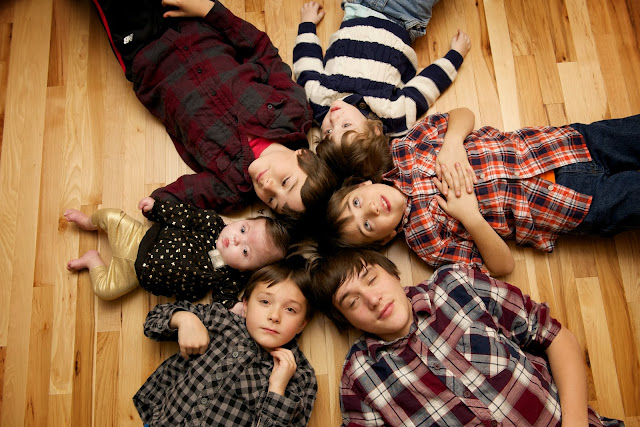 Not really sure what was going on here.  I've got one looking like he's saying a prayer (Andrew), perhaps that this photo shoot would be over.  One (the little guy at the top, Quentin) looking terrified of who knows what.  Then there's my oldest, Tyler, looking like… well… that.

I shoot off a few more and then my seven year old, Nick, decides the light is too bright for him and has to rub his eyes; forever apparently.  I turned off the kitchen lights and he still couldn't hang.  Then my photos start to look like this: 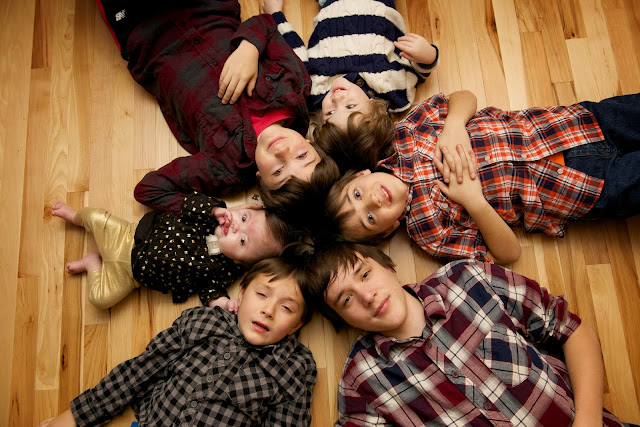 If you couldn't guess, Nick is the one on the bottom left there looking like he needs to either poop or vomit… maybe both.  But just look how lovingly his sister, Mallory, is placing her hand on his shoulder!

So I decide to let him move places with Andrew to see if that would help with the light problem.  By the time we got all of that accomplished though, my baby girl was about done.  So I got this: 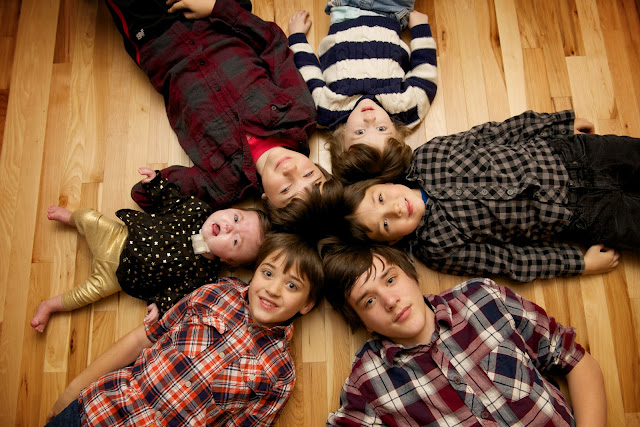 Here I've got two squinters, a crazy eyed Andrew and a baby that looks like she's actually trying as hard as she can to run the hell away from this ridiculous scene.

I called it quits after this.  We had some dinner.  I sulked.  I drank a beer.  I decided to give it another go in another room, hopefully with less painful lighting than the… no lighting… in the kitchen.

And yes, what a success it was. 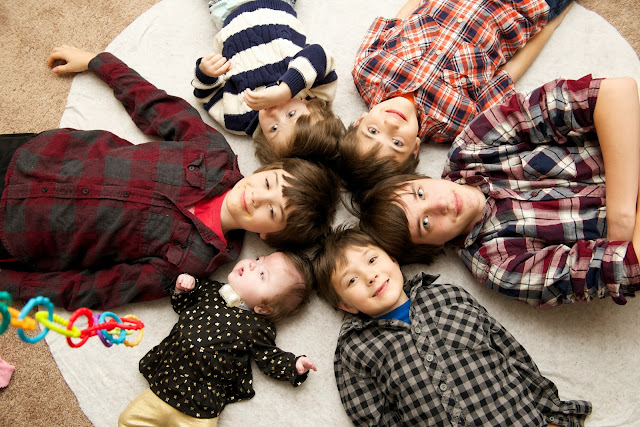 Only after shooting this entire batch did I realize my ten year old, Jeremiah, didn't bother to wash spaghetti off of his face.  Adds a little flare to the photo, huh?

My husband, Frank, and I did everything in our power to get smiles and good photos this time around.  We even started a lovely skit similar to what you'd hear from the Yip Yip Aliens on Sesame Street.  There was no stopping it though.  It came regardless of our efforts.  Yep, you've guessed it.  The return of the lights too bright, maybe needs to poop, definitely can't keep his eyes open, must rub them at all costs, he may be having a heart attack, squinting Nicholas. 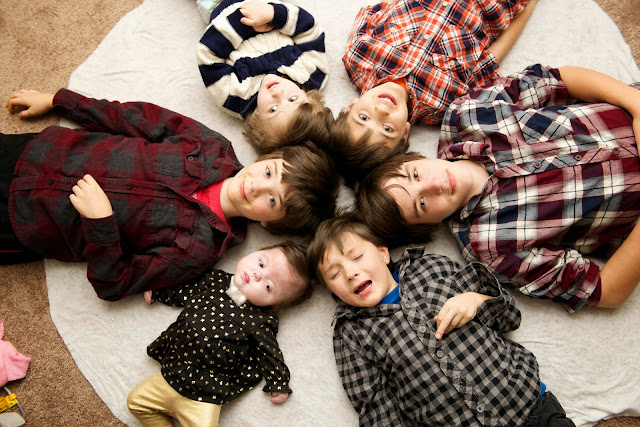 I think he may have been giving me the finger too.  Figures.

Then I had this brilliant idea that maybe he could just look lovingly at his beautiful little sister, to avoid any contact with whatever lights may be ailing him.  I got this amazing gem: 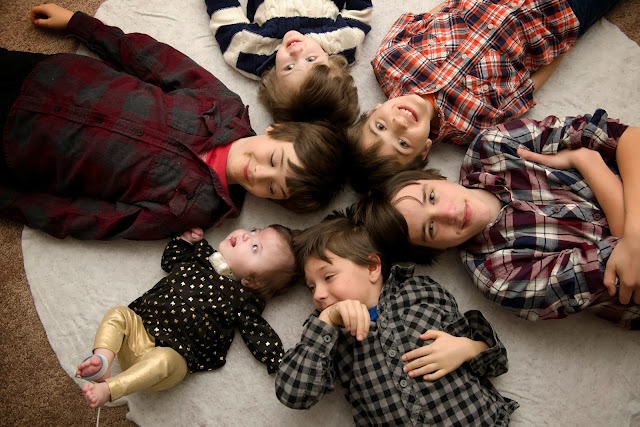 I think Nick may have either been going for the "I'm a cat licking myself" look or he was still really hungry after dinner.  Everyone else looked great otherwise.  I even got Mallory giving Jeremiah a little grin.  Damn….

So we finally get some kinks worked out and get Nick to smile.  But then Jeremiah looks like this: 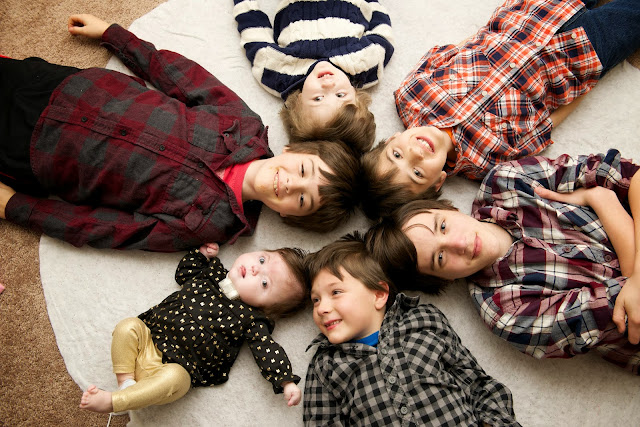 Attach that expression with this and you'll know why I won't ever use this… ever….

(Beware of the 'F' bomb at the beginning of this video)

So, anyway, after two head swaps, some cropping and my personal editing touches, I finally ended up with this photo, and it's definitely one I can live with.  One.  That's all I got, but only because I was forced to put different heads on my children. 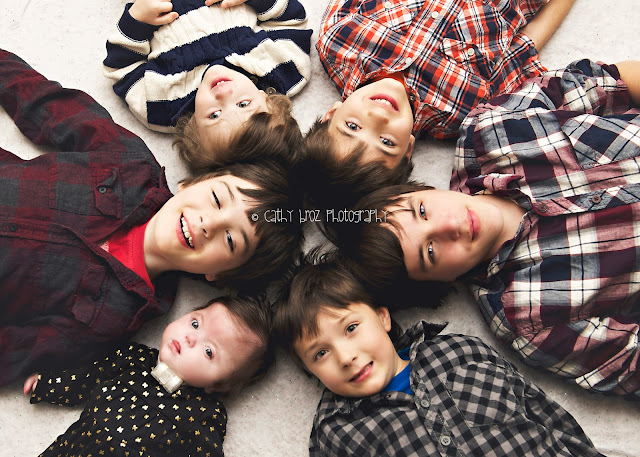