We go a good eight months every year with out a kid's birthday around here.  From February until June we celebrate six birthdays.  We've got one in February, three in April and two in June.  Andrew is our February guy, being born at 2:21am on 2/21!

He turned nine this year.  I know all parents say it, but I truly can't believe it.  Nine.  He's such a great kid too.  He's got a great sense of humor, a great sense of compassion and he's super intelligent.  He spent his entire week all revved up for his special day. 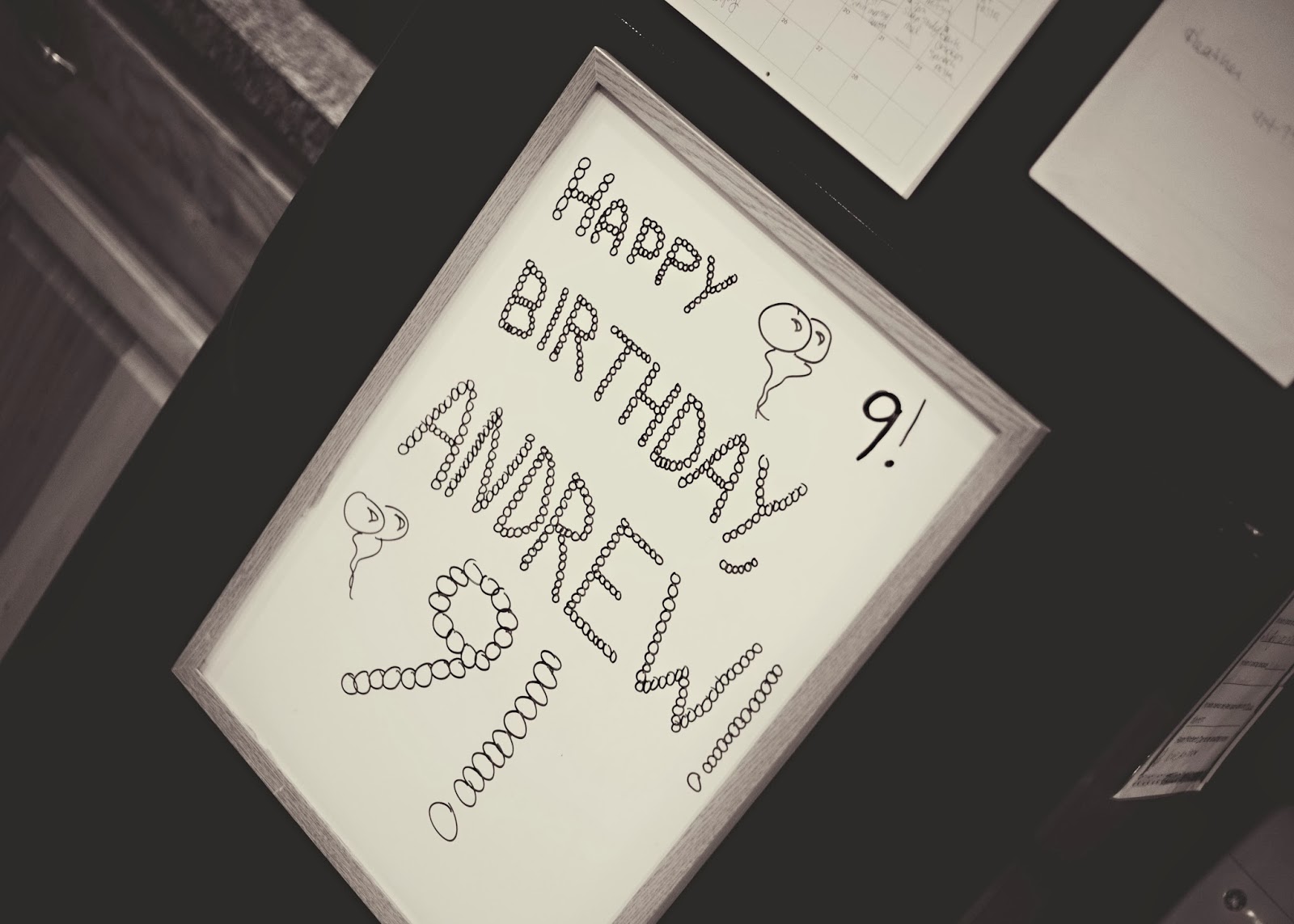 I think it started pretty well too.  Andrew lost a tooth about five days prior.  The tooth fairy decided to hold out and give him a really awesome birthday gift.  He woke up to a $20 bill under his pillow.  He was so excited and told all of his friends at school!  He said that they didn't believe him!  I was so glad that his day started off so happy!

When he got home from school (so lucky his birthday was on a Friday!) the first thing he wanted to do was play video games.  We have that pretty restricted around here, so it was such a special treat for him to be able to play and hang out with his brothers while his Dad and I prepared his requested meal. 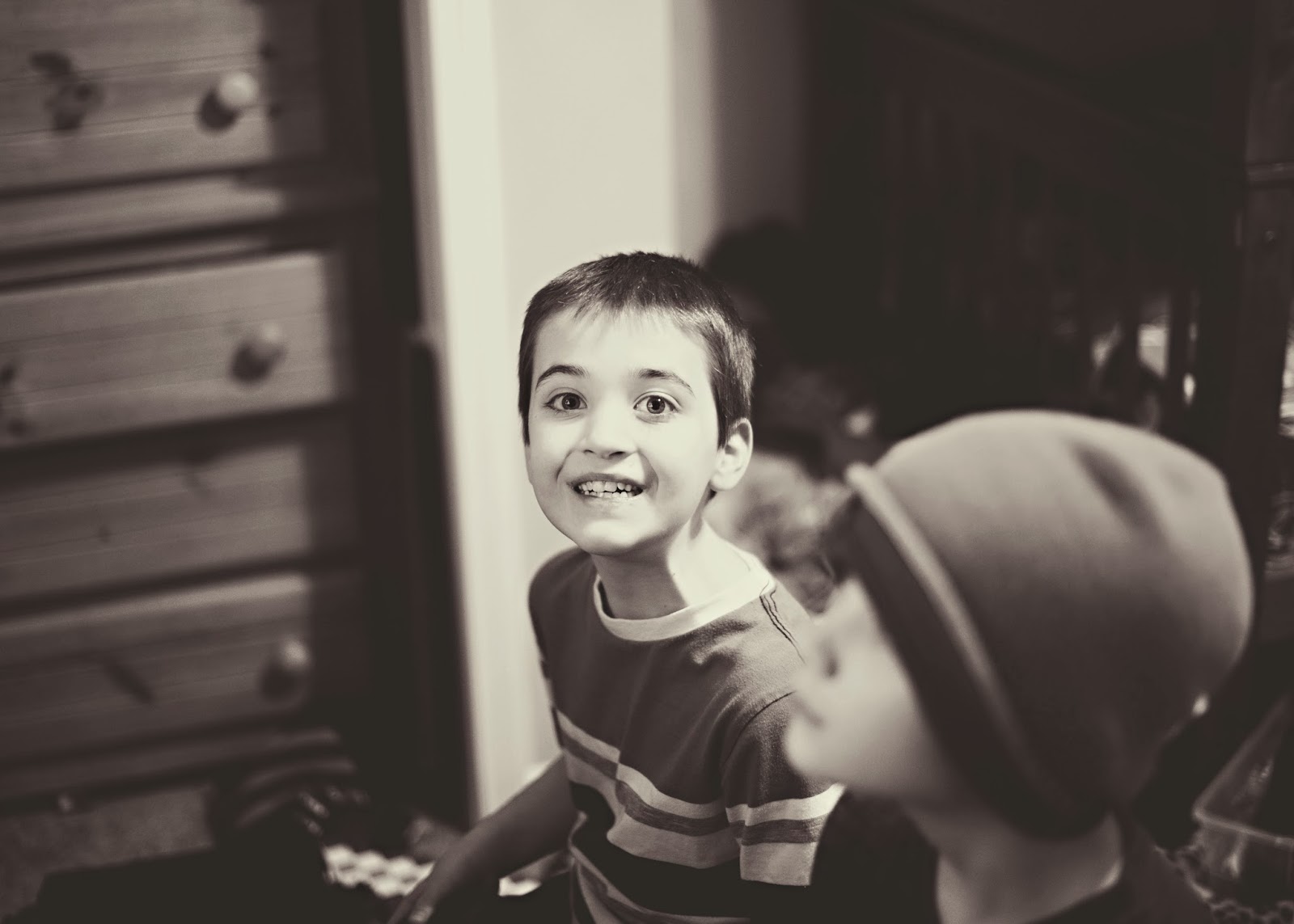 For those who may not know, we allow our children to pick their birthday meals and desserts.  Andrew's had some really awesome requests in the past.  When he was just three years old he requested orange roughy.   Another year he requested fettuccine alfredo.  This year he requested pasta salad with strawberries and cinnamon apple sauce.  He didn't want a cake either.  For his dessert he wanted root beer floats.  I thought this was the coolest idea! 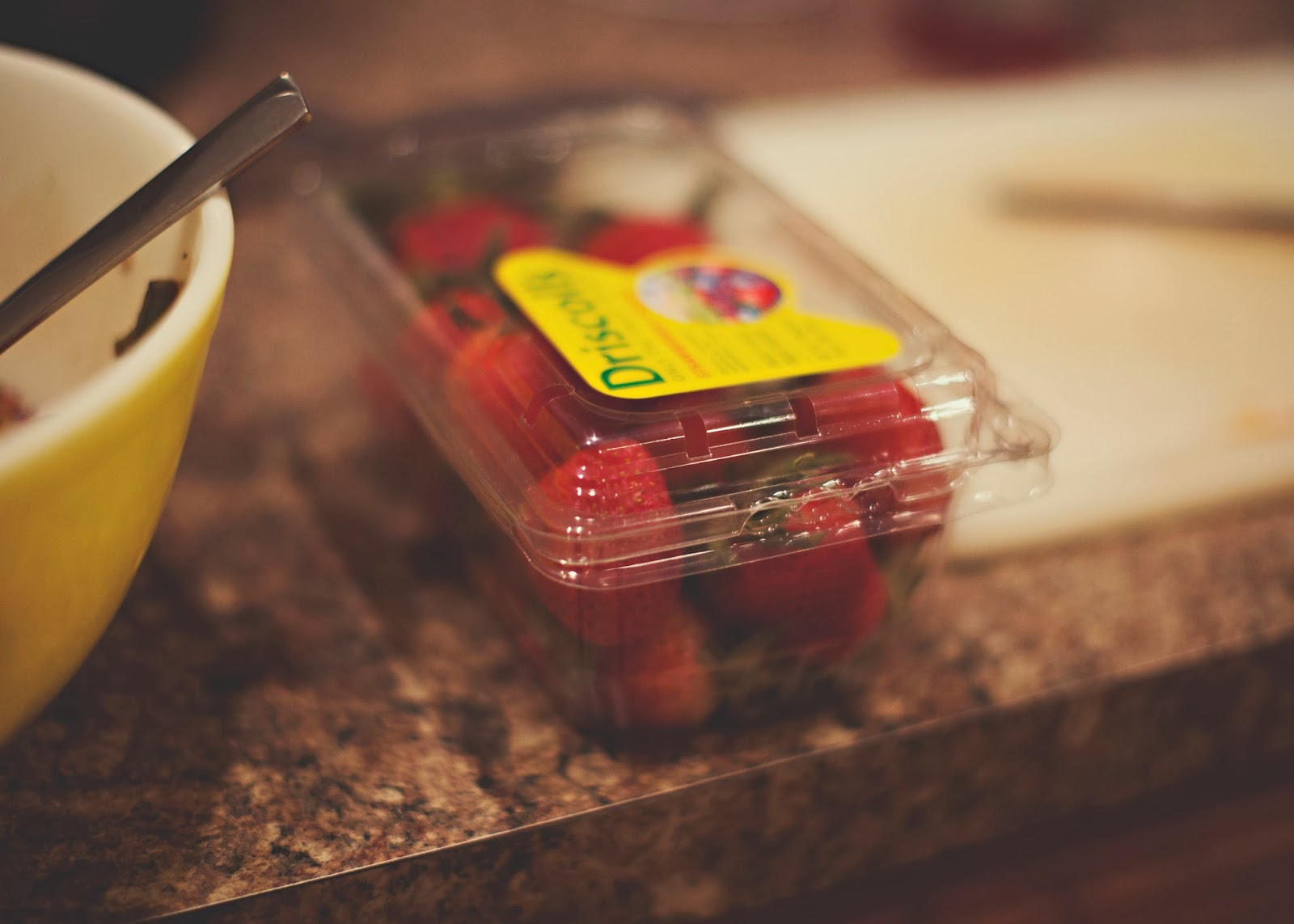 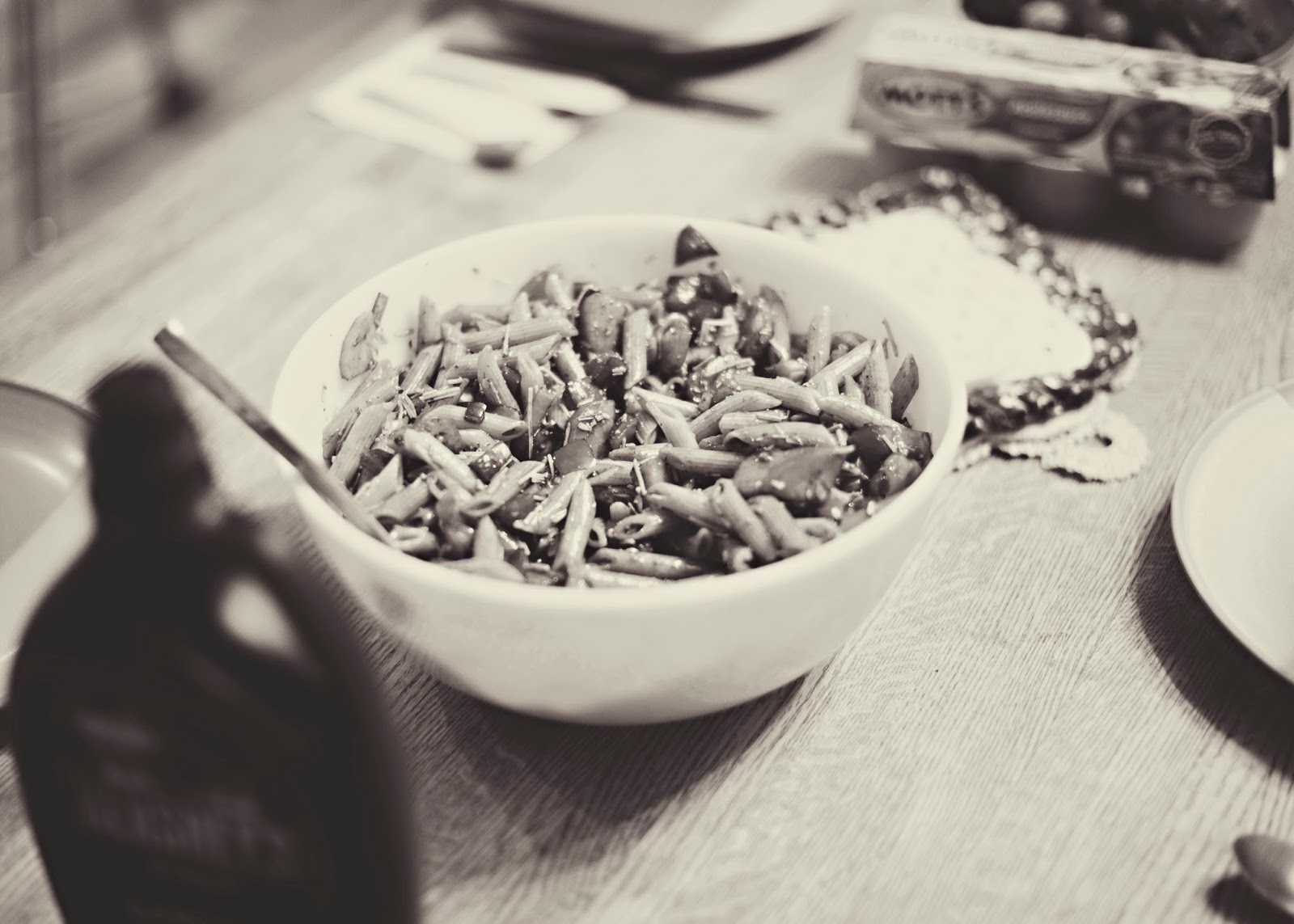 I decided though to make him some cupcakes anyway.  Candles don't exactly sit well in a root beer float.  I had those all ready to go when he got home from school.  He asked me, "Mom, what are these for?".  I got a kick out of it because it was pretty obvious they were for him! 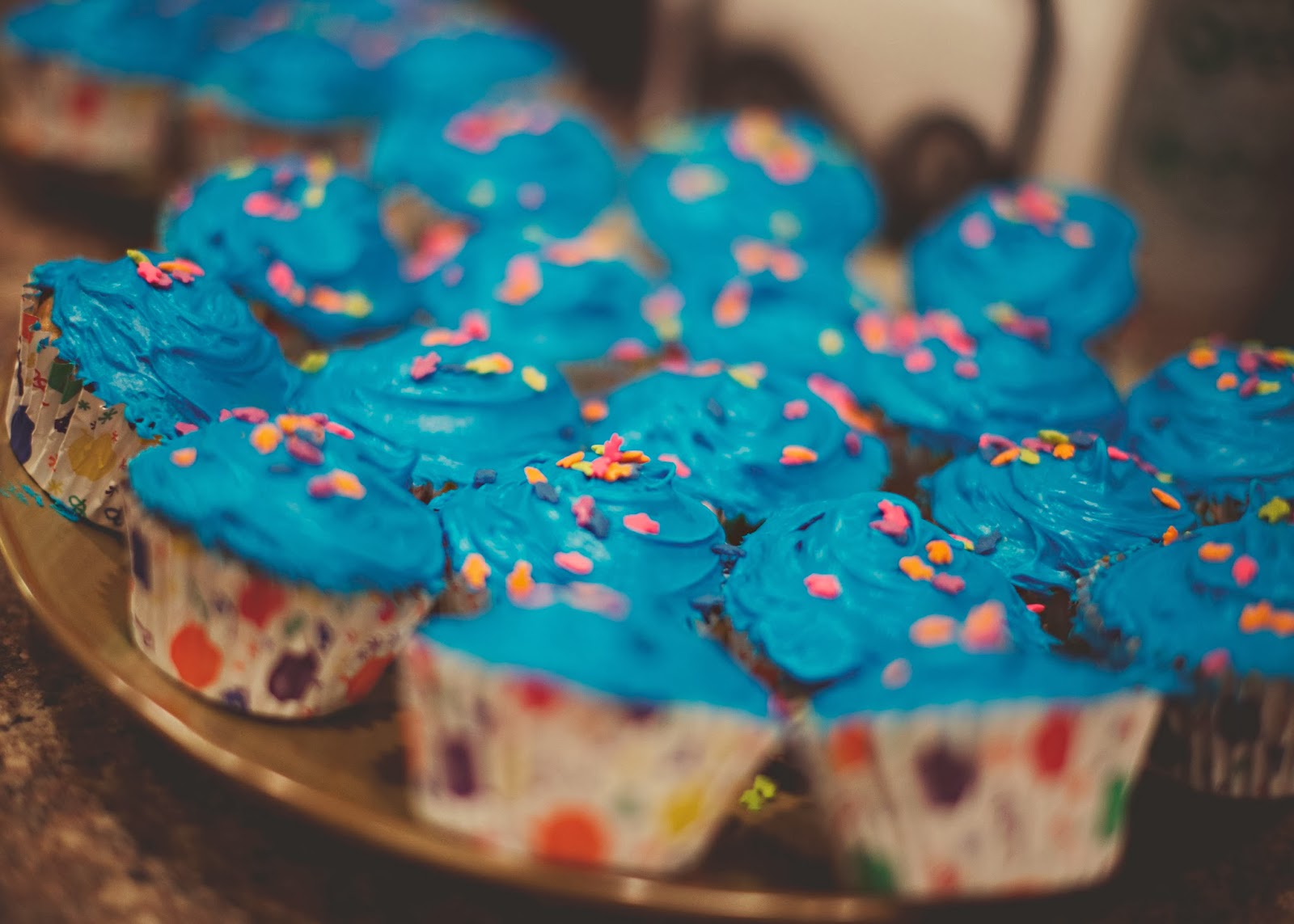 While the boys were off playing their games, I snapped a couple photos of my other trouble makers.  Quentin, of course, wants to always be up in everything.  Trying to "help".  Which usually ends up in some frustration on my part because he's grabbing just about everything he sees on the counter, all of which he most definitely shouldn't have.  But the little guy is so friggin' cute that you just can't stay mad! 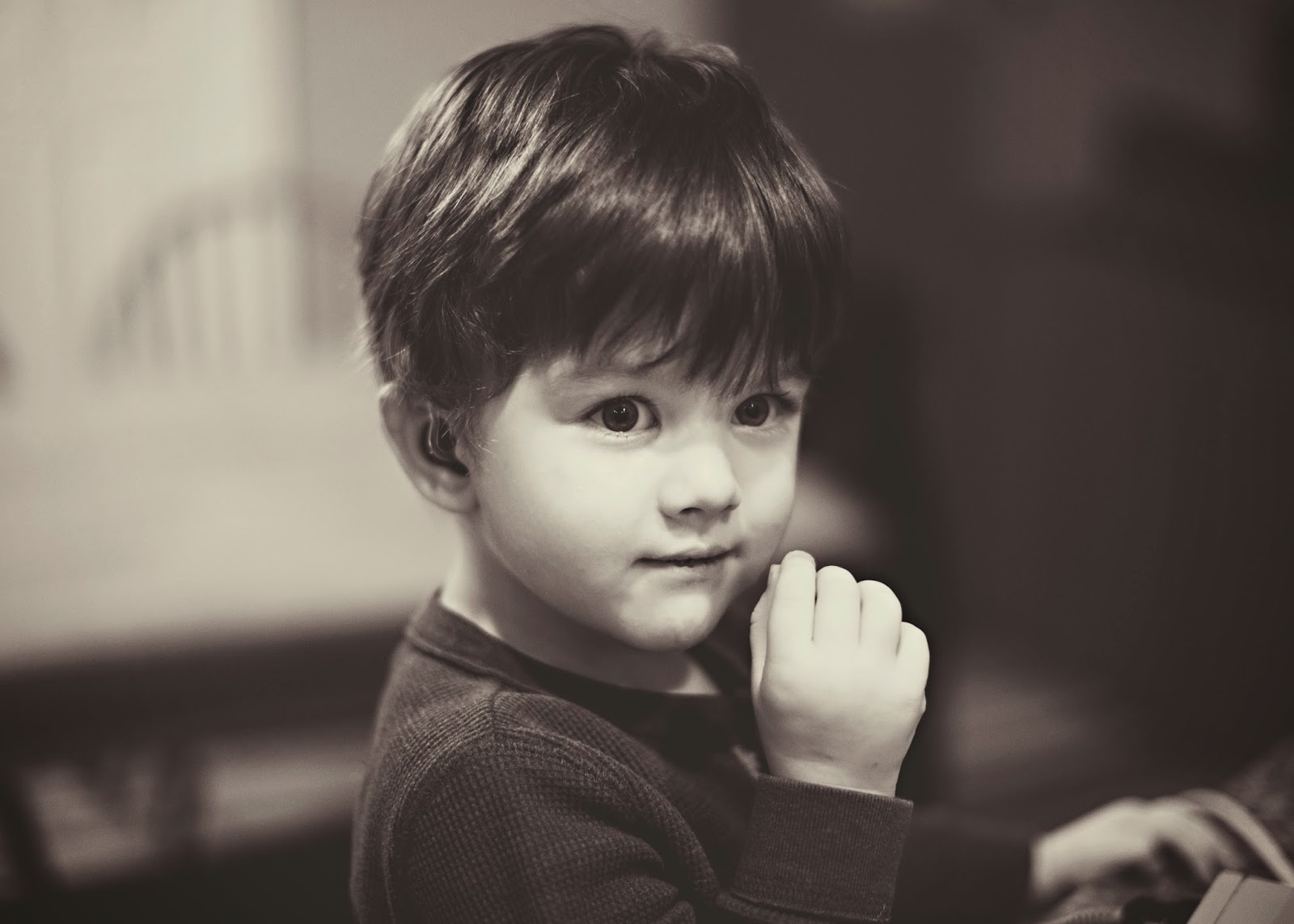 Then there's Miss Mallory.  She just kicks it in her high chair.  Checking out what's going on around her.  Chewing on her rings.  I can't wait until we can do all of this for her first birthday! 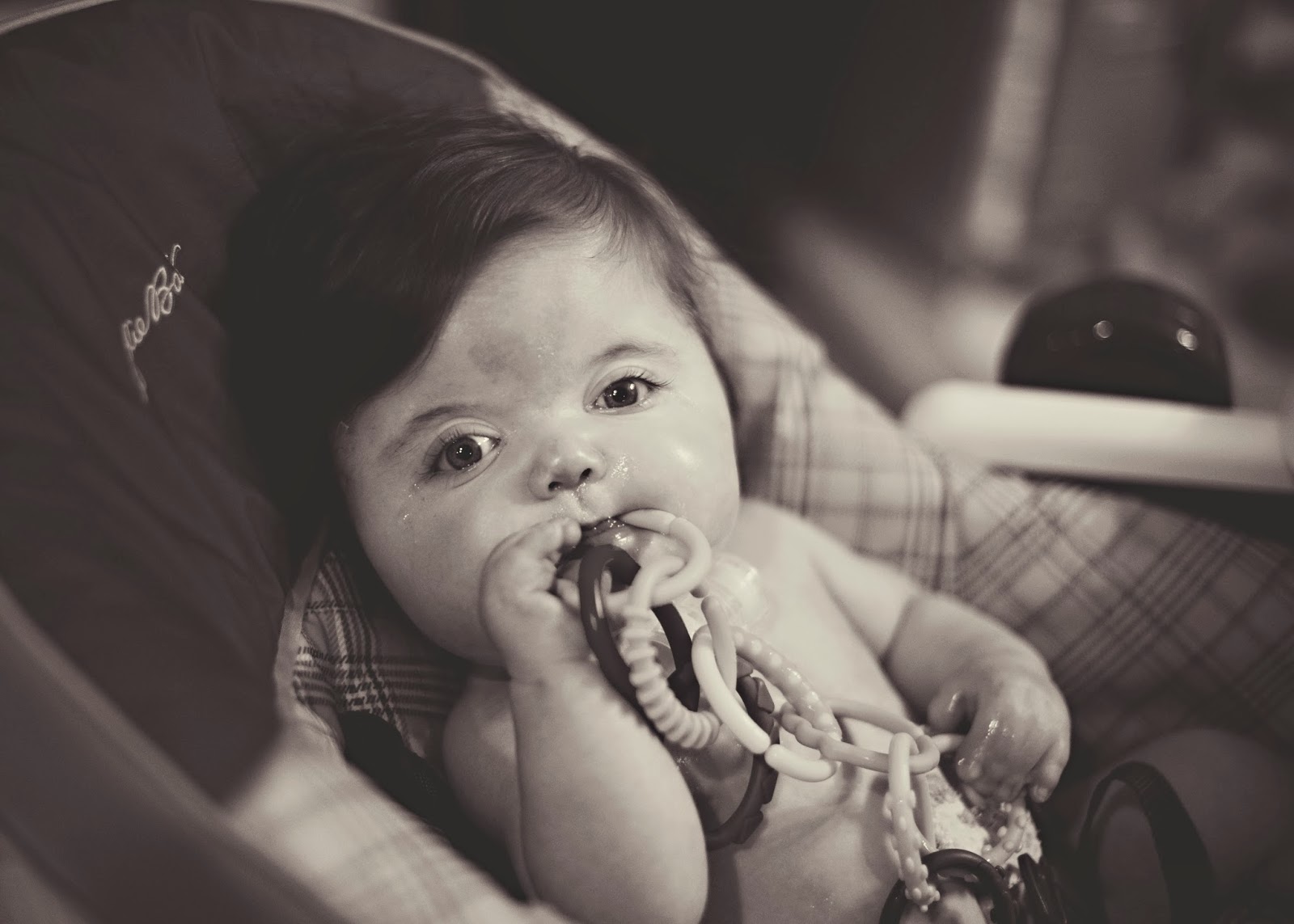 After Andrew's wonderful pasta salad dinner, we did his treasure hunt.  Another tradition around here.  It also helps save on wrapping paper!  We ask the kids in advance if they want their gifts wrapped or if they'd like a treasure hunt.  I don't think I've had any kid in probably five years request wrapping.  They LOVE the treasure hunts.  Andrew got some pretty cool stuff.  He got a coupe of the Halo Megablok sets he wanted, a Lego Galaxy Squad set he's been dying for, a Rainbow Loom book (packed with all the tutorials on how to make a ton of bracelets) and a Rainbow Loom storage container.  He was one happy kid! 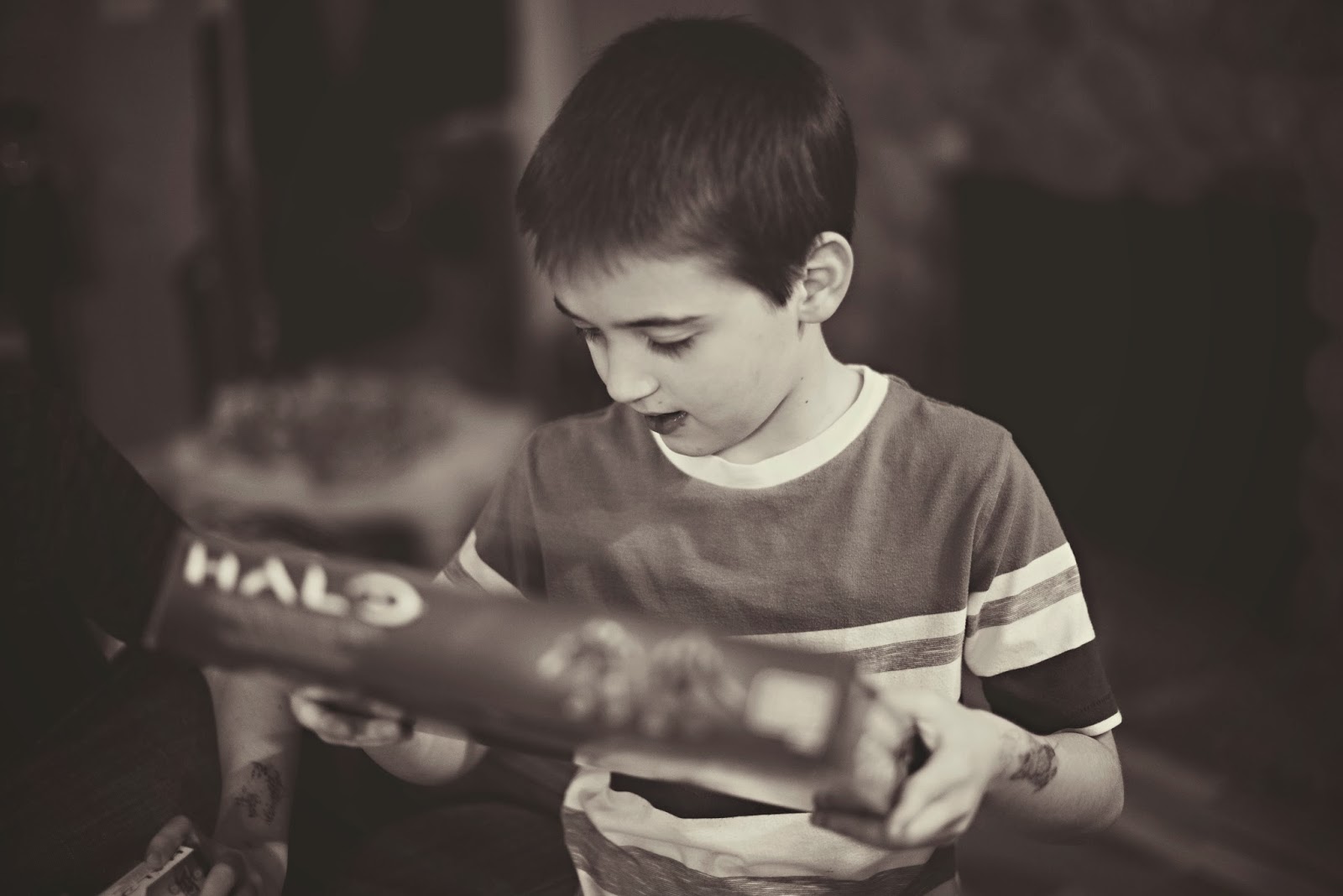 Once treasure hunt time was over, it was onto dessert.  All the kids really enjoyed the root beer floats.  I'm really glad he picked that! 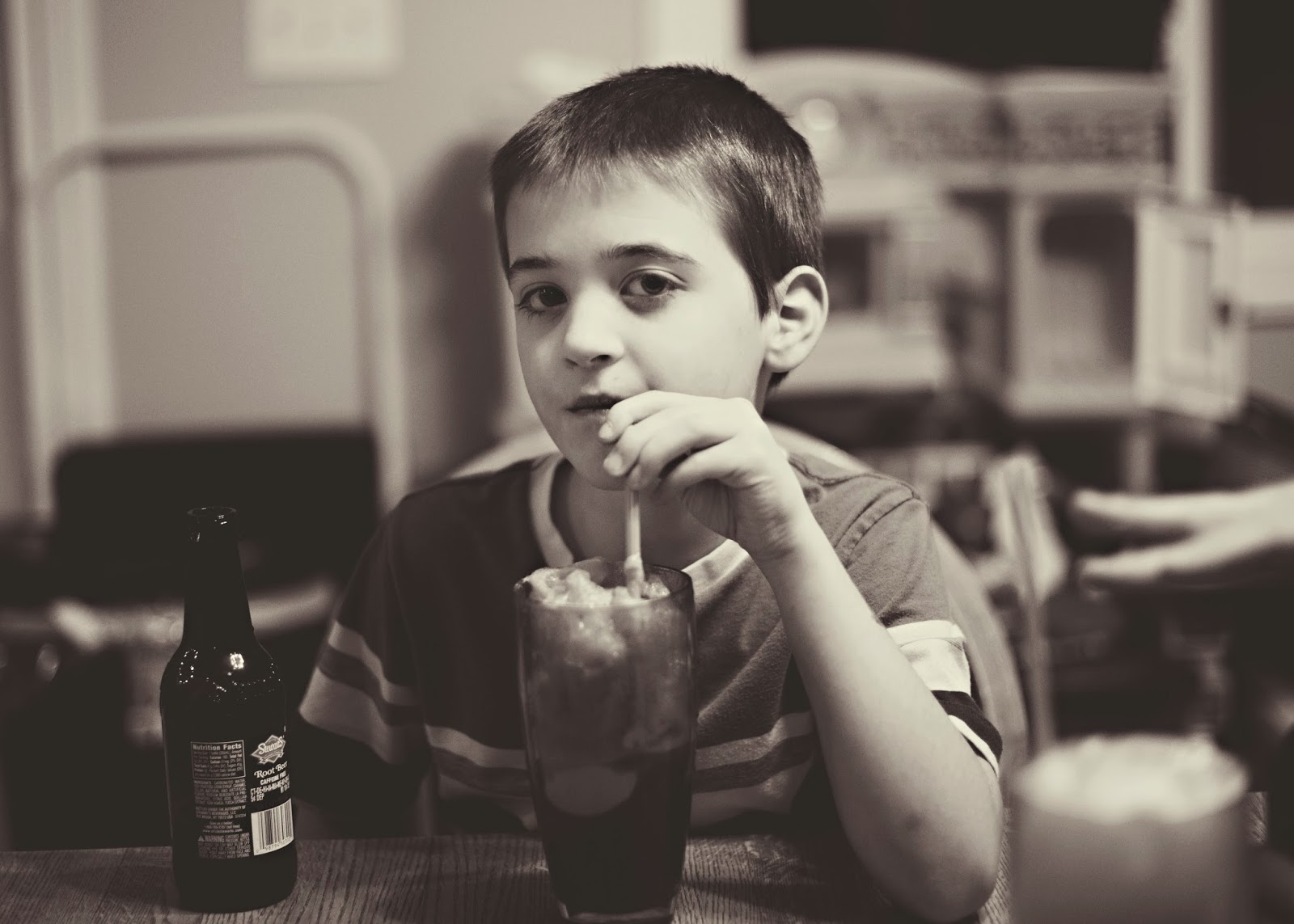 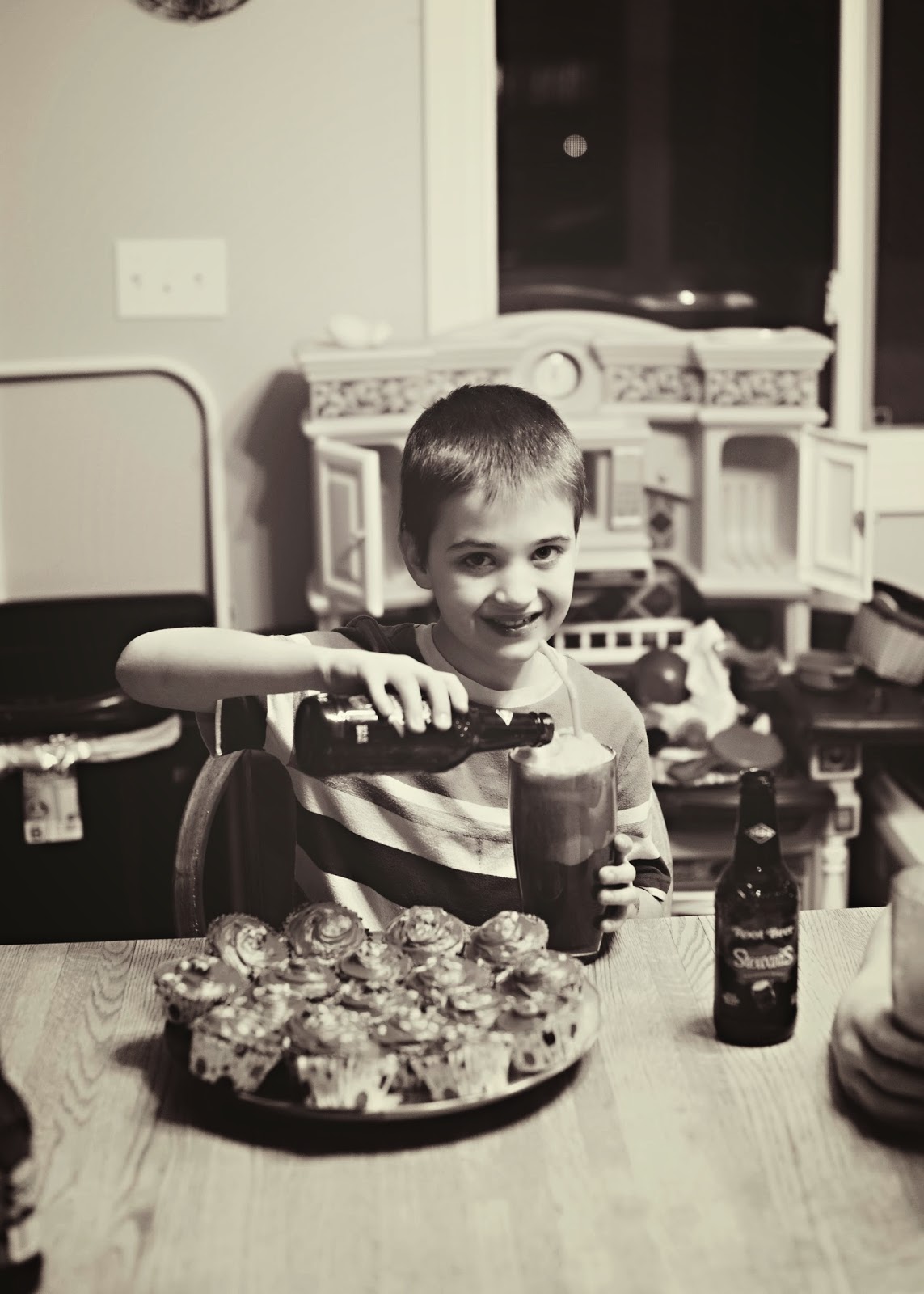 We sang happy birthday with a candle in his cupcakes... 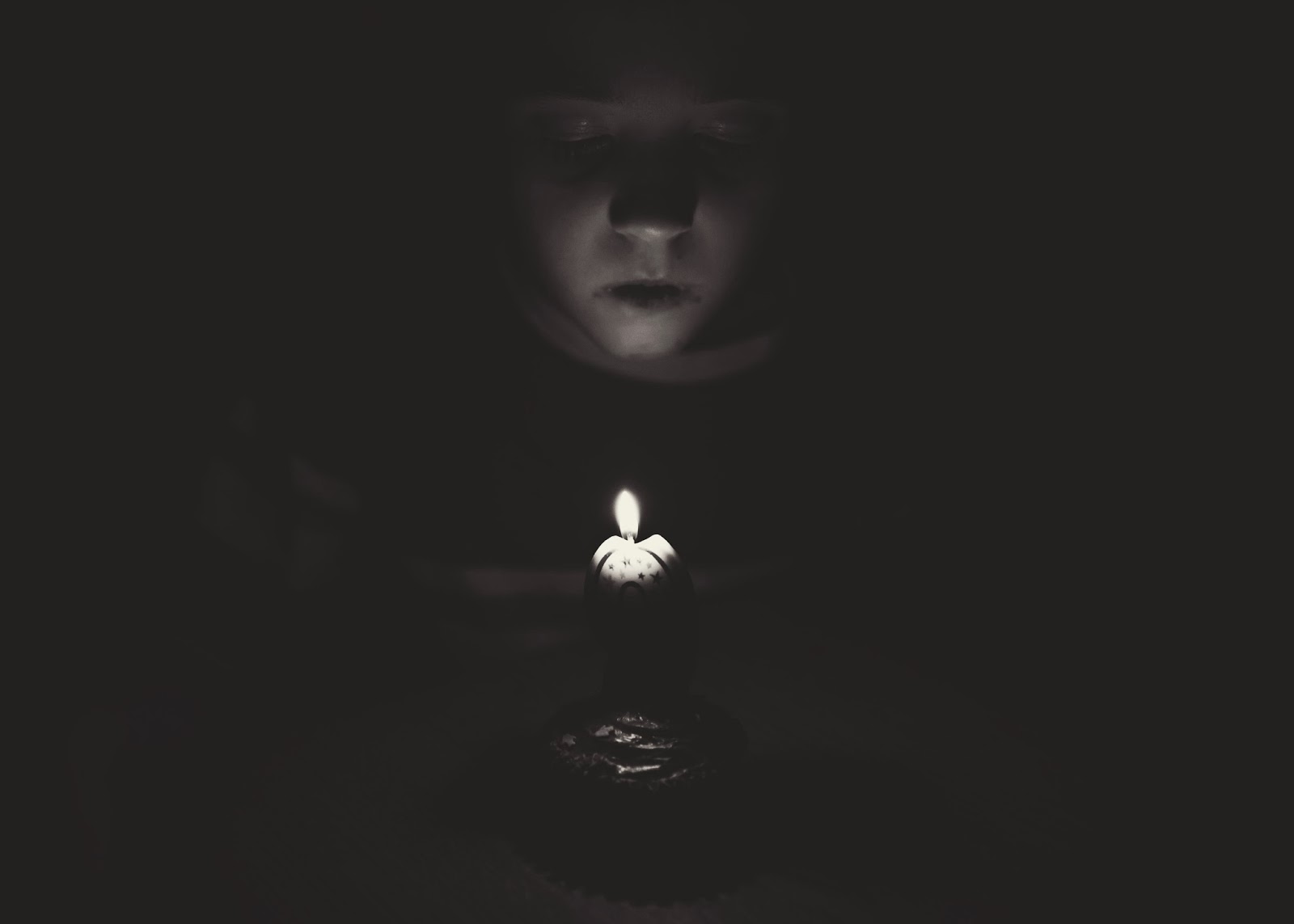 and then a final photo of the boys saying, "Cheers!".  Happy Birthday, Andrew! 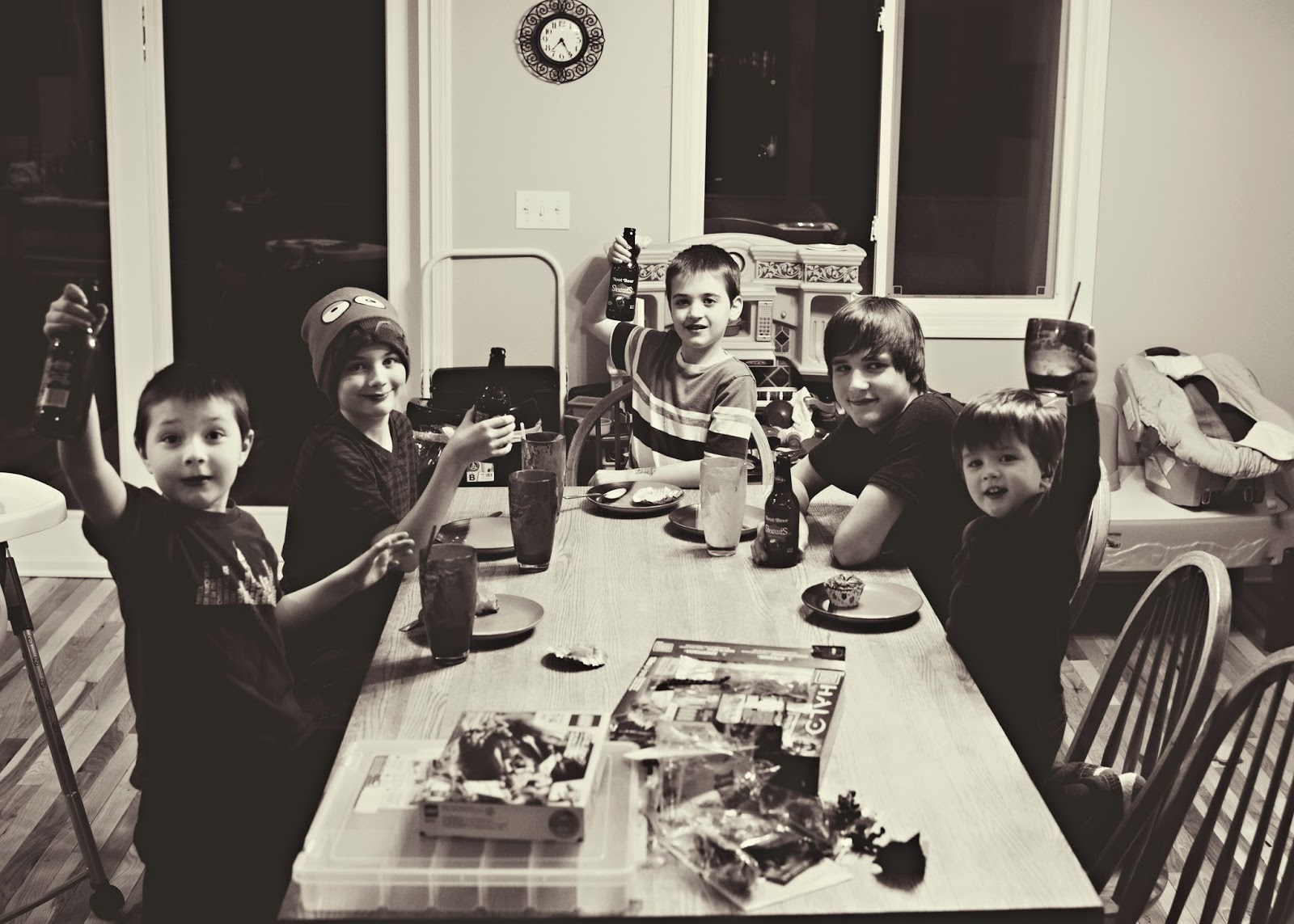