Today was an interesting day.  Never in a million years did I think I'd be taking my two year old in to be fitted for his first pair of hearing aids.  Although, we'll be calling them his super ears.  Much better suited for the little guy!

This all started a couple months ago when I took him for a hearing screening.  I had been concerned about his hearing for quite some time, especially since his speech is delayed.  I finally got him in and he failed the screening.  We were referred for further testing at Children's.  After a couple of appointments and various tests, we found out that Quentin has lost about half of his hearing.  We aren't sure why or how but we know that we can now try and do something about it.

When I was driving up to Children's this morning I wasn't sure what to expect.  Would Quentin be happy?  Would he be scared?  Would he cry?  Would the hearing aids work?  Would we notice a difference right away?  So many questions.

We arrived and this little kid had lots of spring to his steps.  In the waiting room he was hopping from chair to chair looking out the window at all of the cars.  Totally unaware that those things were about to get louder to him. 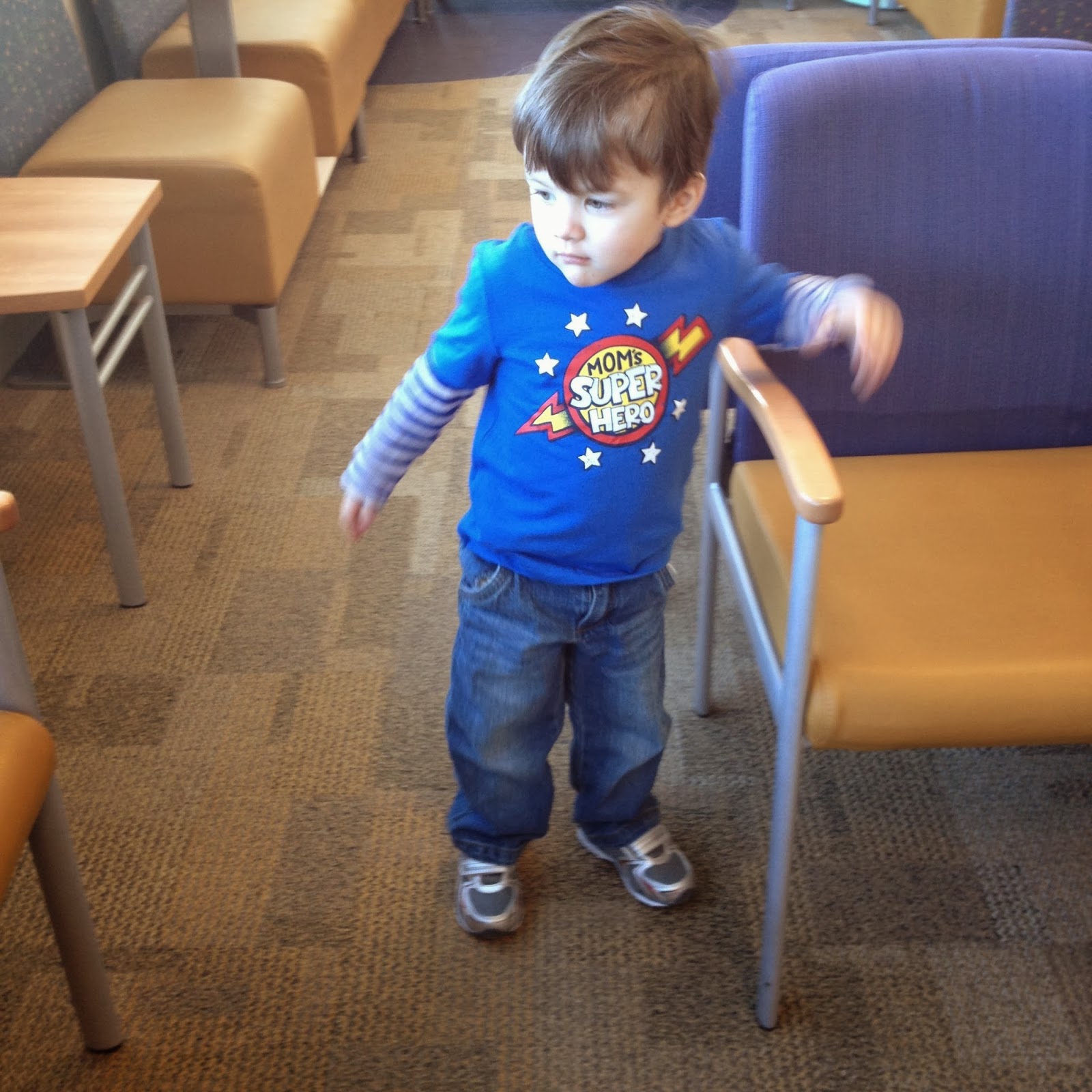 The doctor called us in and Quentin took off running.  He remembered from last time not to run too far ahead and would turn and check to make sure we were following.  He actually remembered the way to the screening room, which wasn't the room we were going to, but it was pretty impressive!

Once we got him reigned into the correct room, I began to learn about Quentin's new ears.  How to clean them, how to change batteries, how they would help him to hear better.  Then it was time to try them on.  One of the nurses took some video for me to share with Frank since he couldn't be there today.  This kinda sums up how he felt about it.

After the doctor tested them for some feedback I turned him towards me and was telling him what a good job he was doing.  I'll never forget the look on his face, it was confused but it was like it was the first time he was really hearing my voice.  I wanted to cry but I just kept on smiling so that he knew that this was a-okay!

I let him get down off of my lap and let him play for a little bit while I finished up talking to the doctor. 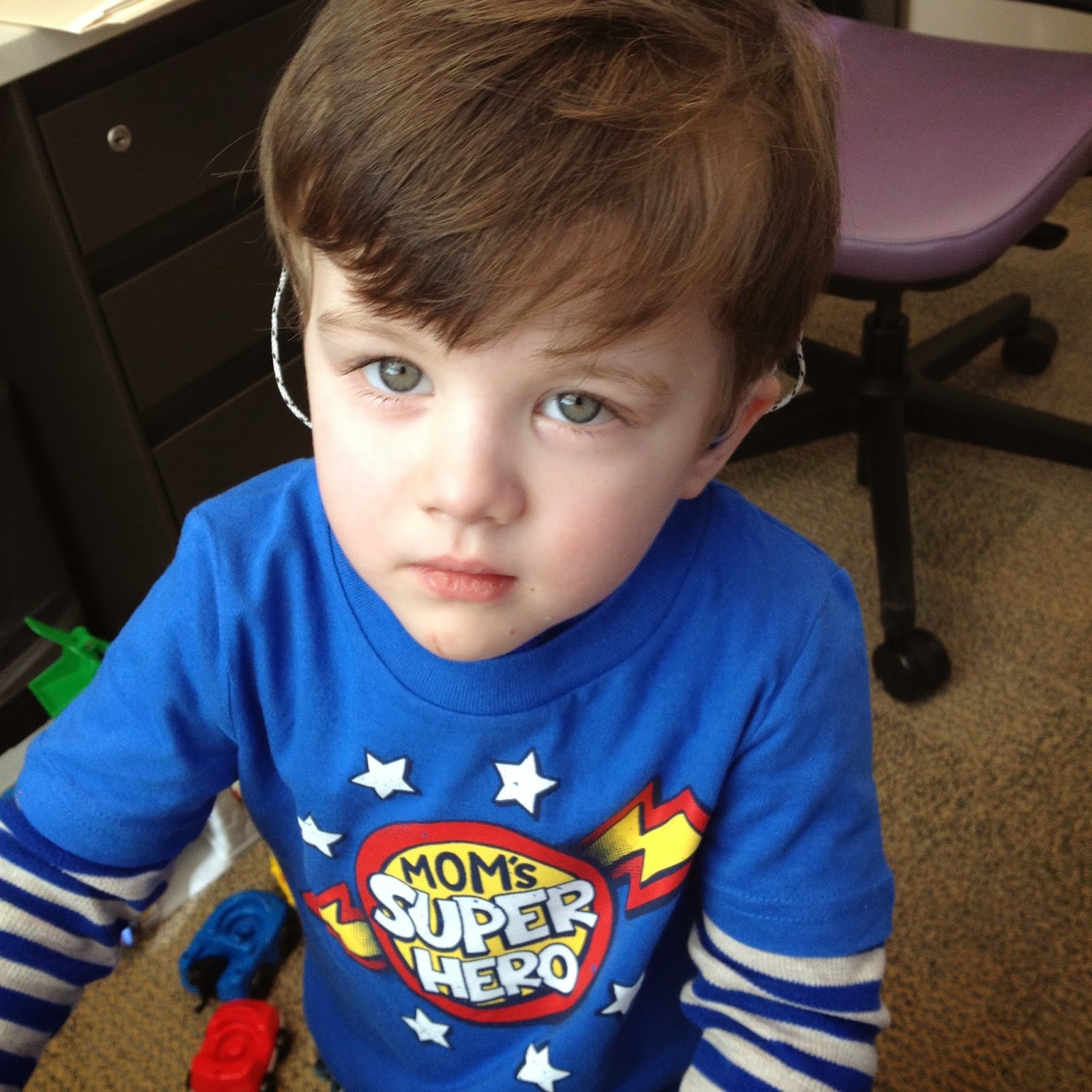 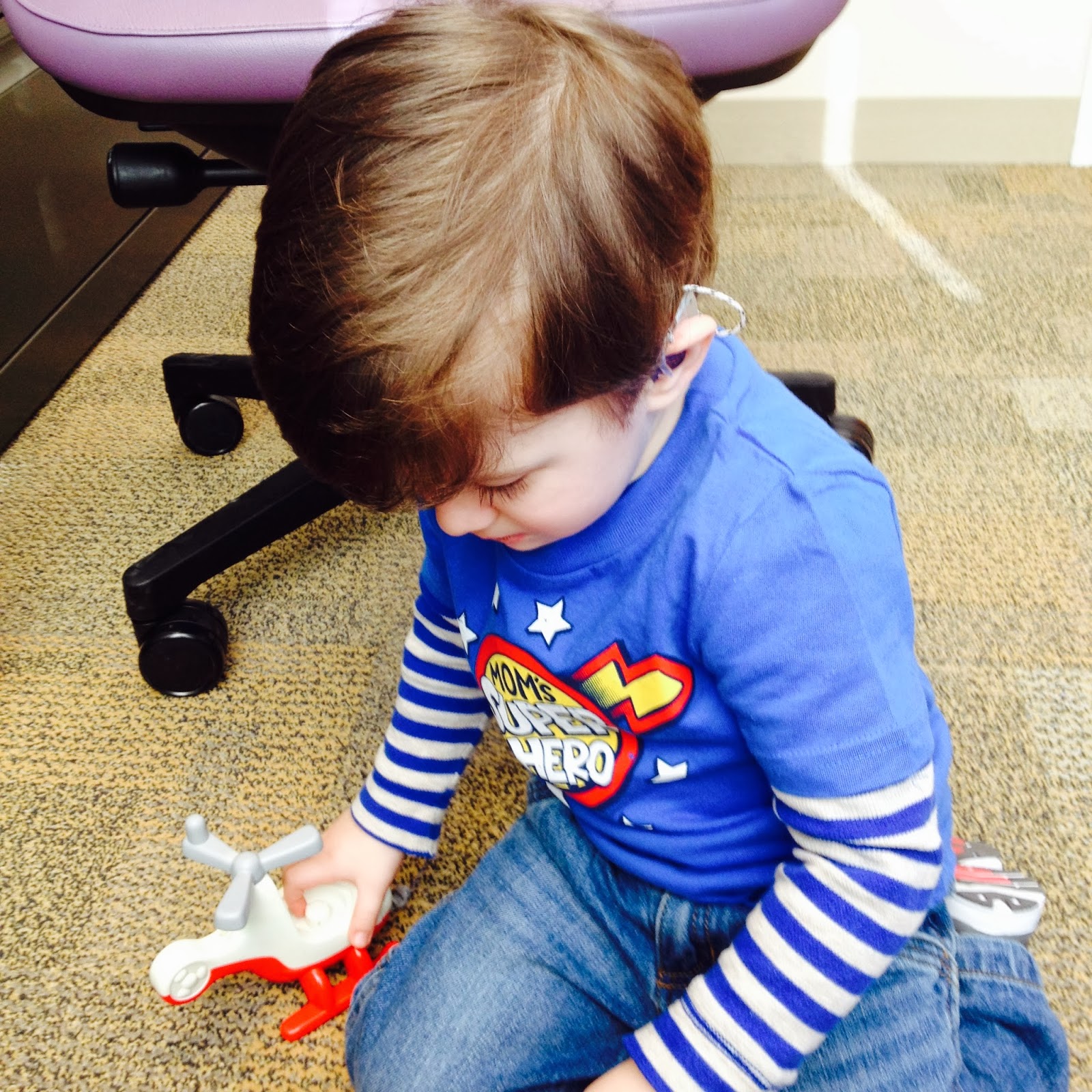 He pressed the button on one of the toy trucks in the room and was surprised to hear it make a sound. He had been playing with it before the hearing aids were put in and I don't think he realized it made noise.

When we finally left I still wasn't sure what to expect for the rest of our day.  The fitting hadn't gone all that well.  He wasn't pestering his new ears though, so I thought there could be some hope.

He fell asleep on the car ride home.  As a treat for being so good, I stopped at McDonald's and got him a happy meal.  He was all smiles once we got home!  (He got a really sweet cup from the Lego movie too!)  When I was going in and out of the garage door bringing Mallory's bags in he turned around every time and said, "Hi!".  It was awesome! 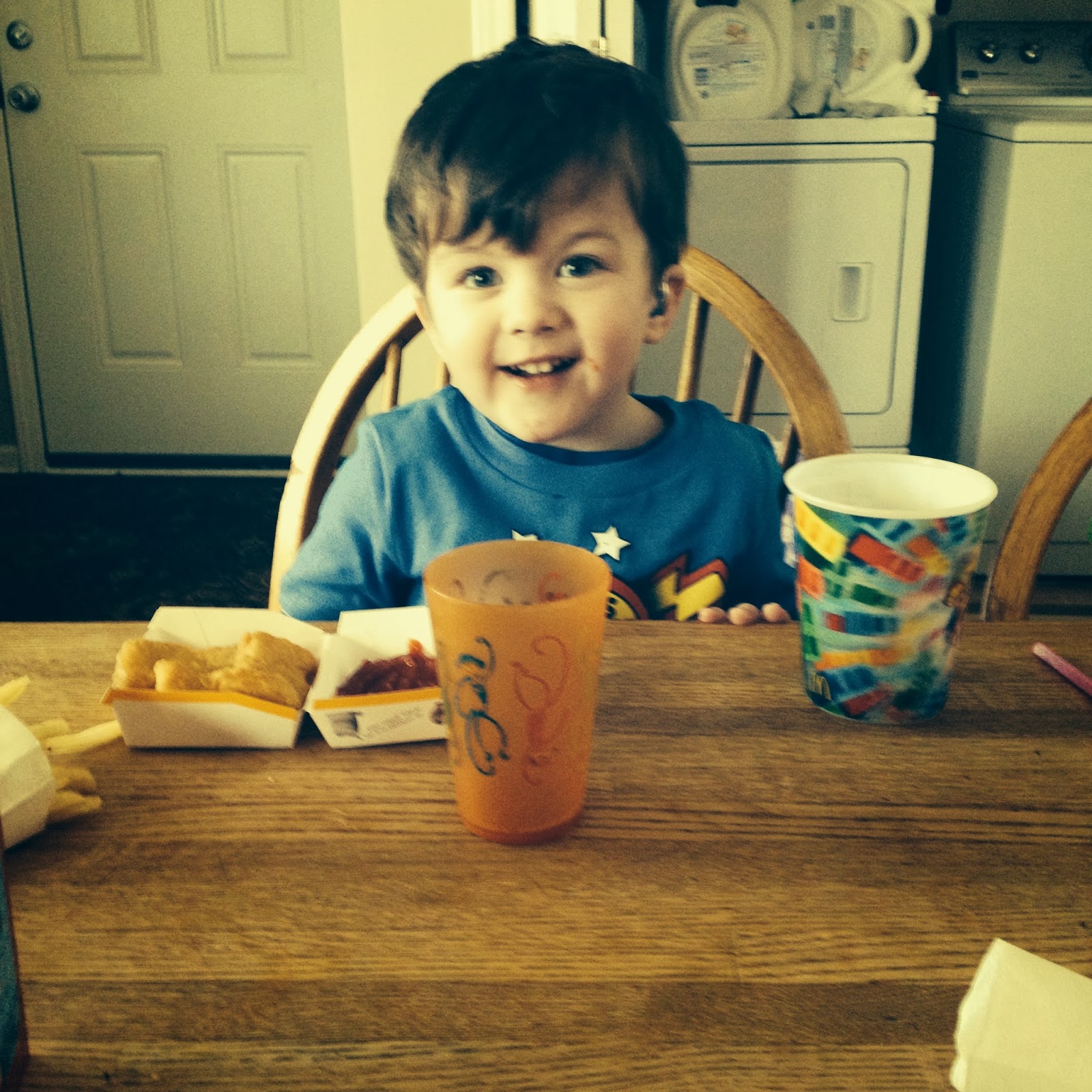 From that point on I spent some time trying to figure out how well those super ears were working.  He seemed quite happy for the rest of the afternoon.  I would ask him questions and he was actually saying "yes".  Something he doesn't do often.  I also noticed him trying to repeat things I was saying! 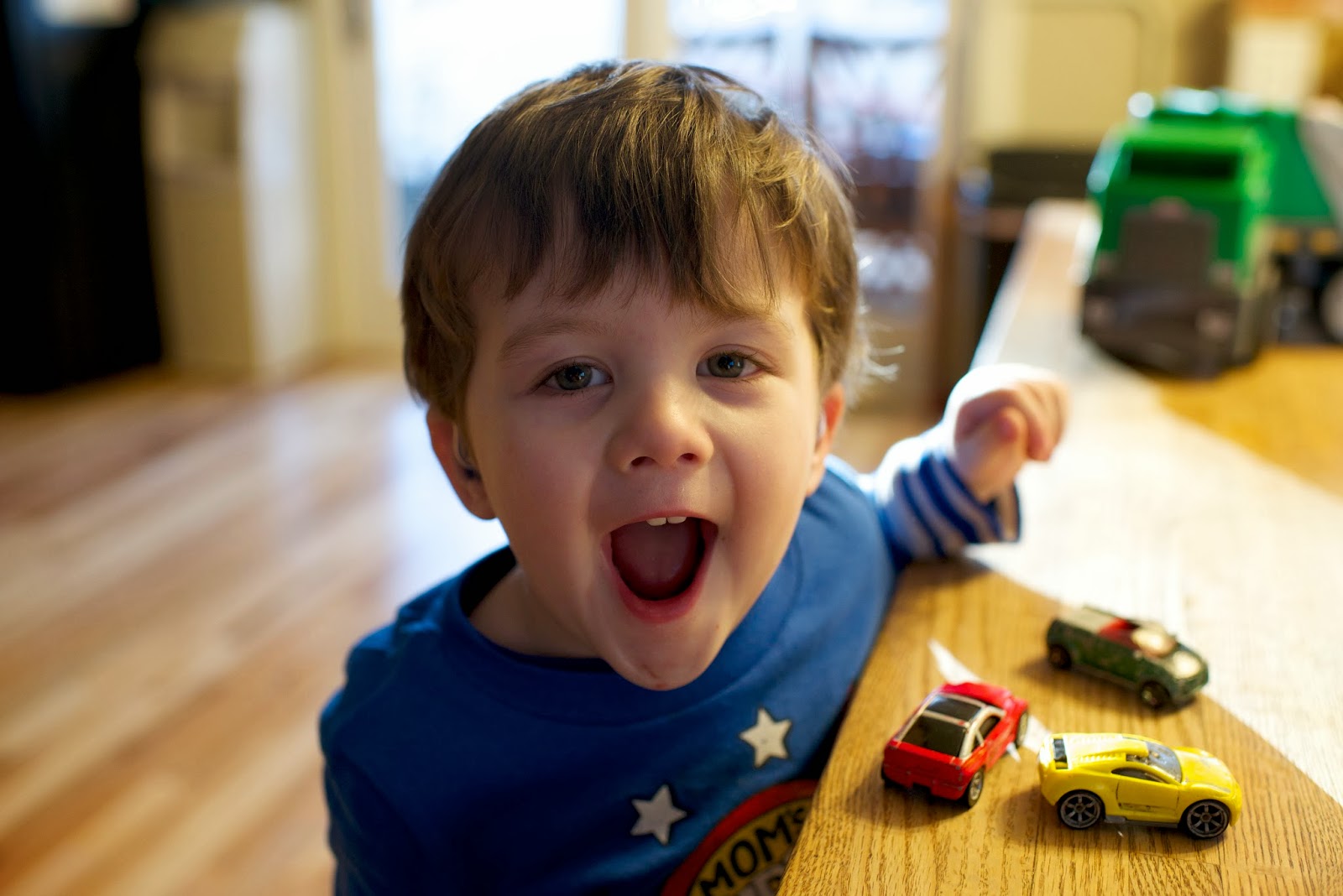 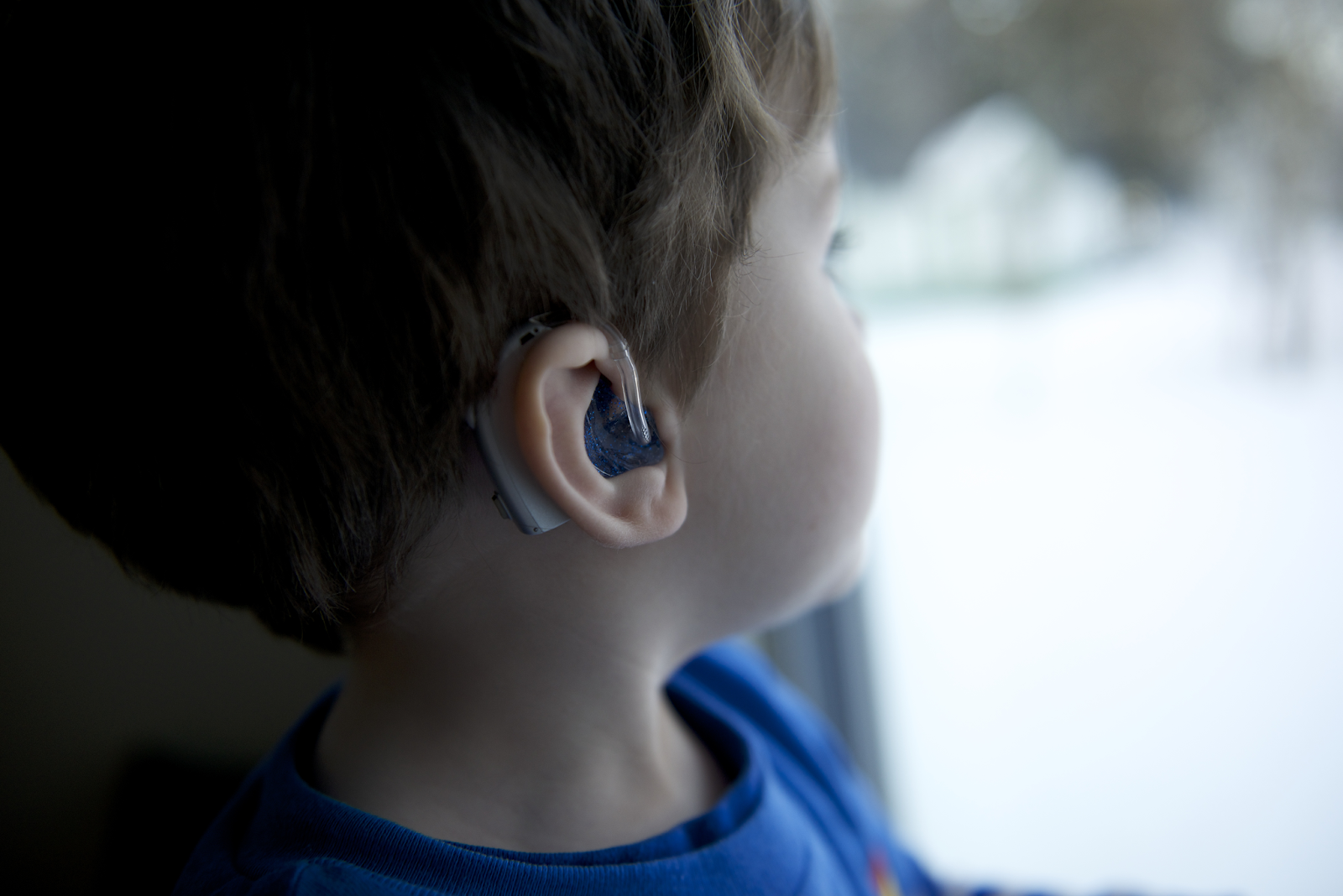 The icing on the cake of the day for me was at dinner time.  We had sloppy joes.  Tyler cut Quentin's joe into 4 pieces.  Quentin ate one and then started pointing at the apple sauce.  I told him no apple sauce until he ate at least one more quarter of his sandwich.  He whined and complained for a little bit, but then he did it!  I was so surprised!  Getting him to eat different things has been challenging but now I can actually give him options and he can understand!

There's still going to be a learning curve, I know that.  He points to his ears every so often and says "ow".  I'm not sure if something is actually hurting or he's just saying that because it feels different.  I'm hopeful though that this is the start of getting this kiddo talking much more and behaving much better too.

All in all, I saw a happy little Quentin today with his new super ears! 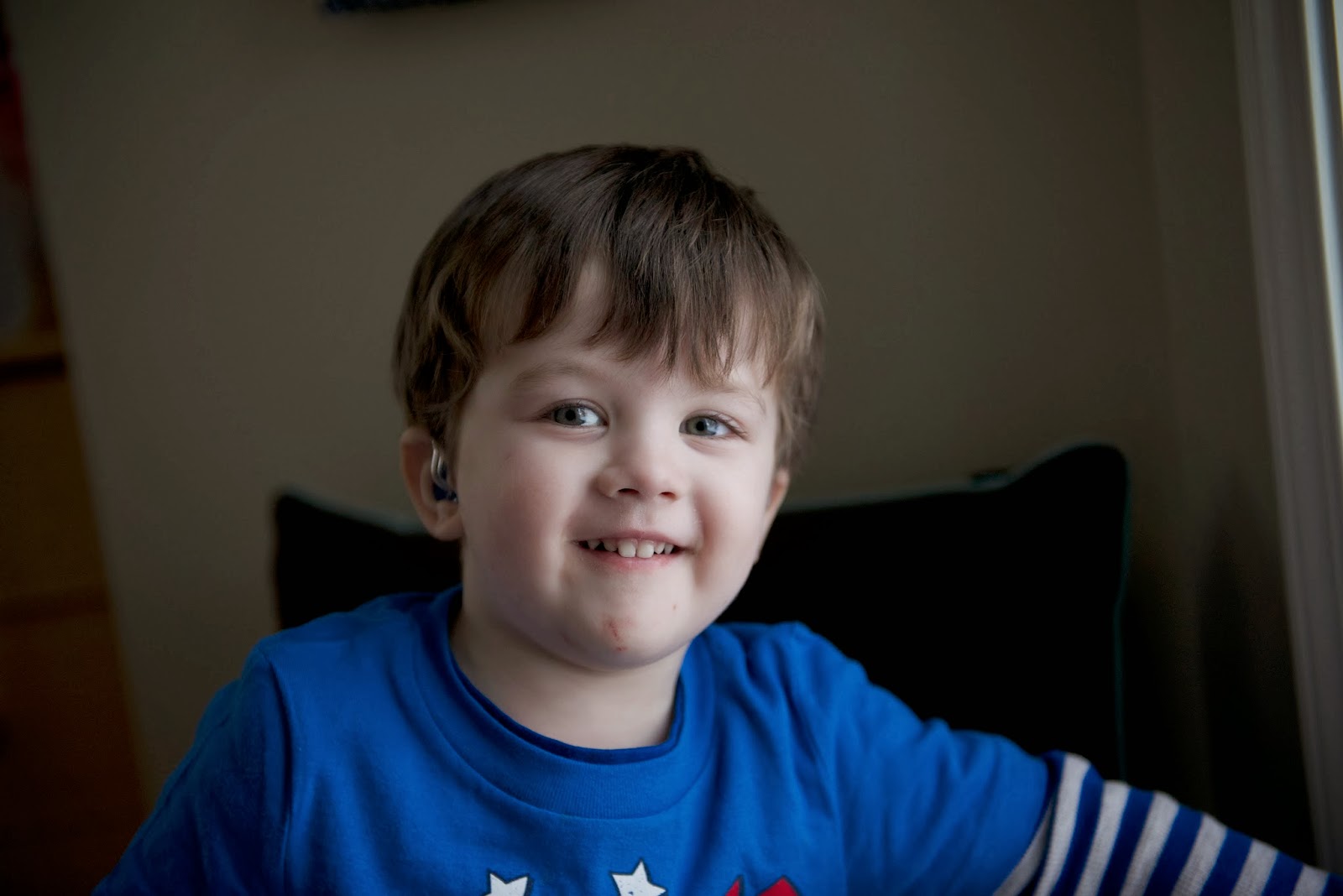 This brought tears to my eyes!