But, in true Cathy Broz fashion, I pick up my exhausted pieces every morning and prepare for my day.  Most of my day consists of Mallory related activities and rotating around her schedule, but Quentin makes sure he reminds me that he needs to be a big part of my day too.  Especially now that his communication skills are extensively improving.

When he first started wearing the hearing aids, I was really worried.  I would approach him with his "ears" in hand and he would shake his head at me, put his hands up and say, "no, no, no".  When I would finally get him to agree to let me put them in, he'd say, "ow" and whine.  I actually started to believe that maybe the hearing aids were a bad idea and we should start learning sign language so that we could teach it to him.

Despite his initial resistance, we started noticing differences pretty quickly.  He was trying out new sounds, he was responding to his name and even some of his jibber jabber was starting to sound more like words.  This probably won't be as big of a deal to others as it was to me, but I was amazed that Quentin wanted to start trying out new movies.  Before the hearing aids, he would watch the same thing over and over... back up to scenes in movies he knew and enjoyed.  But there was never any volume.  He was never hearing it.  Now, he picks out new movies to watch quite often and he's even discovering he has favorites!  He'll sit and watch something from start to finish.  Like a whole new world has just opened up to him.

In the past few weeks, putting in his "ears" has been less cumbersome.  In fact, if we don't put them in right away in the morning, he'll run and get the jar they are stored in and start pointing at his ears (his actual ears!).  I'm so happy that they are really starting to become part of his routine to him.  He doesn't whine or cringe anymore when I put them in.  He sits still and sometimes I even get a thumbs up when I'm done.  Then he takes off running to play in his new world, full of sound.

Right now he has a therapist that comes to see him once a week but once he turns three, which is in 11 days, he will no longer be eligible for the Birth to 3 program and will be moving over to the school district.  The evaluations I was talking about in that first paragraph of whining has to do with getting him set up for that.  People coming to the house, seeing what his current skills are and what he needs to work on.  Starting in the next few weeks, it's entirely possible that my little man will be bussed to a school about 20 minutes away to receive therapy there for 3-4 days a week.  It'll be great for him though.  Being around other kids his age and learning how to reign in all that extra energy.  I know it'll be scary for him too.  I can't imagine what his first day will be like.  Wondering why Mom isn't there and why he's around all of these strangers.  Can you say tears?  Yea... I'm sure I'll have more than he does.

He really has come such a long way in a short time.  I'm so proud of him.  He's embraced his new ears and he's really putting them to use.  I hear "Mom!!" a lot more than I used to.  He's starting to count now.  The other day, after he finished his sandwich at lunch time, he said to me, "want Goldfish?".  It was awesome.  Every time I hear him break out something new, I want to cry.  It makes me so happy that these new "ears" of his really do have super powers.  To help him hear.  To help him grow.  To help him become the best Quentin he can be.

On a less sappy note, I do have a funny story!  Last Monday we had a follow up with Quentin's awesome audiologist at Children's.  After we were all done, I took him and Mallory to Target for some light shopping.  (He of course suckered me into a package of Cars, which he had half opened before we got to the register!  And when I say "suckered" I mean that I brought him down the toy aisle and let him pick something!)  I had Quentin in the front of the cart and Mallory in her car seat in the back part of the cart.  Mallory was sound asleep.  Quentin decided to turn around and start bothering her.  I told him not to bother her because, "Mallory is making ni-night.".  Of course, in response, in his loudest voice possible, he says (and this is how he says her name), "Malwee make ni-ni!".  It was so friggin' adorable!

When we finally headed to the register and I had gotten everything unloaded from the cart the cashier and I were having some small talk.  Again, in his loudest voice possible, Quentin looks at the cashier and says, "Calm down!".  It was as clear as day and probably the funniest thing ever.  Not to mention, this particular Target is probably the least busy and quietest place I've ever shopped.  The cashier looked at him with surprise and said, "Calm down?  We're not throwing a party in here!".  I've never heard him say that before.  Ever.  Most parents, including myself, get to experience their kids do things like that when they are maybe 12-18 months old.  I've waited a long time for this little guy to surprise me with new words and phrases.  Things he hears us say... and yes, "calm down" is a frequent phrase around my house.  I was so amused and excited all at the same time.  And when he shouted, "Bye, bye!" to the entire store when we left it was just the icing on the cake!

So, that's how Quentin and his new ears are doing.  Pretty spectacularly.  I'm excited that he's picked up so much in the month and a half he's had them and I can't wait to see how much more he's learned in the next month and a half!!! 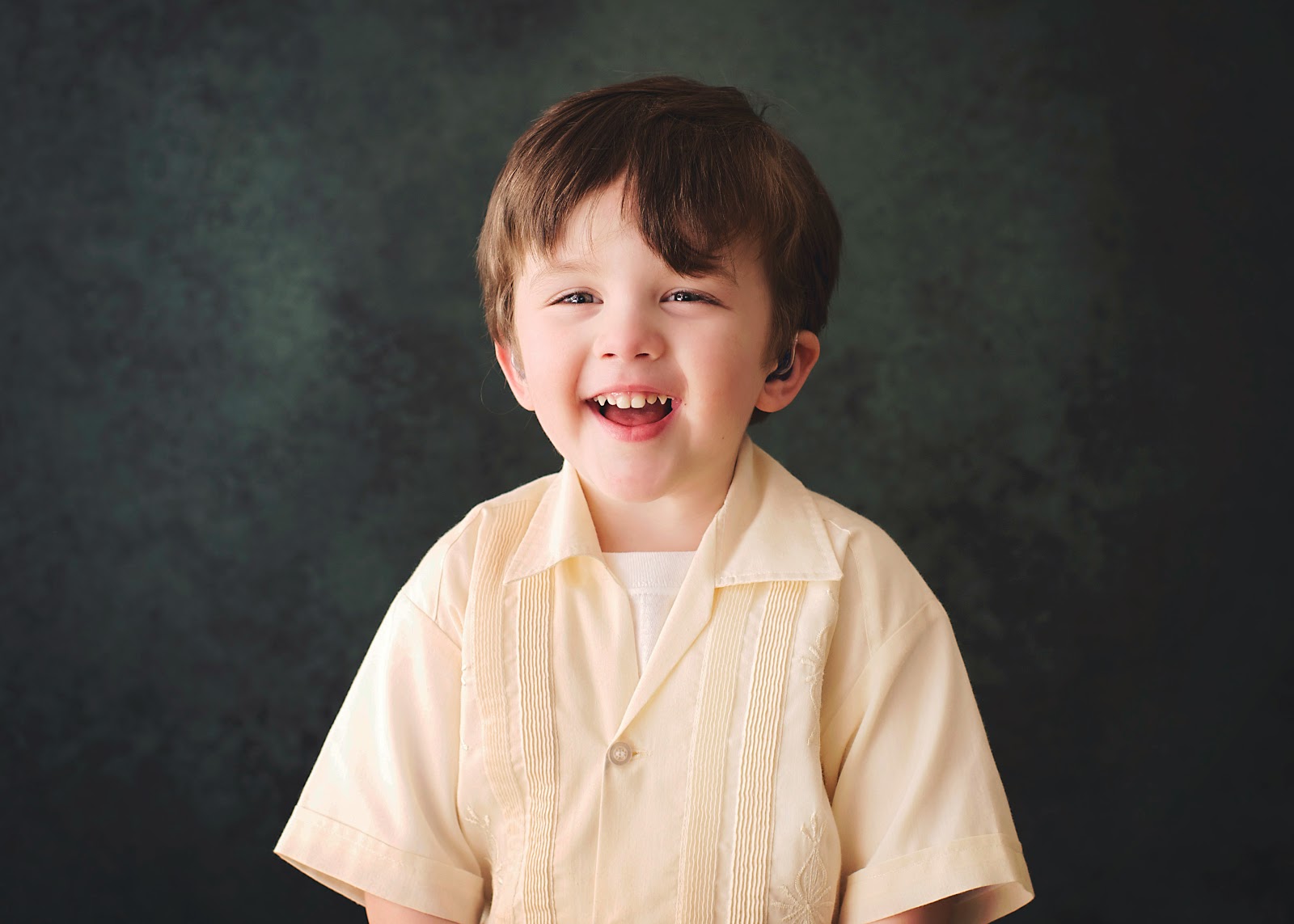