It's been a very busy week here in the Broz house.  Frank spent just about every ounce of free time getting the kids' new play set ready to put up.  I can't tell you how excited I was when we ordered this for the kids.  It was something I've always wanted to do for them and we were finally able to make it happen.  Oh, and I totally love to swing, so it's for me too!

When the tower portion went up there was literally glee inside of me.  I'm not an overly glee expressing person, but I just want to climb up there and have a picnic.  I'm not even joking.  But there wasn't a floor yet.  So sad. 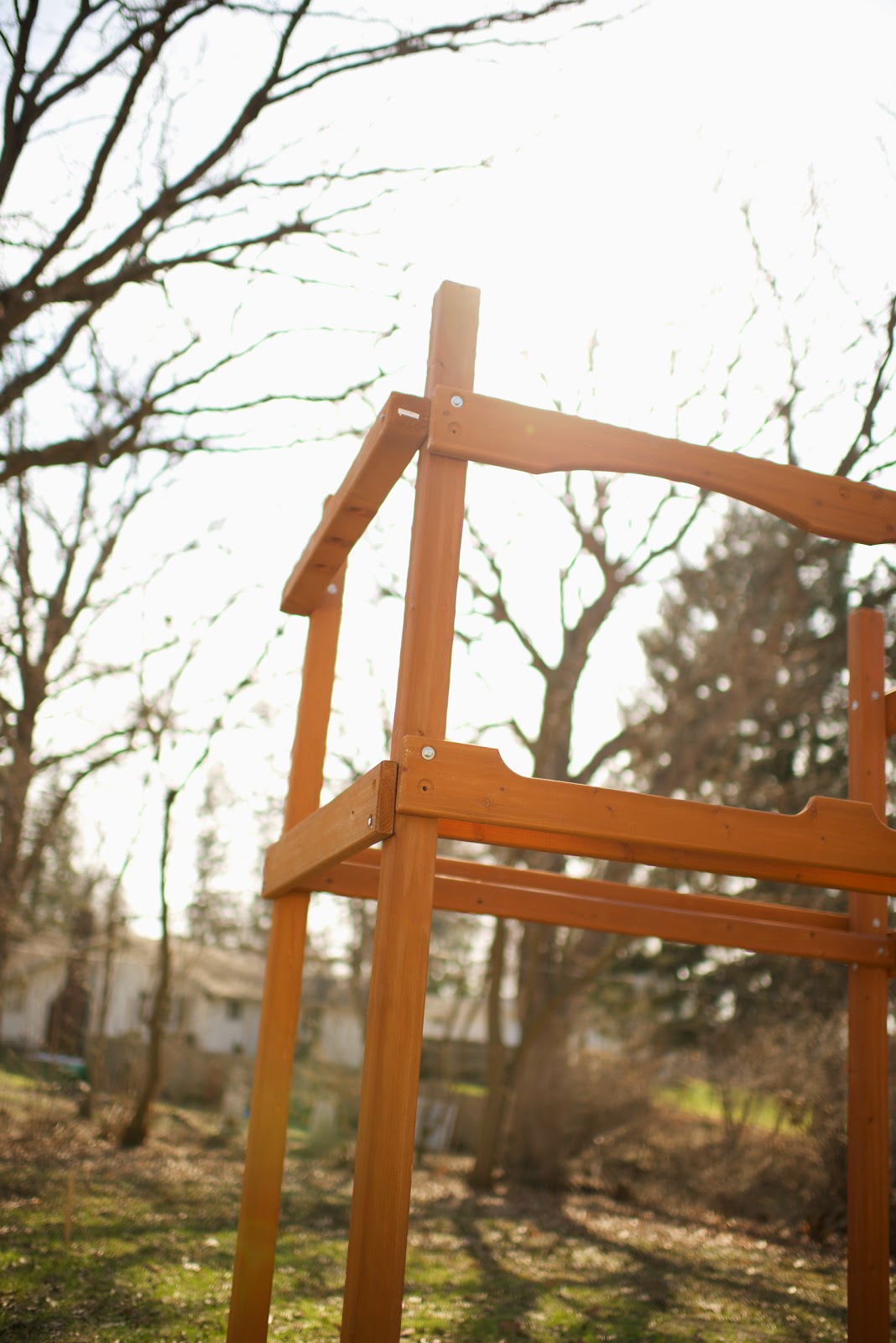 Instead, I preoccupied myself with other things.  Boring things.  Laundry.  Dinner.  Cleaning.  The kids at least got to jut around on their scooters.  Maybe I should try that some time. 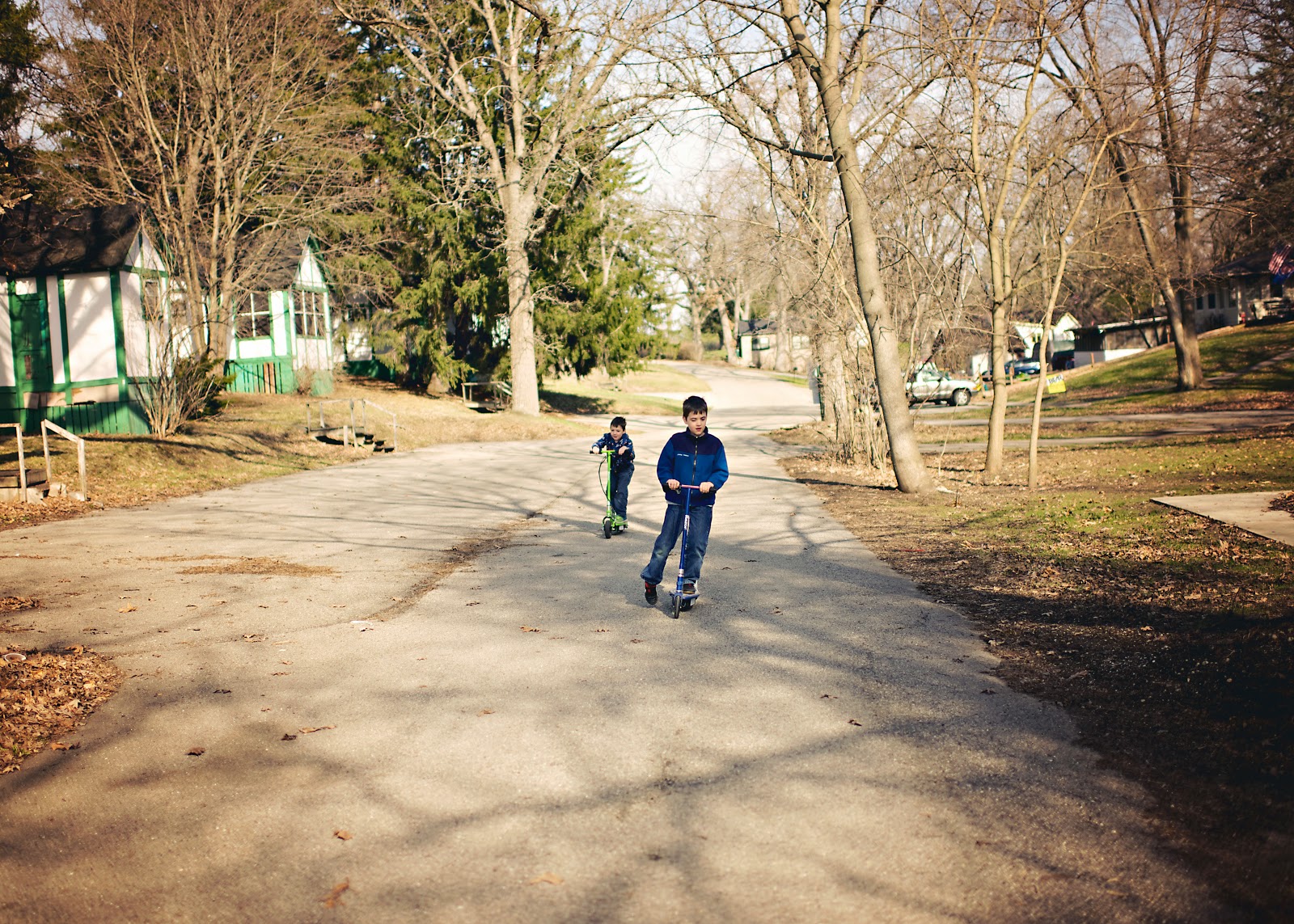 On Friday, the kids were off school.  Frank was off of work.  So, the idea was progress to be made on the play set.  All the kids were pitching in.  I was inside editing photos and getting ready for a newborn session.  Frank shouted out to me to bring my camera outside.  Quentin was helping to carry boards around.  He was so excited and shouting "C'mon!" to everyone.  I think he couldn't wait to see what was being built for him! 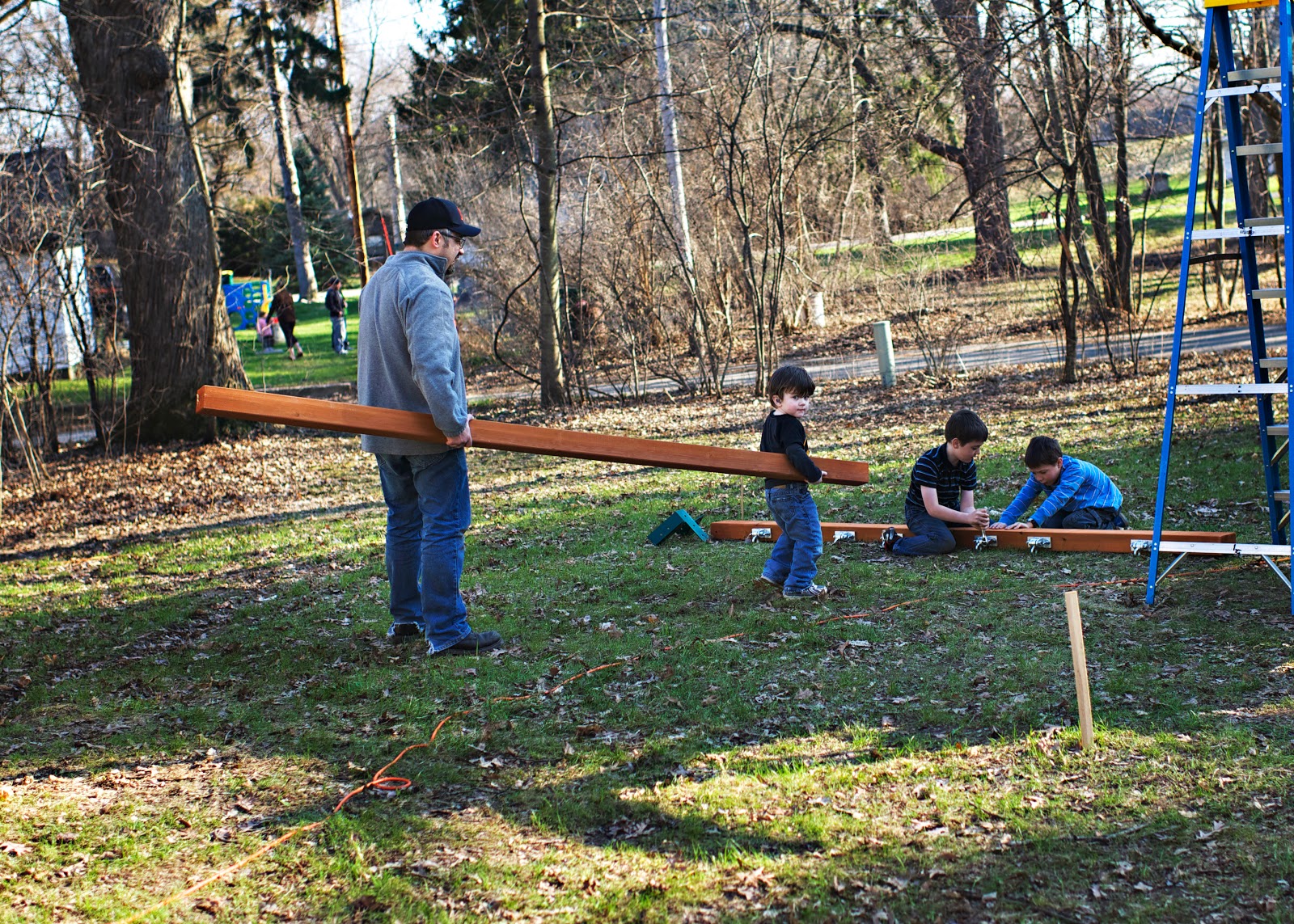 Come Saturday, play set building was in full swing.  We knew we were having company for Easter and wanted to have it ready.  I wanted to have our screened in porch cleaned up too.  So while Frank worked on the play set, I worked on the porch.  It was amazing how fast everything went and I have to say, I was really proud of my boys.  They are so smart.  They stepped up and helped their dad get this thing up.  They helped him measure, they got him tools, they tightened screws... proud Momma! 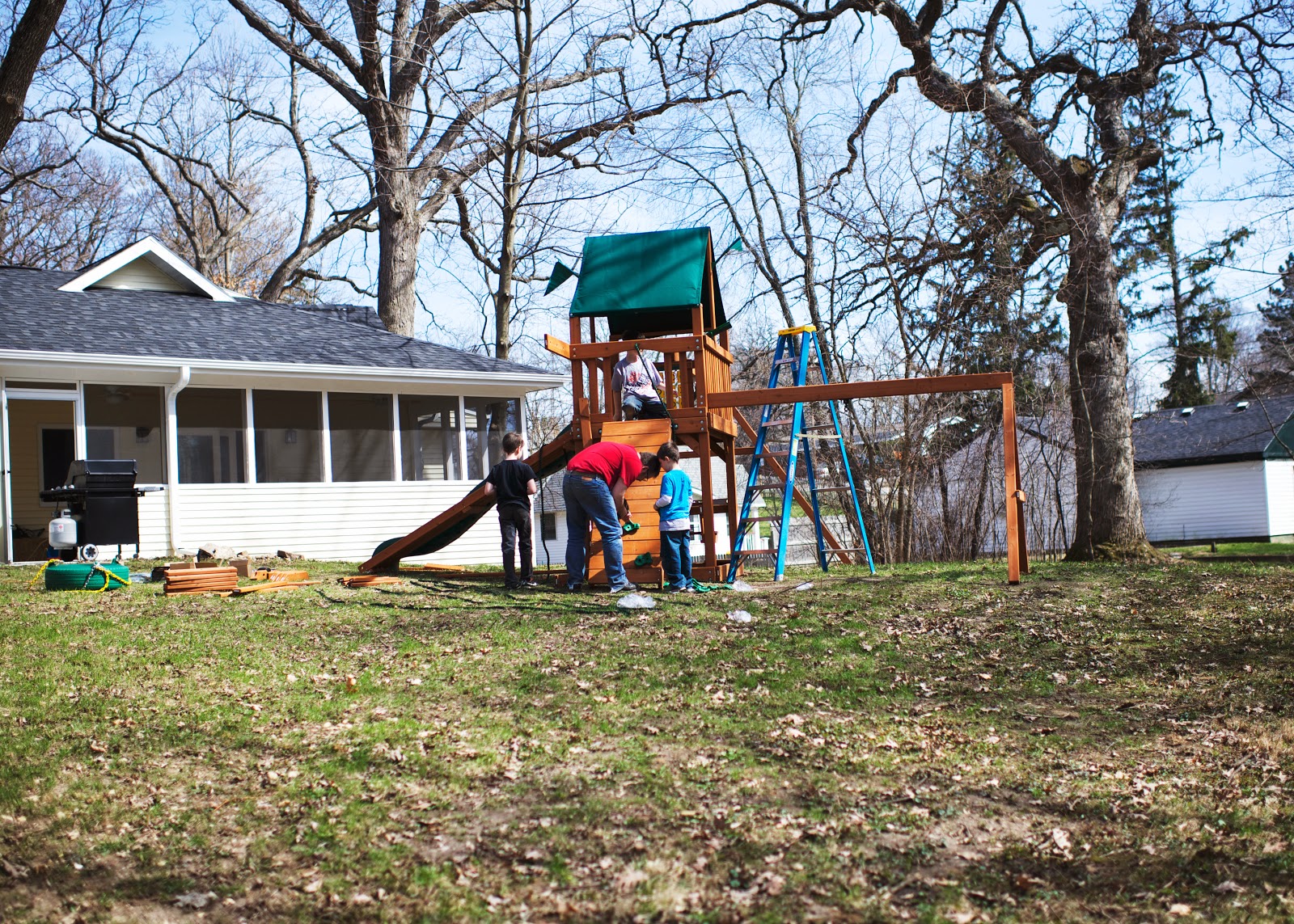 As pieces started to go up, the boys were taking full advantage!  But it was great to see them so excited about something!  They were so excited they were shouting... and I mean friggin' shouting... Disney songs.  "Under the Sea" was a favorite.  I was almost embarrassed.  I would have been if I hadn't been inside the house dancing to 90's music... like the Spice Girls.  But hey, Mallory enjoyed my singing as she was enjoying the nice, clean porch! 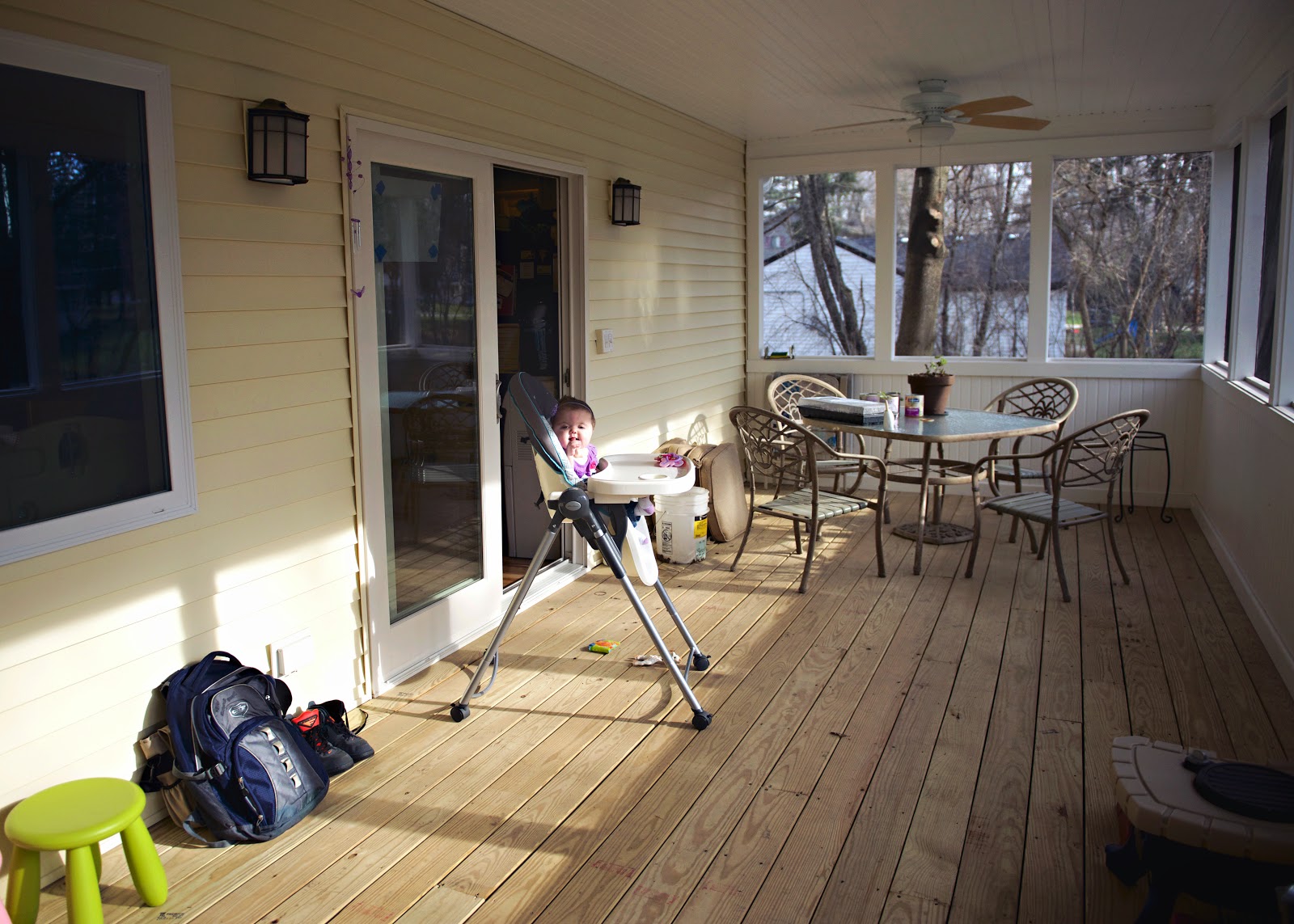 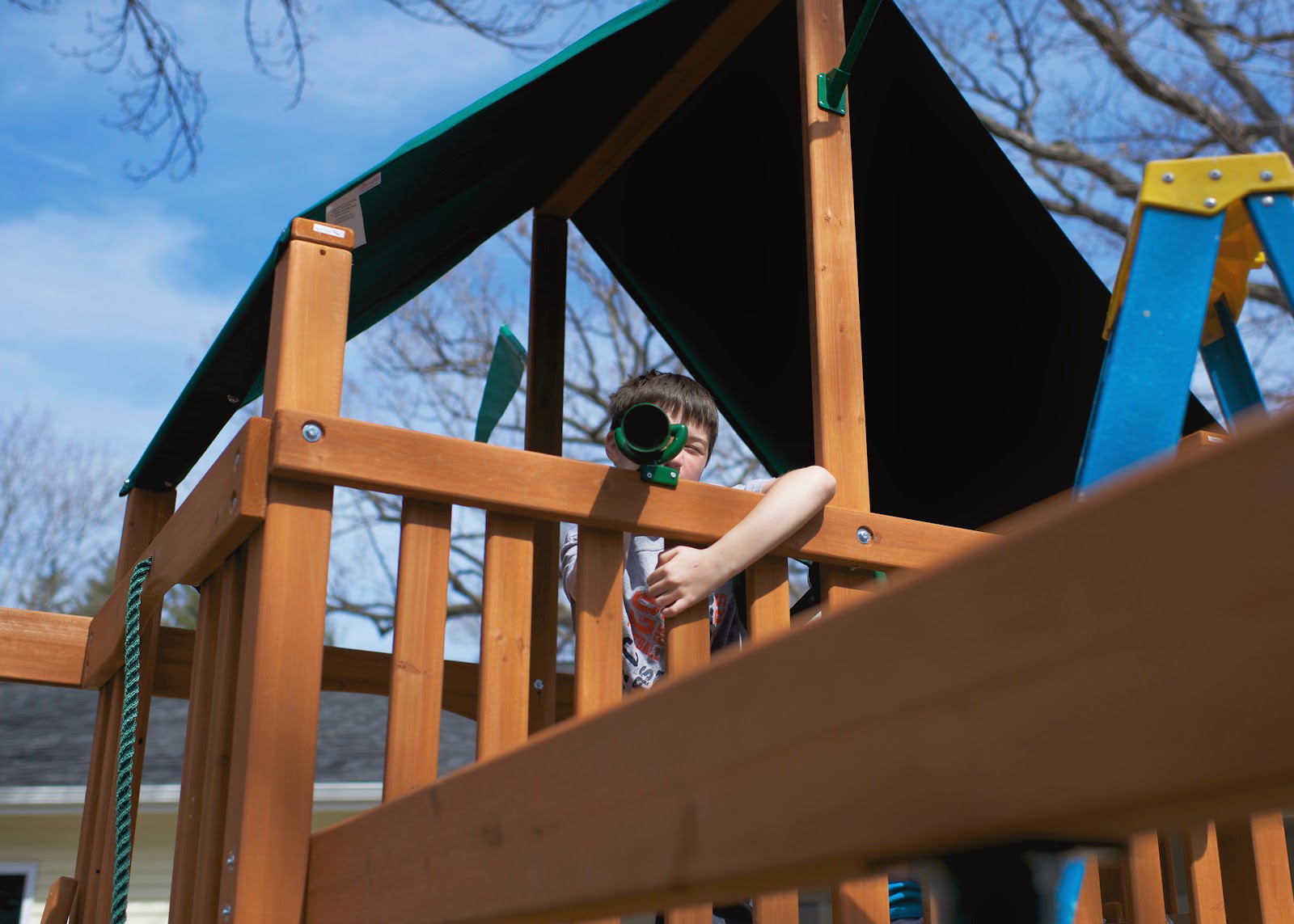 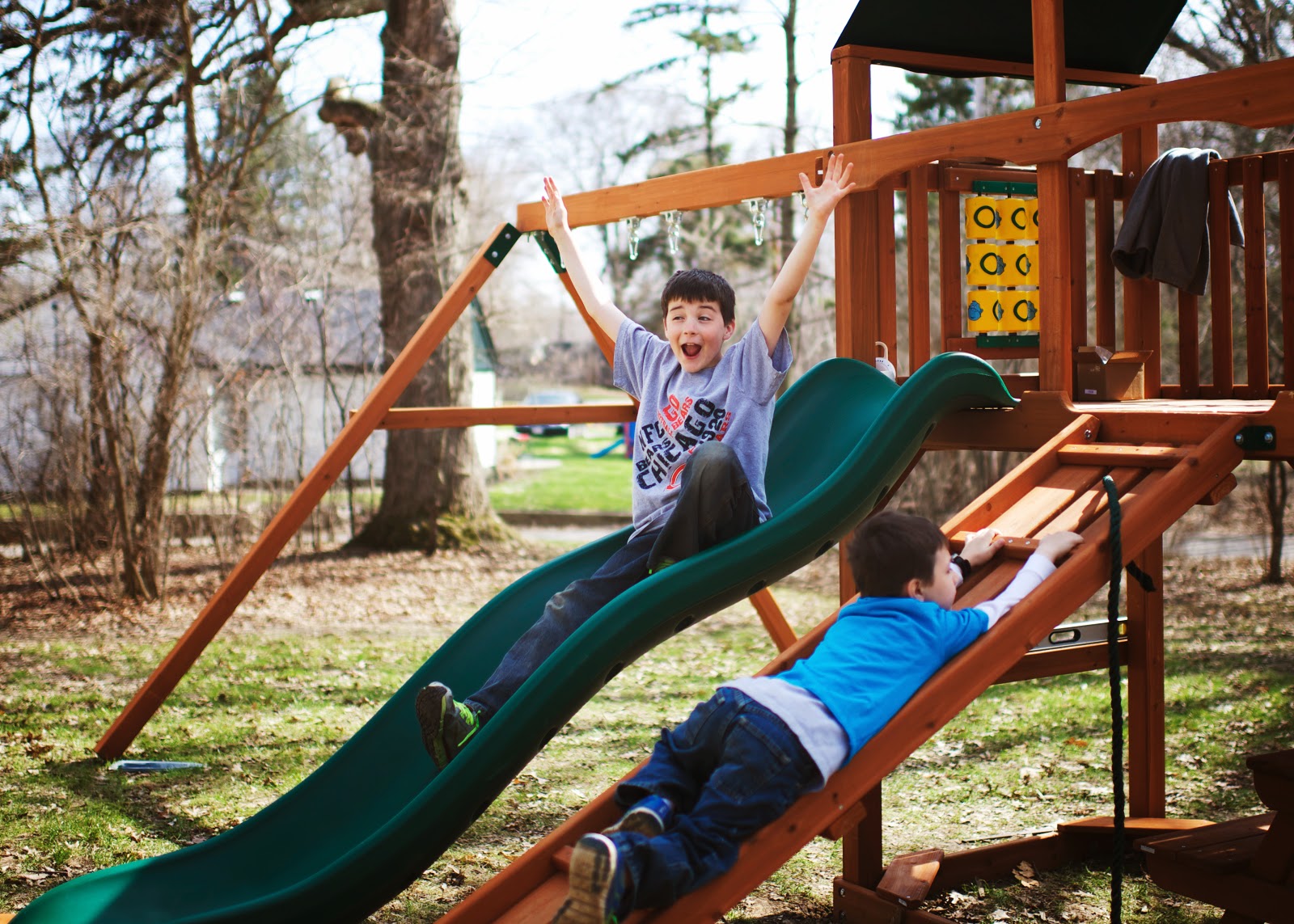 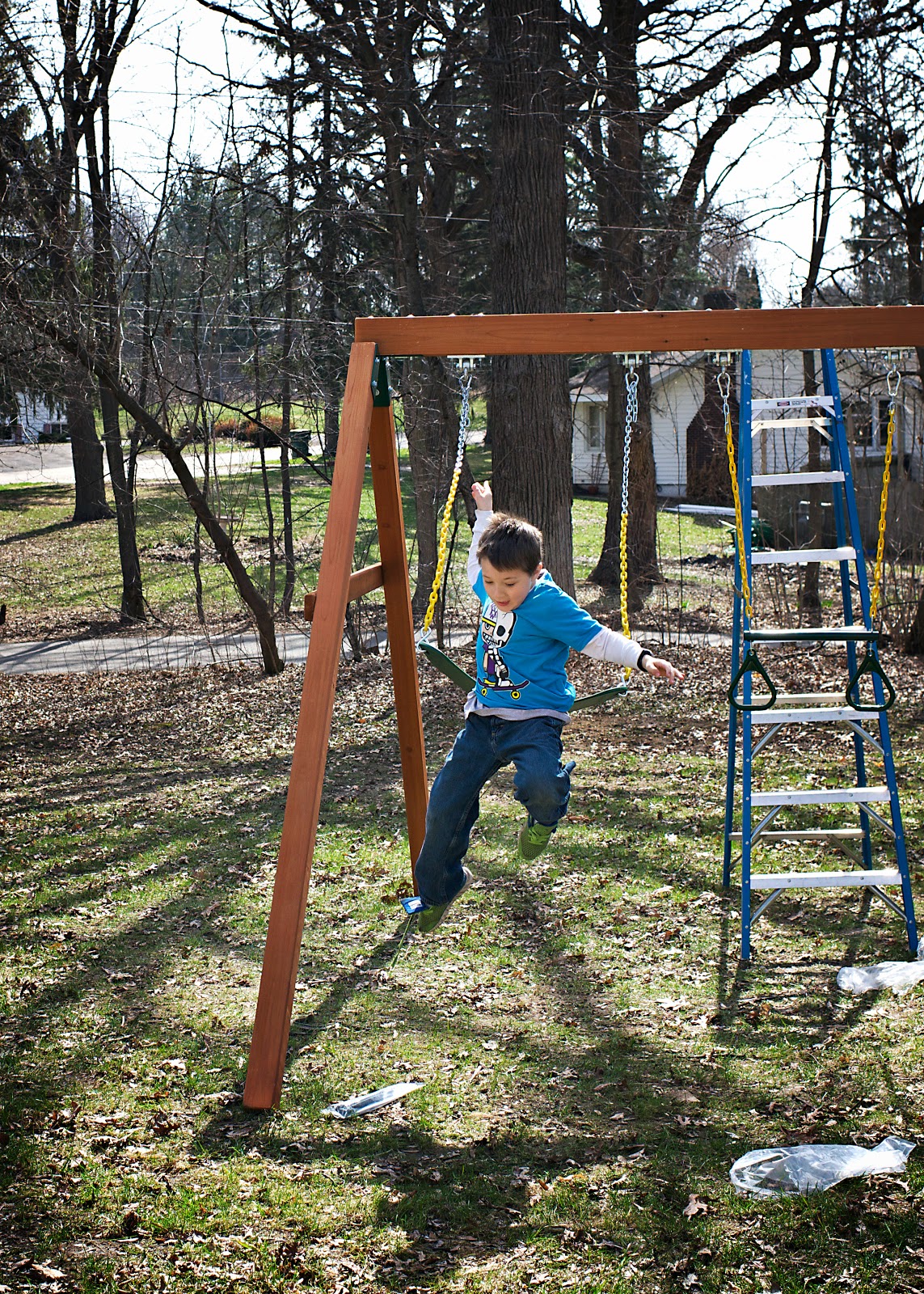 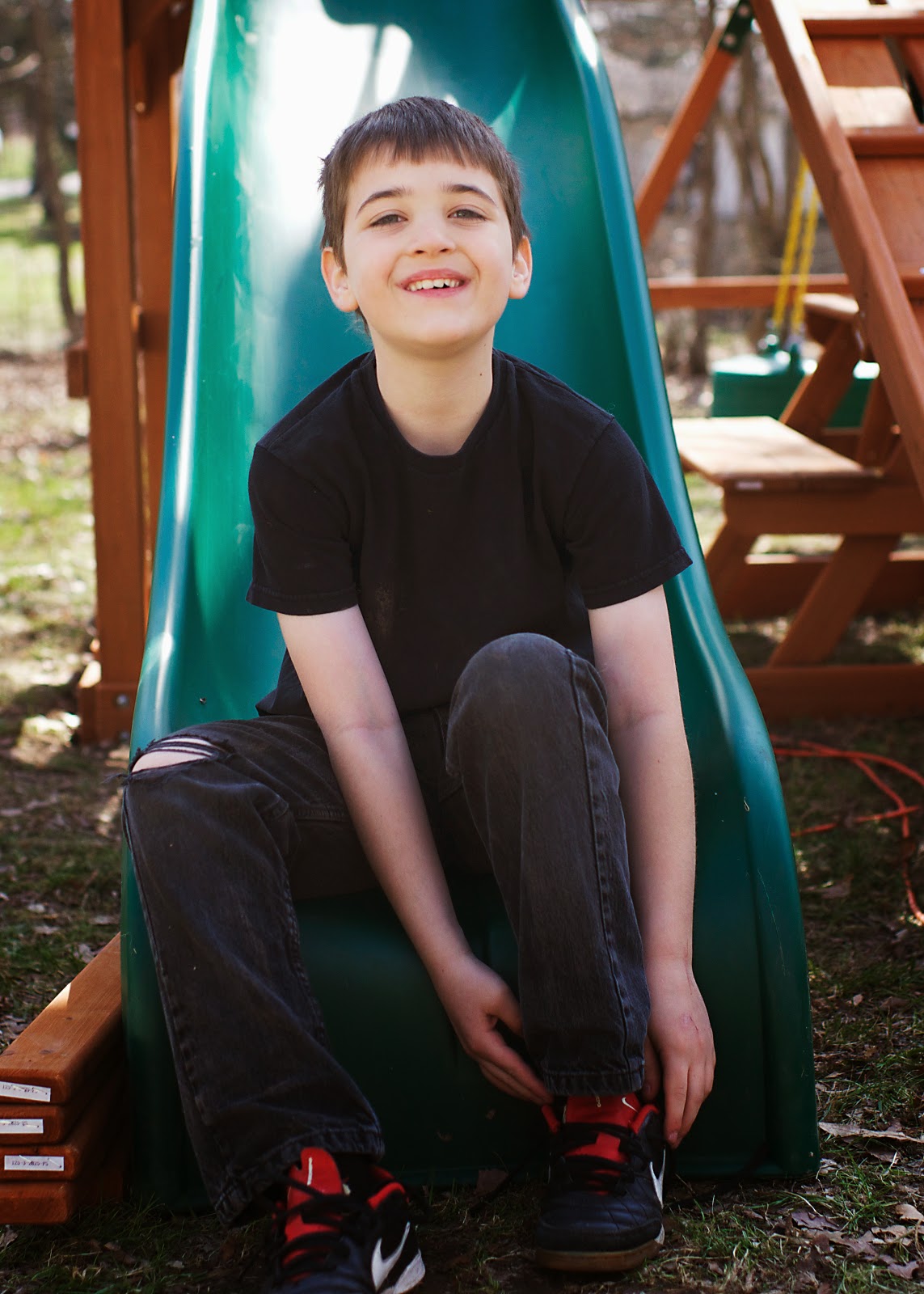 Then the time came.  The play set was totally finished.  Quentin was just waking up from his nap.  I don't know why, but it was like we needed his approval.  I don't know when this kid became the one to rule the roost, but we wanted to make sure he liked it.  We led him outside.  He ran right over to it.  He climbed up the ramp.  Then... he did it... he went down... the SLIDE!!!! 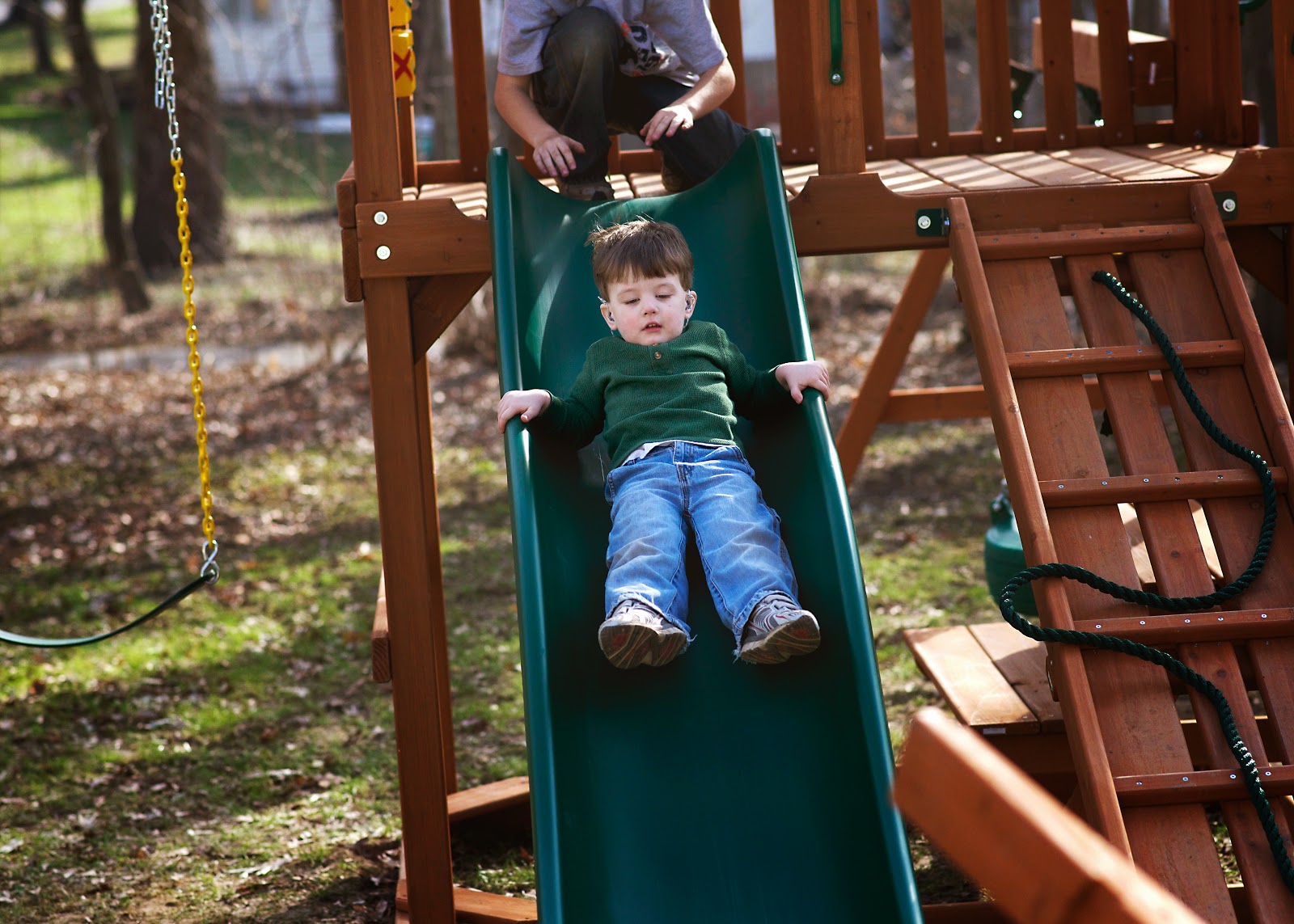 Yea, I had hoped he didn't look so terrified.  But he was definitely unsure.  It took a little time and a little bit of watching his brothers play and he finally felt more comfortable.  We even got a smile... and then, after all of that, Jeremiah needed to meditate.. obviously. 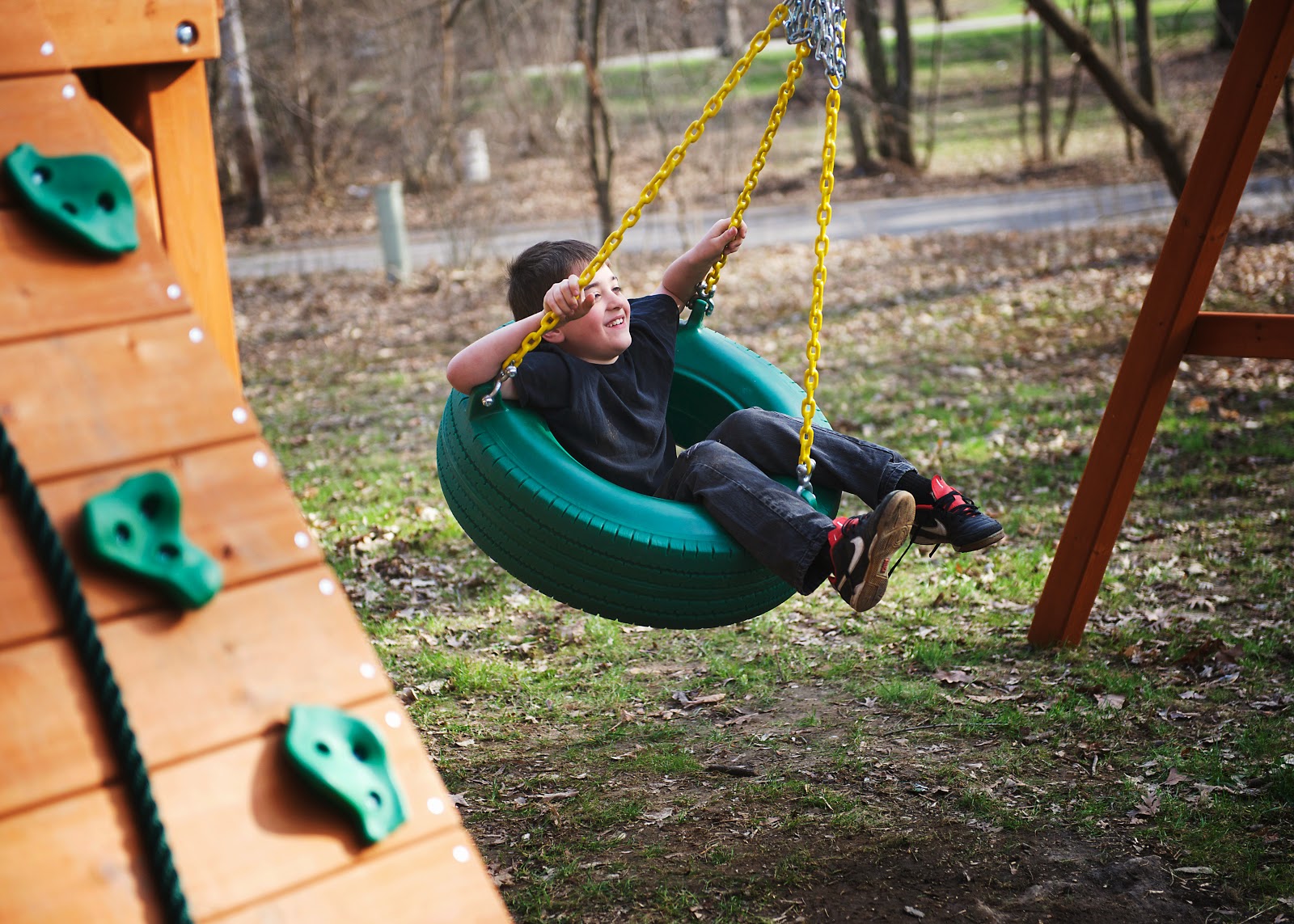 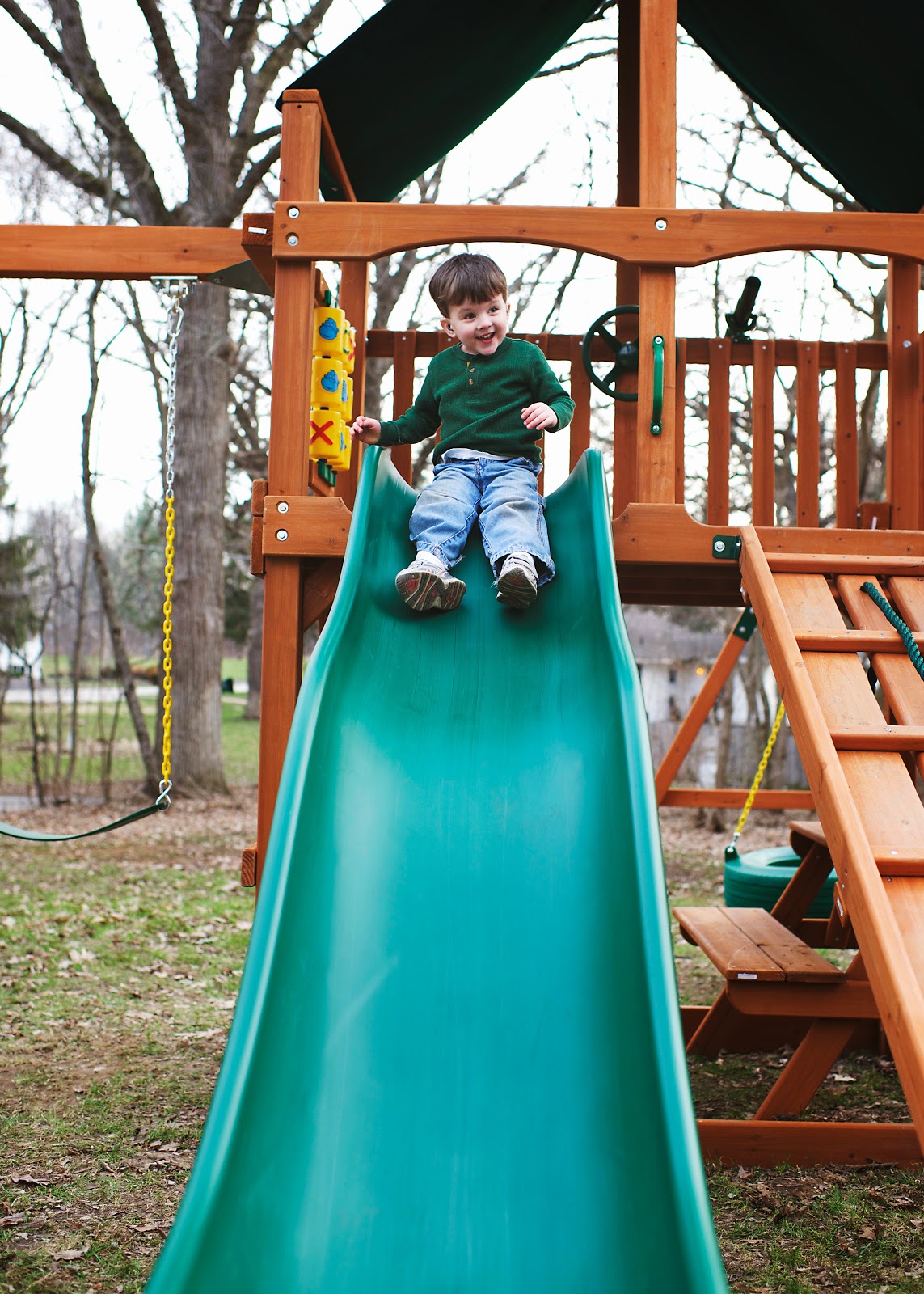 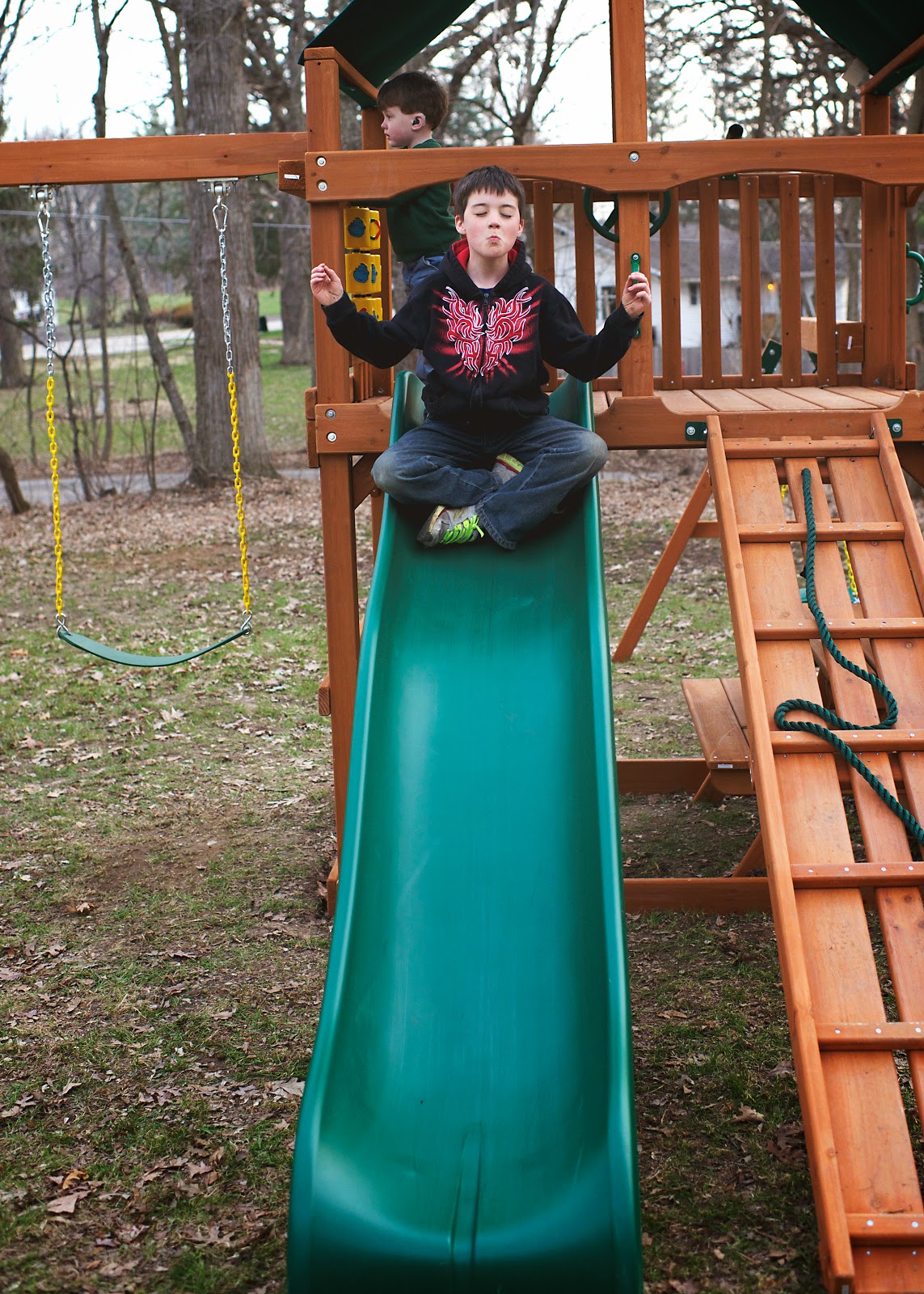 Now that this was out of the way, it was time for our next bit of fun.  Easter eggs!  The kids were a bit tired out from playing outside so it was more low key this year, but we got them done. 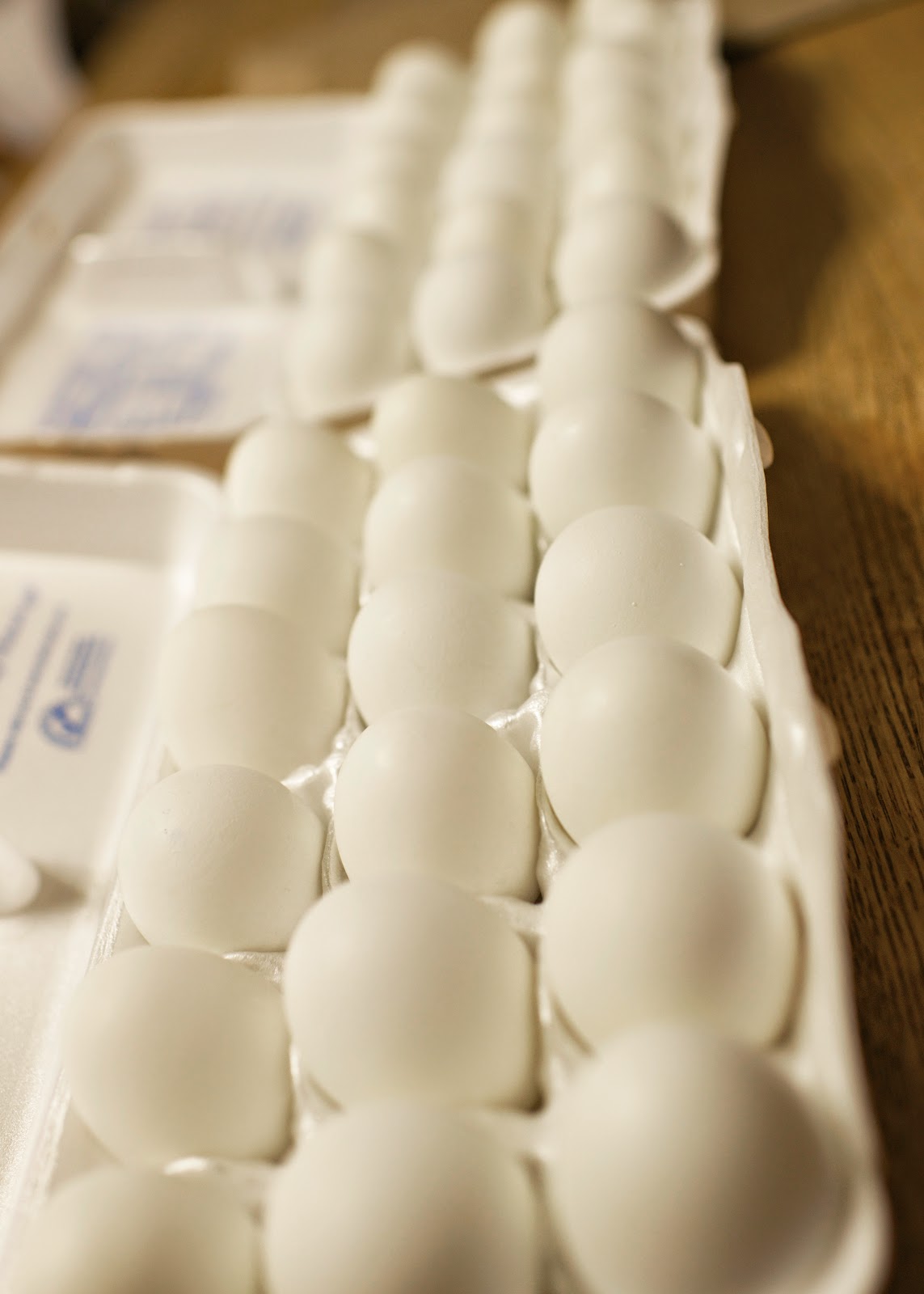 The "after shot"!  And some in betweenies, including one of Mallory with her first Easter egg!  And of course the 'Mom Rocks' egg is totally the best! 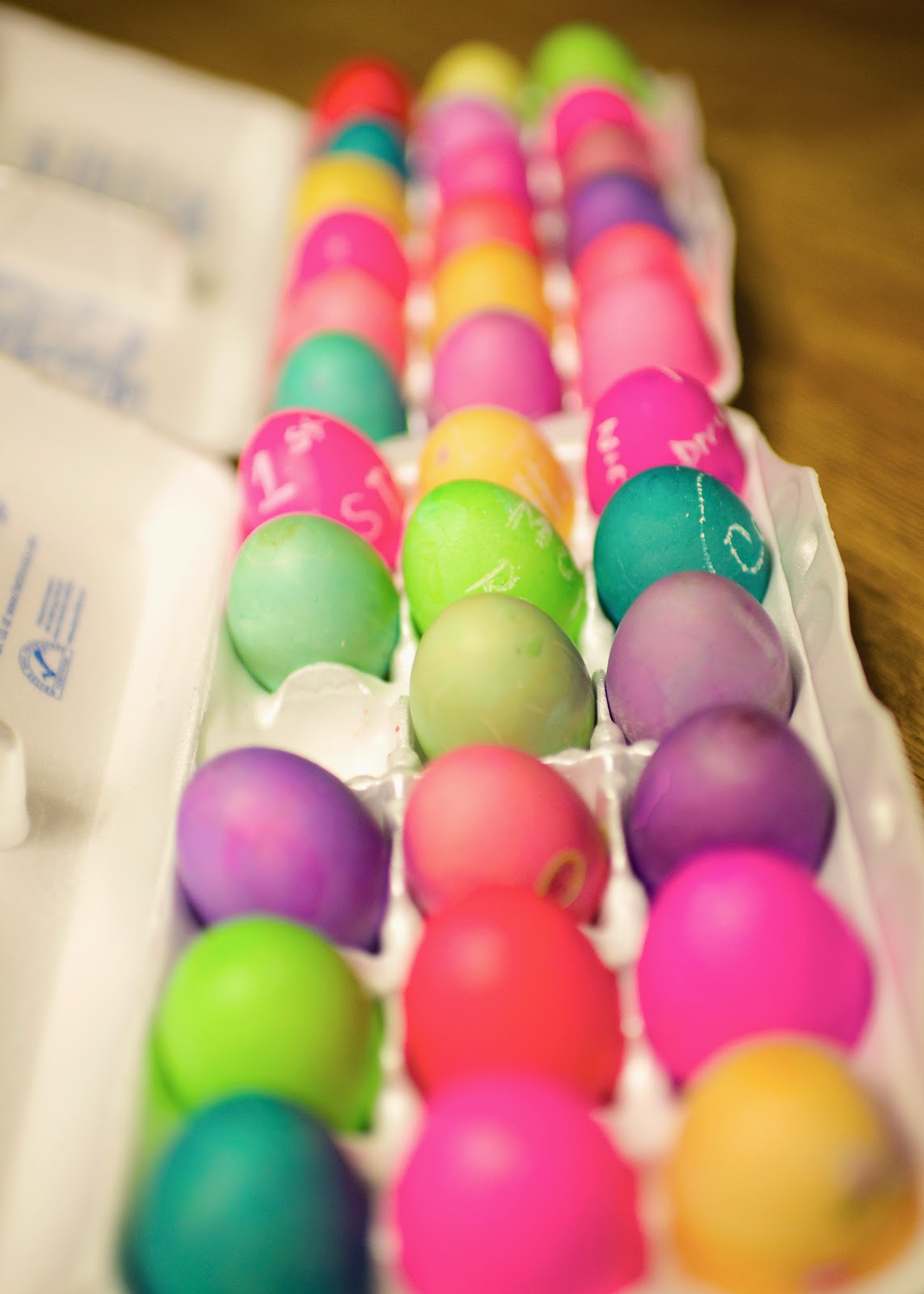 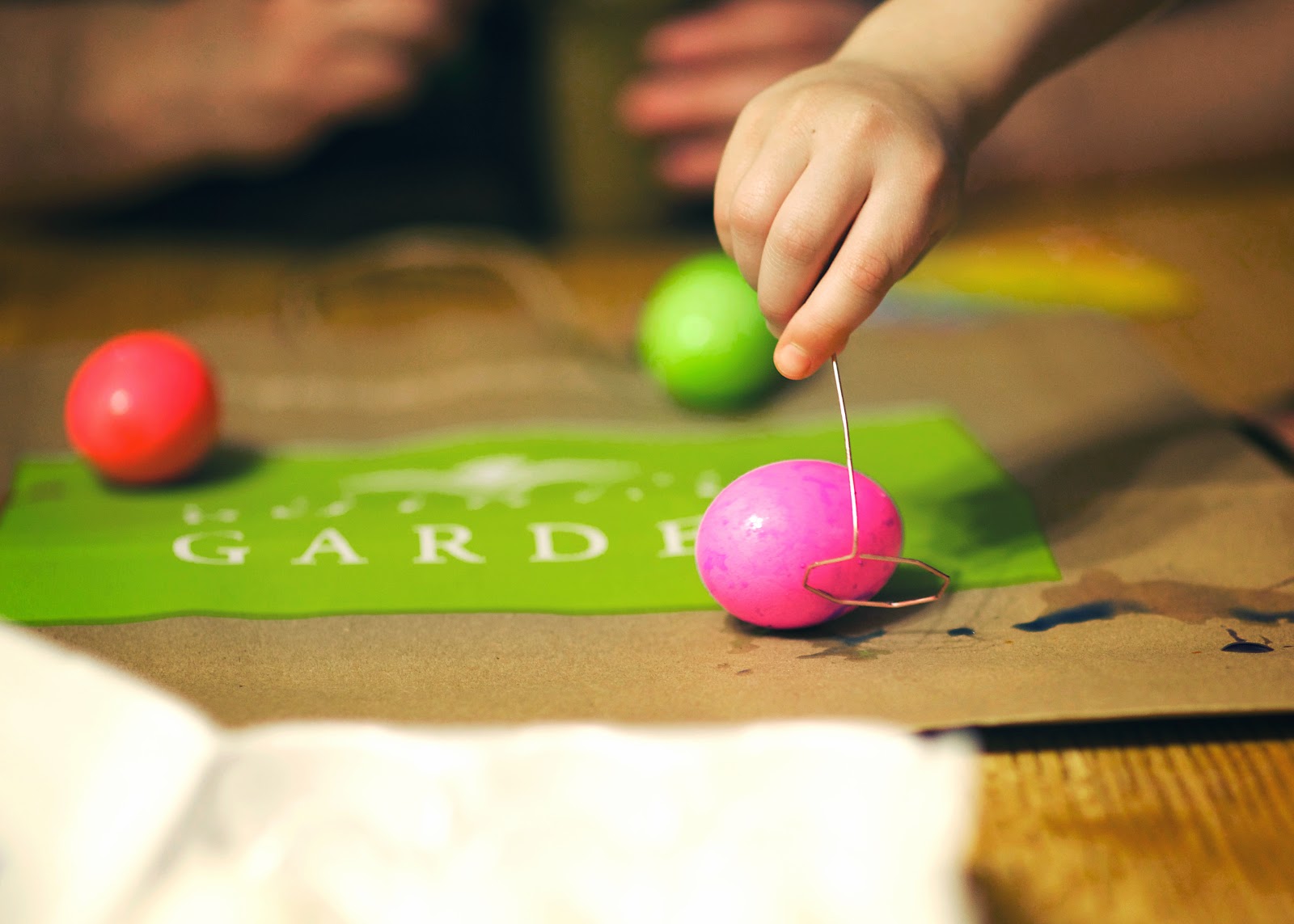 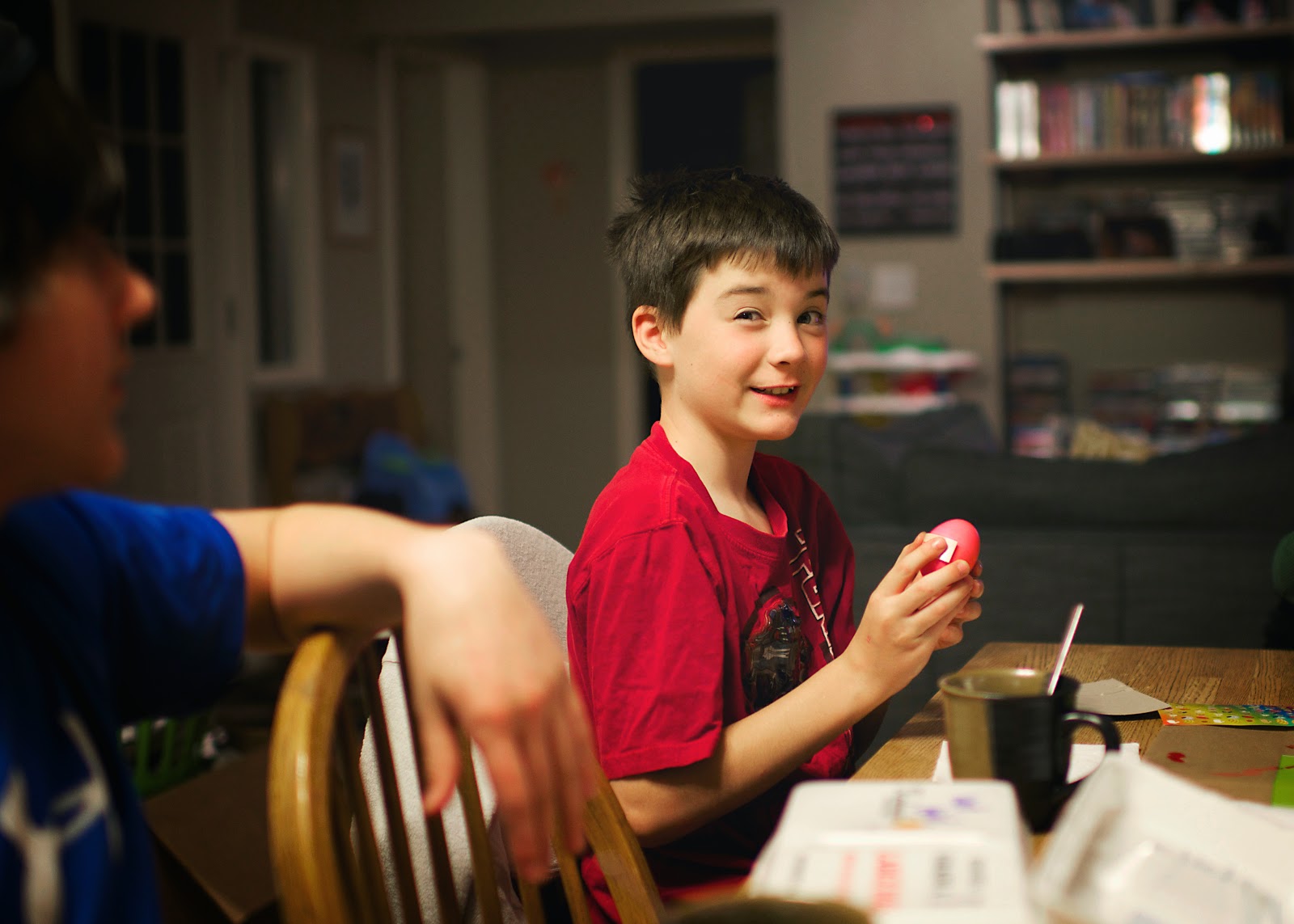 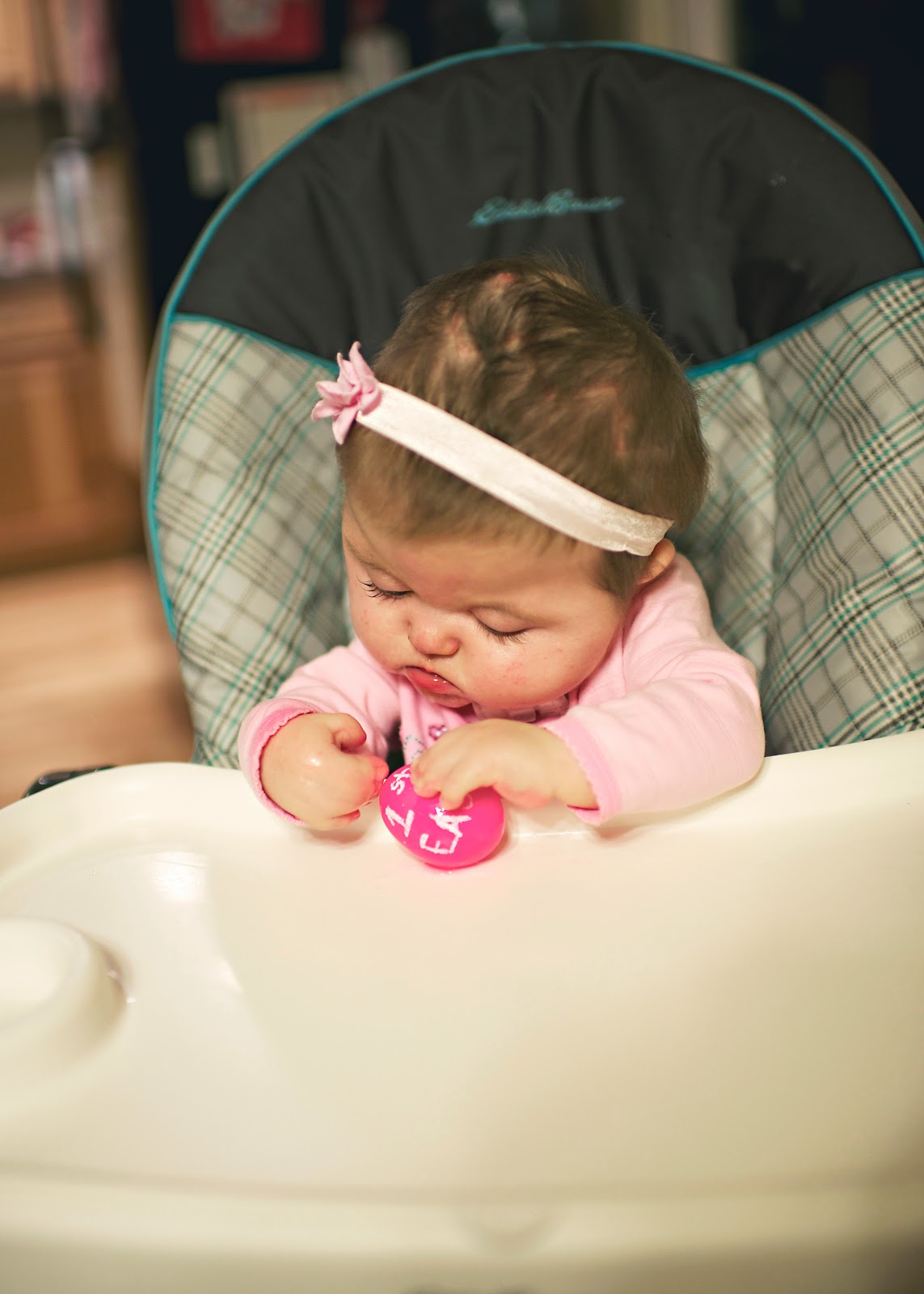 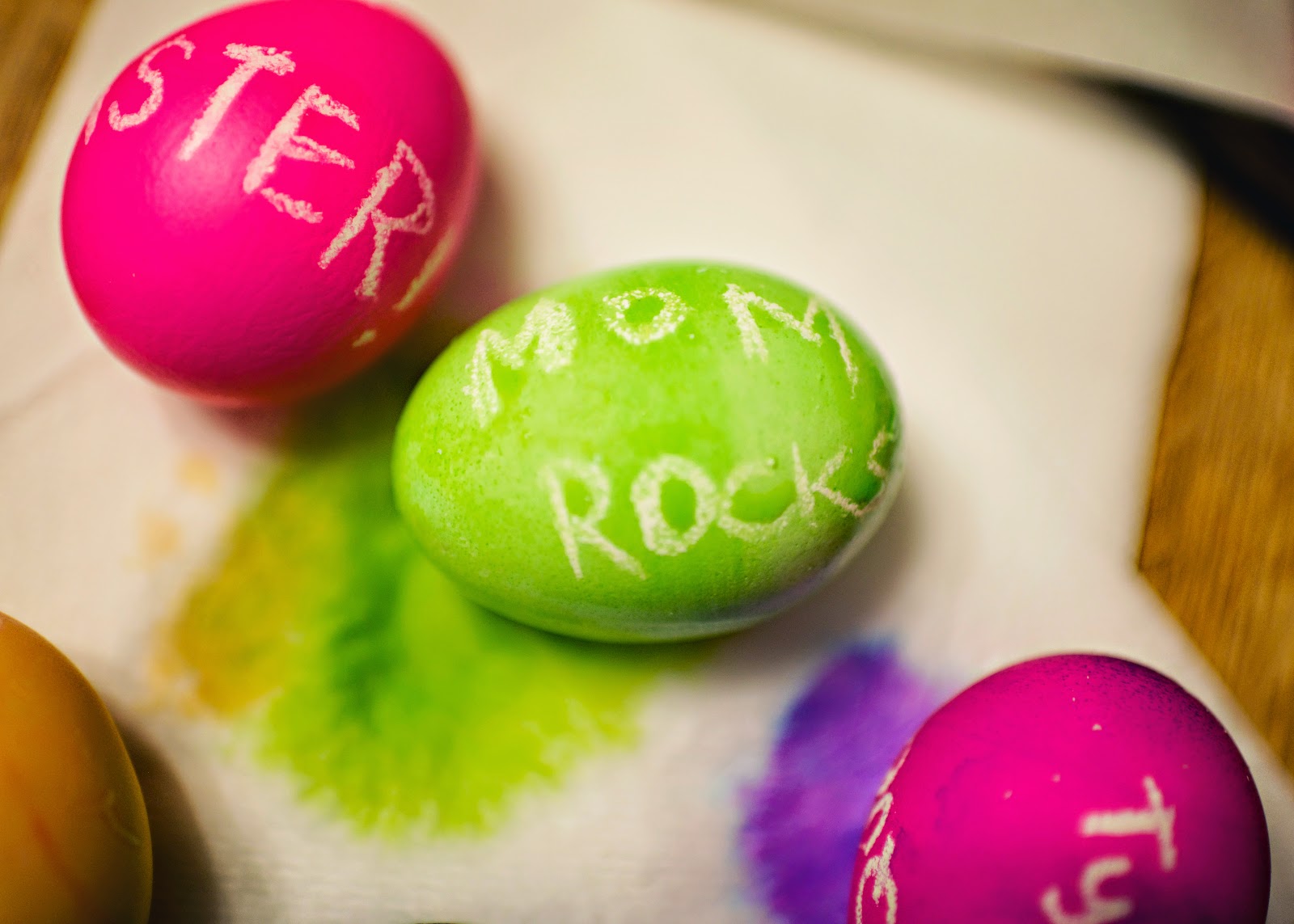 Today, my mommy, my twin sister and nephew came by to hang out and celebrate Easter.  It was such a fun day!  We played basketball, spent plenty of time on the new play set and ate yummy food!

My nephew, Anthony, clearly instructed me that he wanted a picture taken with his Mommy.  He said "cheese!" and walked over to my sister and sat in her lap.  He knows what's important!!  But he provided us with plenty of ADORABLE pics today! 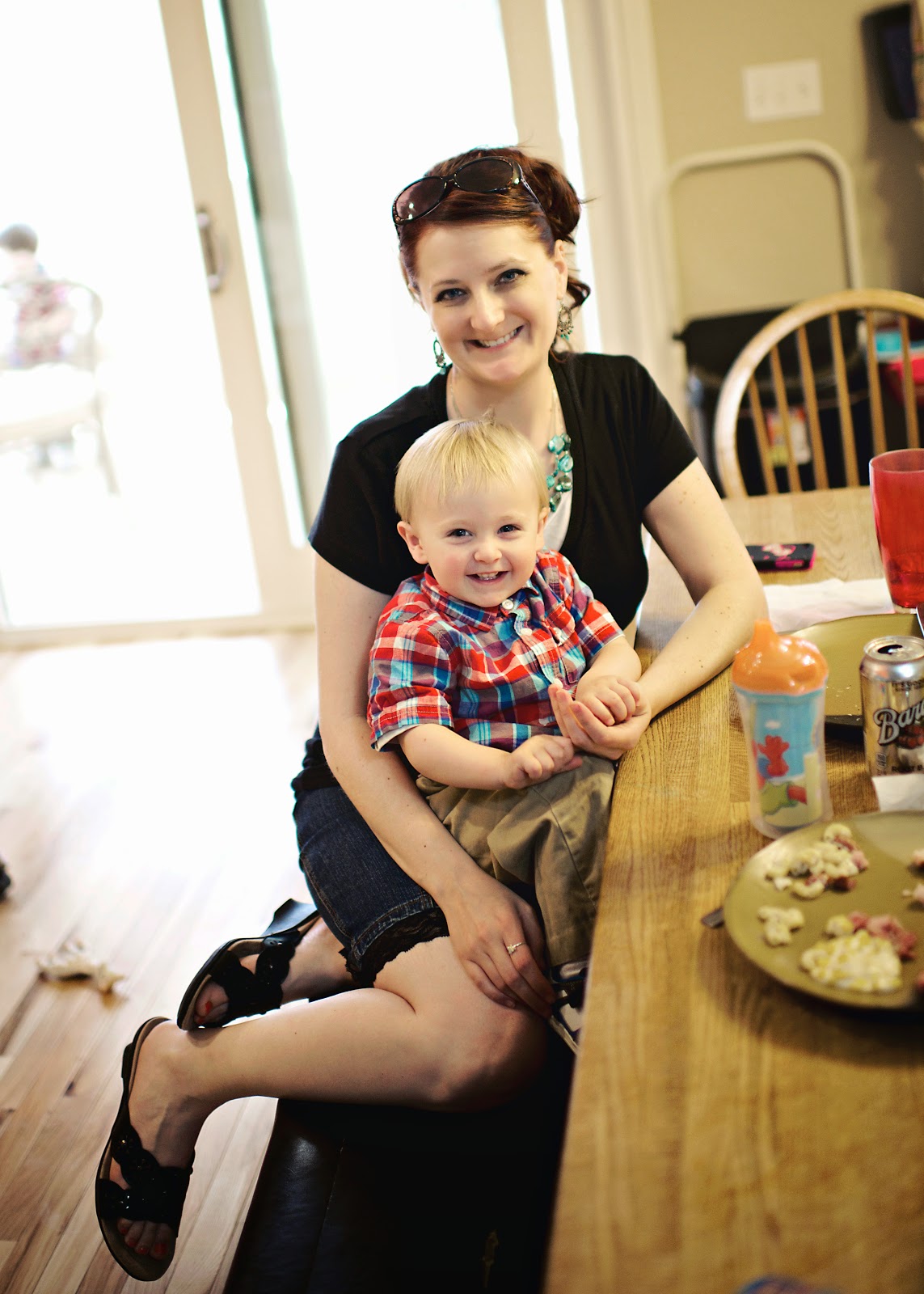 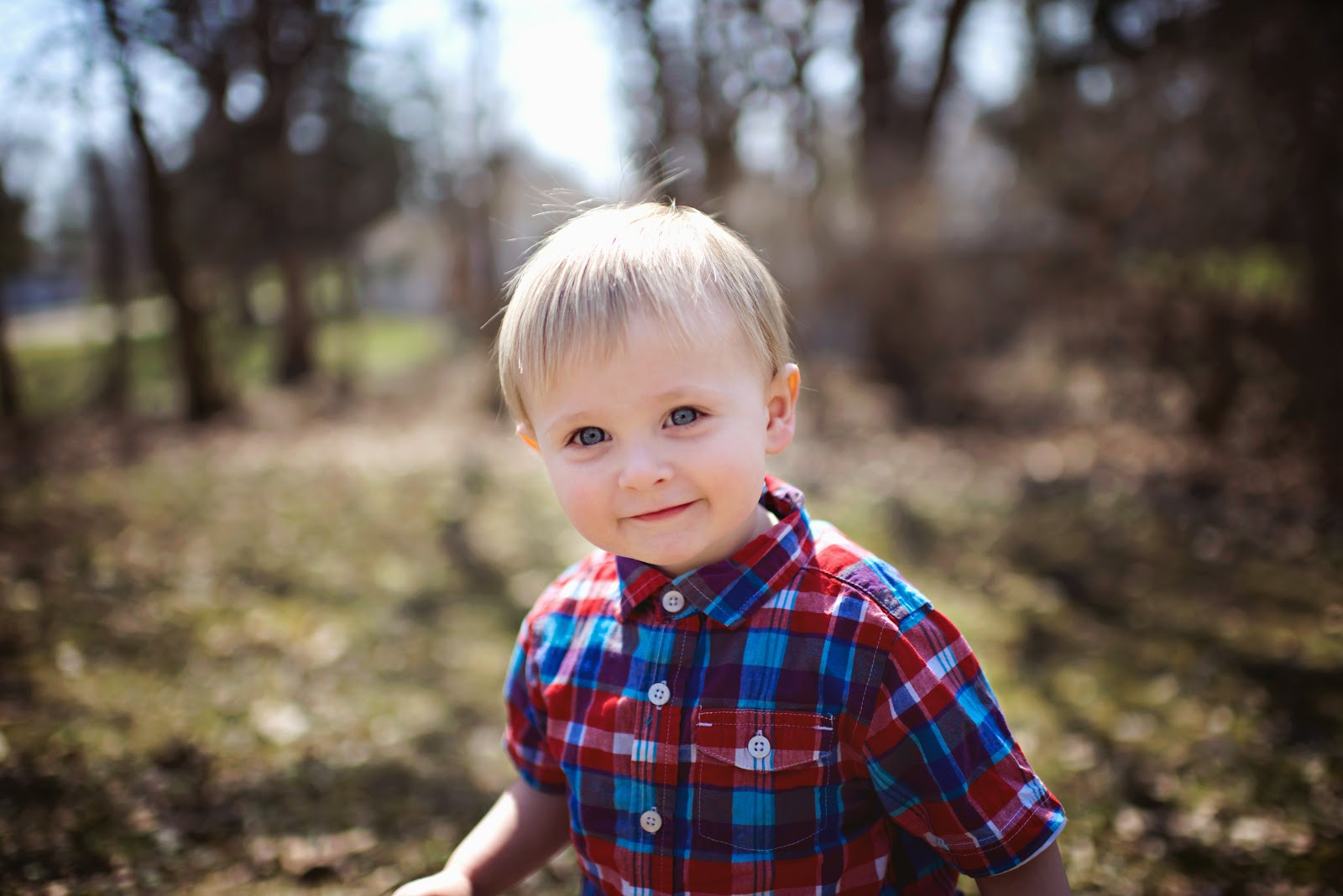 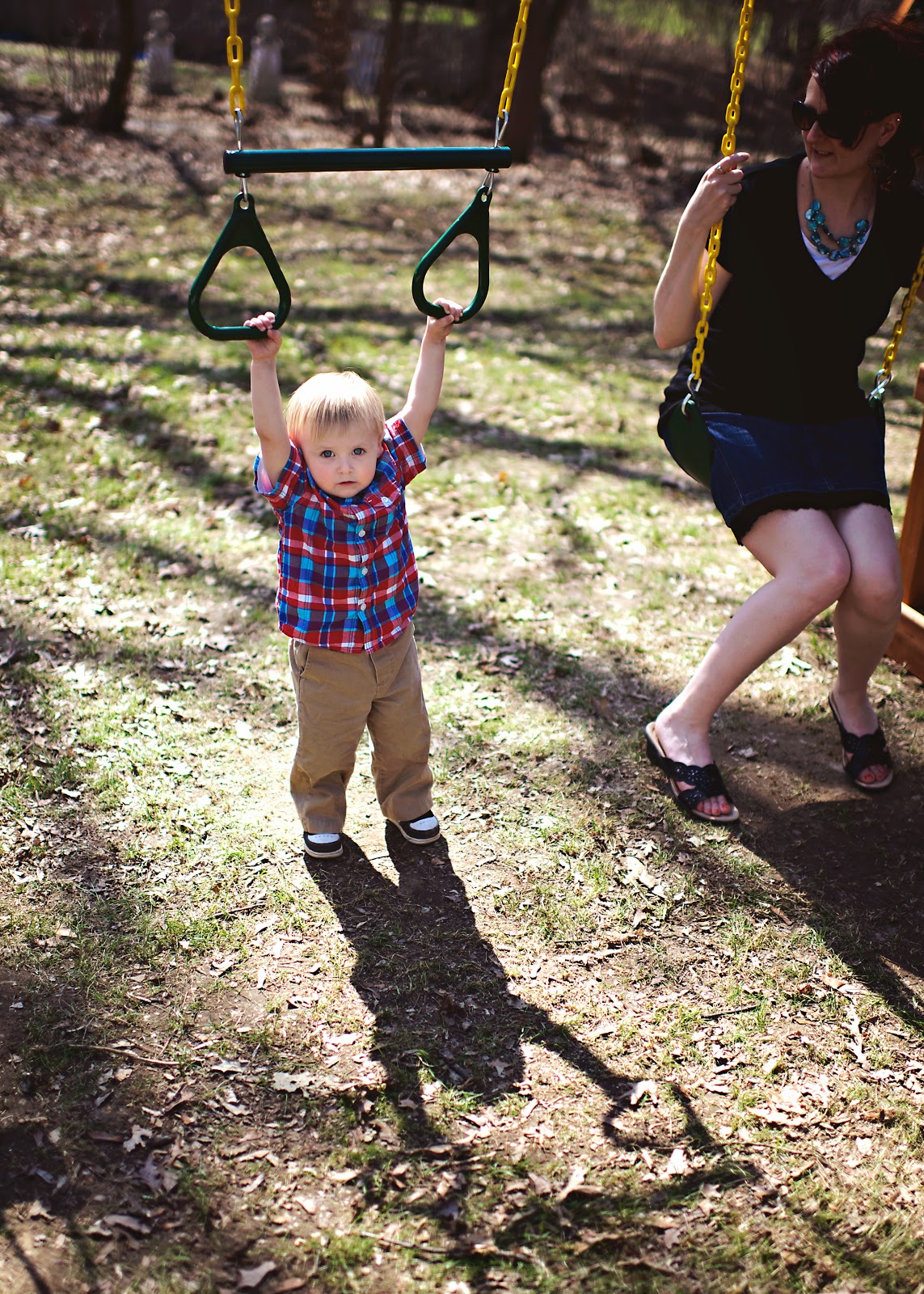 We had some awesome tire swing fun... because if you don't like tire swings you are LAME!! 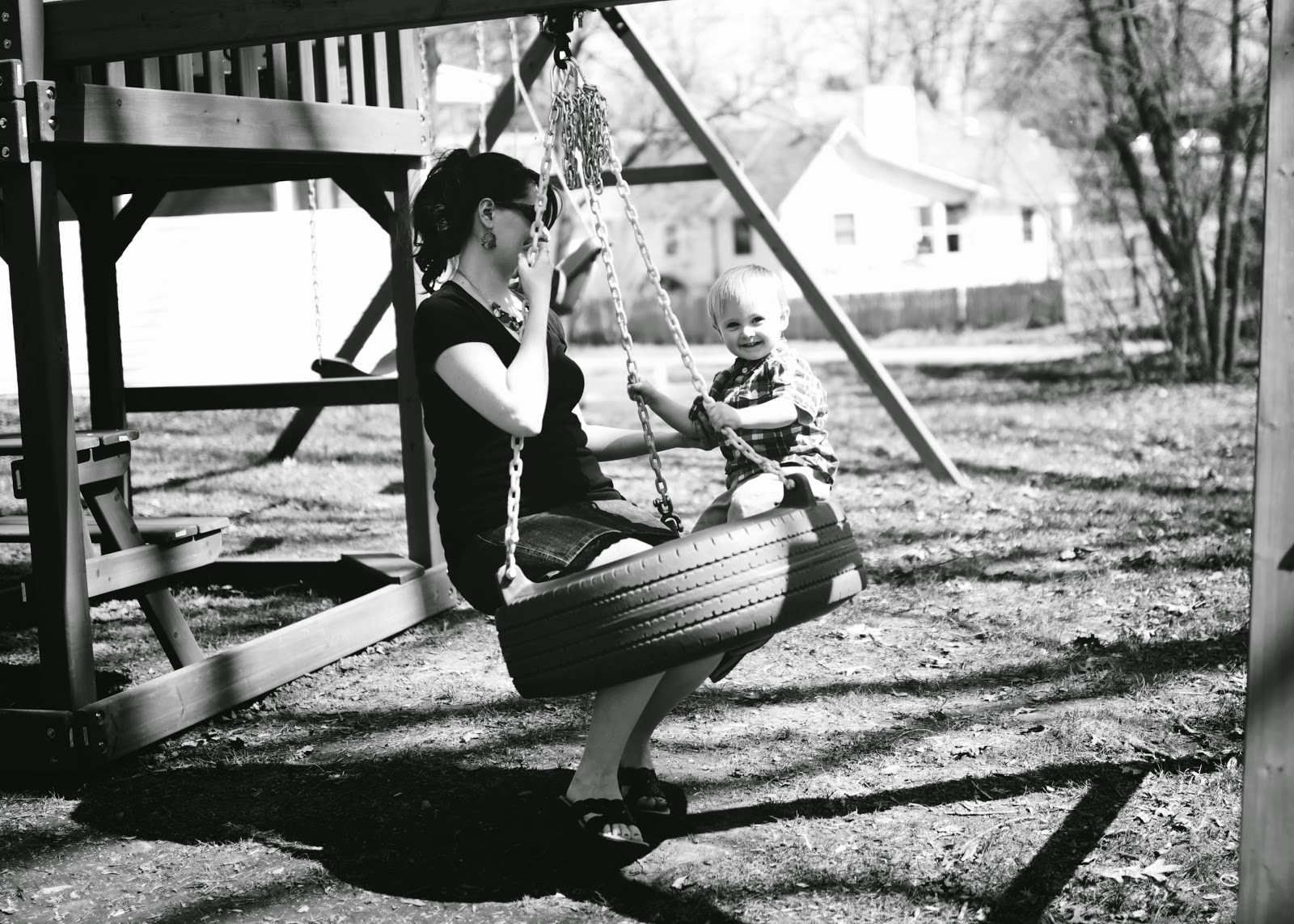 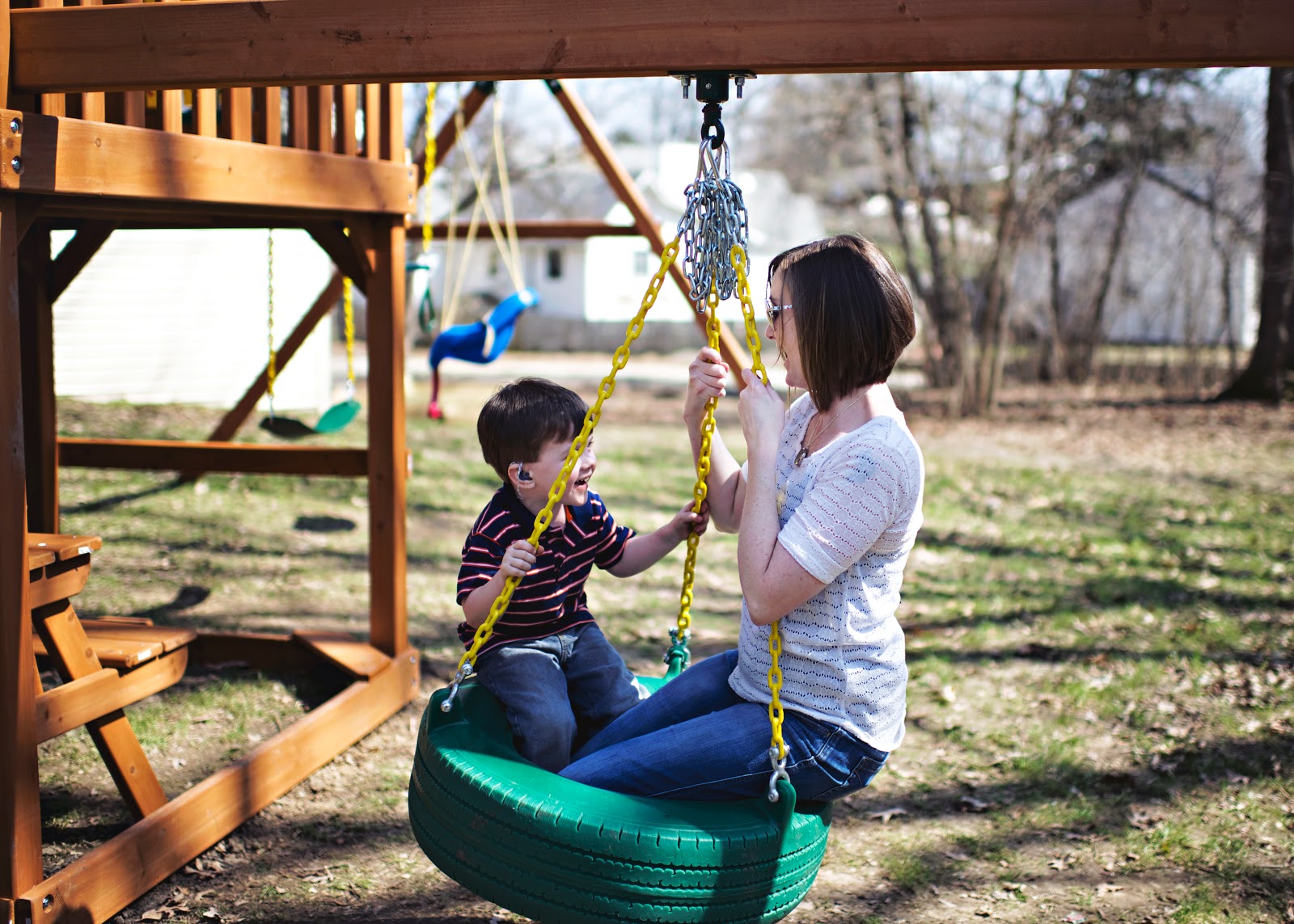 And Mallory went on her first swing!! She loved it!! 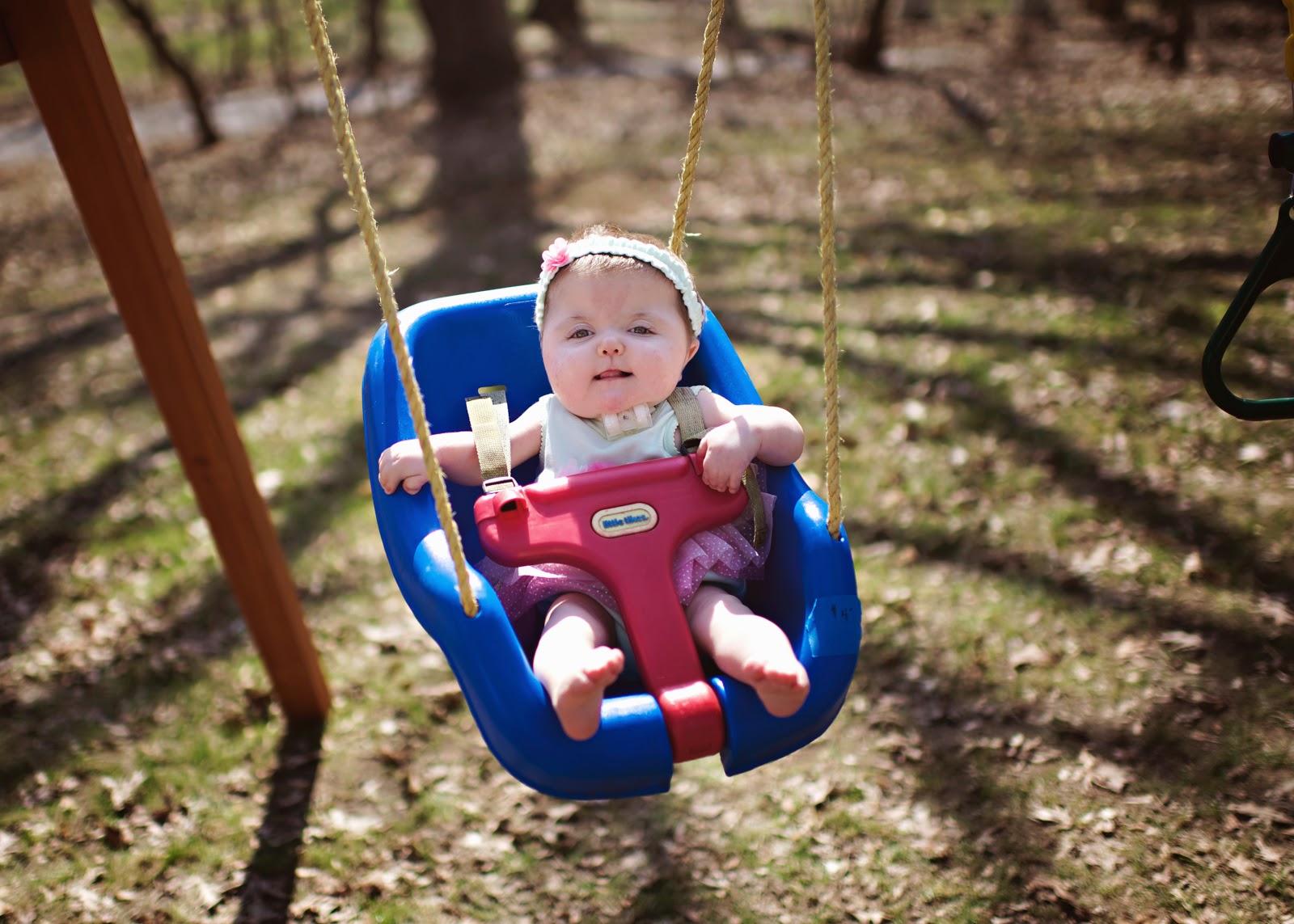 This was her first Easter.  I needed some reminding of that, which my 16 year old rubbed in my face!  We made her an Easter egg last year but she didn't come along until June!  She looked so adorable today too!!  She was happy and excited to be outside... it couldn't have gone any better! 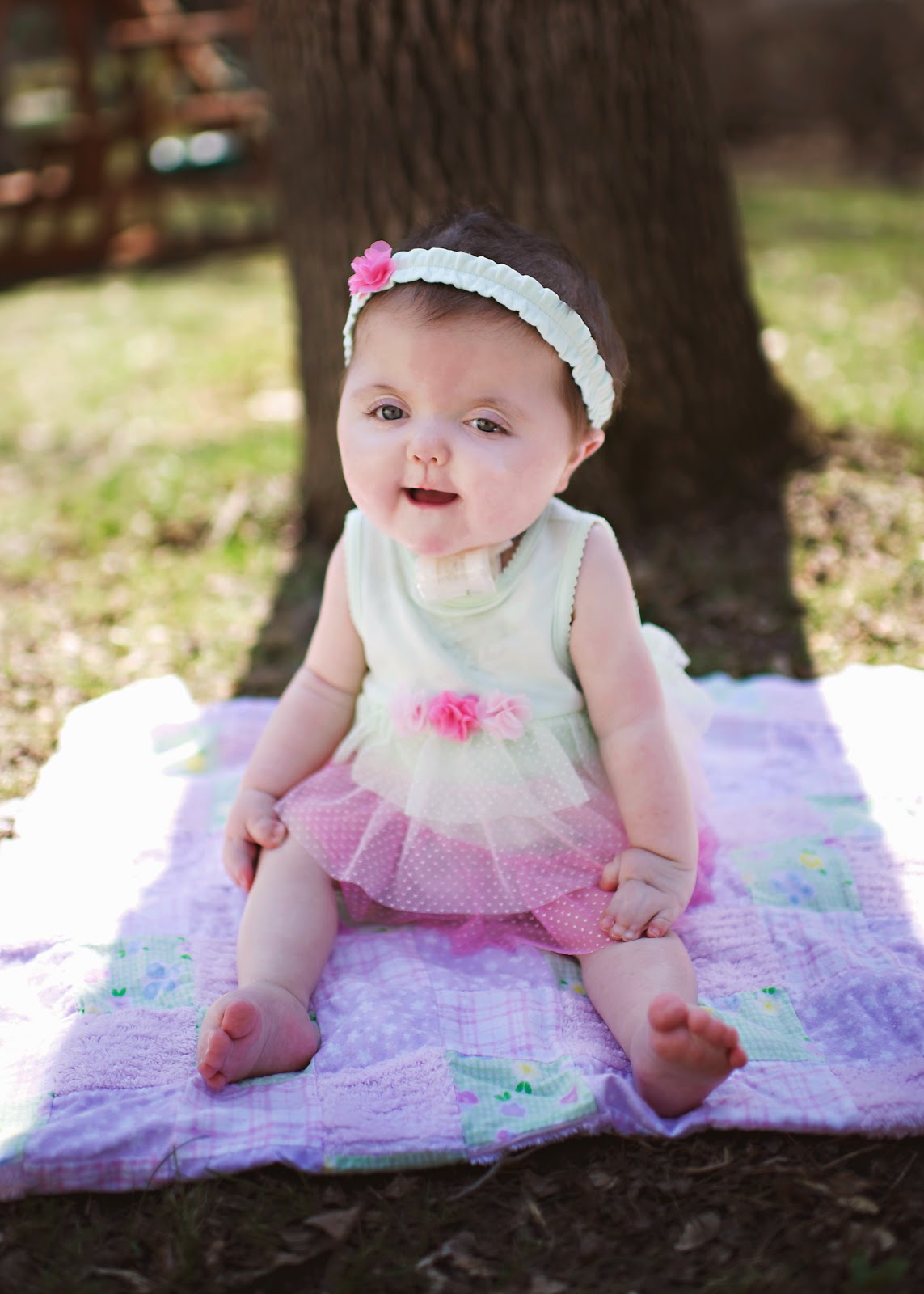 Then we (my sister, mommy, husband, myself and all of the kids) challenged ourselves with trying to get a group photo of all the kids.  This is never an easy task.  It took a few takes.  It took some watery sun tears to be wiped away.  It took my sister dancing and making silly noises.  But we got one! 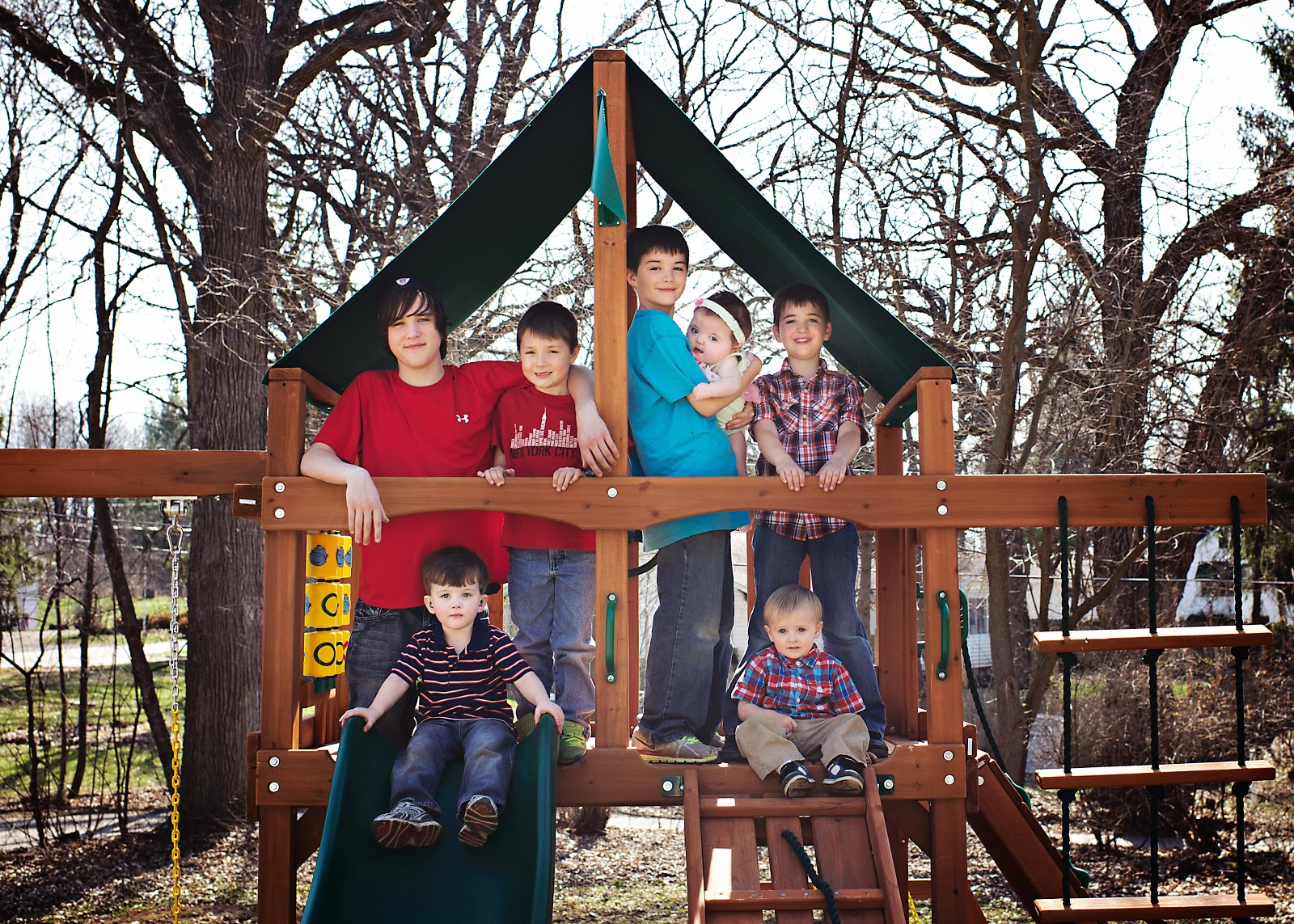 This was such a great day.. and weekend!  We hope everyone had a great Easter as well and have a great week ahead!  Us, well, Frank is traveling this week and I get to put my three year old on a bus for the first time tomorrow morning, but I think it's going to be a good week!