My World, My Mommy's Day

I try to never get too excited about Mother's Day.  In the commercials you see Moms getting breakfast in bed.  That never happens here.  My husband offers to make me something but I'm kinda okay with my kids not doing it.  I'm scared to think of what they'd come up with.  Just... scared.  I mean, Quentin dips goldfish crackers in chocolate milk.  So, I appreciate my kids not making me breakfast.

Then there's the potential coupon book.  "I'll do what Mom says for an entire day."  What?  I want them to always do what I say.  Not just for a day.  And certainly not just for Mother's Day.  "I'll leave you alone for a whole day."  WHAT?  Please don't.  If they are leaving me alone that probably means that they are doing something they shouldn't.  Like eating my hidden candy stash.  Or using my tampons for a science project (yes that has happened).  "I'll clean the whole house for you."  Pssshhh.  Please.  Cleaning the whole house for me means they'll push all of the dirt into a corner or a closet hoping I don't notice.  But then I do notice.  And then I have anxiety because I want to fix it but I don't want to make them feel badly for trying.  Coupon books = not good gifts.

I didn't really know what I wanted to do for Mother's Day.  A few days before though I decided that maybe a zoo trip could be fun.  Mallory is finally feeling better and the weather was supposed to be decent, so why not?  The weather was back and forth though, so we didn't really decide until we all got up this morning that we would go.

As I was getting Mallory's trach cares done and trying to get ready for zoo day, Andrew and Nicholas came in to give me gifts they had made at school.  Quentin had brought a gift home on Friday too.  I have to say, I love the school gifts.  They are always creative and adorable.  It always makes the kids feel good to be able to surprise me with something too.  Aren't these so sweet!? 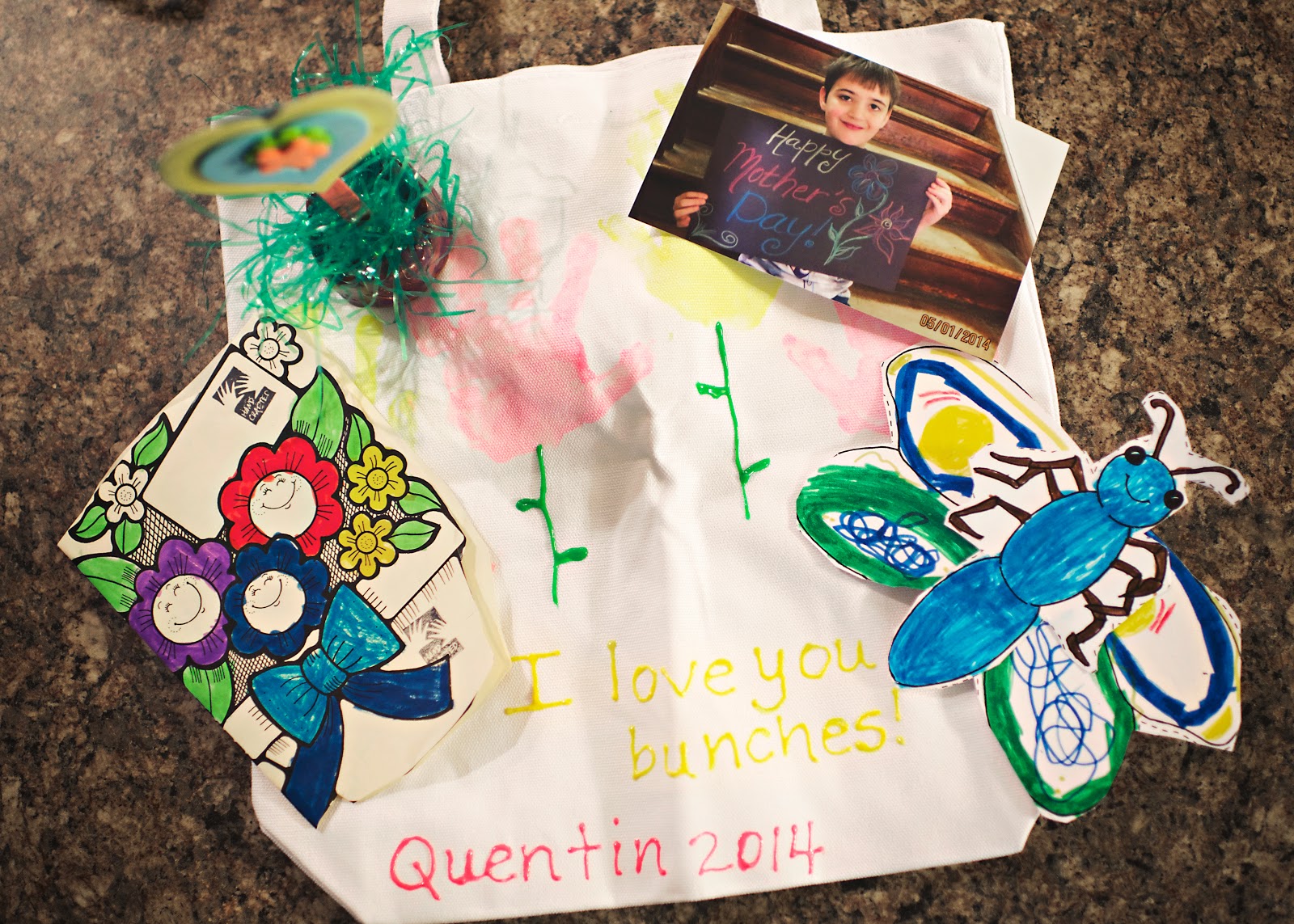 Then, of course, it was out the door!  Wow, was the zoo packed today.  I think everyone had the same idea.  It took so long to get into the parking lot! I'm so glad that a house right off the expressway had put some garbage on the curb.  It gave us something to talk about while lounging in traffic.  The volley ball net they were discarding, the baby swing, the dresser.  Thank you, random person.  P.S.  Maybe next time you should have a garage sale instead.  Might make a few bucks.  You have an optimal location!

Once we finally got to the zoo and realized it was like a zillion degrees hotter than the weather pages said it'd be, I stopped at the gift shop.  Mallory was dressed in a long sleeved, black shirt and long pants.  She was already sweating from just being in the car seat.  The boys at least had t-shirts under their sweatshirts.  I found an adorable pink panda shirt, purchased it (along with an adorable purple bear shirt... 2 for $20 dontcha know) and we began our trek around the zoo. 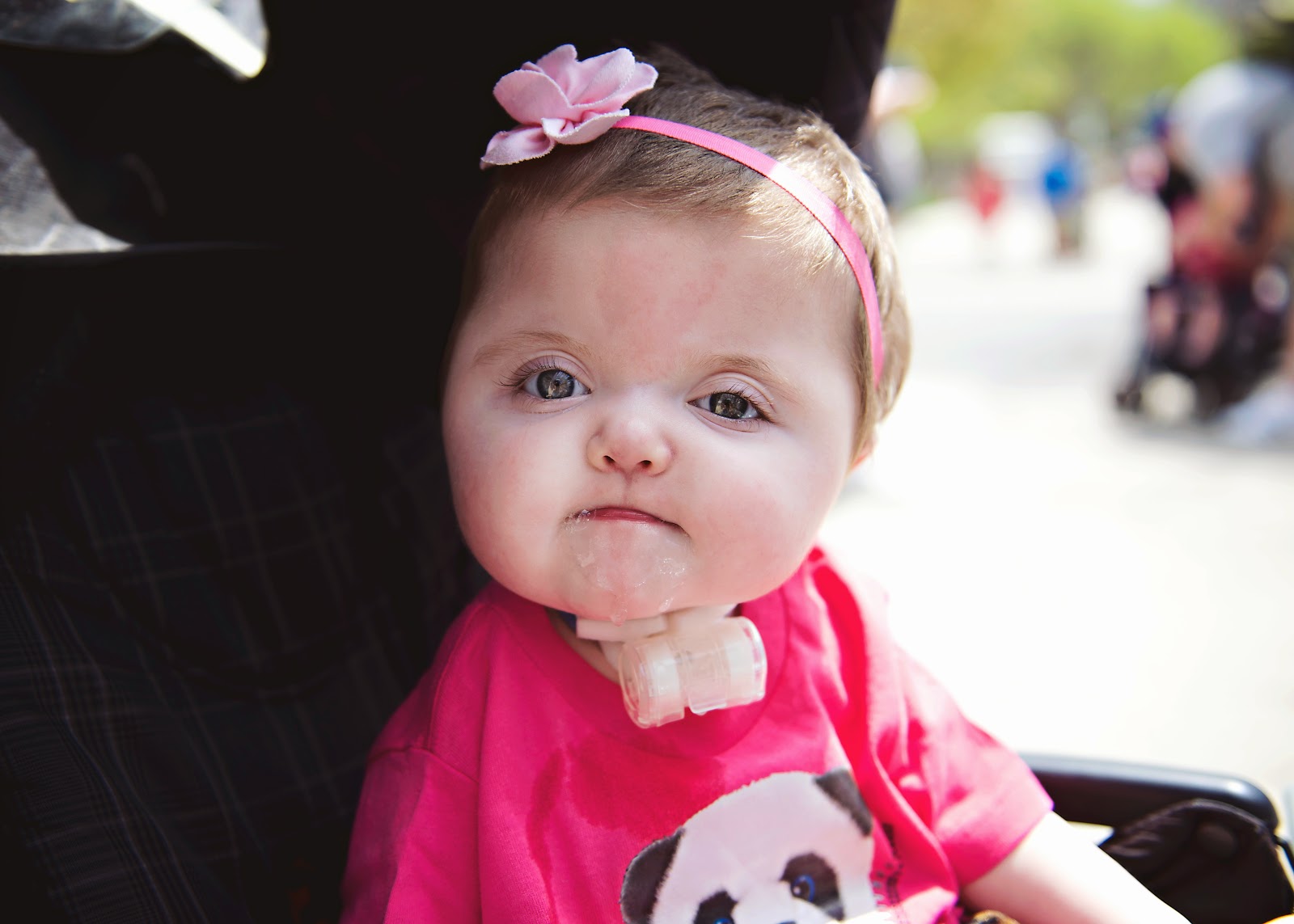 First stop, the hippos.  Or hippo.  And man was he (or she) boring.  The thing would take a couple steps and fall asleep.  Then a couple more and fall asleep again.  Maybe they should test it for narcolepsy?  We waited about ten minutes for it to go into the water and then gave up. 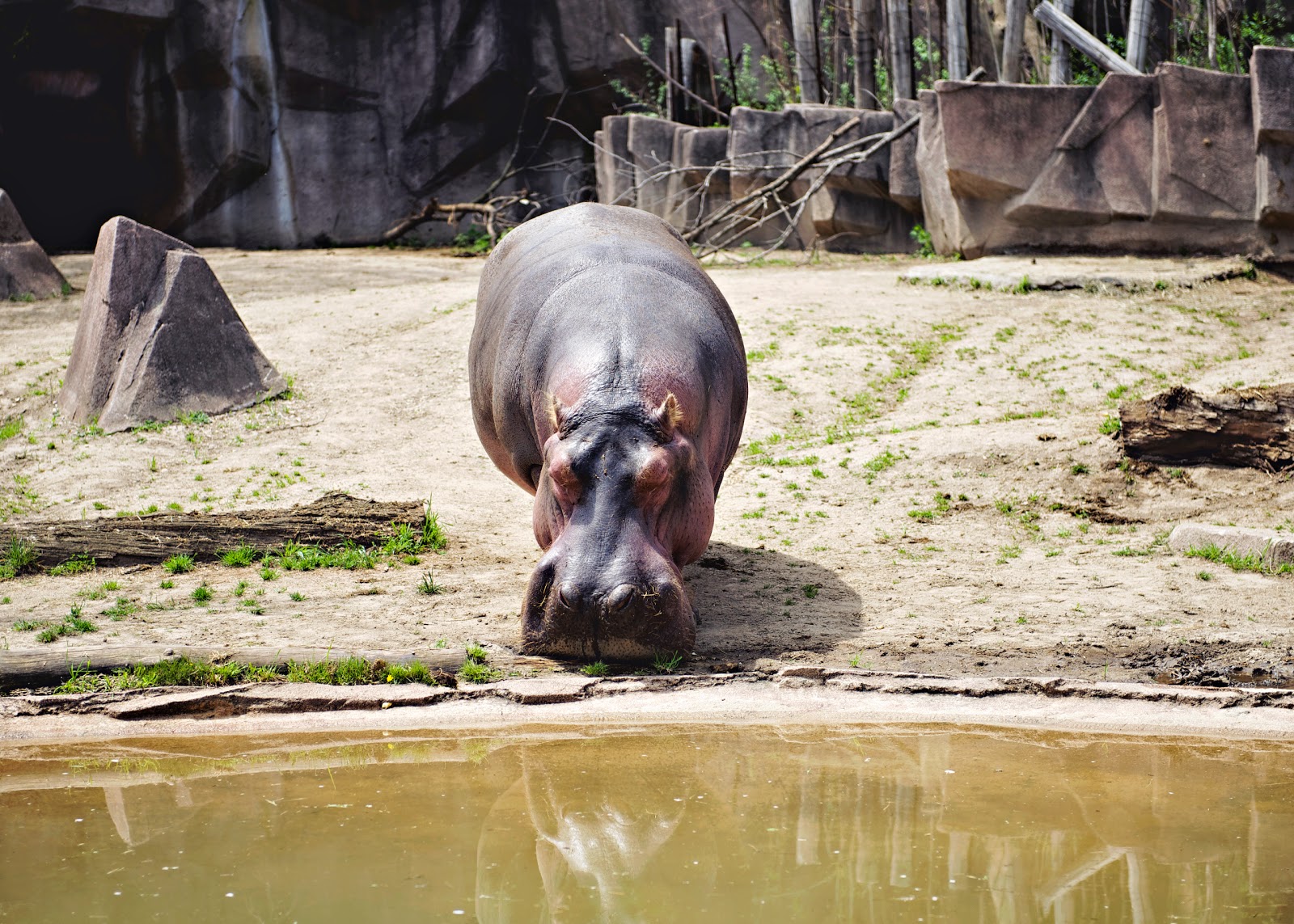 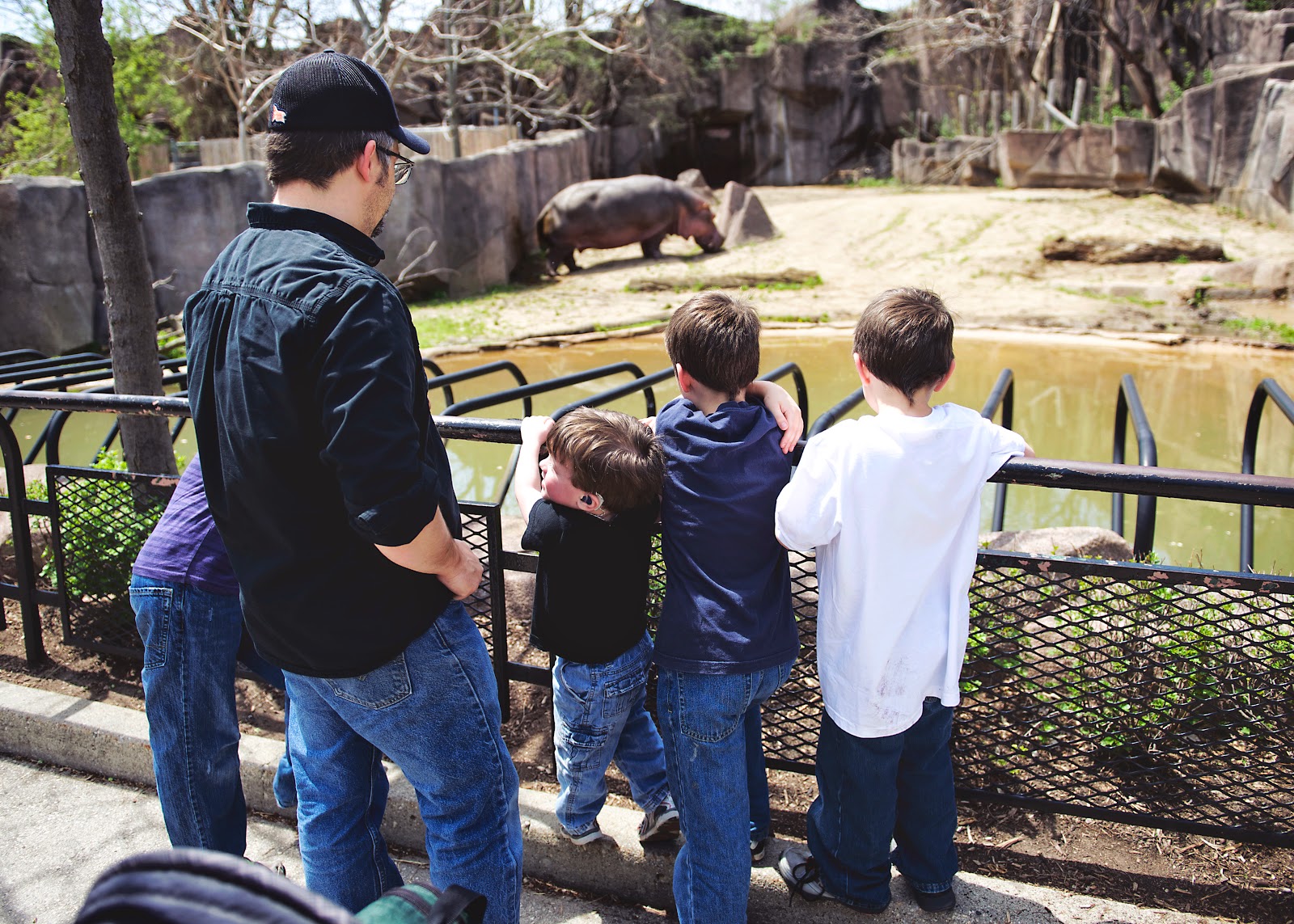 The elephants are always a cool stop.  This one was doing some eating and threatened to spray us with water a couple of times.  I guess he decided not to since it was Mother's Day!  What a lovely message he left for us too! 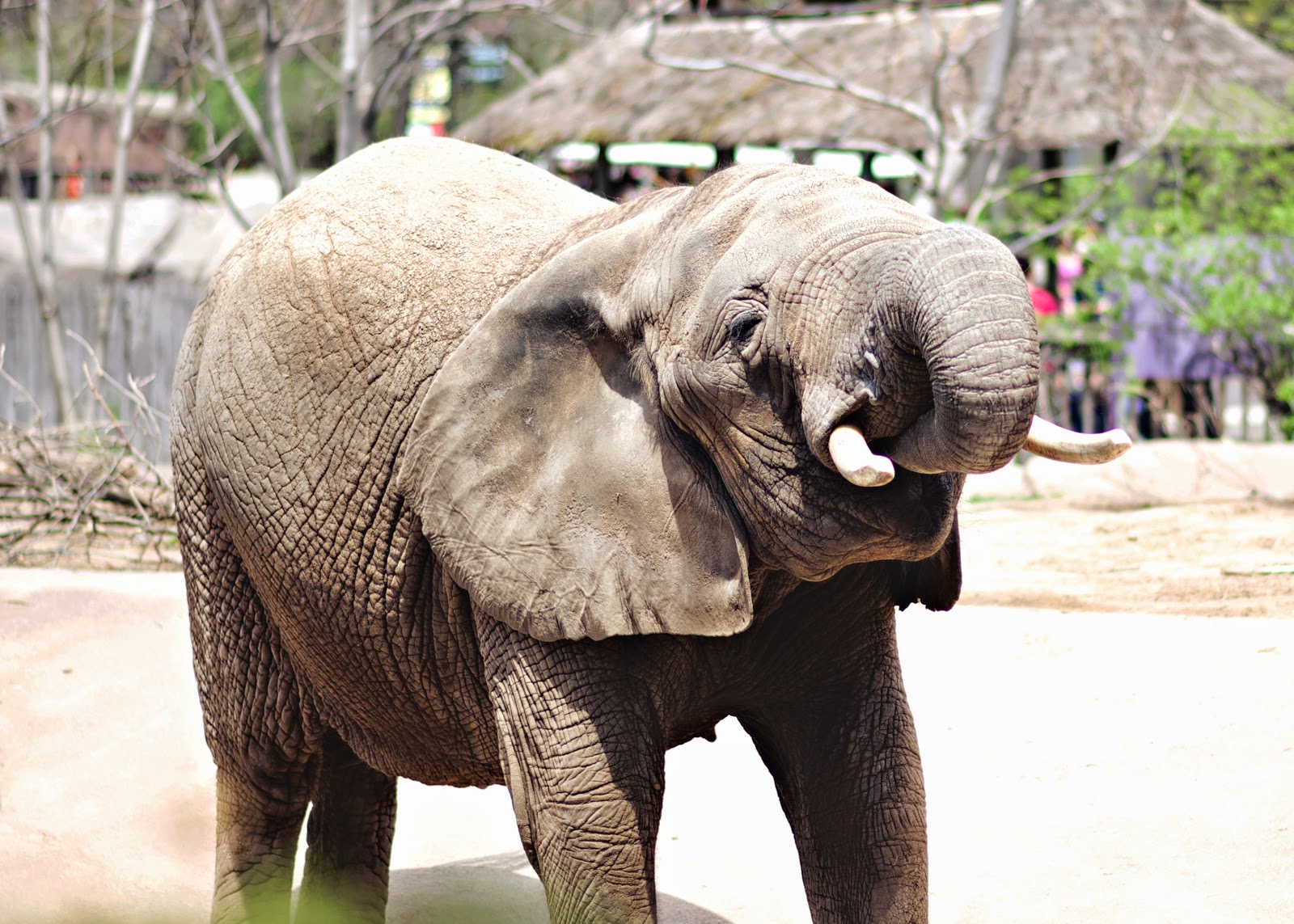 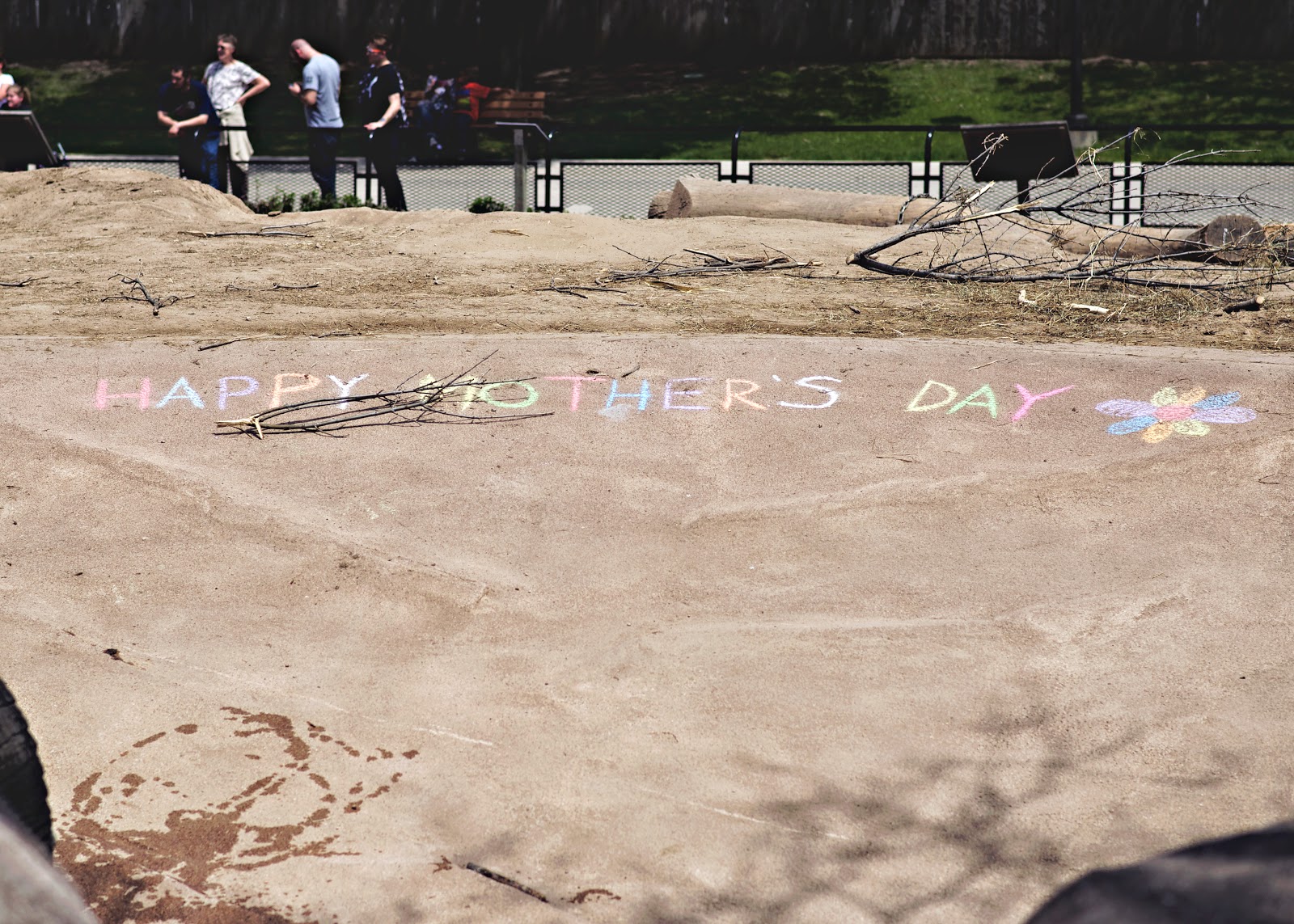 I swear, all of the animals were so mellow today.  Only one of the four giraffes cared to stroll around for people to see.  This one almost ate a bee.  I was aiming, ready to get a picture of it.  But... it didn't happen. 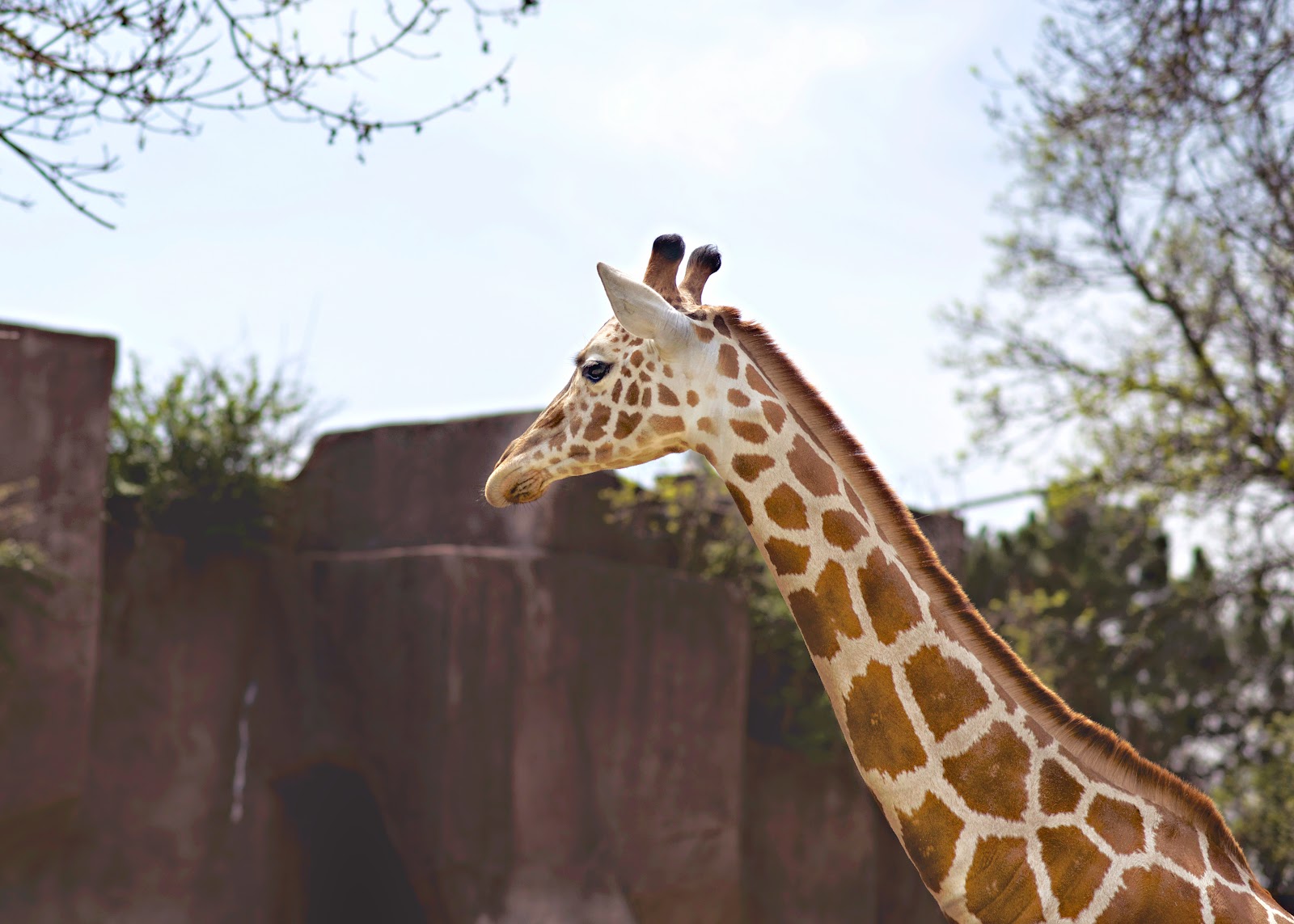 There's like a million peacocks at Milwaukee Zoo.  A million.  Here's one. 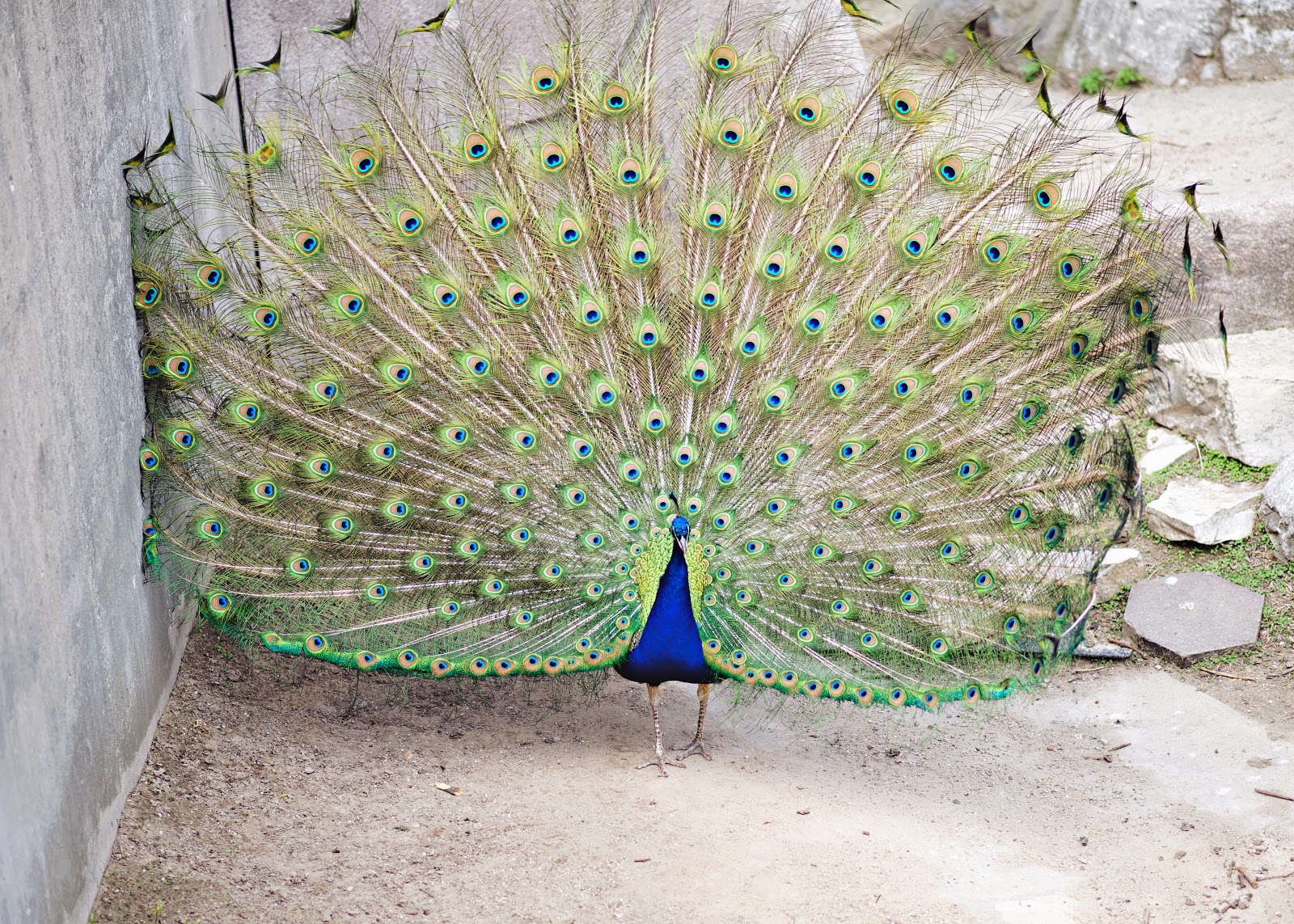 Black bears are always pretty awesome.  This dude had a dip in the water and then climbed up there to catch some rays. 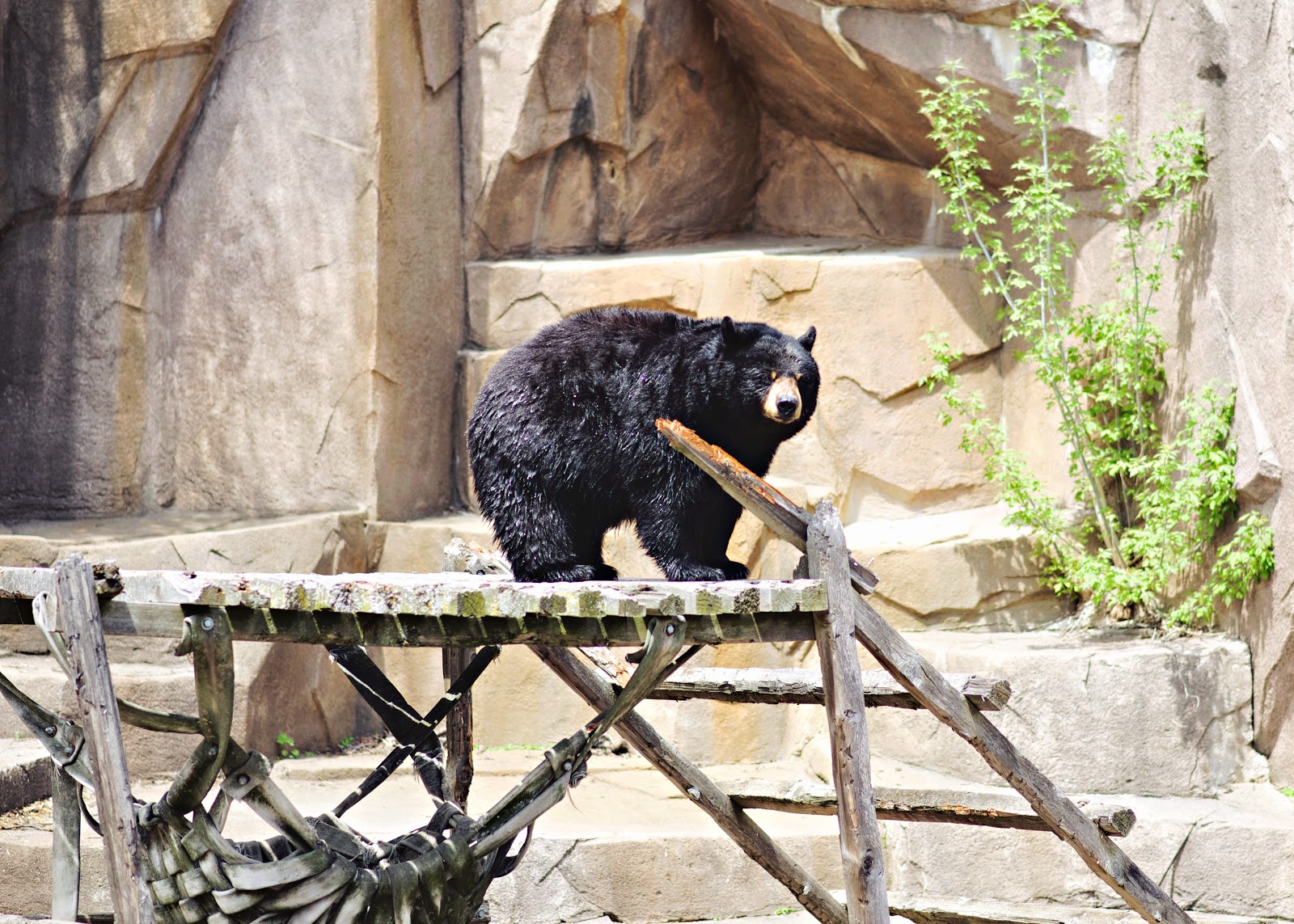 Lunch break came.  Well, a partial lunch break.  The boys ate in the car while we waited and waited and waited to get into the parking lot.  Mallory hadn't eaten yet though.  So we sat down to feed her and let the kids have some snacks.  Quentin must be paying a lot of attention lately to my constant need to have my camera out because he actually wanted to take a picture!  He wrapped his little arms around Andrew and pointed at my camera! 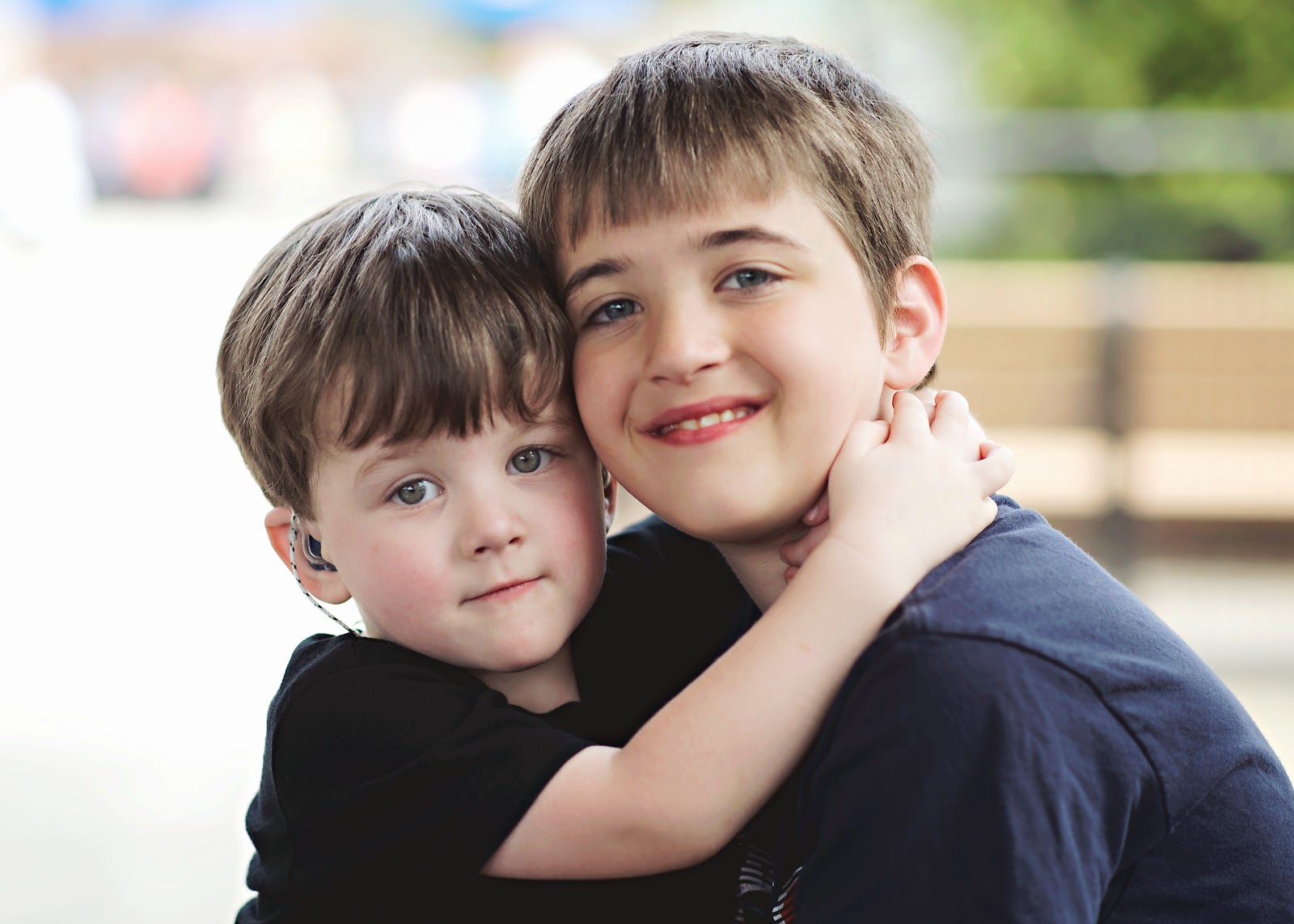 I was so excited that their photo went so well, I thought I'd get one of Jeremiah and Nick too.  Lovely, huh?  Not even on Mother's Day do they want their photos taken. 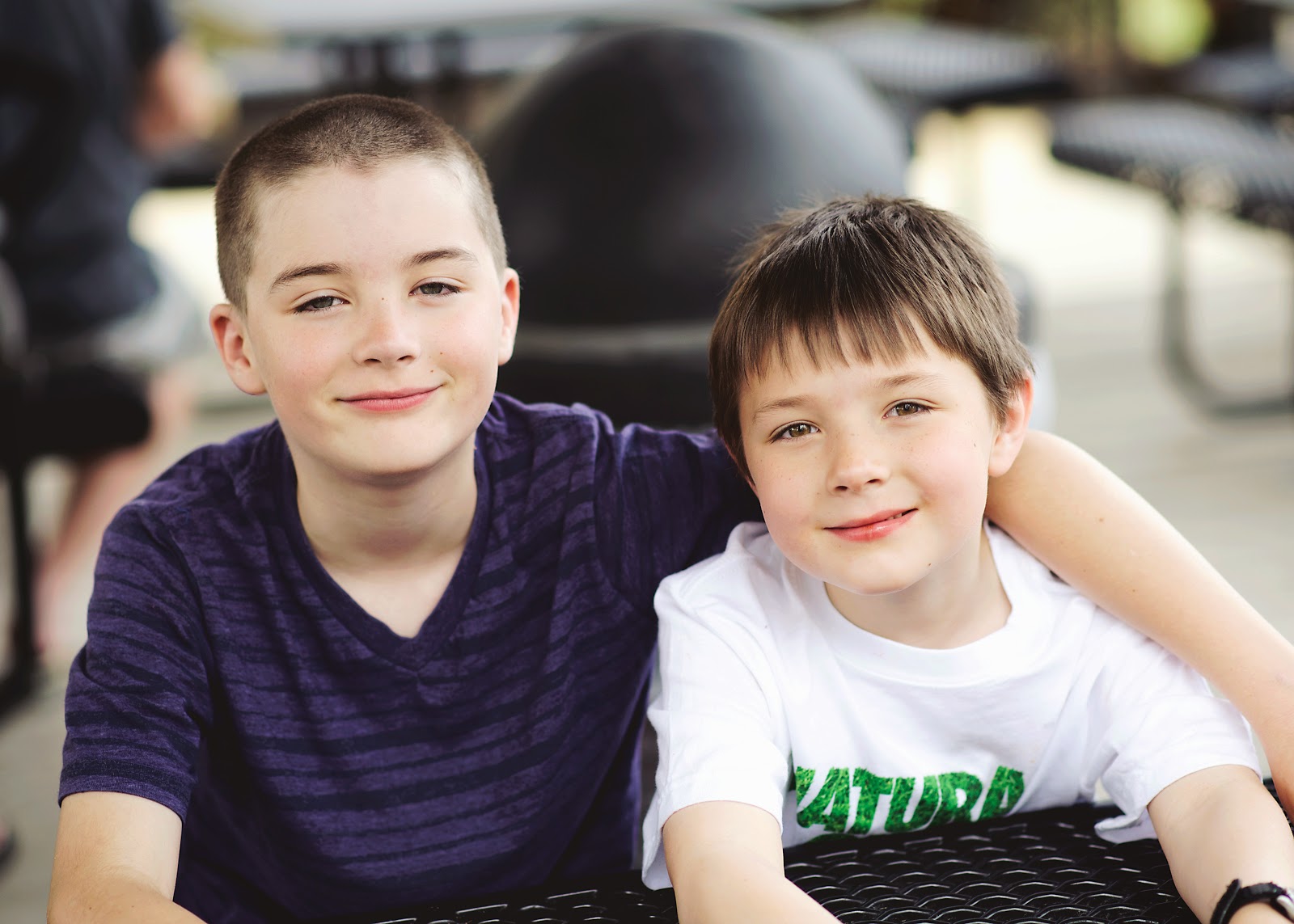 After snack time, we ventured to the aquatic animals.  Mallory was getting tired though, and when she decides she wants to sleep, she does acrobatics. 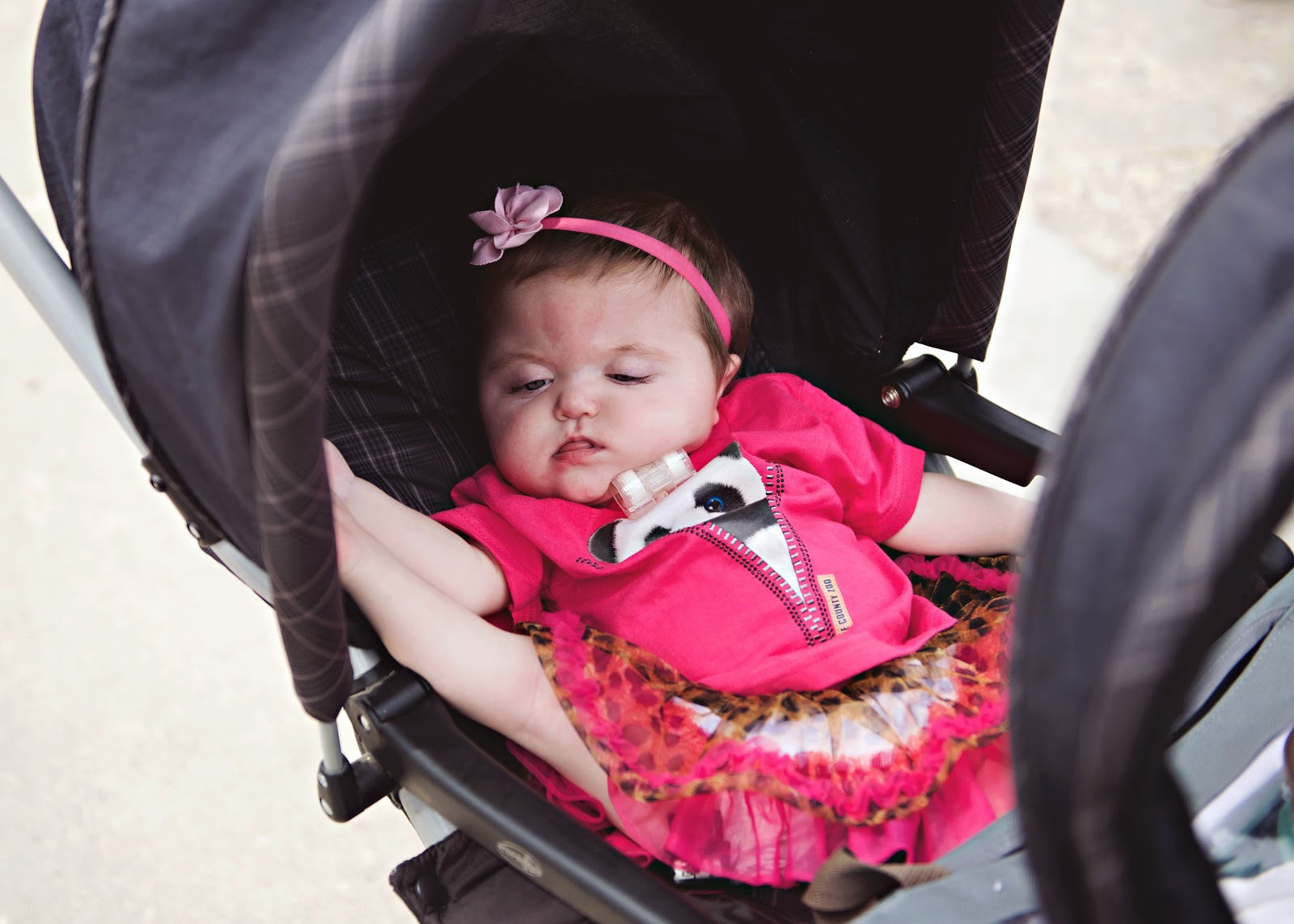 While she was doing that, we checked out the polar bear. 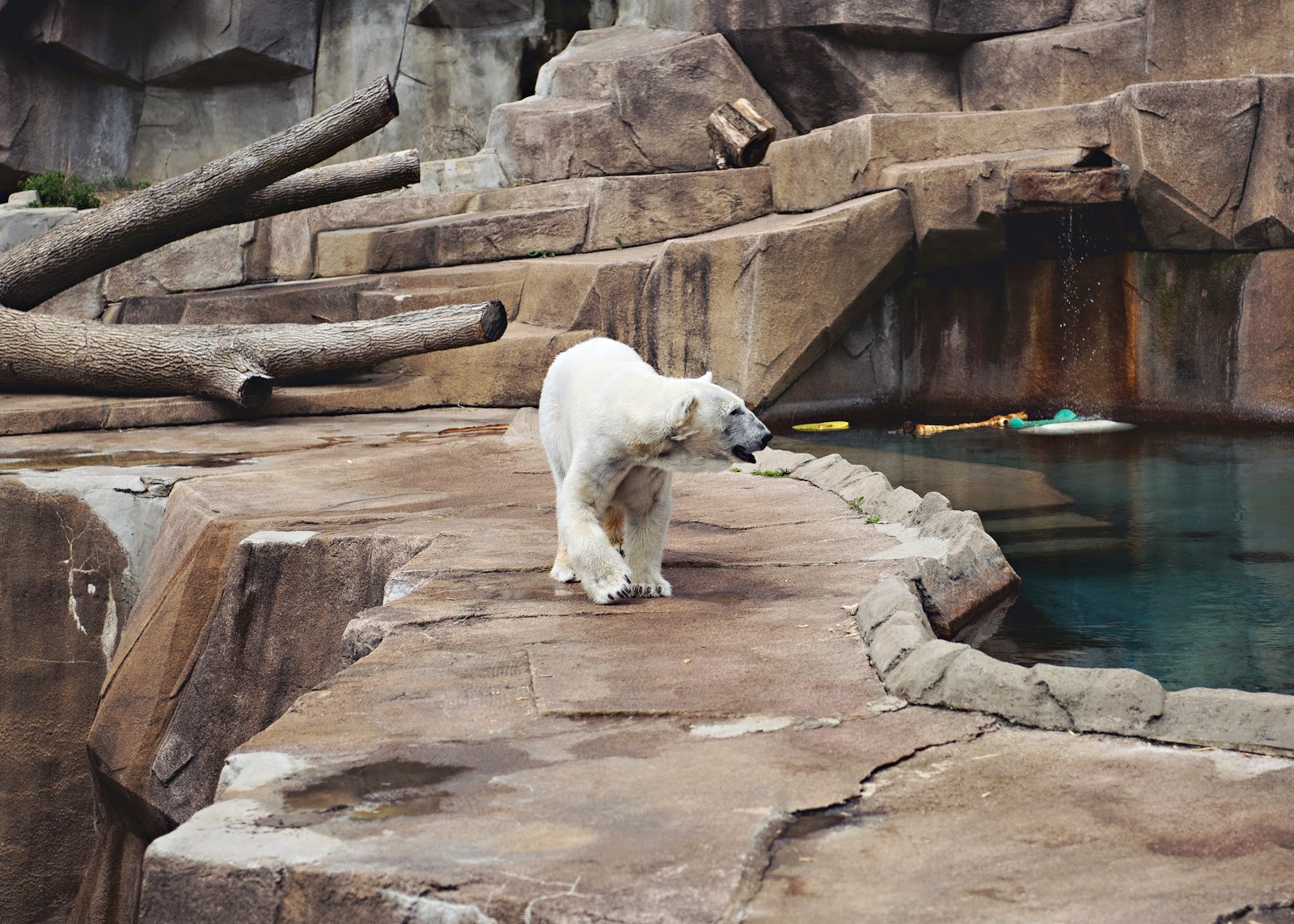 Then the kids wanted to go to the under water viewing and see the seals.  They're so cool.  I love seals! 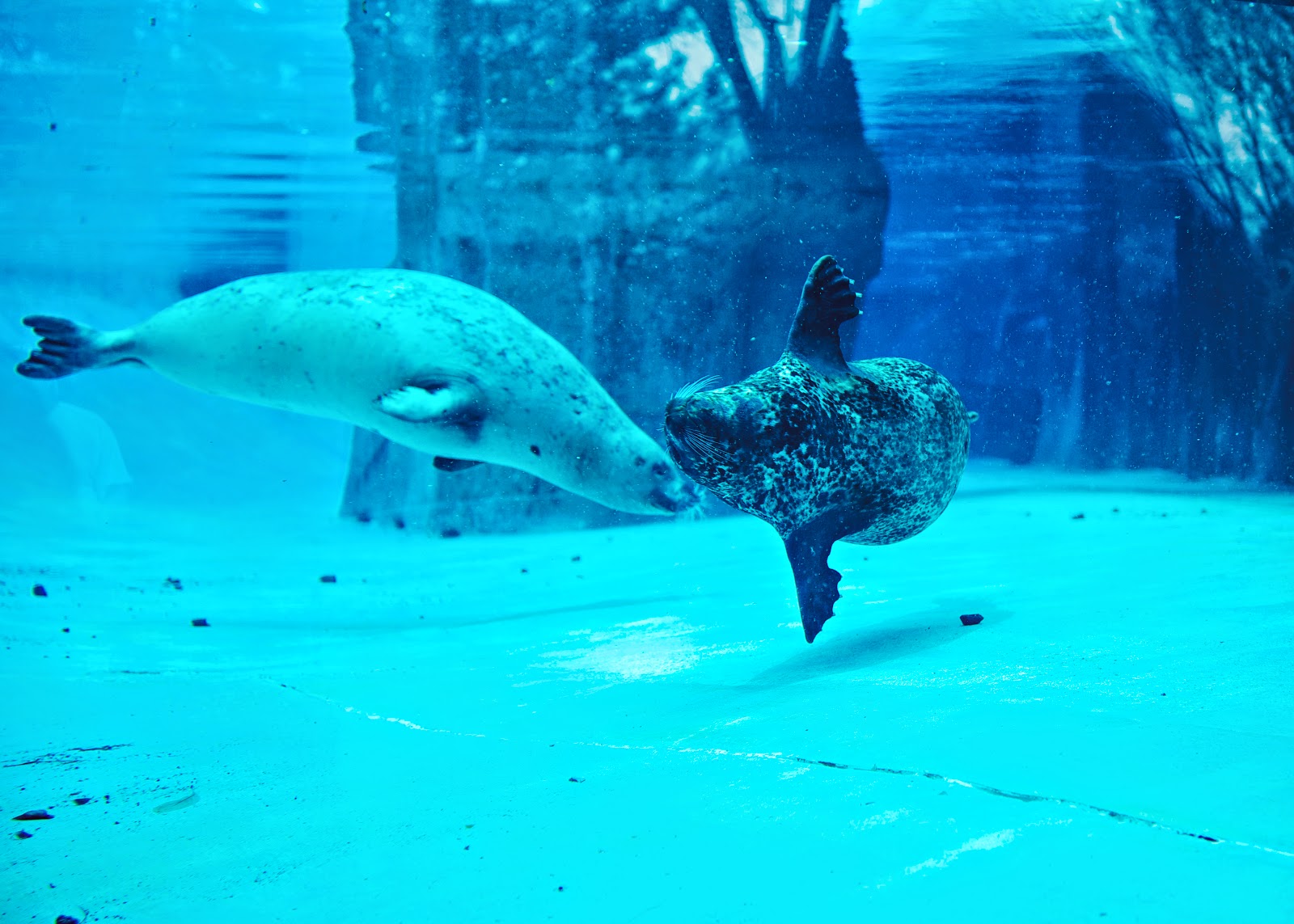 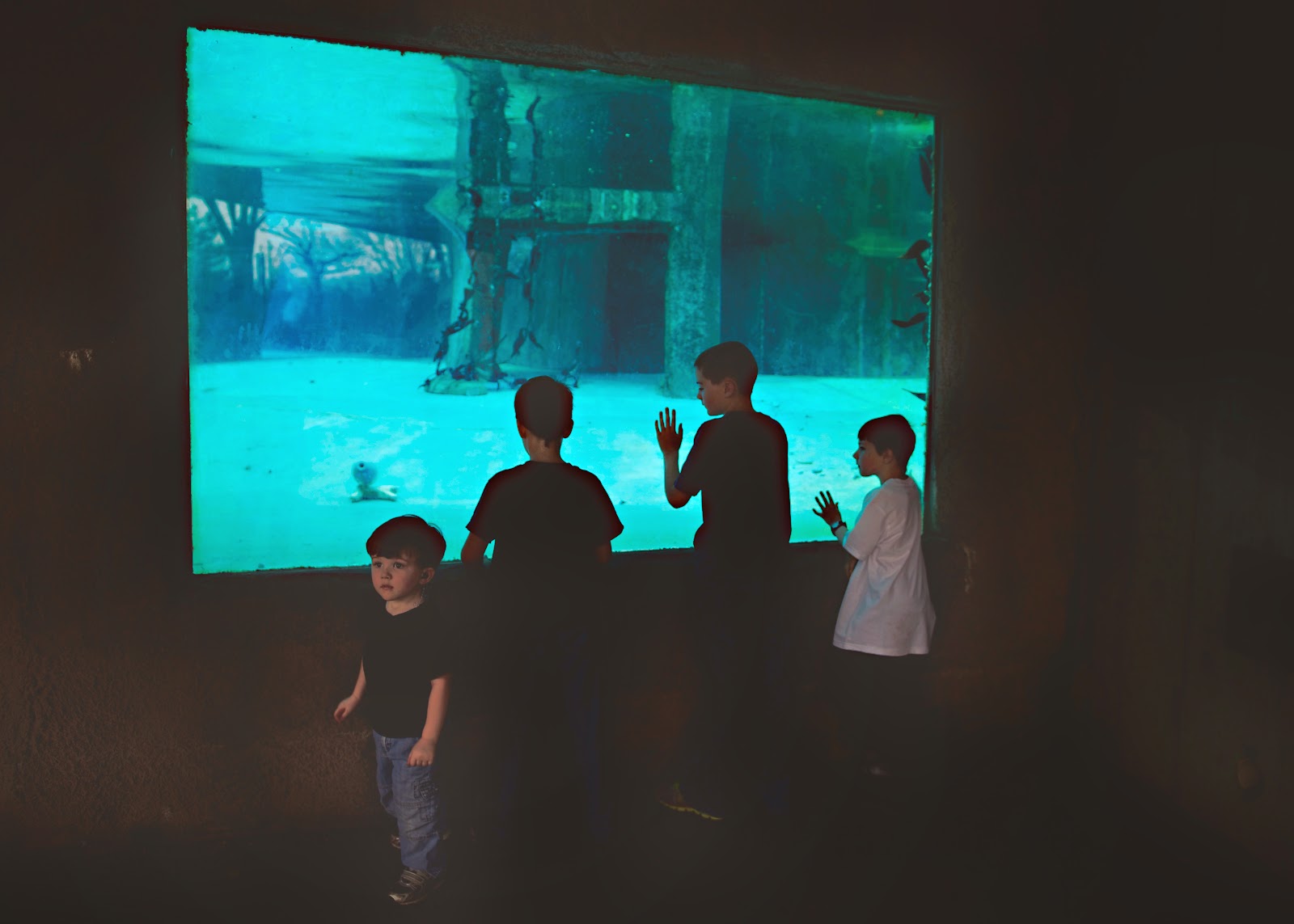 While we were heading back up from the seal viewing, there were these beautiful Magnolias.  They were seriously gorgeous.  Even the boys commented on how pretty they were!  (Maybe they could have thrown in there a 'not as pretty as Mommy'.. but hey... !) 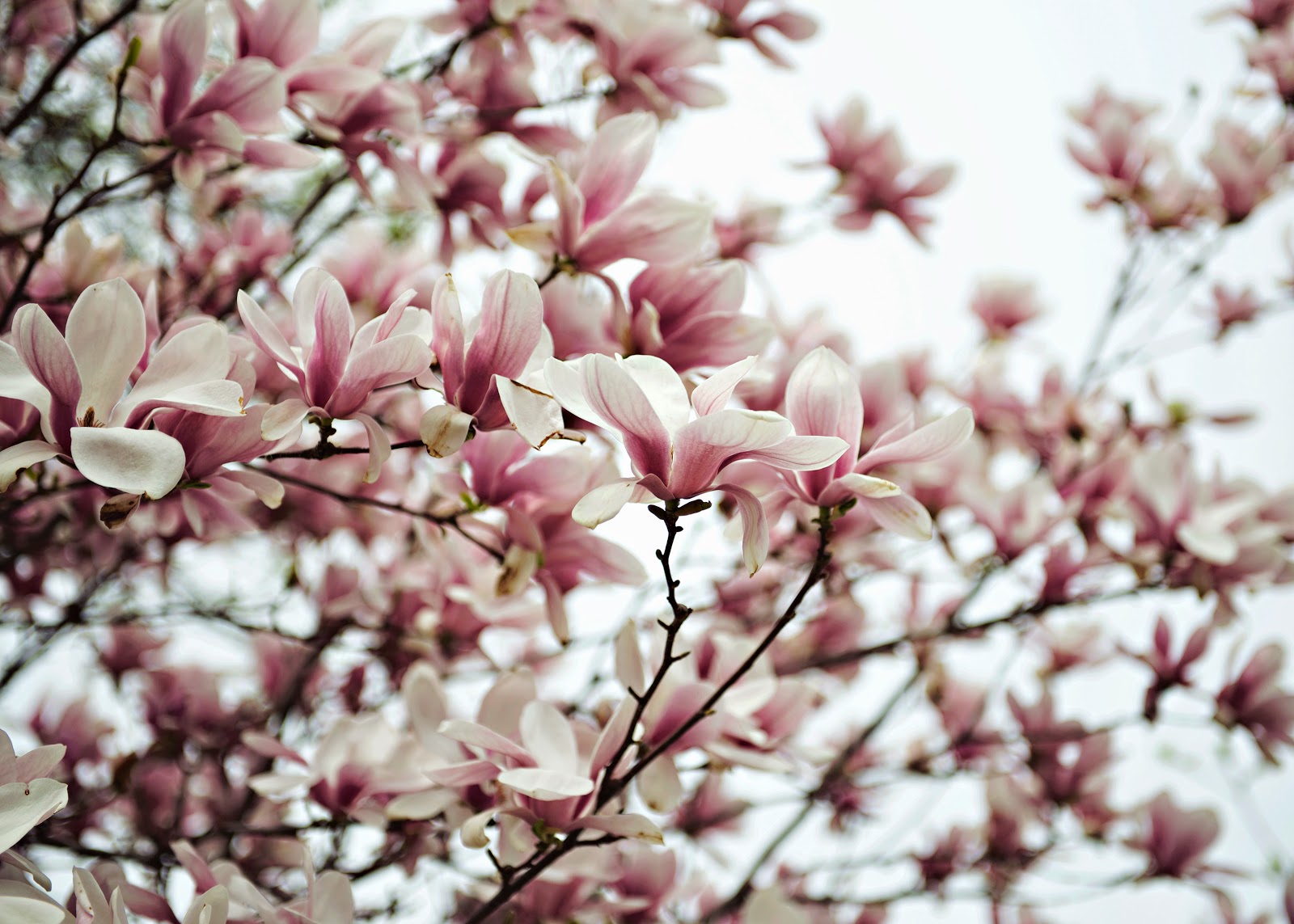 We didn't spend much time at the zoo.  I wasn't sure how long Mallory would hold out but Quentin seemed to get tired the fastest.  So we decided it was time to head to the gift shop (that's where the boys wanted to go the most... to spend all the money they'd been saving!), and then head out.

While on our way there, we saw this peacock just randomly strolling around.  Quentin got all excited when he saw it and grabbed Frank's hand to go see.  This kid is fearless.  (No joke... when we got home today he saw a spider on the ceiling.  He wanted Frank to lift him up to see it.  Once he got close enough to the ceiling he slammed his hand at it.  Just missing it.  Frank and I jumped more than he did!)  Anyway, he pretty much chased this peacock down the hill. 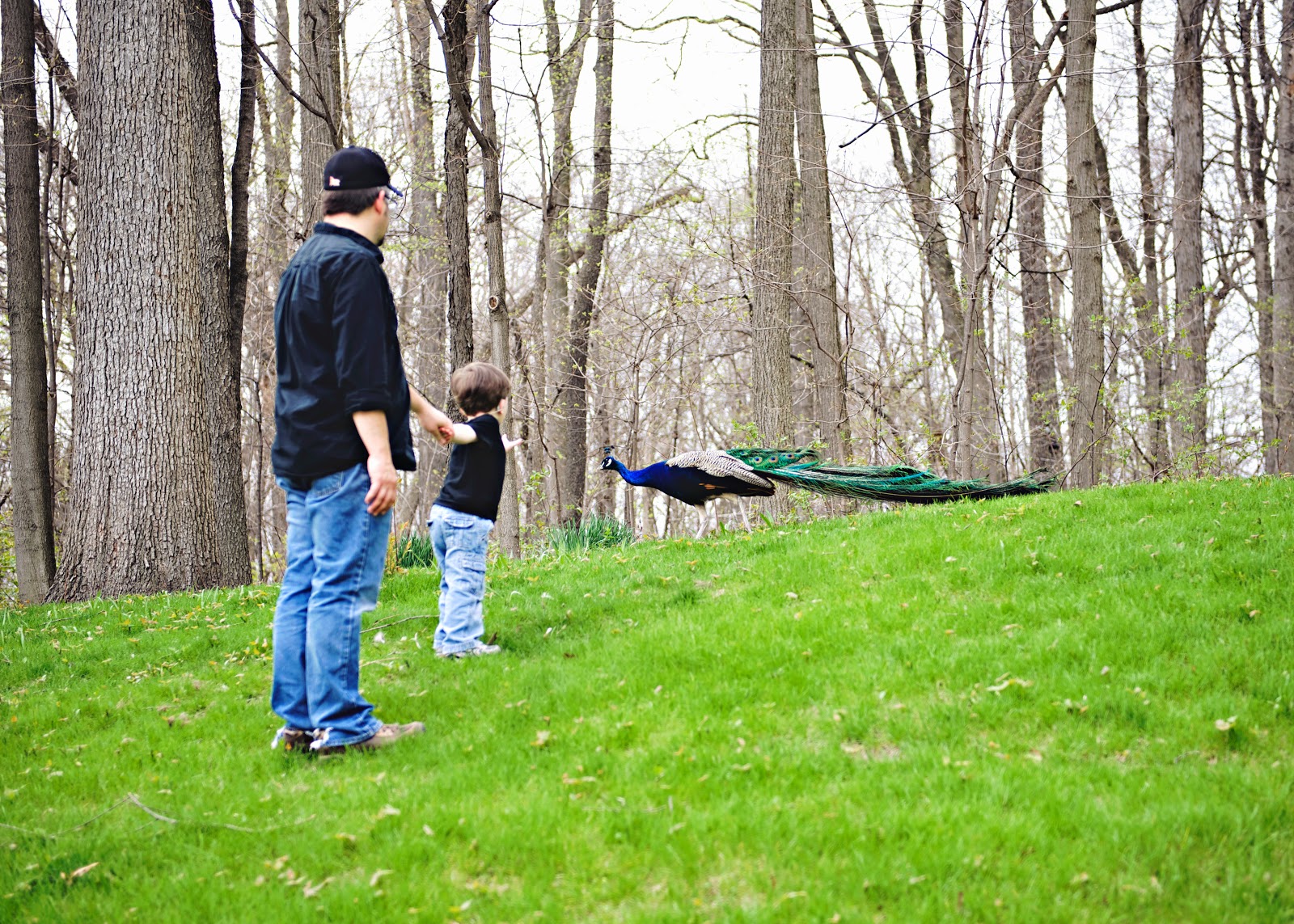 Once we reached the zoo gates, the boys wanted to see the penguins.  I did too, but I didn't want to stroll up a hill to see them.  They were all hiding.  Thanks penguins.  Could've at least been personable on Mother's Day.  In the mean time, I took some photo ops with Mallory. 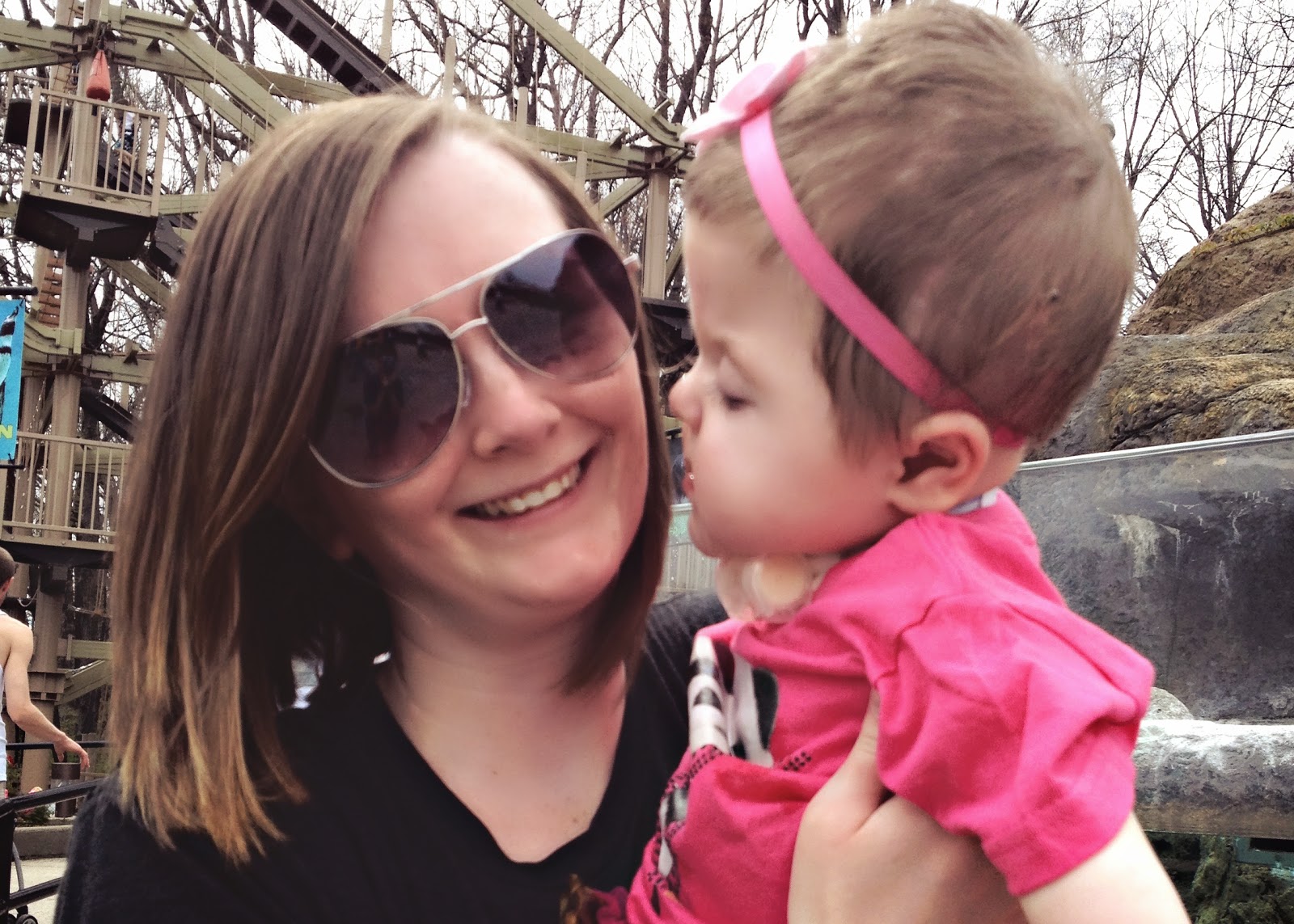 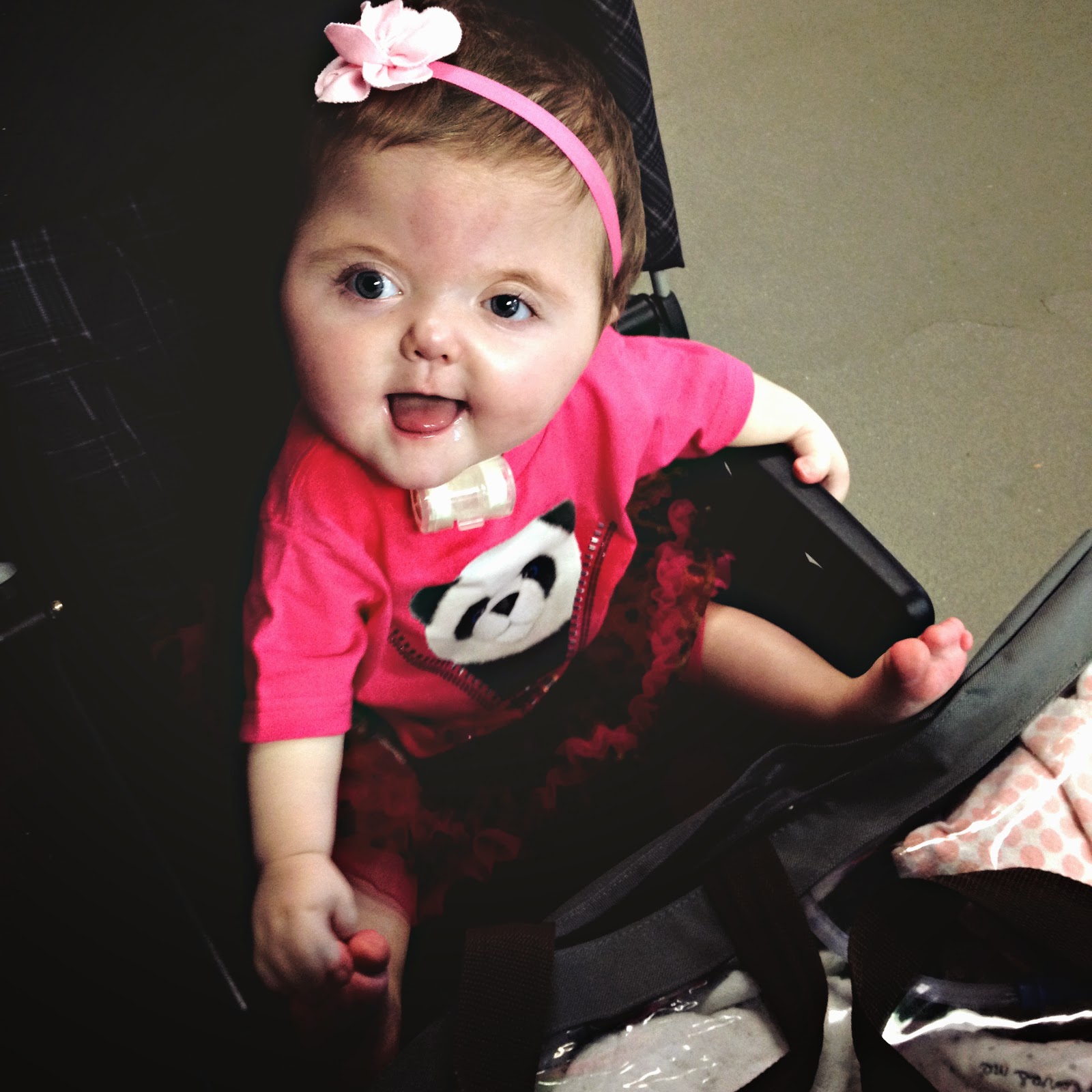 The gift shop was a debacle.  As most things with young kids are.  Nicholas picked one of those plastic snake puppets with the handle, Andrew picked a very large, plush, stuffed snake and Quentin picked out a toy truck.  Jeremiah didn't seem to want anything.  He was standing with me at the register with a Pepsi in hand and said he didn't really see anything he liked.  As the lady was ringing us up I kept asking if he was sure.  Right in front of us there was a bunch of stuff.  I asks him if he wanted a friendship bracelet, or a frog mask, or a temporary tattoo.  None of it seemed of interest.  then I saw a sign.  I asked him if he wanted that and he said, "well, that's pretty funny".  It's now hanging on their bedroom door. 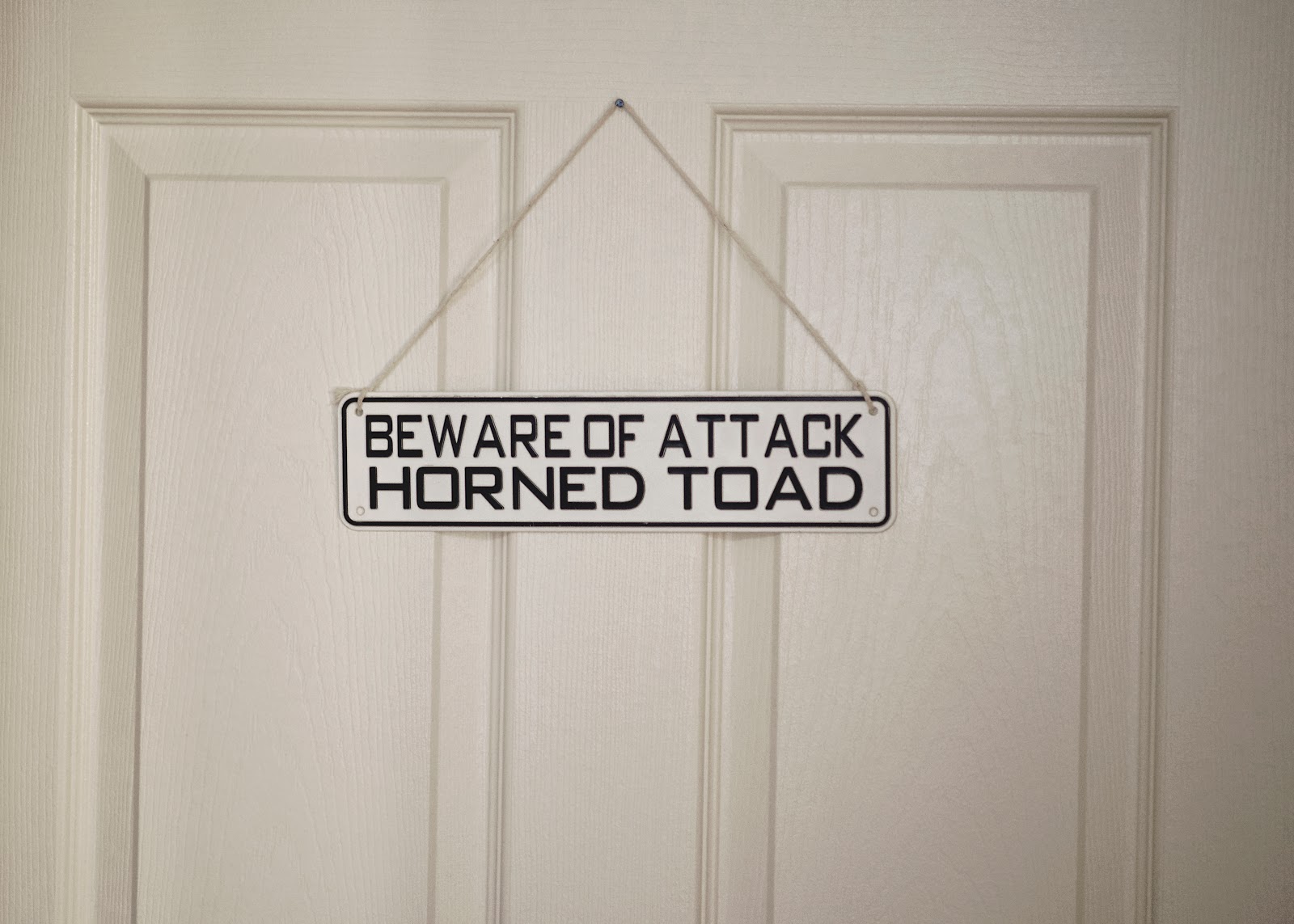 In addition, Andrew and Jeremiah picked out a ring for me.  It was a zoo ring.  But a lovely zoo ring. I love that my boys picked that out for me.  It made me feel really special! 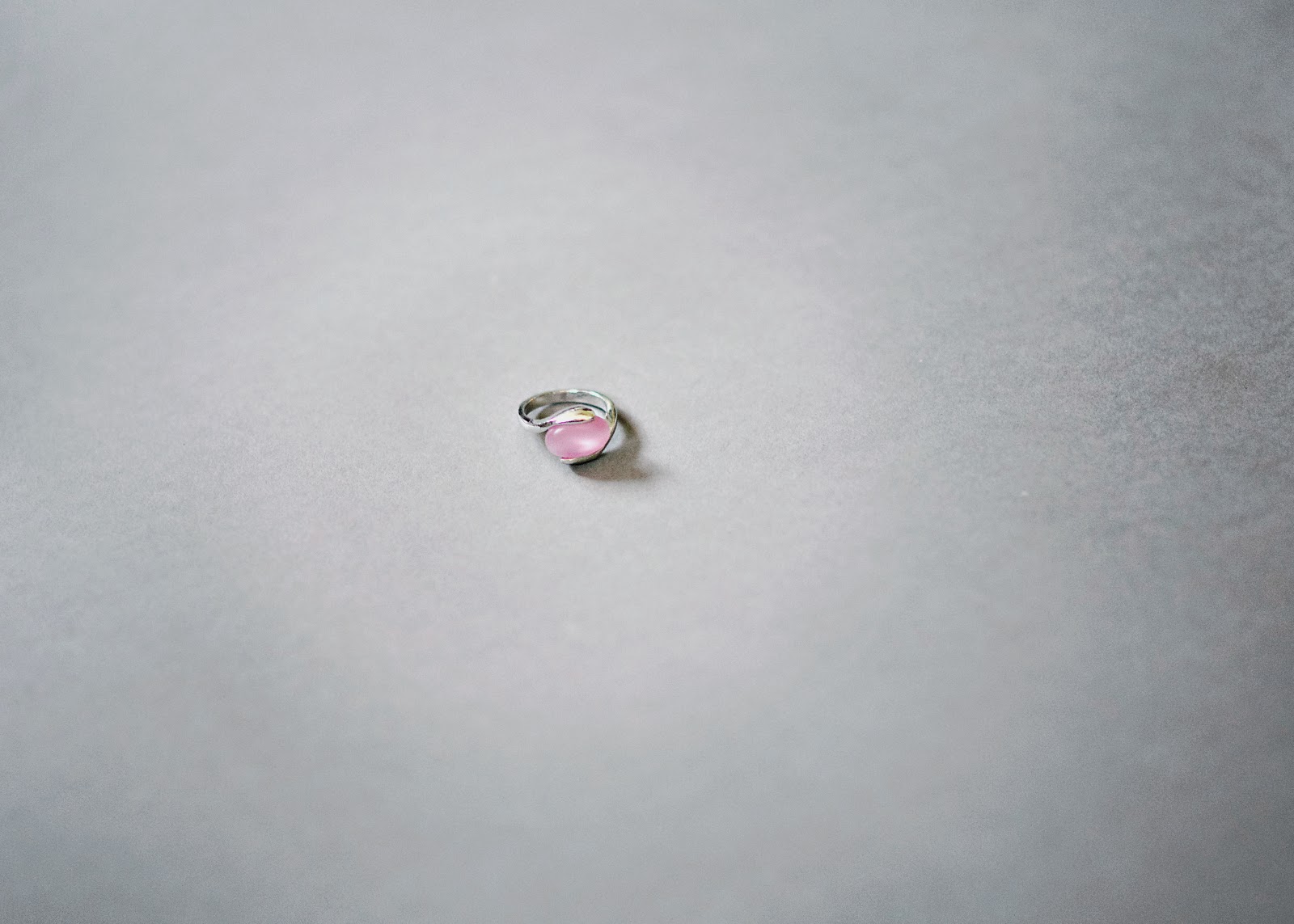 Quentin.  Oh, Quentin.  LOVED the zoo today!  So much running round that it pooped him out!! 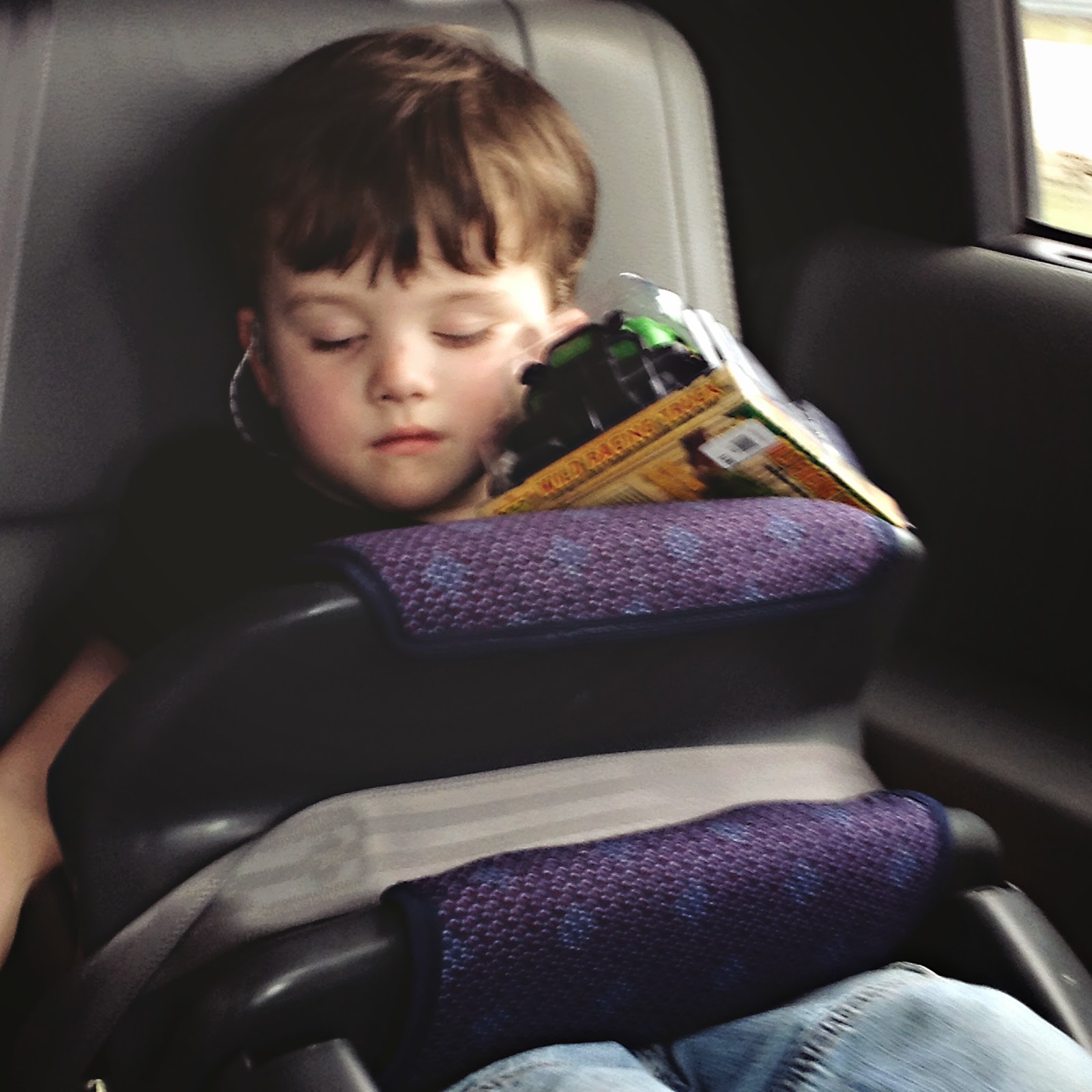 Once we got home, it was back to business.  Getting the house back in order and preparing for another week with out the husband.  He made me the Mother's Day dinner I requested, a lemon orzo pasta salad.  TASTY!

I didn't get to spend much time with my oldest today though, so I made him take a selfie with me!  I totally look like a teenager.  Yep!  Totally not an old fart! 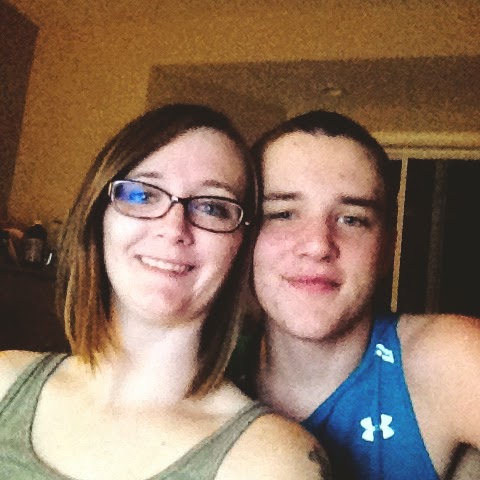 I hope all the wonderful Momma's out there had a great Mother's Day!  I know I did!  I loved the zoo and enjoying my family today!  Now... onto the grueling week ahead!