I'm sure much like every other parent, I've been trying like hell to get my kids out of this house this summer.  Or at least working hard to keep them off the video games.  Damn those video games.  Day in and day out, that's all they want to do!

I fight them tooth and nail.  Tell them they should find something else.  Sometimes they win the fight.  I'm at least smart when I let them win though, like getting a newly cleaned bathroom or a mopped floor out of it.  Plus, the more time spent on chores, the less time behind the zombie creator.

Every so often I win the battle and get them doing something else.  They come up with cool stuff too.  They spent like three days straight last week sleeping in forts that they didn't want to take down because they worked too hard to build them.  After they saw the Lego Movie for the first time they spent days building really awesome things (with out directions).  Today was no different and fun to watch as well.

After lunch time the sharks started circling.  It's a daily occurrence.  I think they must draw straws to find out who will be the one to speak to me first.  "Mom?", says one of them... in all honesty, I have no clue which one it was.  I was preoccupied trying to feed Mallory.  My immediate response was, "No."

The shoulders always fall and the smiles turn to frowns, and then I utter their favorite words, "go find something else to do.".  "Okay, Mom."  I tell them that it's nice outside and they should do something outdoors.

Jeremiah, Andrew, Nicholas and Quentin get all geared up and head outside.  They run around for a bit, swing on the swings... normal outdoors stuff.  Then, Andrew peeks his head inside and asks me if there is any water stuff to do.  He even insisted that I run to the dollar store to get balloons for them to fill with water (which I have in fact inserted in the back of my head to try on another day).  I told them if they could locate the sprinkler in the garage, that they would be more than welcome to partake in that action.

Took minutes.  Literally.  They all run in the house looking for swim trunks, completely psyched about their discovery.  Minutes after that, the fun was beginning. 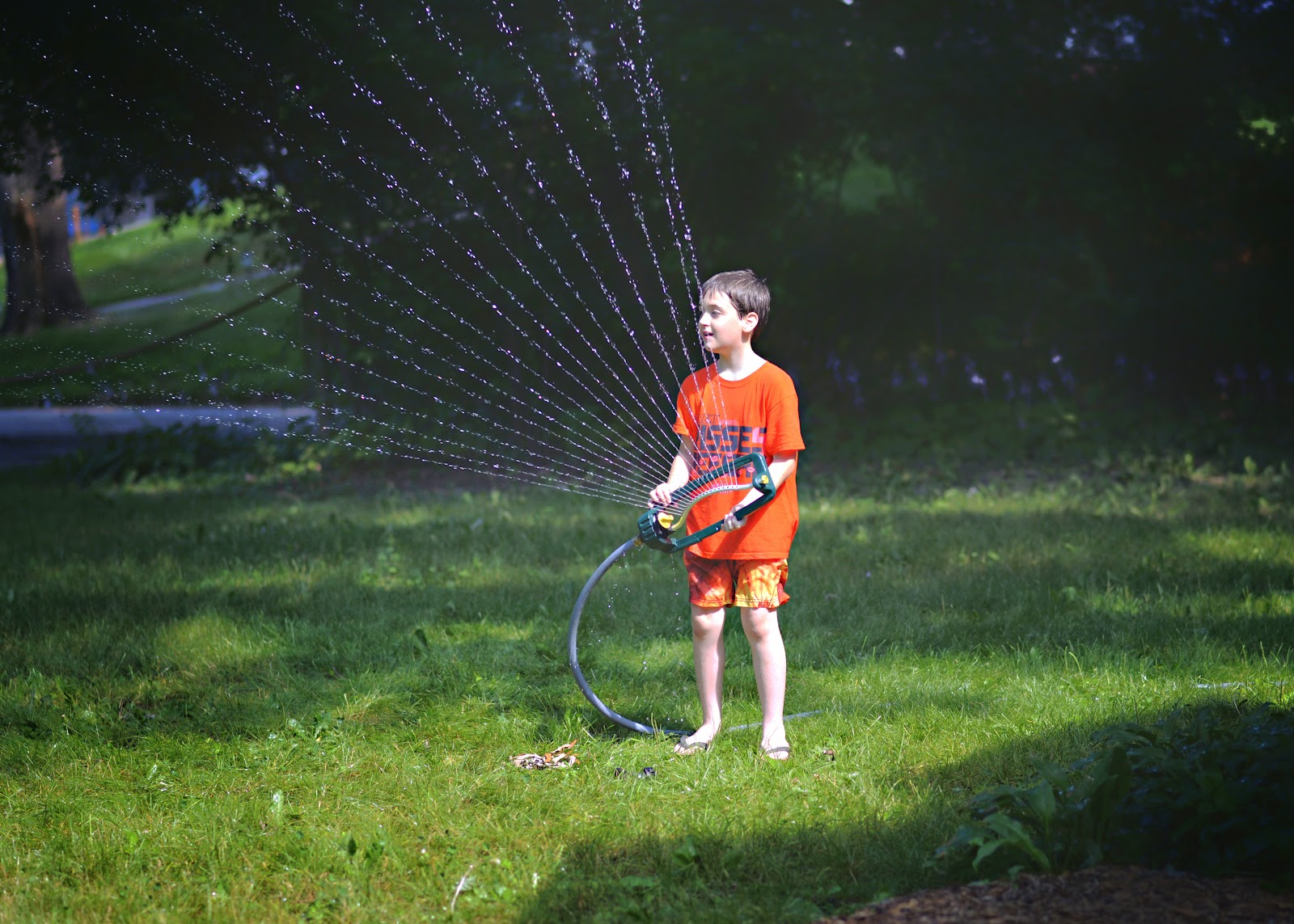 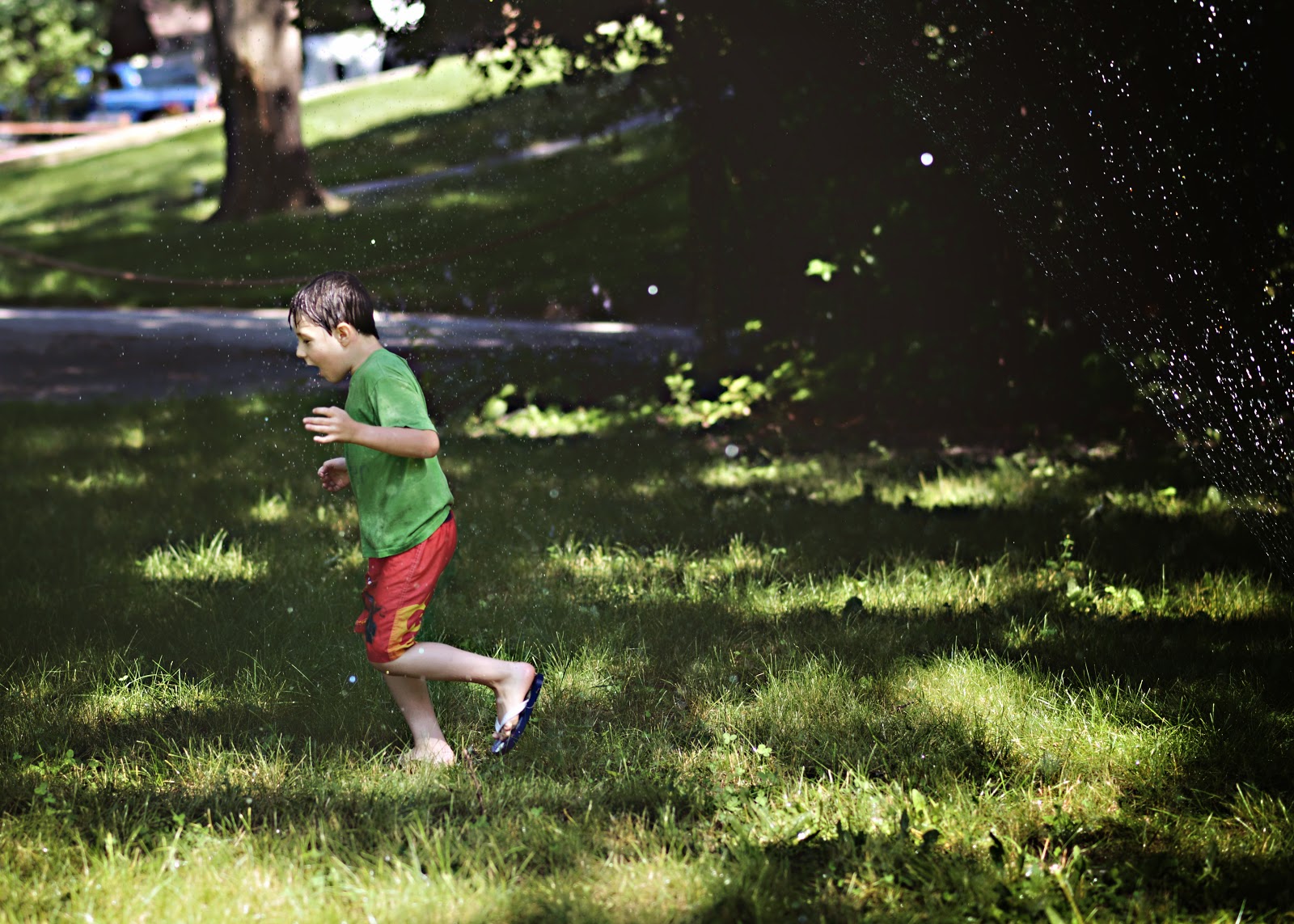 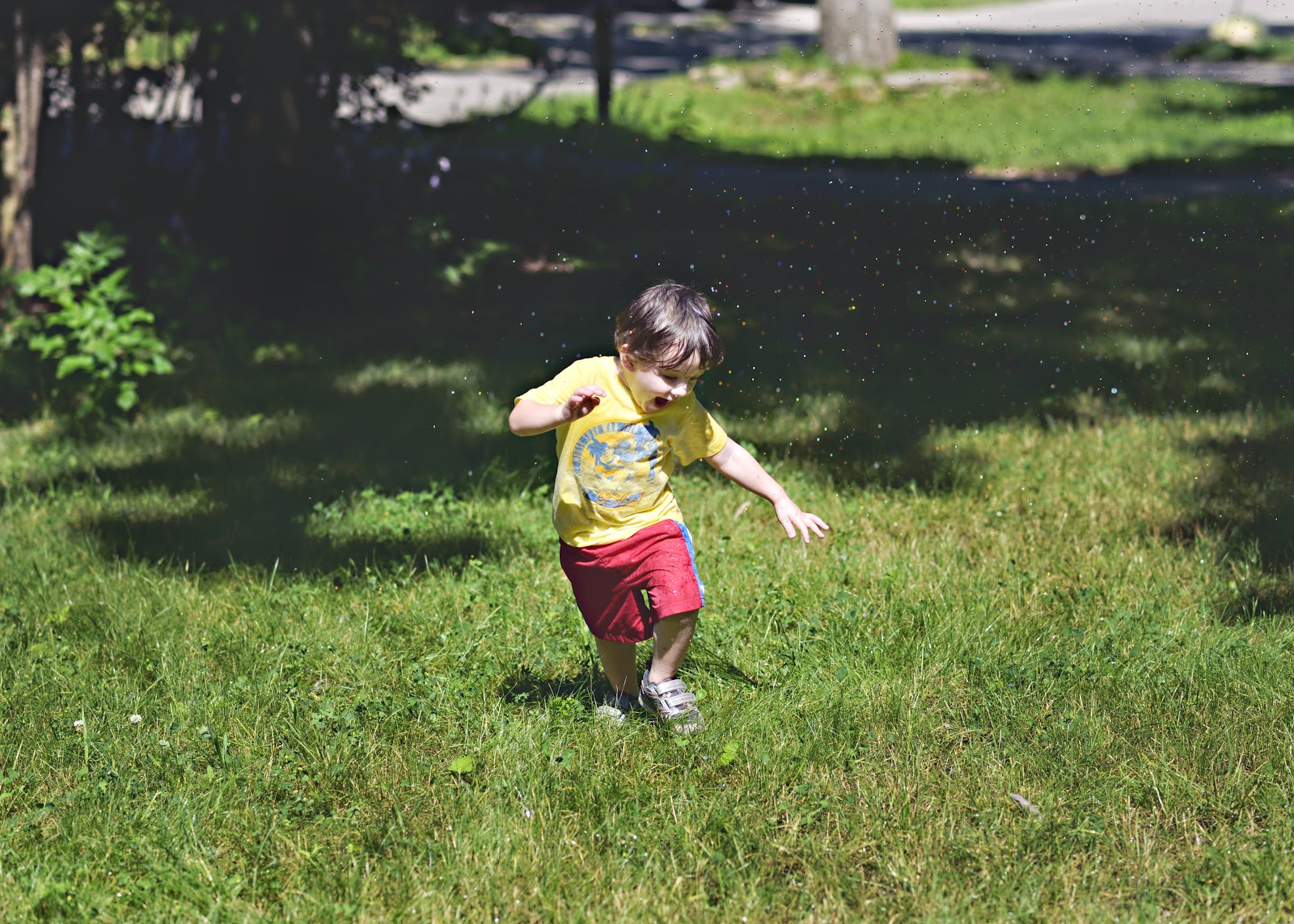 Then, they came up with a game.  The title of this blog.  Drip, drip, splash.  What was amazing was actually watching Quentin follow along with what his brothers were doing and having a blast right along with them.

What is drip, drip, splash?  It's kind of like duck, duck, goose... but with water.  One would be in charge of filling a bucket with water while the others gathered (and apparently squatted) and waited to be "dripped". 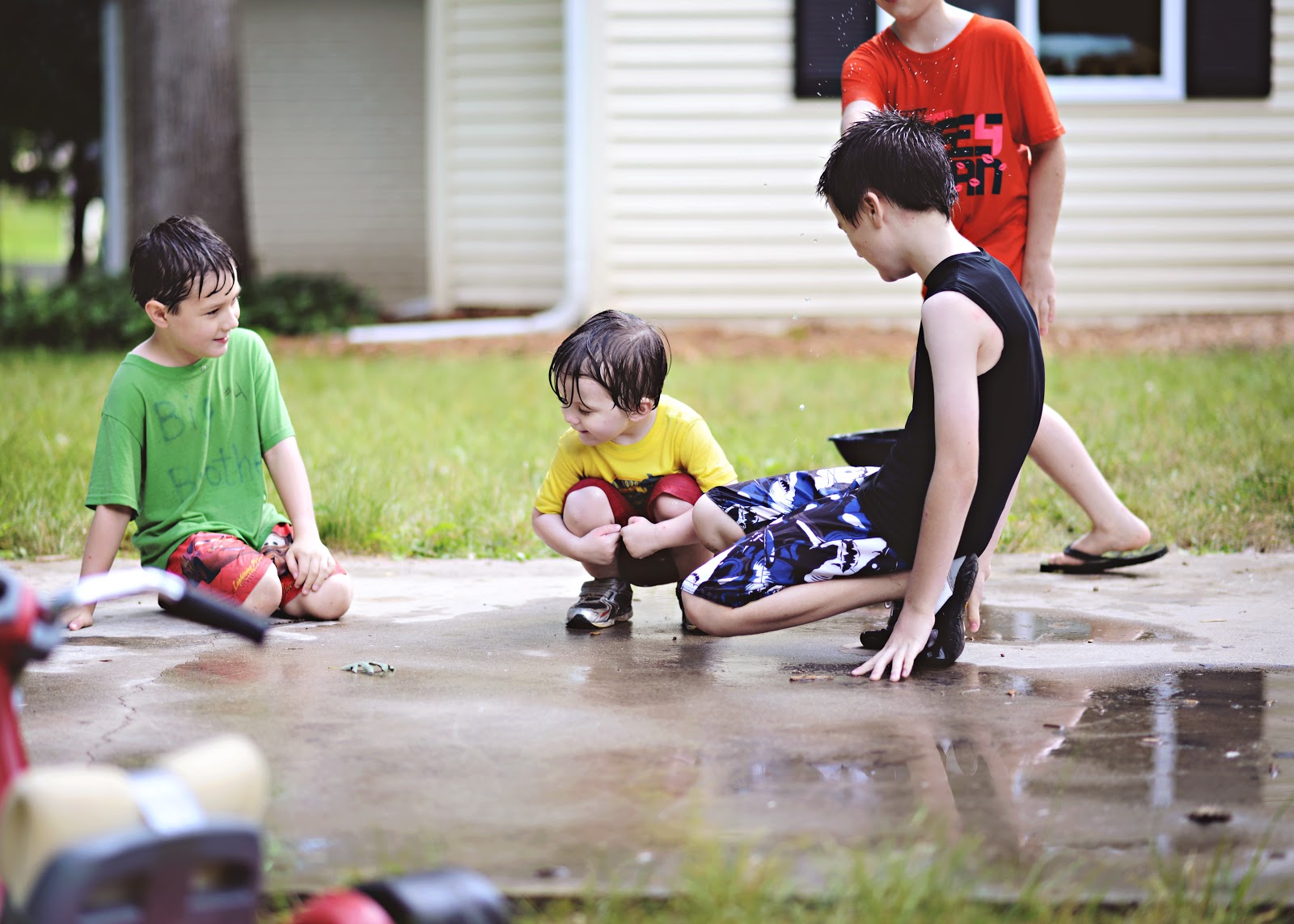 Instead of the "goose" part, the "splash" would be getting an entire bucket of water dumped on your head.  I was a little surprised that they targeted Quentin so quickly!  I watched as he was looking around and smiling, getting "dripped" and waiting to see what would happen next.

Then, it came.  The "splash".  Poor Quentin, never saw it coming. 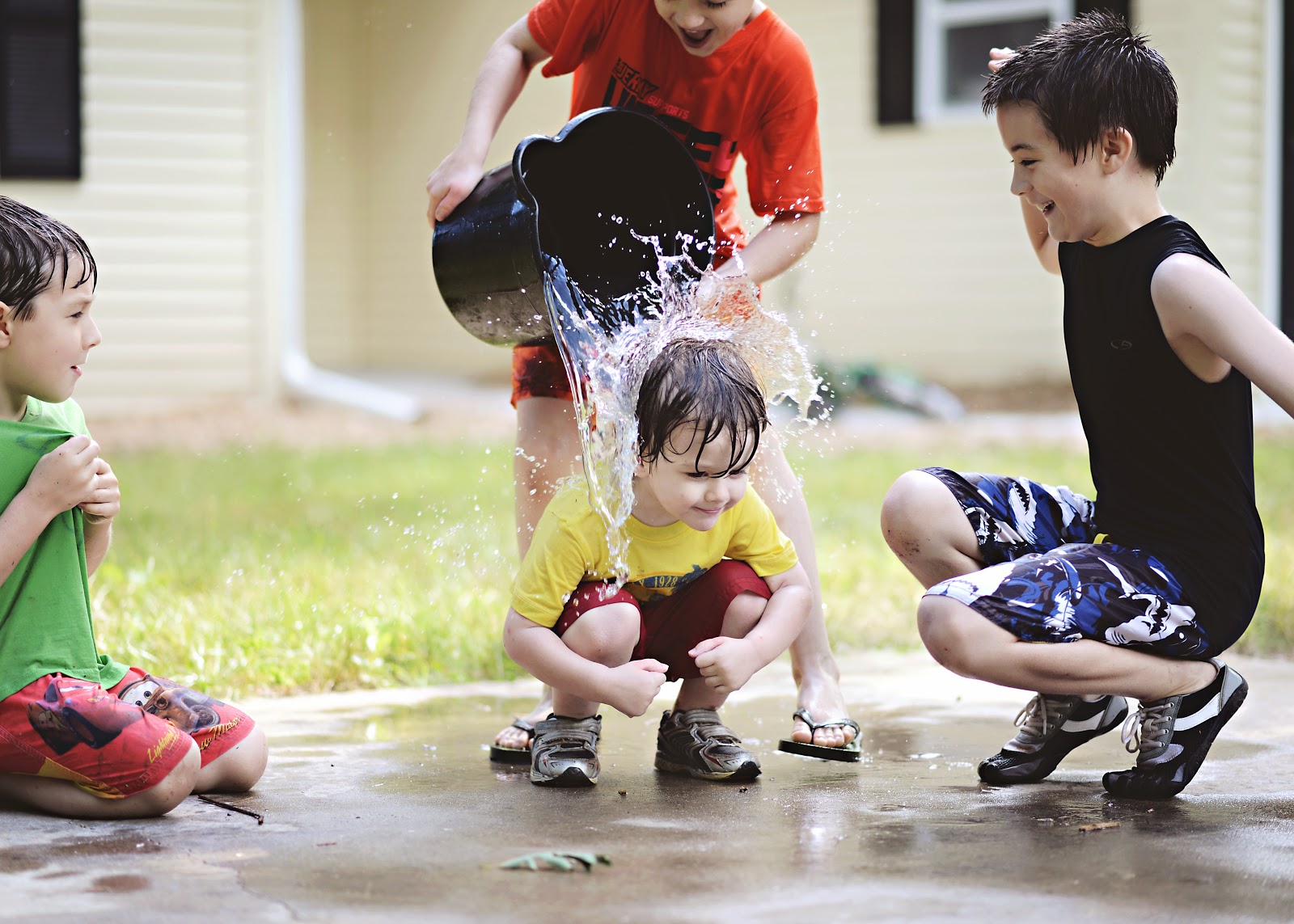 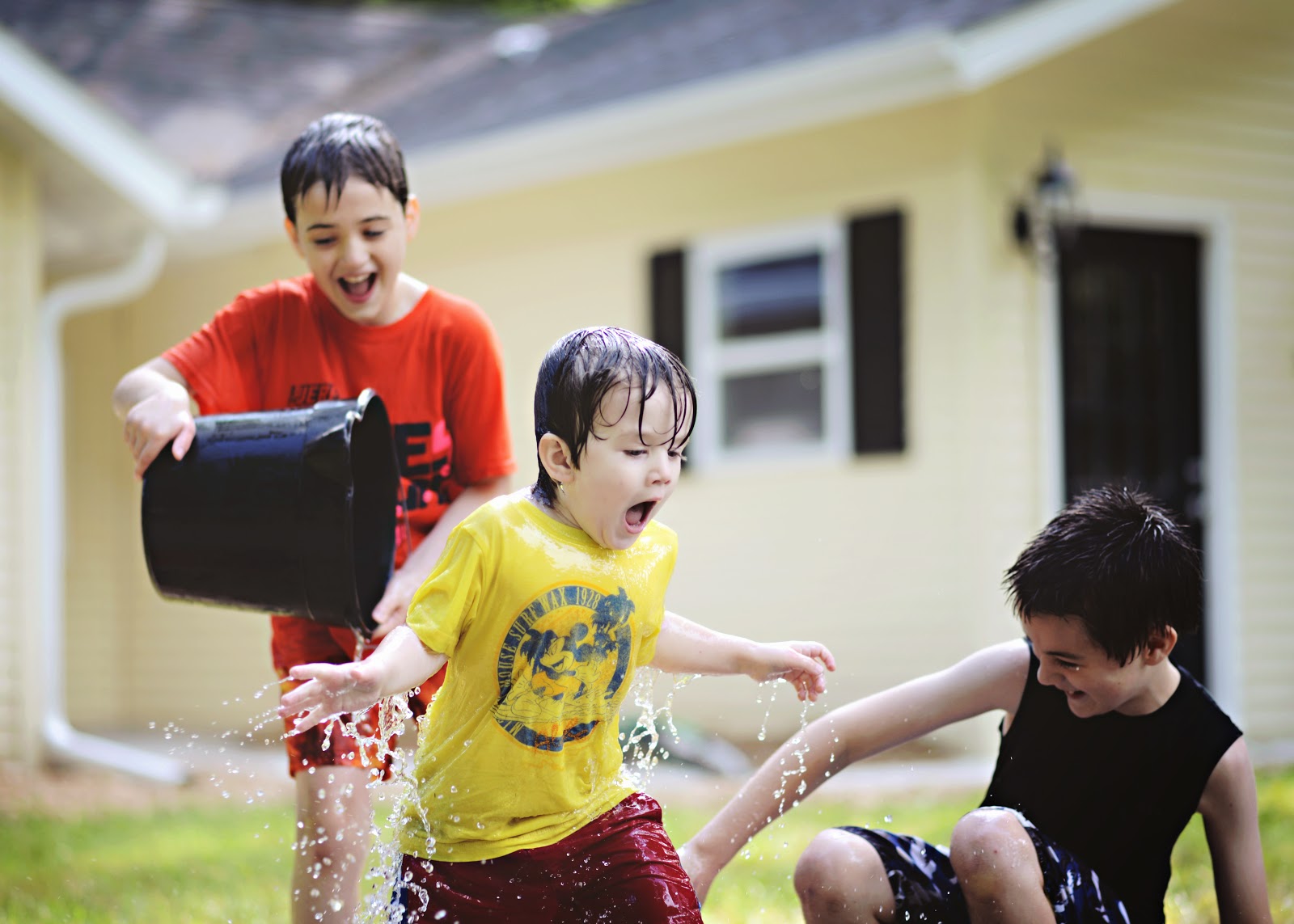 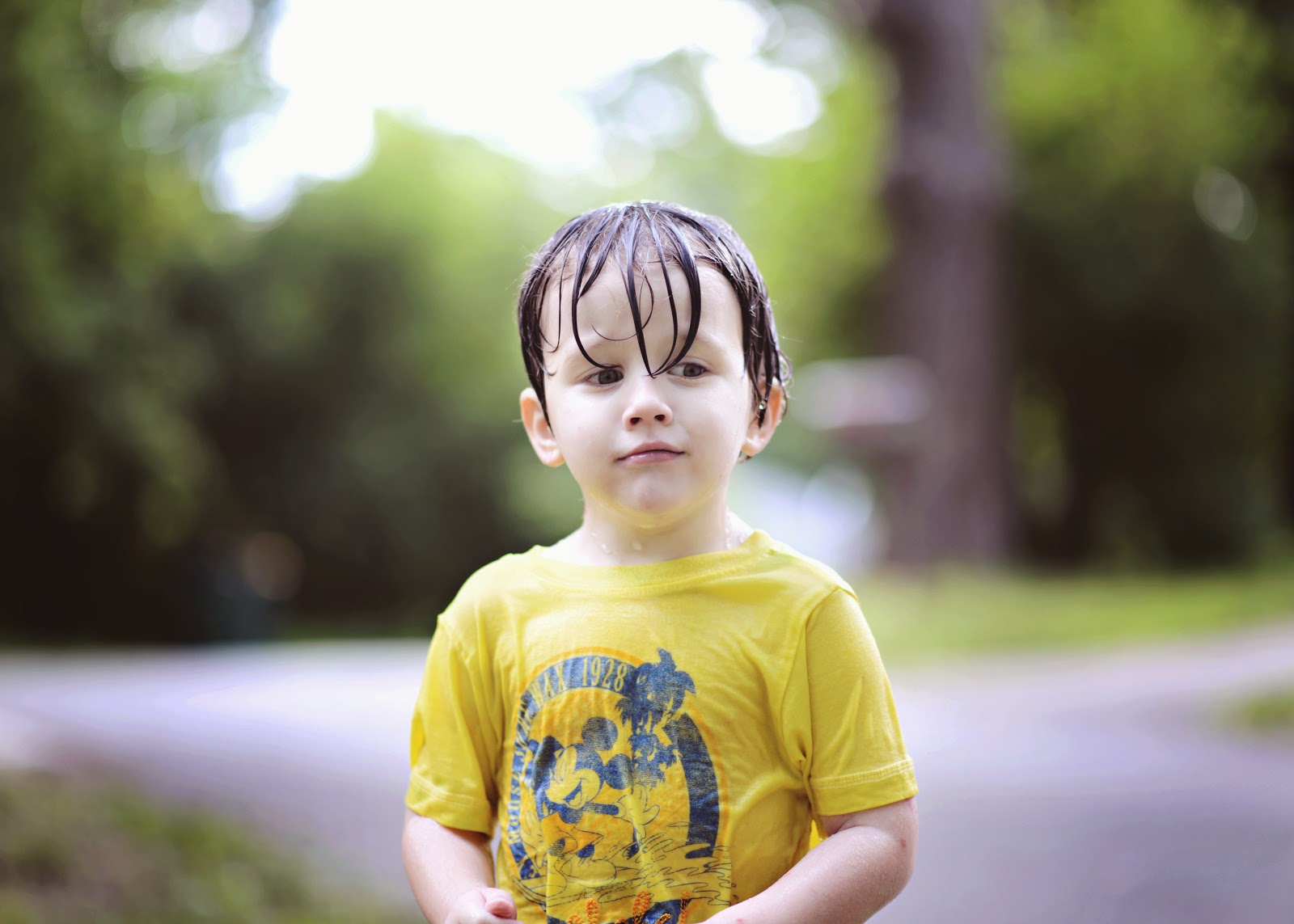 Afterwards, he knew it was his time for revenge.  His big brothers got the water ready as Quentin brought the bucket. 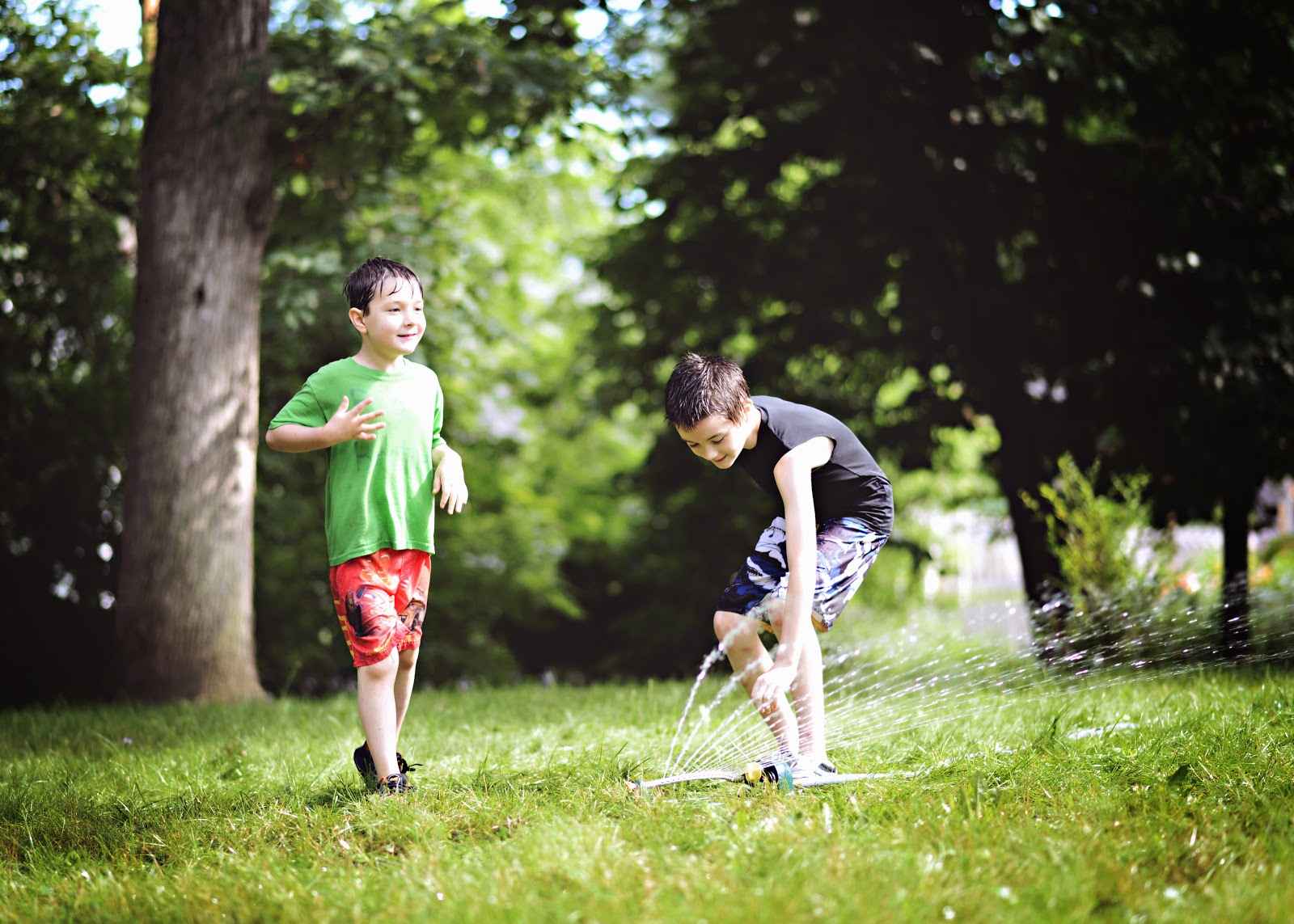 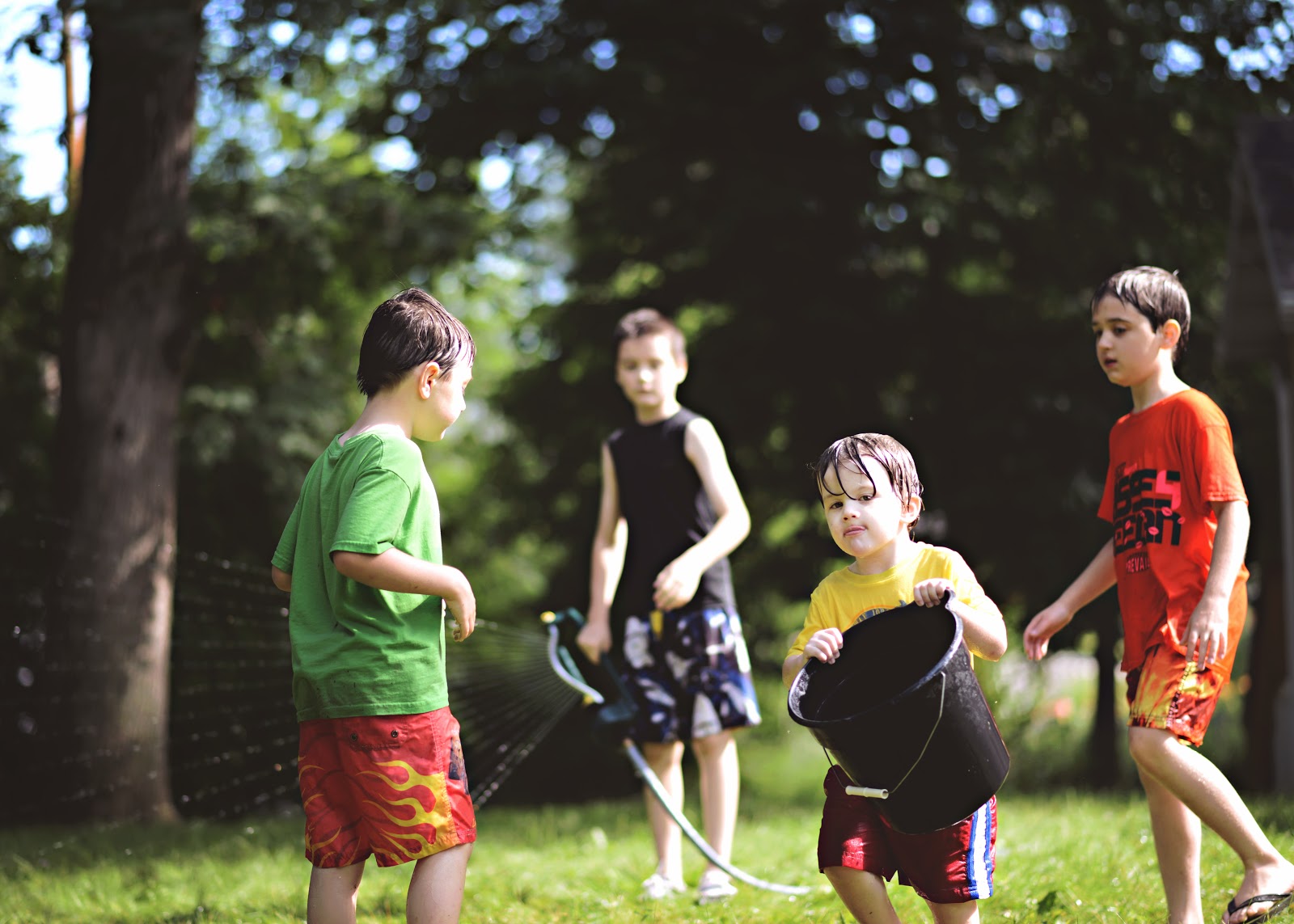 I saw the look in his eyes.  Mean.  Ready.  Determined to get back at his brothers for what they had done. 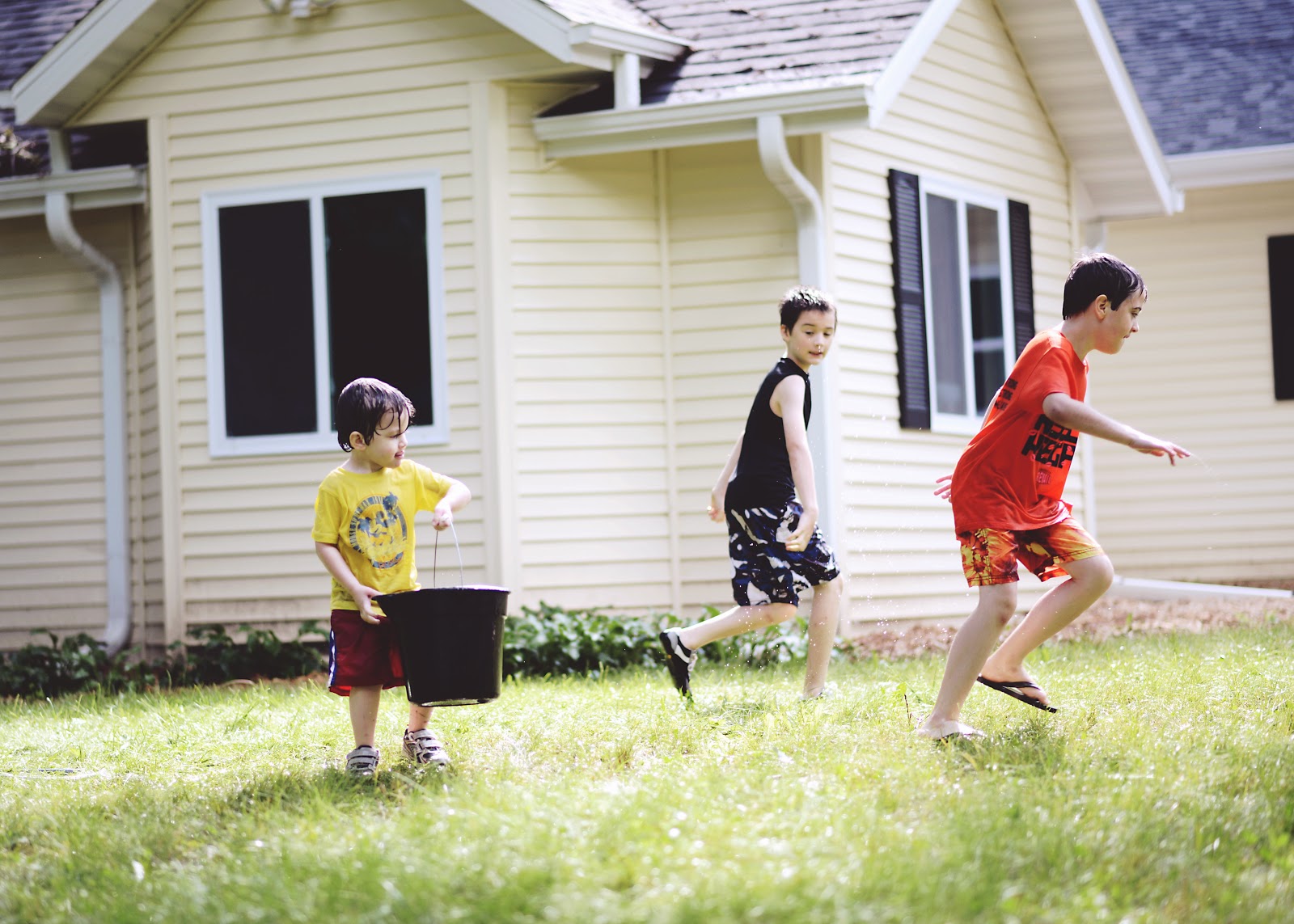 He brought the bucket over.  He decided only a few "drip, drip, drips" would be necessary.  Then it was onto the "splash".  He chose Nicholas as his victim.... and dumped the bucket... 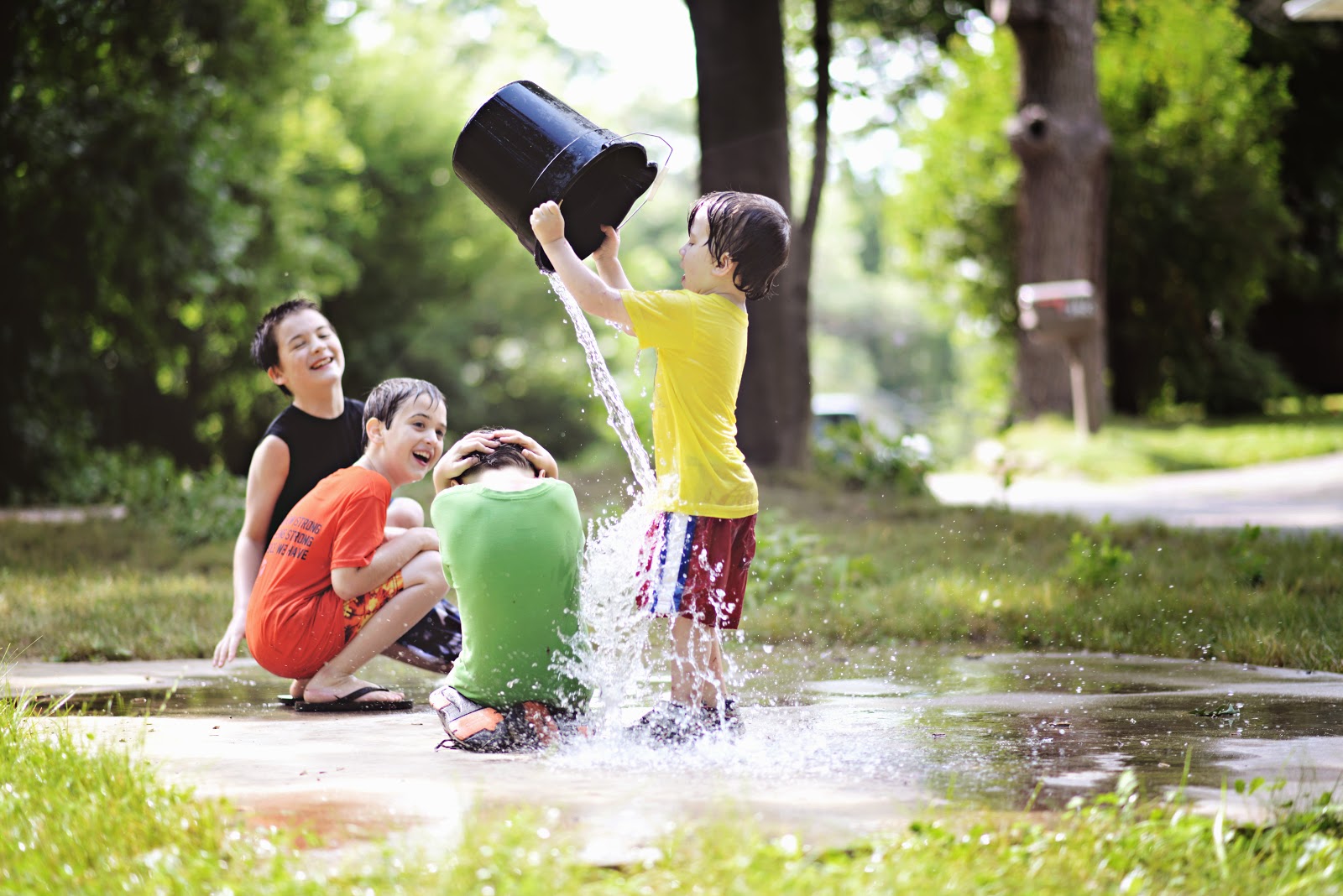 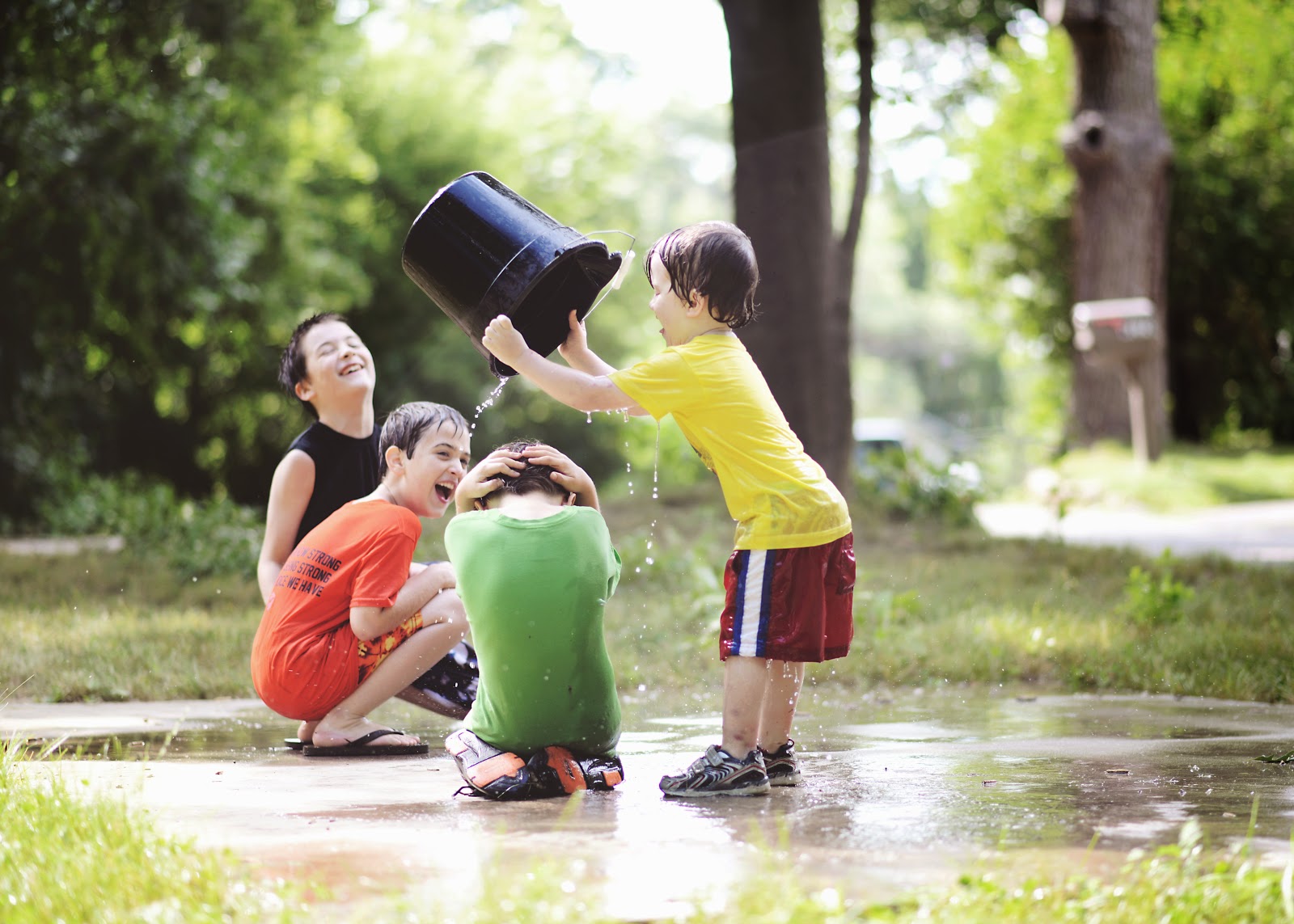 He missed his target and the water landed on himself.  But he was proud.  He laughed and pointed.  It was wonderful.  I especially loved when Quentin leaned over Nicholas with the bucket and put the last few drops on him.  So awesome.

That is truly what it's all about.  Fun.  These kids had a blast playing a game that they created themselves.  I'm glad I was able to get them outside and they could make memories and laugh together.

Well, at least until Jeremiah got "splashed".  Then it ended like this. 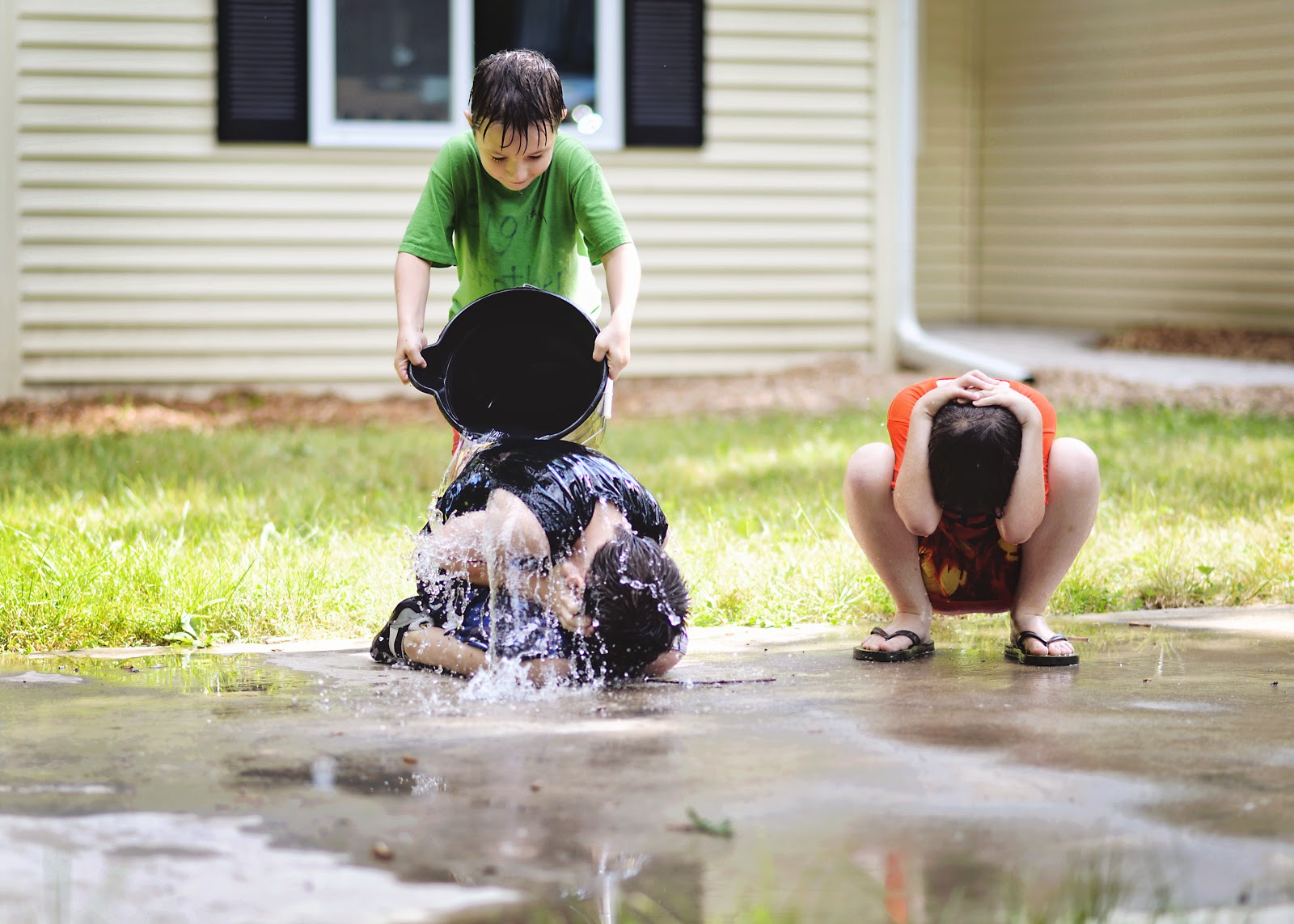 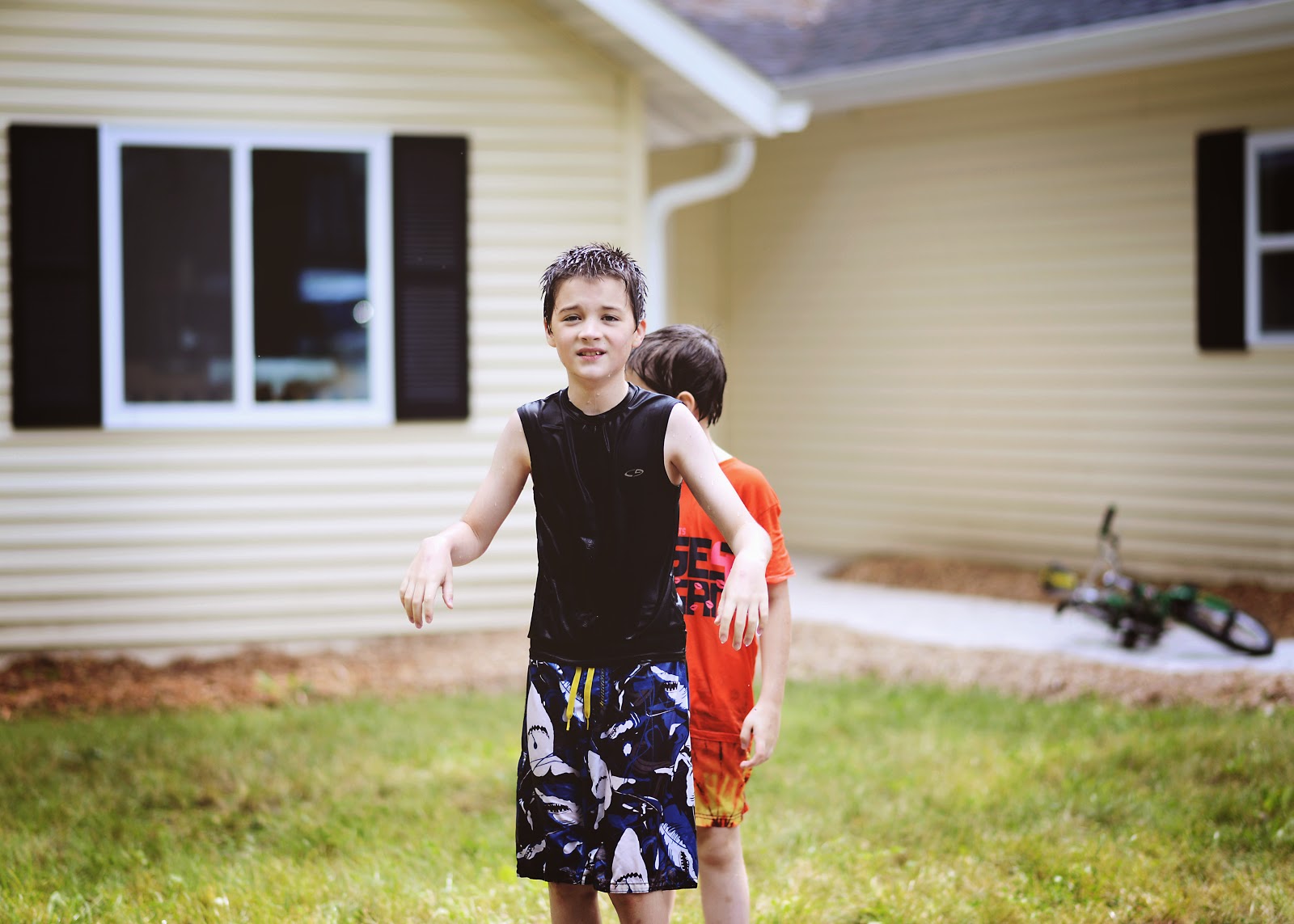 Haha, just kidding.  He was playing up for the camera!