Last year, close to this time, I wrote a blog called 'This is How it Really Goes".  It was about how difficult of a time I have taking photos of my own children.  Today, I attempted another Christmas card photo and I really don't think much has changed.  So I'm again sharing a collection of outtakes which I've entitled, 'My Dream Team'!

I wasn't going to do Christmas photos this year.  I knew I needed to shop for clothes for my boys.  My daughter had been in a cast from recent surgery and time was just running out.  Then I changed my mind and figured that even if I didn't send out cards, I should at least have a Christmas photo for us all to look back on.

My vision for this year rotated around my daughter's dress.  I purchased the dress a couple months prior but it was the cutest little dress.  I knew her Daddy would love it and I could easily coordinate clothing for her big brothers.  Whites, blacks and greys.  Simple.  I thought about all of the back drops I have and decided that I wanted to use this red back drop with white polka dots.  I thought everyone would stand out nicely.  Yea, it kinda worked.

This was my first shot.

I don't even know what to say.  I think my son, Jeremiah, all the way to the right there, thinks that if he looks sad enough I won't make him partake in family photos.  And perhaps he's wondering why I'm making him barely help hold the sign.  Hey, they all stand out nicely though, don't they? 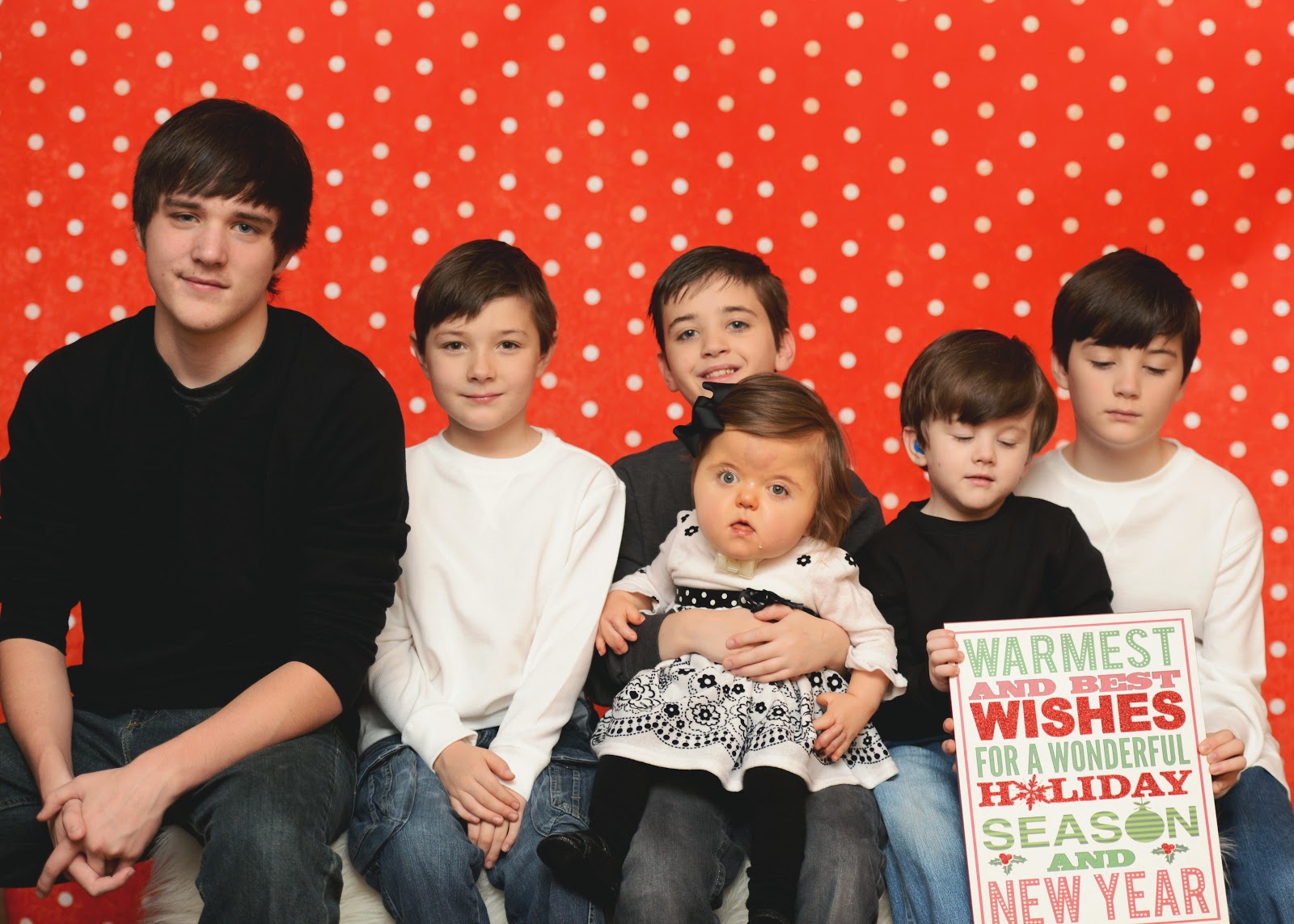 Then came this one.

Mallory wanted no part in this.  None.  And I could hear her swearing at me... "Damn it, Mom, why do you constantly feel the need to put bows in my hair!".  Quentin (the little dude holding the sign), looks like I feel.  Like that sign should say, "Merry Christmas ya' filthy animal... and a Happy New Year!". 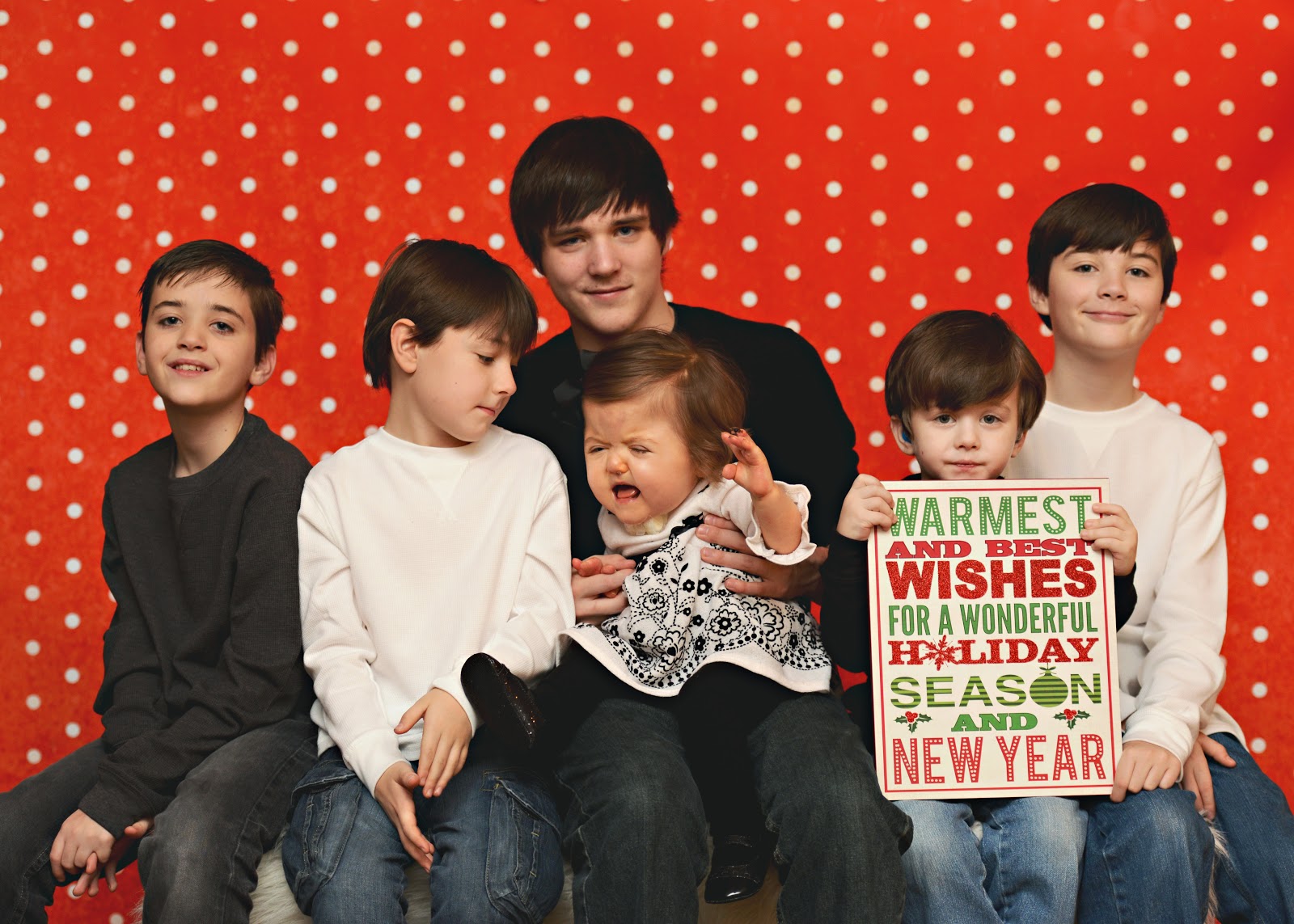 With six kids, you're bound to have blinkers in photos.  They most definitely always come in twos.  Like Noah's animals. 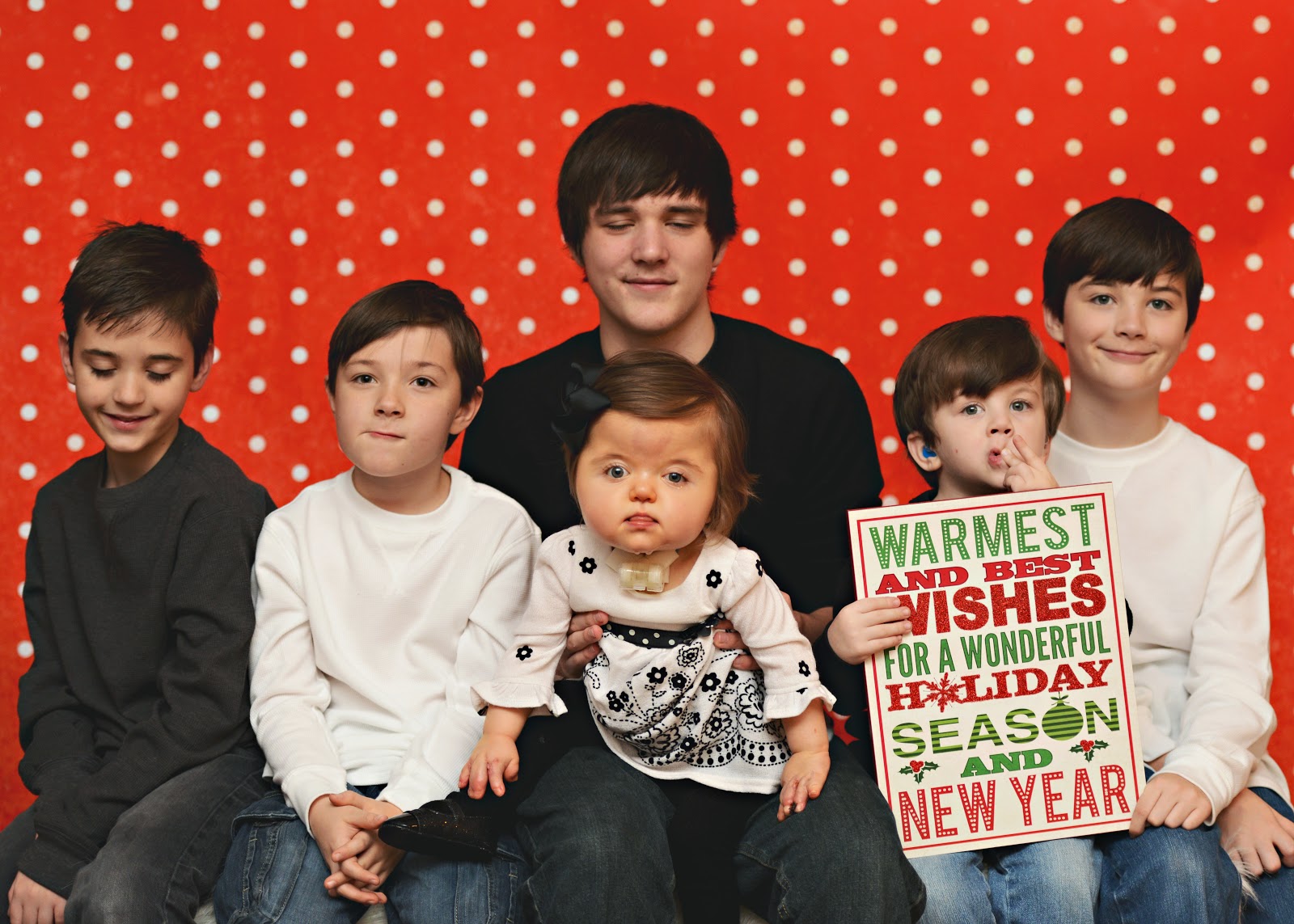 Then I get spoiled with one I might actually be able to use!!!! (I can't kid myself though, I still had to swap a head.) 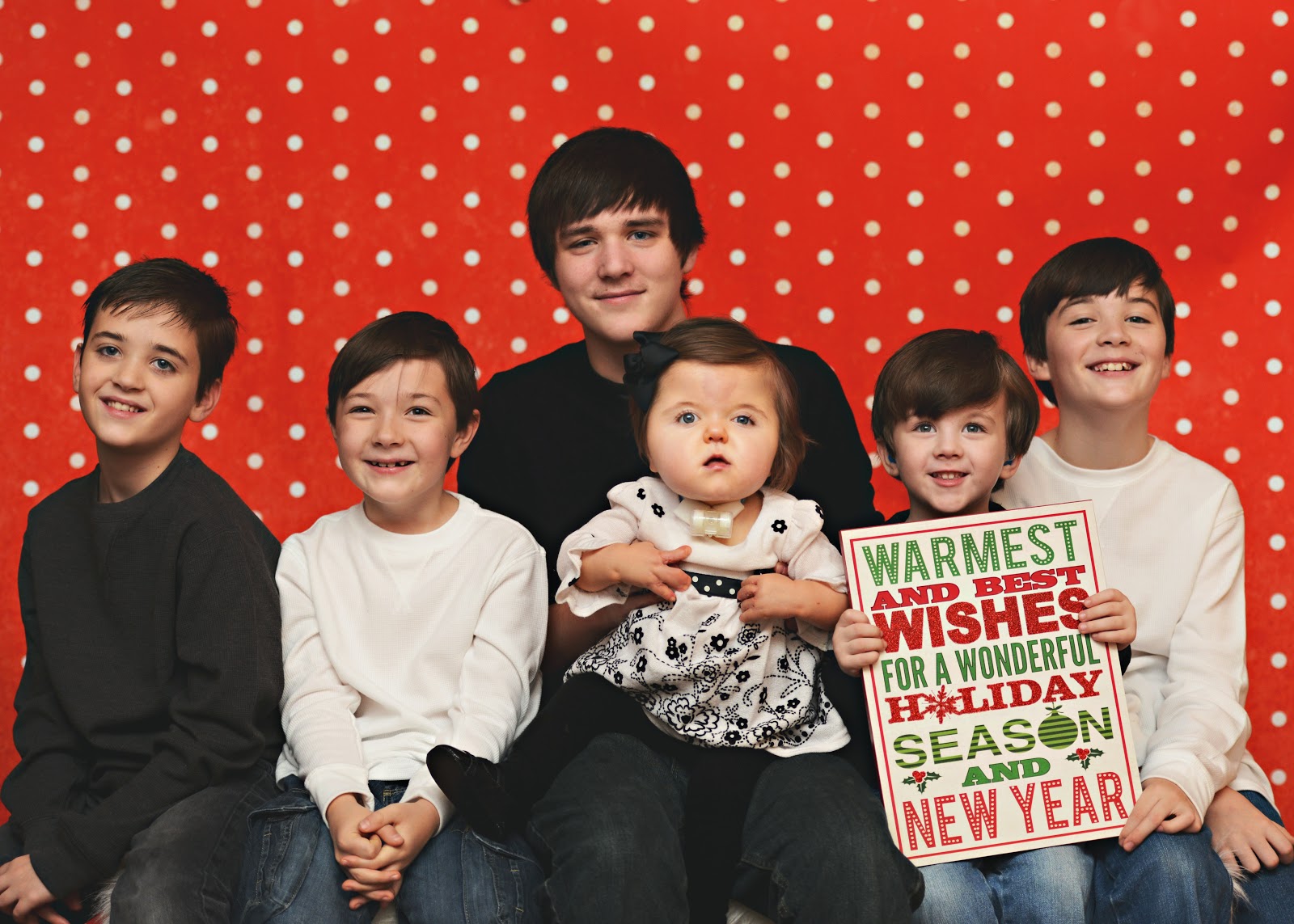 Then, Jeremiah made this weird face. 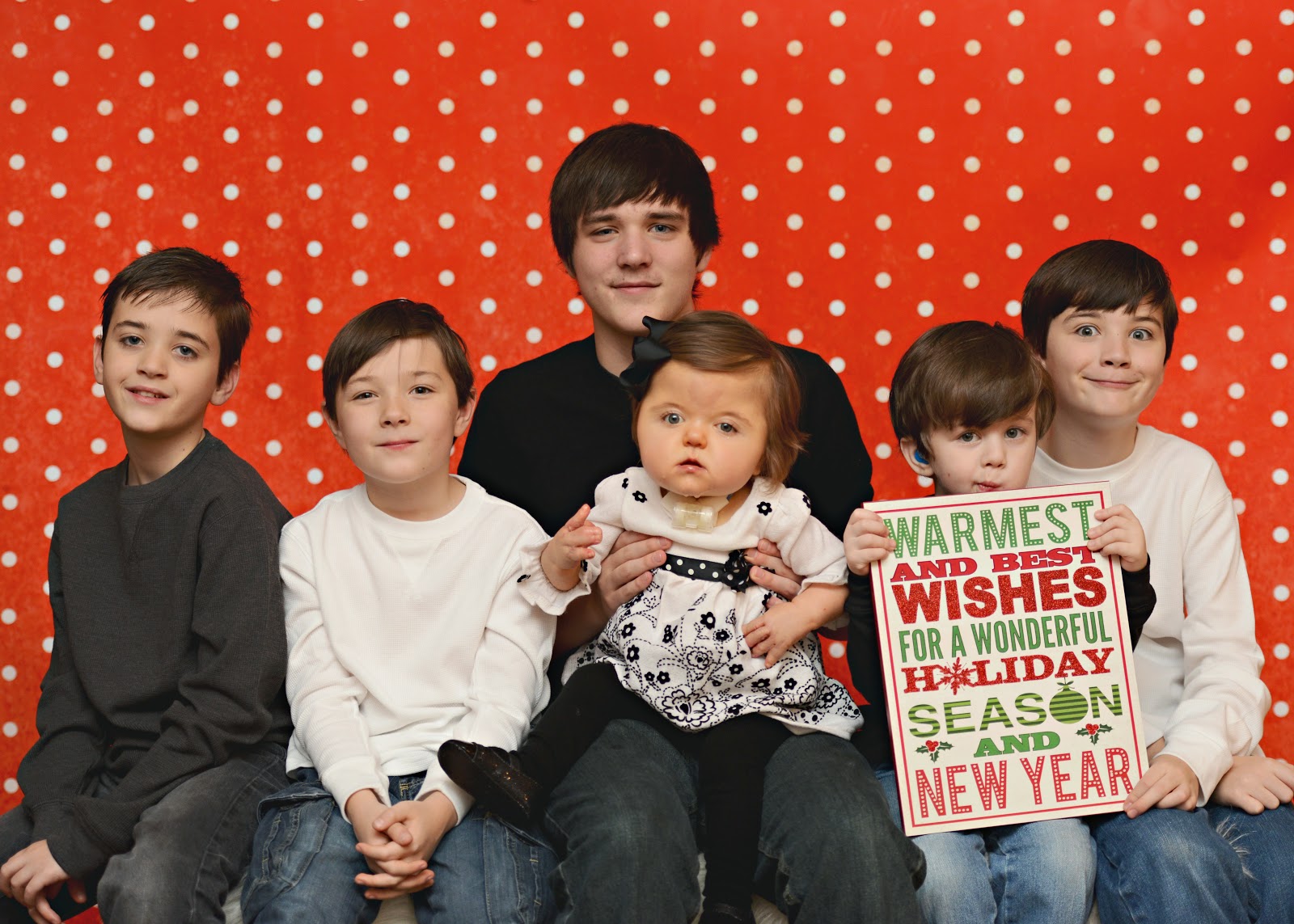 And Quentin did that. 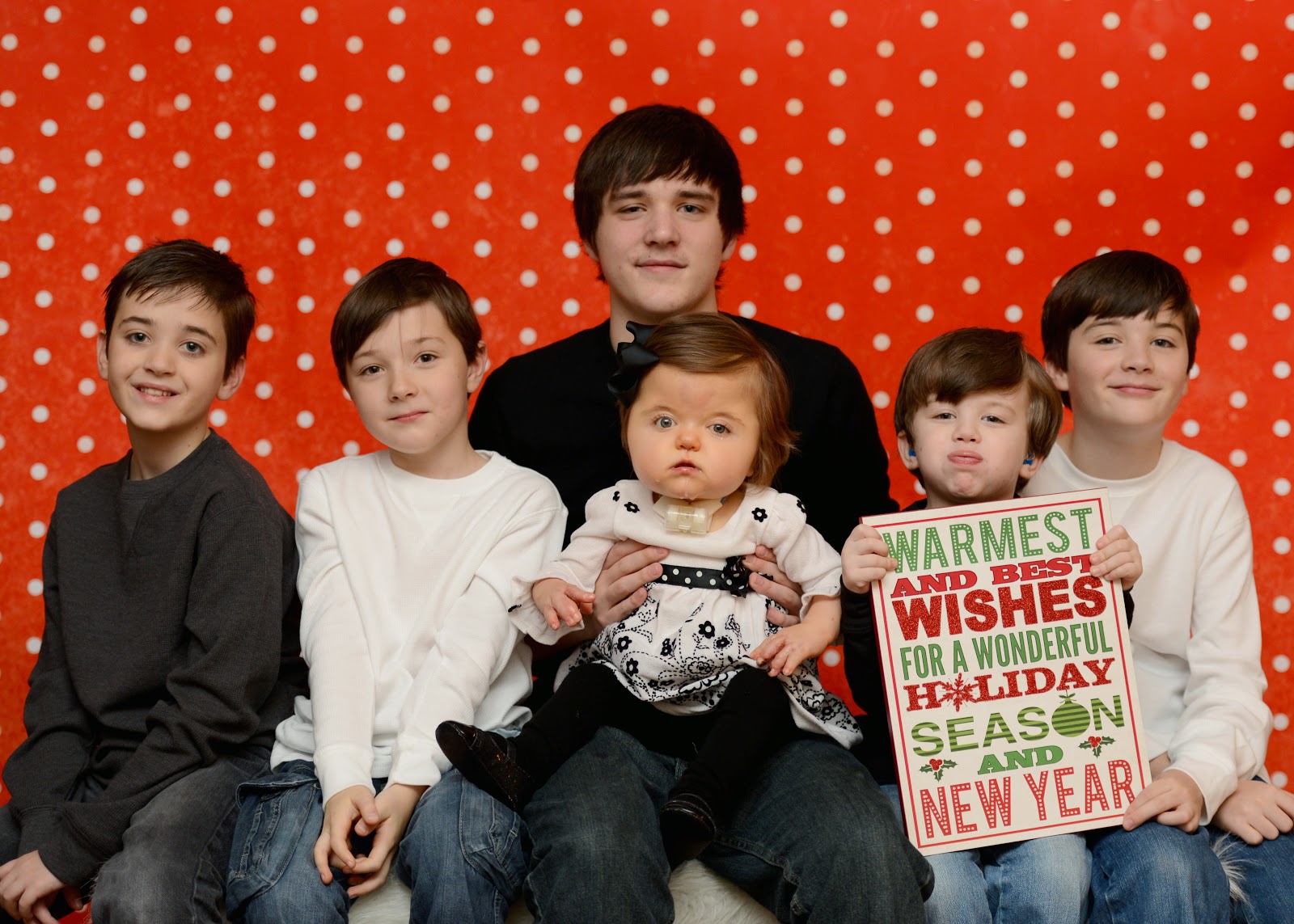 Then Nicholas.  He was the star of my last Christmas photo blog.  I wonder why? 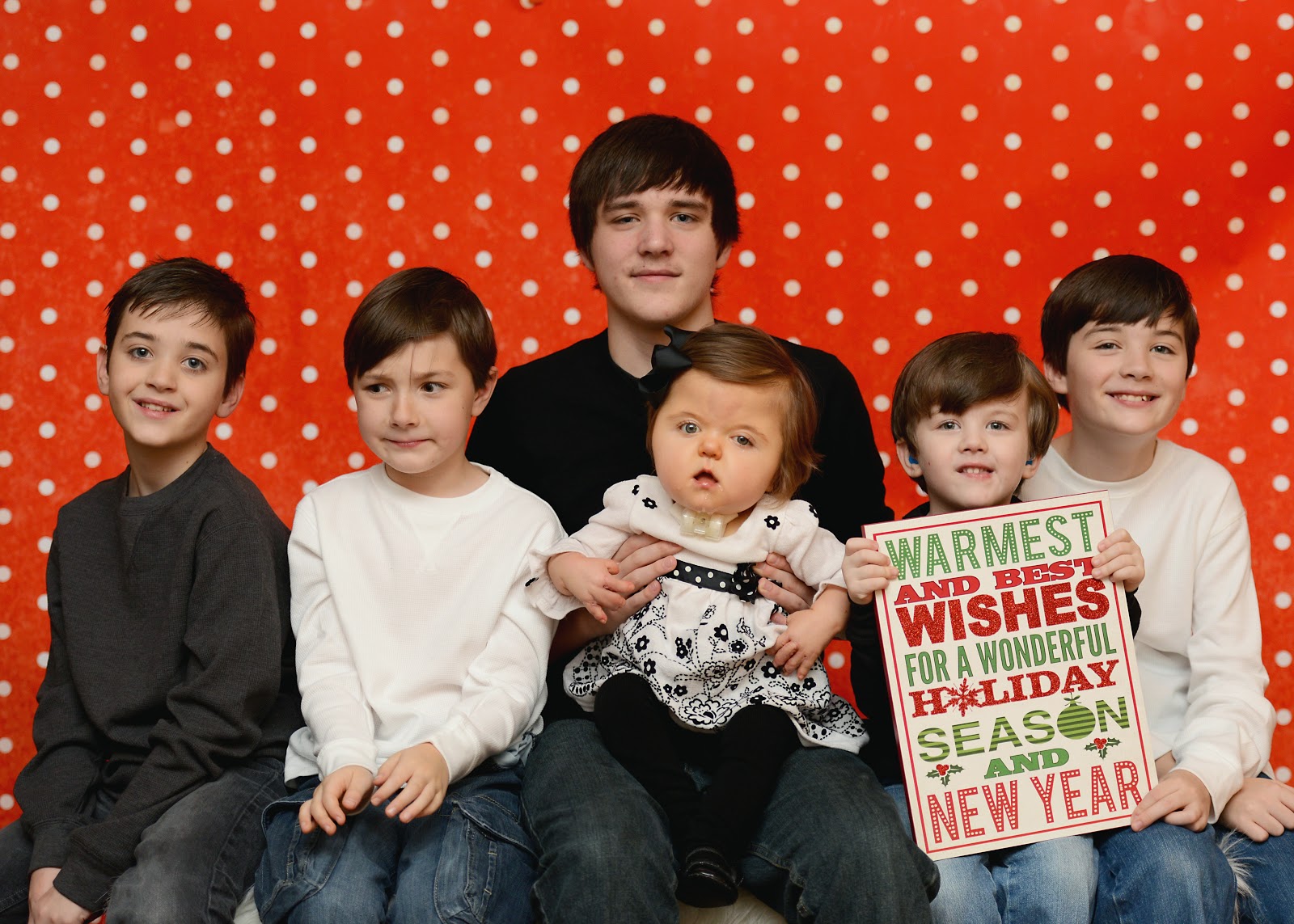 I think they're all out to get me.  Aside from maybe Andrew (all the way to the left) and Tyler (holding Mallory).  What the hell, Jeremiah?  I swear I didn't give him any drugs. 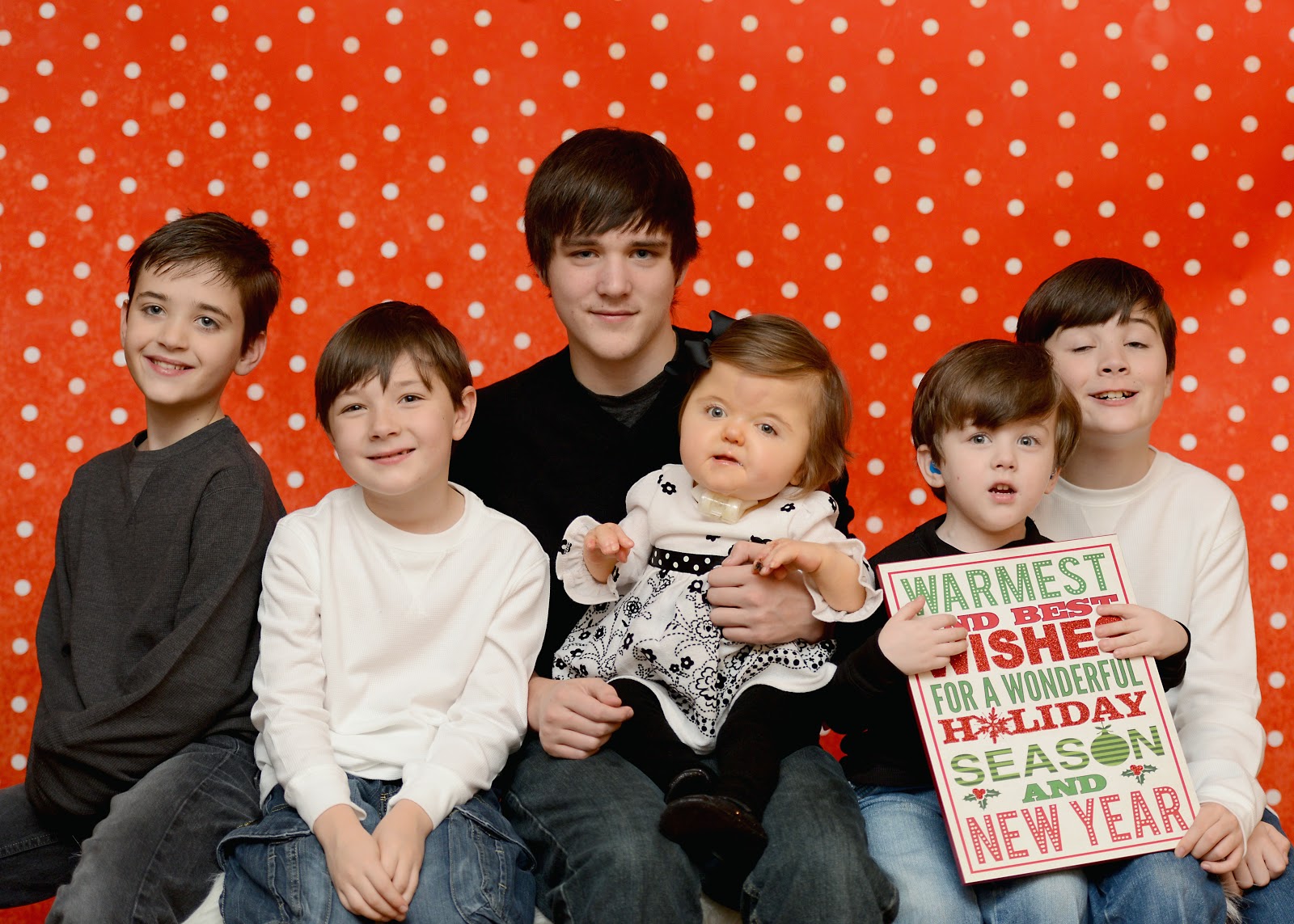 Okay, so this next photo I think speaks to me the most.  I mean, it really tells a story.  I don't think I've come across a photo that said so much in fact.  Have you?  I mean, the look on Mallory's face says everything.  I think she's saying, "Mom, if you don't put that damn camera down right now, I'm gonna shove it where the sun don't shine!".  Yep, good times.  Good times. 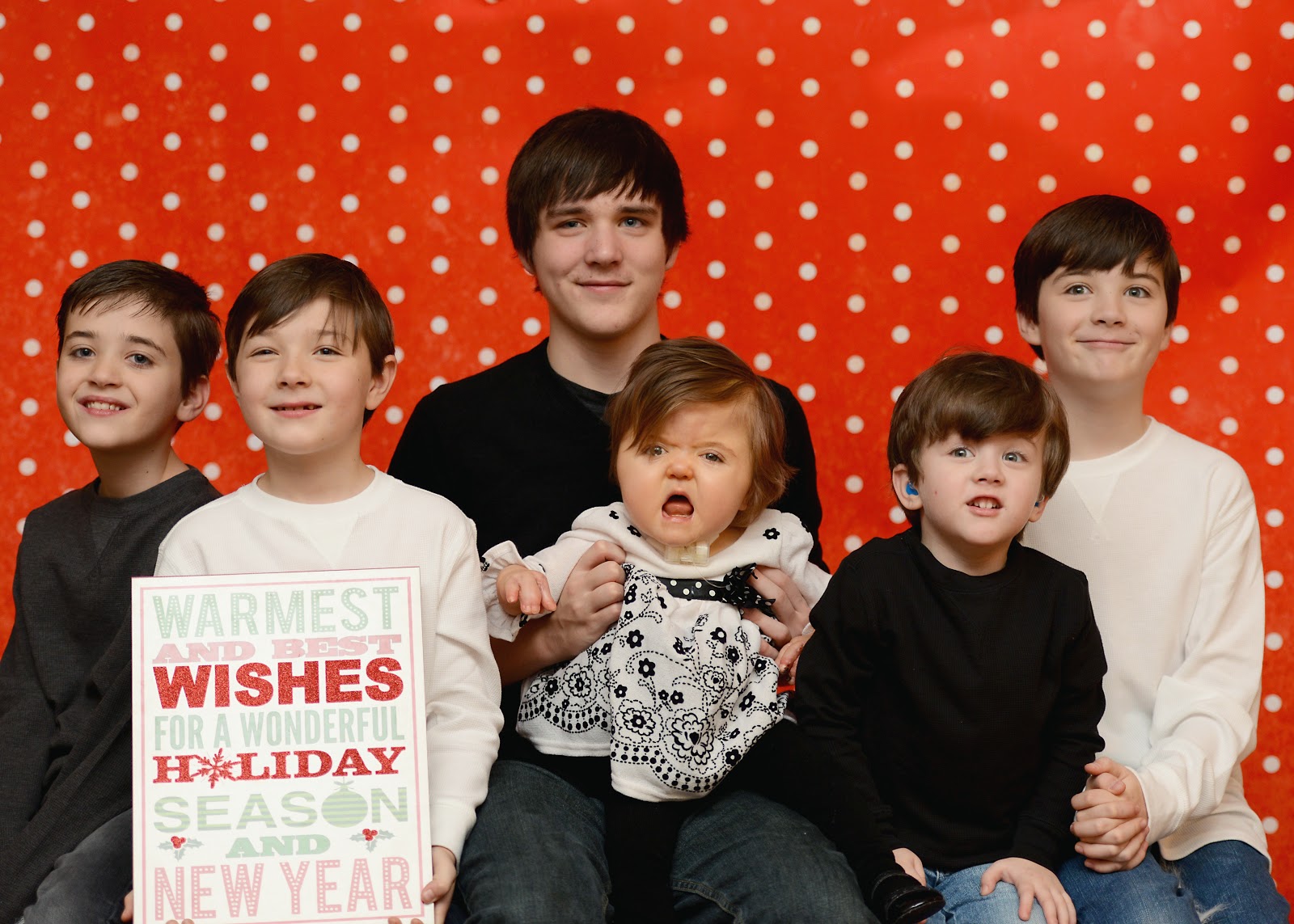 I didn't put the camera down as the diva requested.  So she treats me like the friggin' paparazzi and puts her hands up.  Nick gives everyone the warmest wishes for a wonderful holiday season and New Year though. 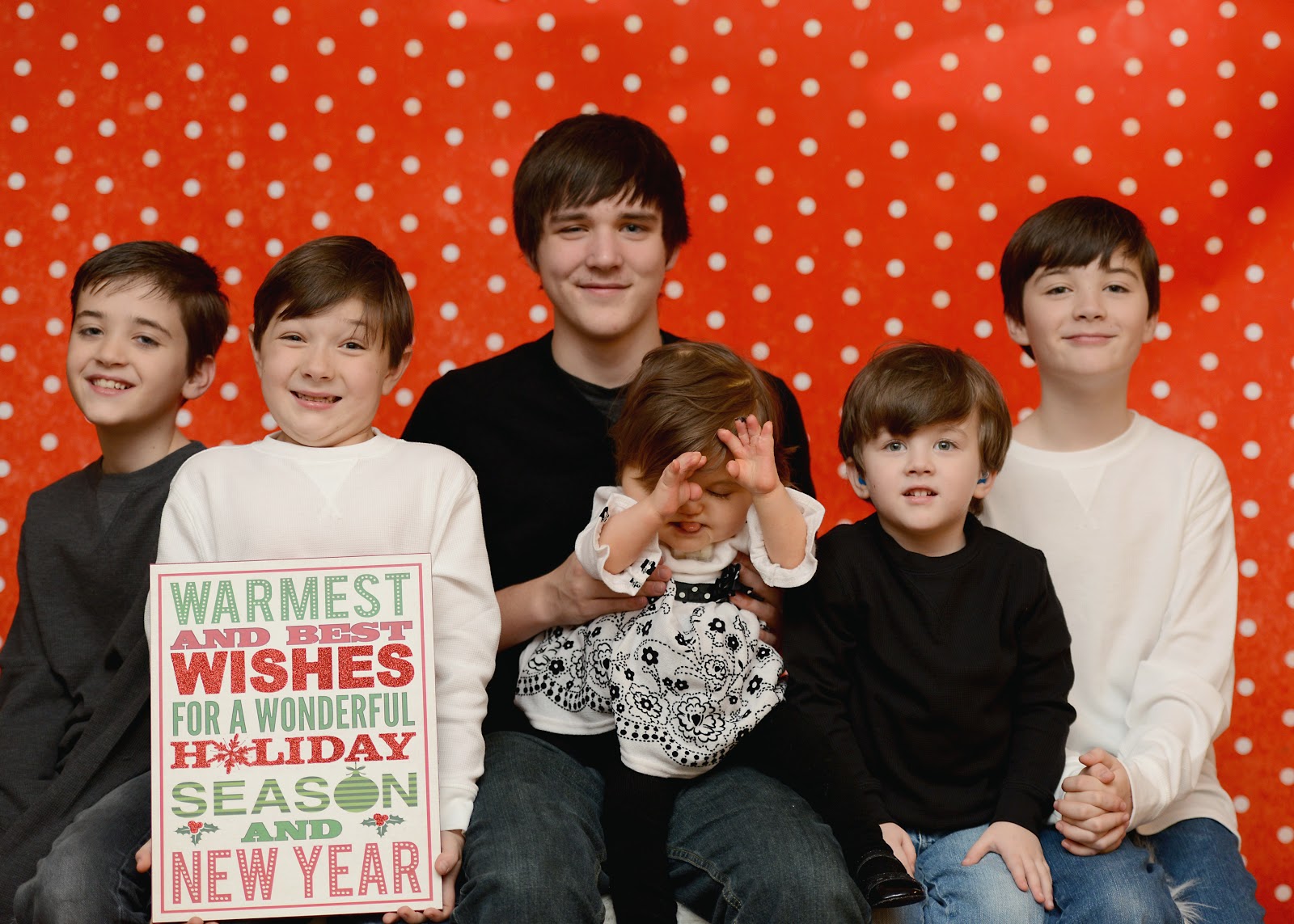 This next one is... o.. k.. but Mallory seems to be telling me I'd better hurry before she covers her face again. 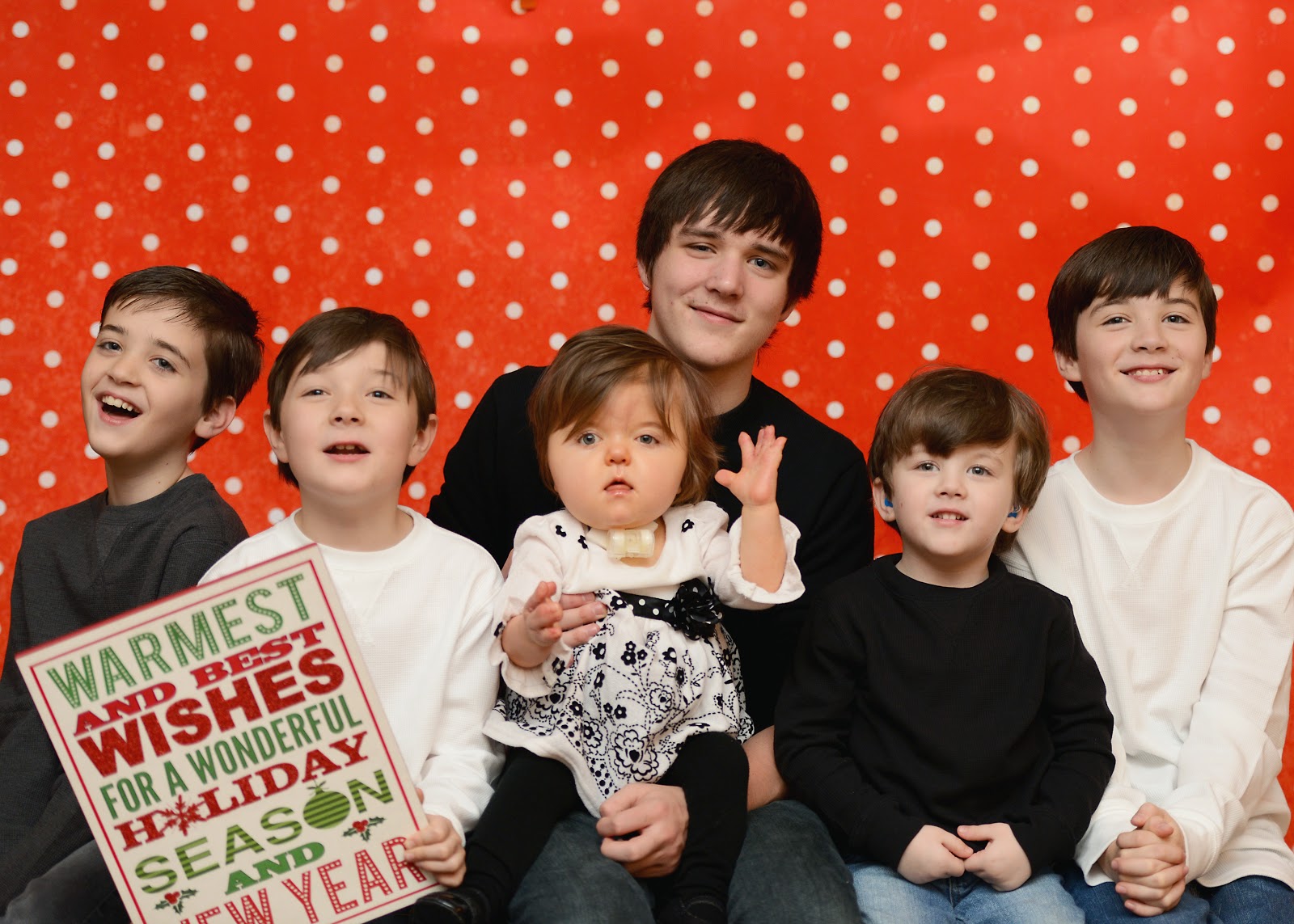 After that, focusing on the children stopped being important.  The sign became the center piece.  Don't the all look so happy about it? 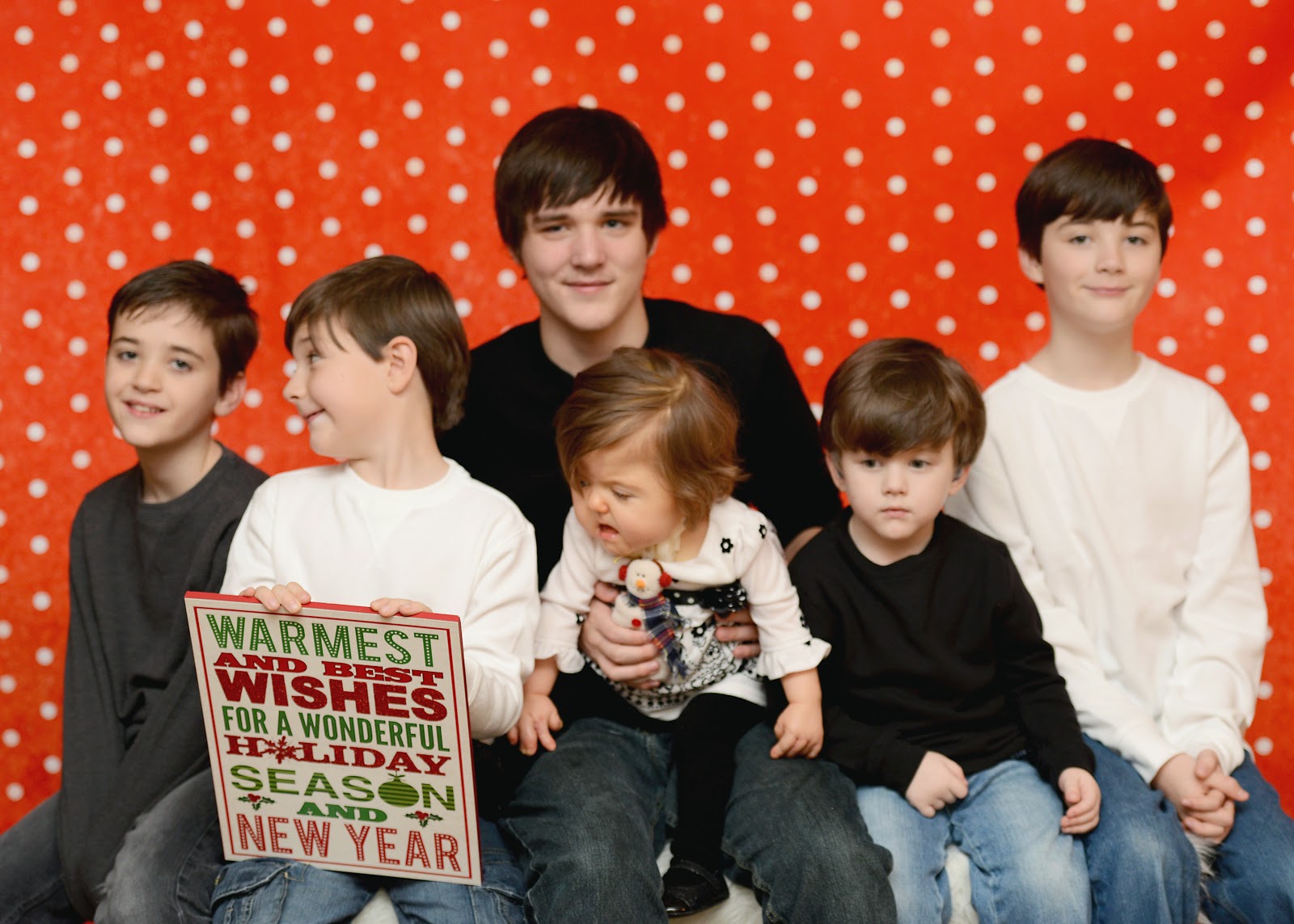 After that I was done.  I felt frustrated because I didn't get the photos I had hoped for.  Once again, my vision was greater than reality.  AND it was dinner time.  My husband saw my distress and suggested that we sit down for dinner and then give it another shot.  I had already cleaned up everything and wasn't too keen on setting up another shoot, but during dinner I had a new vision.  A new backdrop.  A new idea.  The kids would pretty much do the same thing... but they'd be doing it on a much cooler vision. 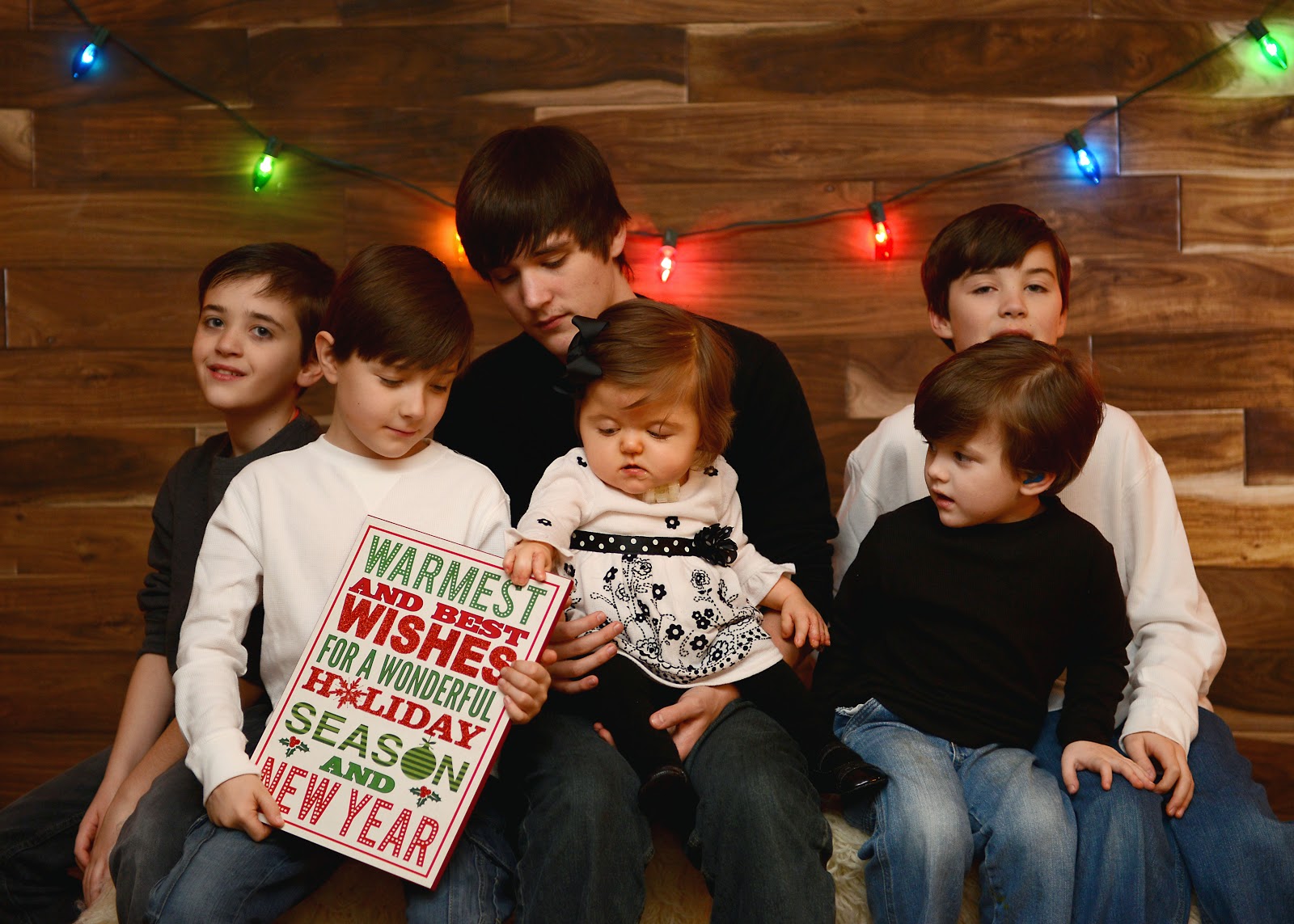 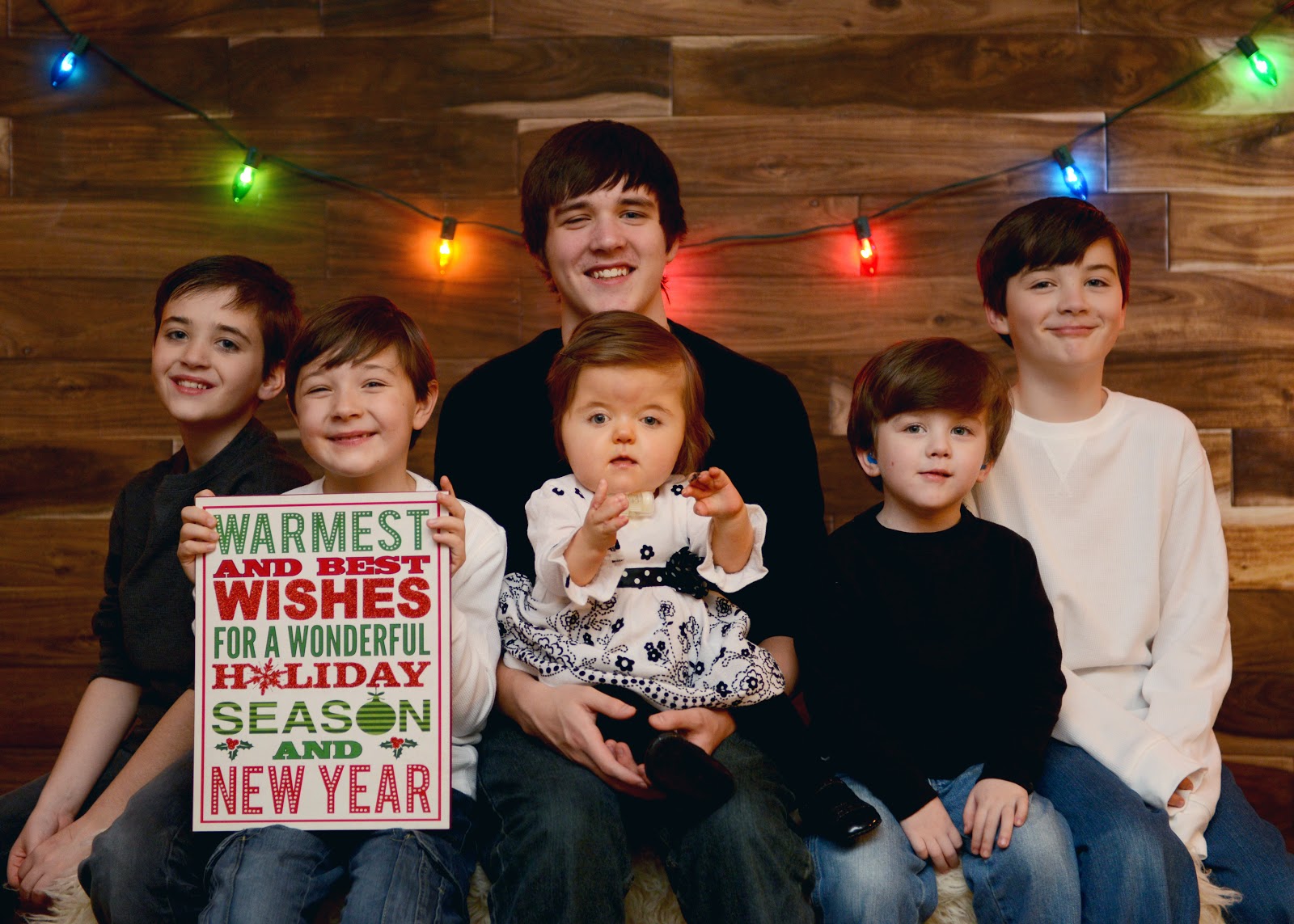 But then Nicholas forgot he was assigned to hold the sign.  Brought the photo down a bit. 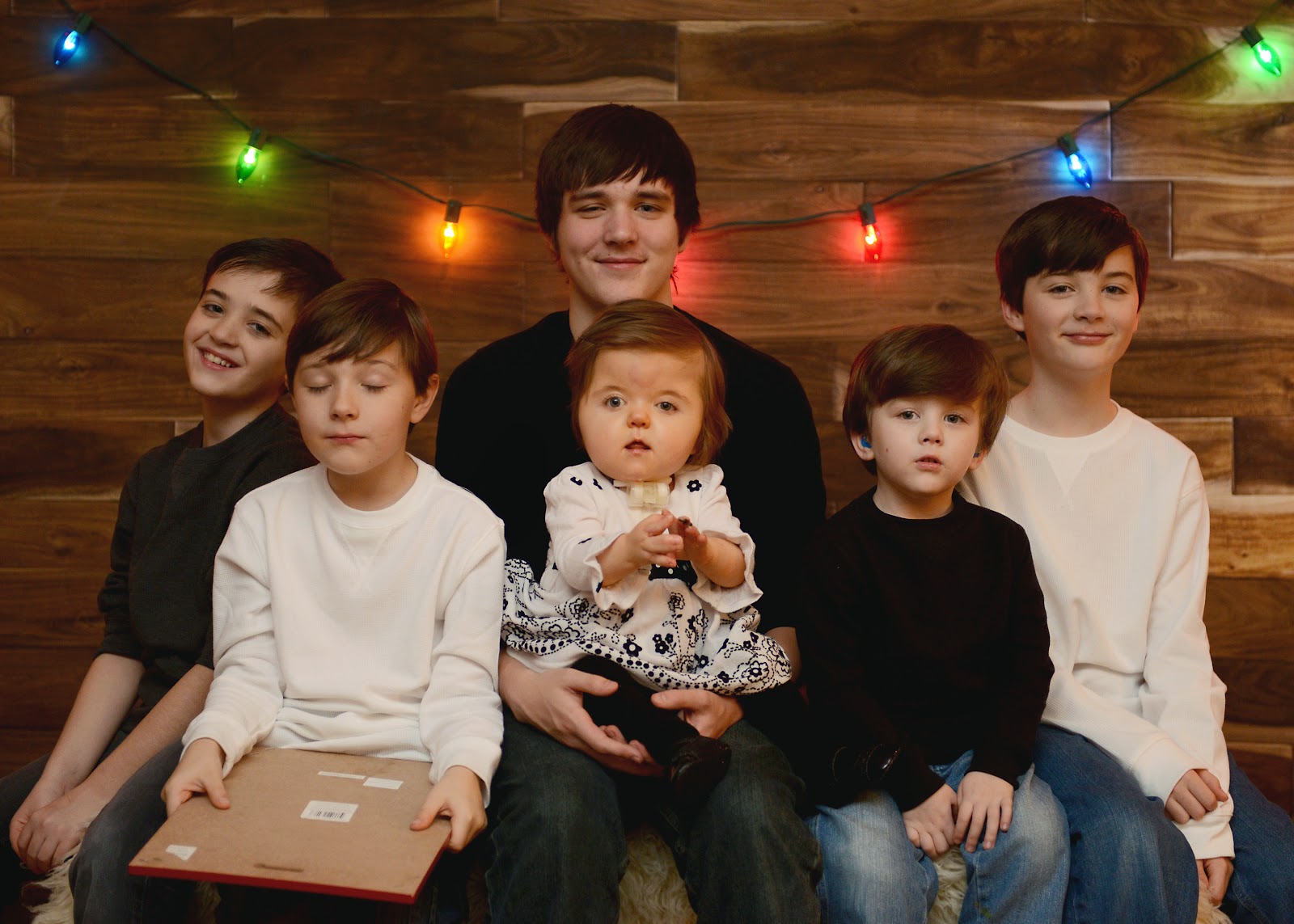 Then he seemed to want to sing a song.  Which would have been cool if it was a Christmas carol.  "It's going down, I'm yelling Timber" wasn't really appropriate.  (Totally kidding... fill in any song you like.) 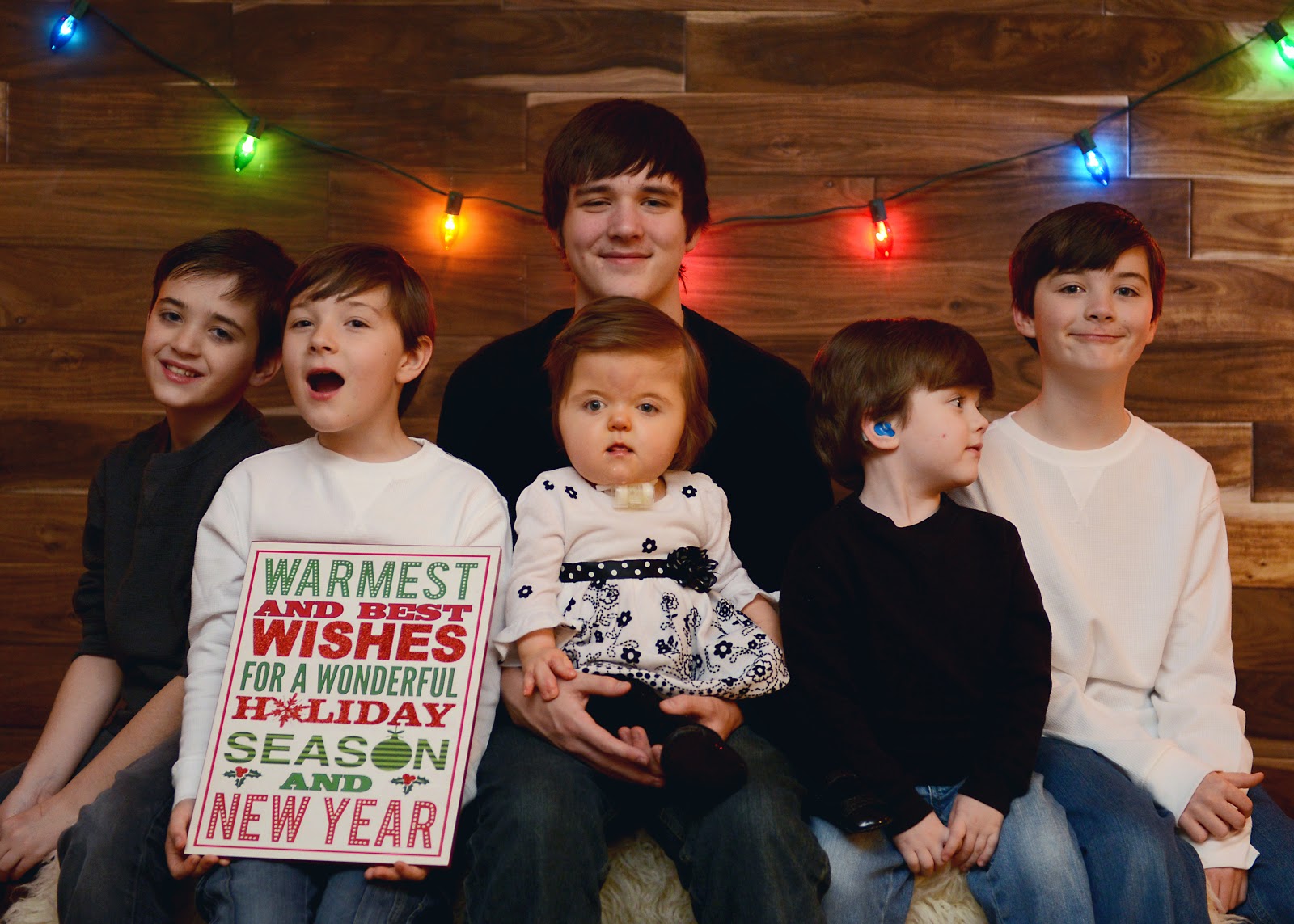 Pssshhhhh... fill in any song you like, but then Andrew will give you those weird eyes. 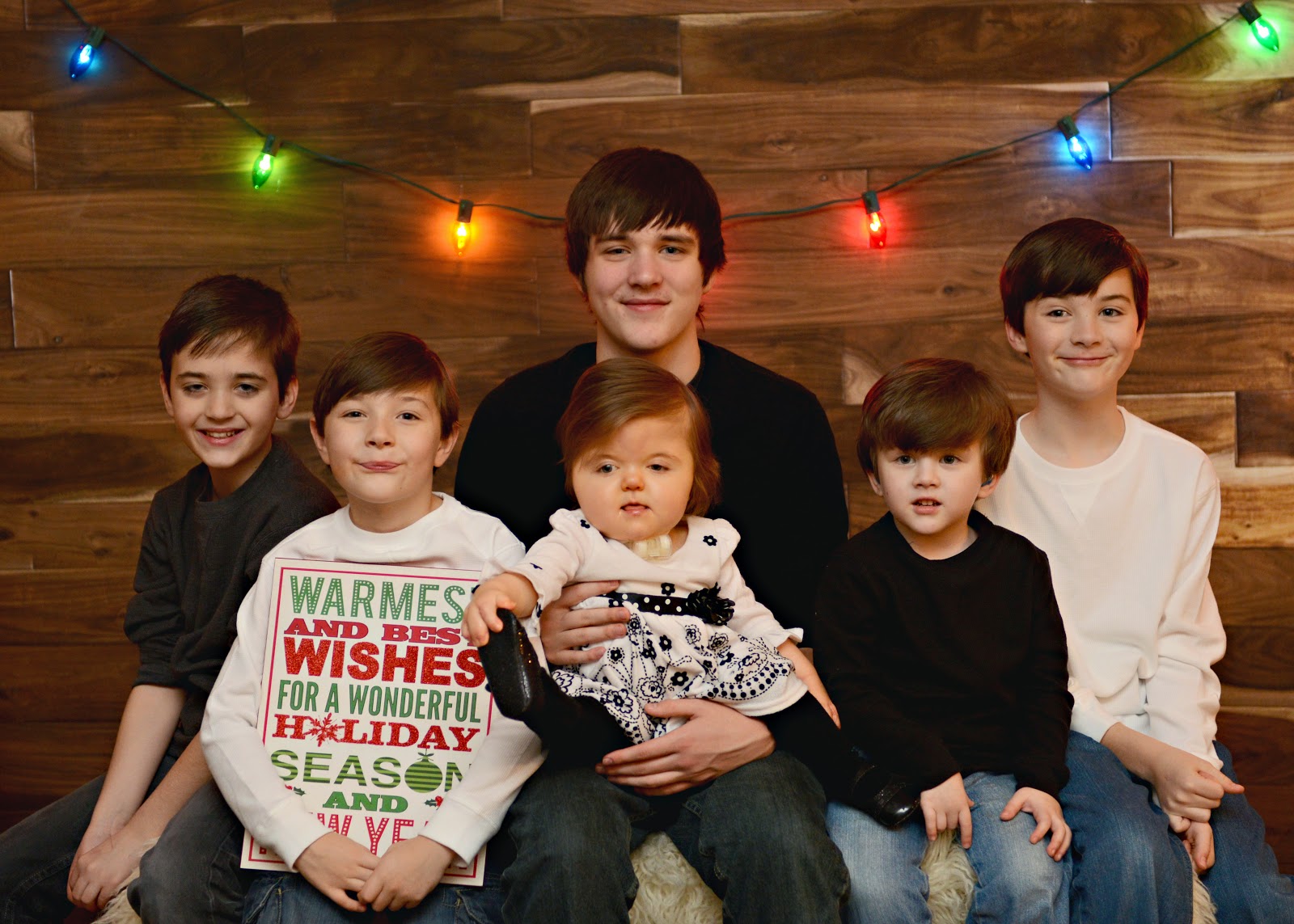 This was my favorite.  The nose pick.  Right up in there, Quentin, good job.  Nick looks very uncomfortable with this.... 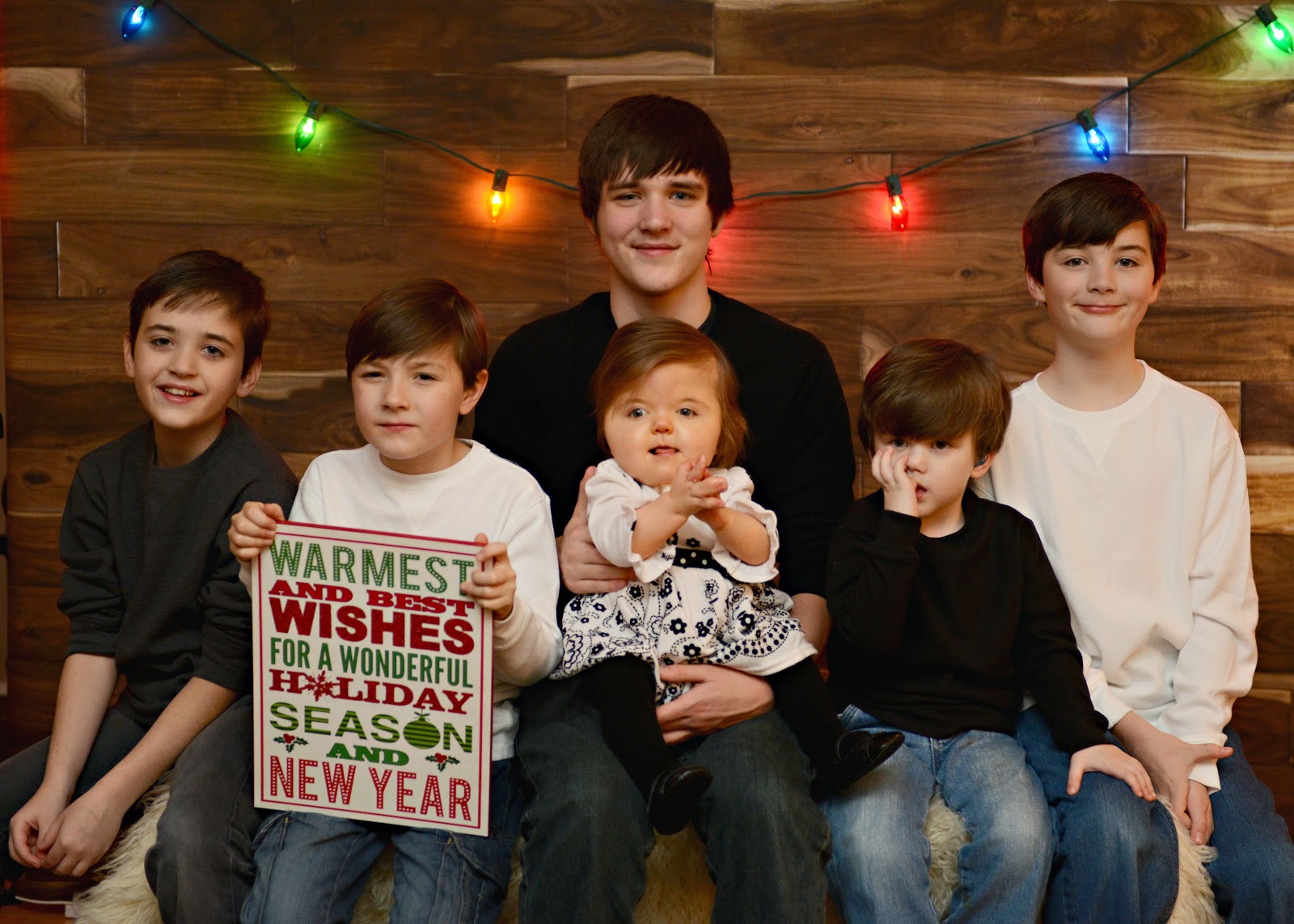 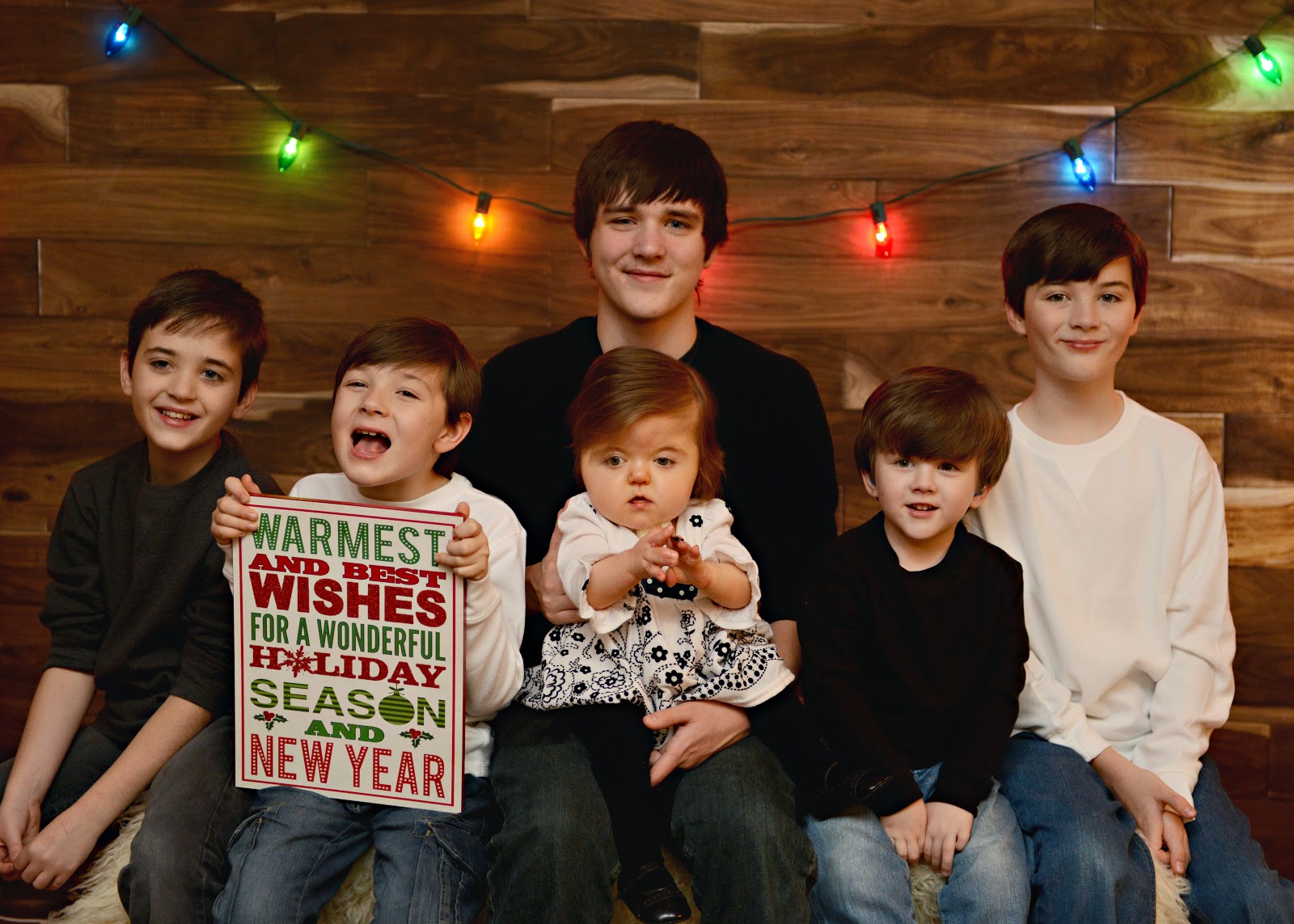 I did manage to get a photo I liked a lot though.  Of course, it did entail a head swap.  I won't tell you which one. 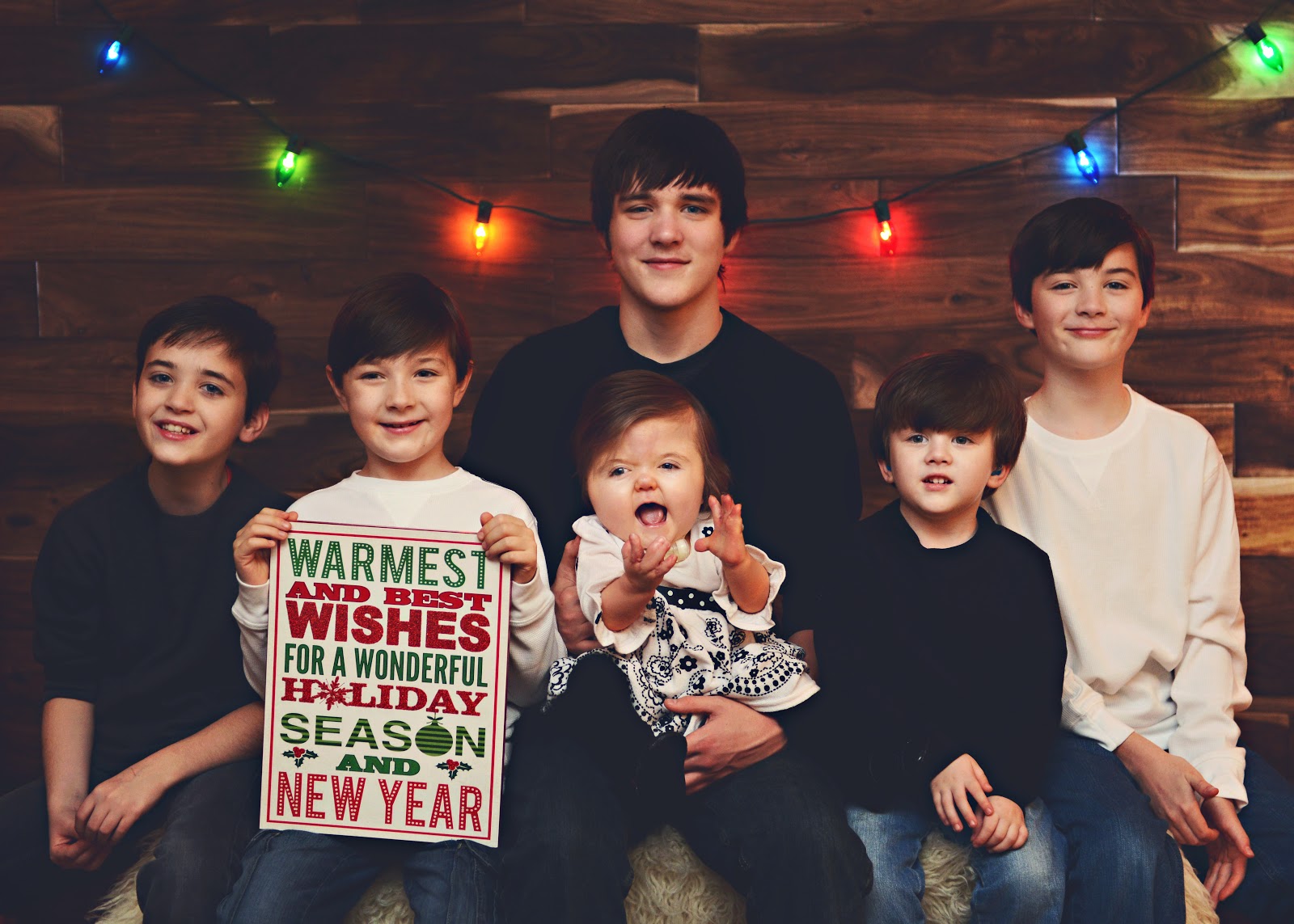 Moral of the story?  It's never easy to get photos of kids!  They are spontaneous.  They are unpredictable!  That's what makes it fun though!  The outtakes are sometimes better than that perfect photo!
Posted by Cathy at 11:03 PM No comments:

It seems like every time I turn around I see another photo of a naked or partially naked Kardashian.  They are everywhere.  Their voices.  Their drama.  Their marriages.  Their divorces.  And of course, their nakedness.

I mean, to each their own.  If you want to pose nude, by all means, pose nude.  If you want the world to see it, that's fine I suppose if you're all good with it.  But let's not call it what it isn't.  Kim Kardashian's nude "break the internet" photos didn't shout "empowering, strong woman" to me.  It shouted "desperate for attention".  It just didn't look classy or cool.  Not at all.

Yet the world eats this stuff up.  Then, Kourtney had to pose nude too.  Baby belly and all.  Most of the photos where... o...k... ish..... but the one with blurred out nipples?  Now, that is one classy photo.  One I'd definitely order a full size canvas of to hang on the wall.

C'mon.  Is this what we should allow women to represent?  Mothers?  Wives?  Don't get me wrong, I appreciate sexuality and feeling sexy as a woman, as a wife and as a mother, but I also appreciate being a good role model.  I appreciate and take seriously my role as a Mom to my six children.  I appreciate what Moms do every single day, working or stay at home, single or married. We juggle a lot.  Every day.  A Mother's job is not an easy one.

We don't all have the good fortune to have nannies or chauffeurs.  We aren't all lucky enough to have make up artists come to our houses to make us look awesome in the mornings or personal shoppers to keep us up to date with all of the latest trends.  Most of us Moms... in the real world... are lucky to get a shower in every couple days.  Are lucky to eat 3 meals a day.  Heck, lucky if they eat 2 meals a day.  Are lucky if we can buy ourselves a new shirt every 6 months or wear anything other than yoga pants through out a normal week.  I know I just don't have the time on most days to make myself look like a thousand bucks.  I'm lucky if I look like a buck fifty.

Life is hectic day in and day out.  For me in particular, I juggle six kids, two children with special needs, doctors appointments, homework, meal planning, laundry, cleaning, fighting boys, toys all over the place, dishes, chores, sleep, naps, diapers, basketball practice, school plays, potty training, parent teacher conferences, tech support (for all the friggin' gadgets around here), a traveling husband, bills and so on and so on and so on.  And I don't need an award for it.  Or special recognition.  It's my job as a parent.  As my children's mother.  I know there are many out there just like me and I don't want to see Kim Kardashian's butt in my face, balancing a wine glass like that's some sort of great accomplishment in her life.  She should be using her status to lift up women as wives and mothers.  Not her ass to lift up her wine glass.

So, since she didn't do it, I decided to give it a go.  It's no magazine worthy photo.  There's no wine glass balancing on my rear end (although there could be one off to the side waiting until the kids go to bed!).  I didn't photoshop my body to look like something it isn't.  It's just me.  With my kids.  My every day life.  My oldest son, my 16 year old, isn't in the photo.  Why?  Because he was the photographer but every bit as important.  We all help each other in our house.  Even by taking crazy photos for a Mom that hopes to prove a point.  Even a small point.

I have special kids.  All of them.  They have a baby sister with an appearance and health altering disorder and they have been the best big brothers a person could ask for.  They all have their own awesome personalities and quirks.  They all help to keep our home, our own little world moving.  It's crazy, but it's our crazy.  I wouldn't trade it for anything!

What should we be breaking the internet with?  Photos of all of us.  Real women.  Real people.  Doing real things.  For our husbands.  For our children.  For our families.  For our every day lives.

I have a challenge for every person that might stumble across this blog.  I challenge you to post a photo (not here.. or here if you want to...but on FB or Twitter.. whichever social media you like) that represents your life and what's most important and good.  That empowers you.  You don't even have to be a parent to participate!  There are too many good deeds in this world, too many good, every day people that go unnoticed and we should make ourselves noticed!

Post a photo and challenge others to do the same!  Let's take the world back!  Let's show everyone what real really is!  You can challenge one person or a hundred!  Let's get something worth while to trend! 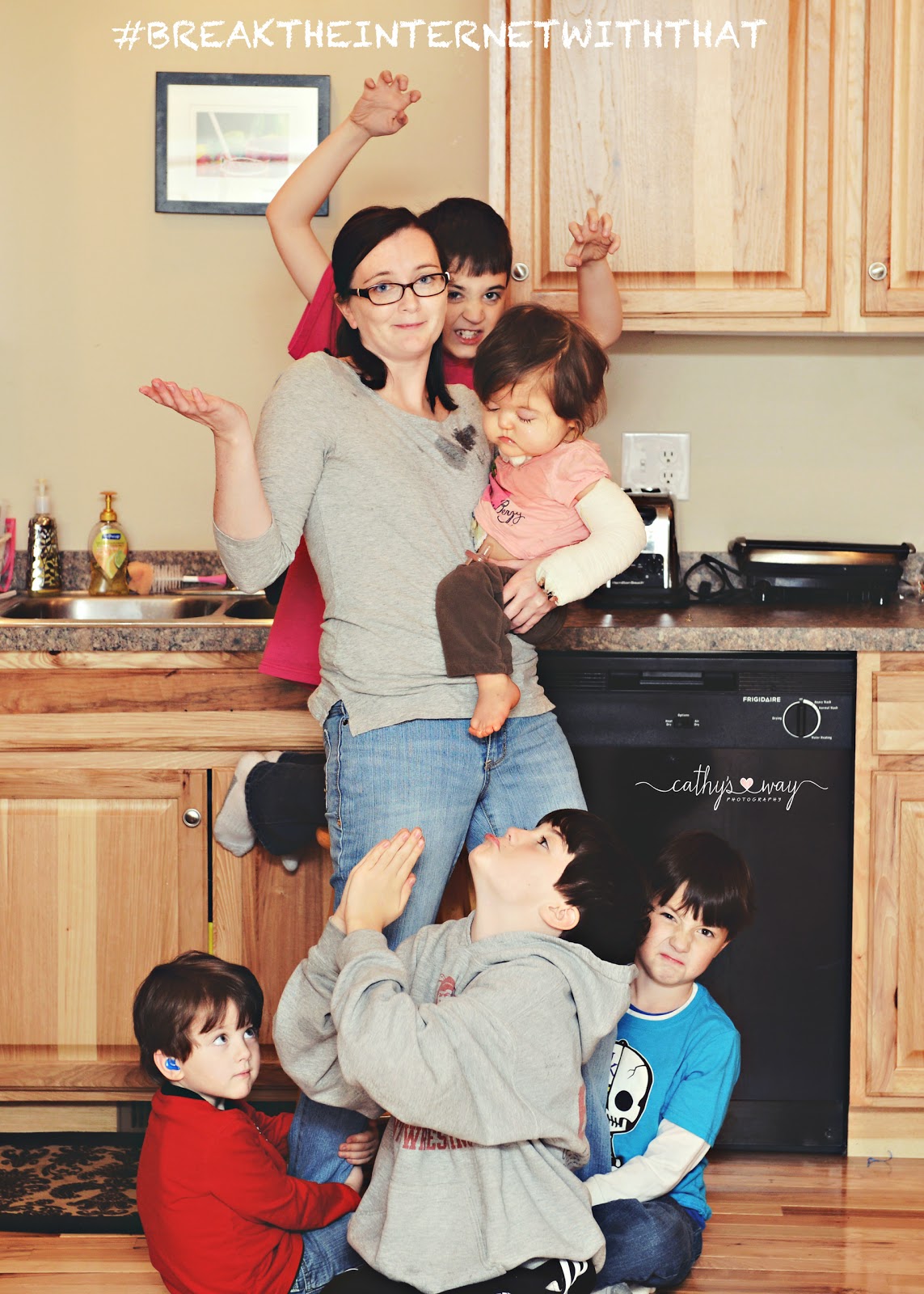