Last night, my eleven year old son, Jeremiah was assigned the daunting task of washing the night's dinner dishes.  He was doing it in replacement of his little brother, Andrew, who had thrown up right before dinner and was sent to bed early.  Jeremiah was not happy about this but I promised him that Andrew would take one of his days next week and that he could play video games today as a reward.

We have pretty high expectations in our house when it comes to the nightly dish job.  The kid assigned to wash dishes has to load the dishwasher, wash the counters, the table, the stove and the sink, sweep the floor and take out the garbage.

Jeremiah begrudgingly got through the job but was told by his dad to make sure he got ALL the garbage including some plastic bags that were put out on the screened in porch.  I'm just going to say that the bags were holding dirty diapers.  Well, one of them was but another was holding something more gross and.. well... yea... I'll leave it at that.  Diapers.  Dirty diapers in the bags.  Jeremiah forgot about the bags.

This morning I get up to Jeremiah fussing about having to write a two page essay (which was decreased to a one page essay once we realized how hard two would actually have been).  His dad explained to me that he had to write about why it was he didn't take out ALL of the garbage.

The results, in my opinion, were pretty hysterical.  I have some photos of the essay but since it may be hard to read, I'll be transcribing it for you.  I have some close ups of some of his margin notes too.

(I'll be transcribing his words in bold & italics... any of my commentary will be in regular font)

So, here is the top of the first side of the page. 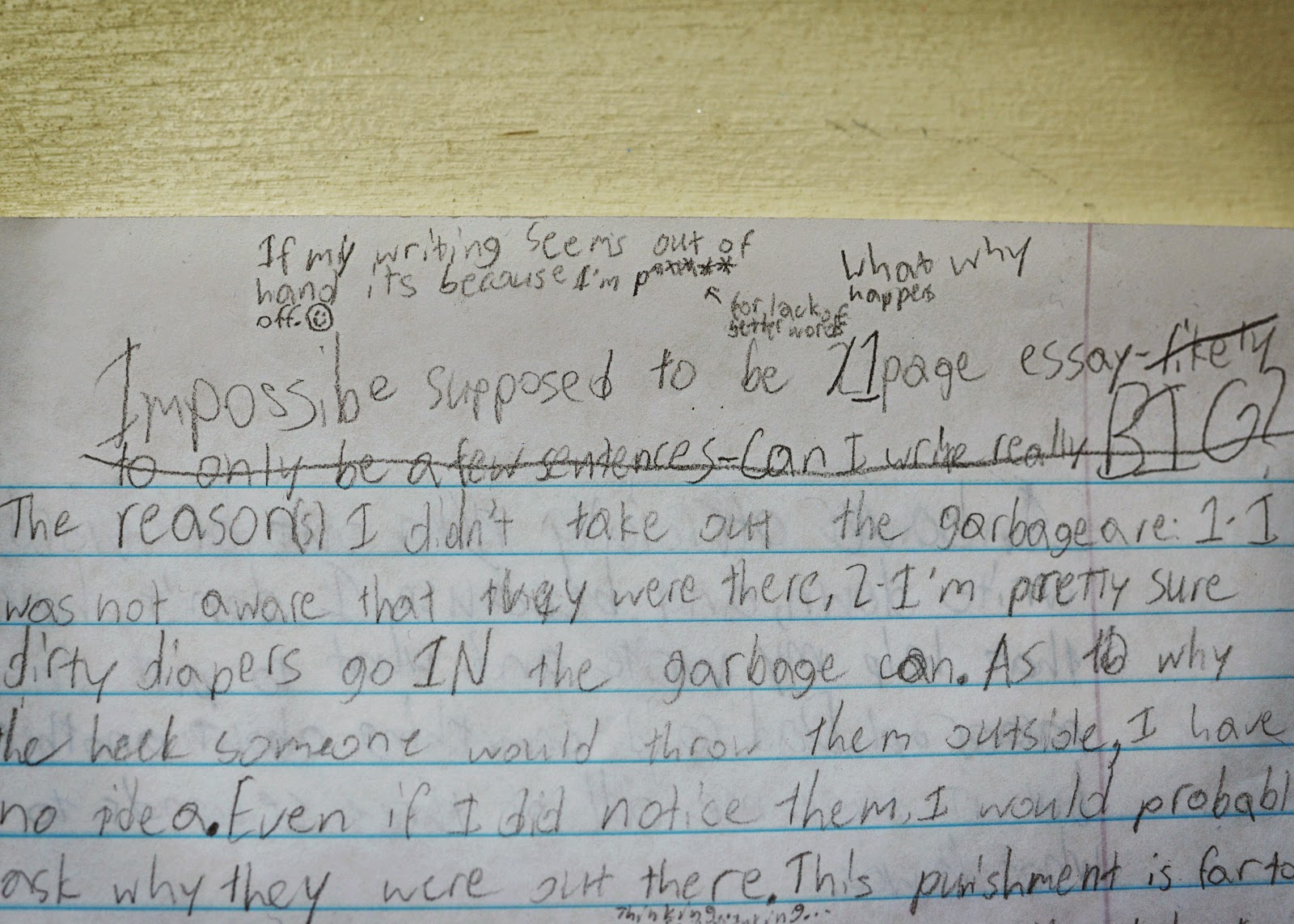 I really like how under being p***** off, he writes, "Impossible supposed to be 2 (crossed off and made 1 once we changed our minds) page essay - likely to only be a few sentences - can I write really BIG?"

So here goes the first page: 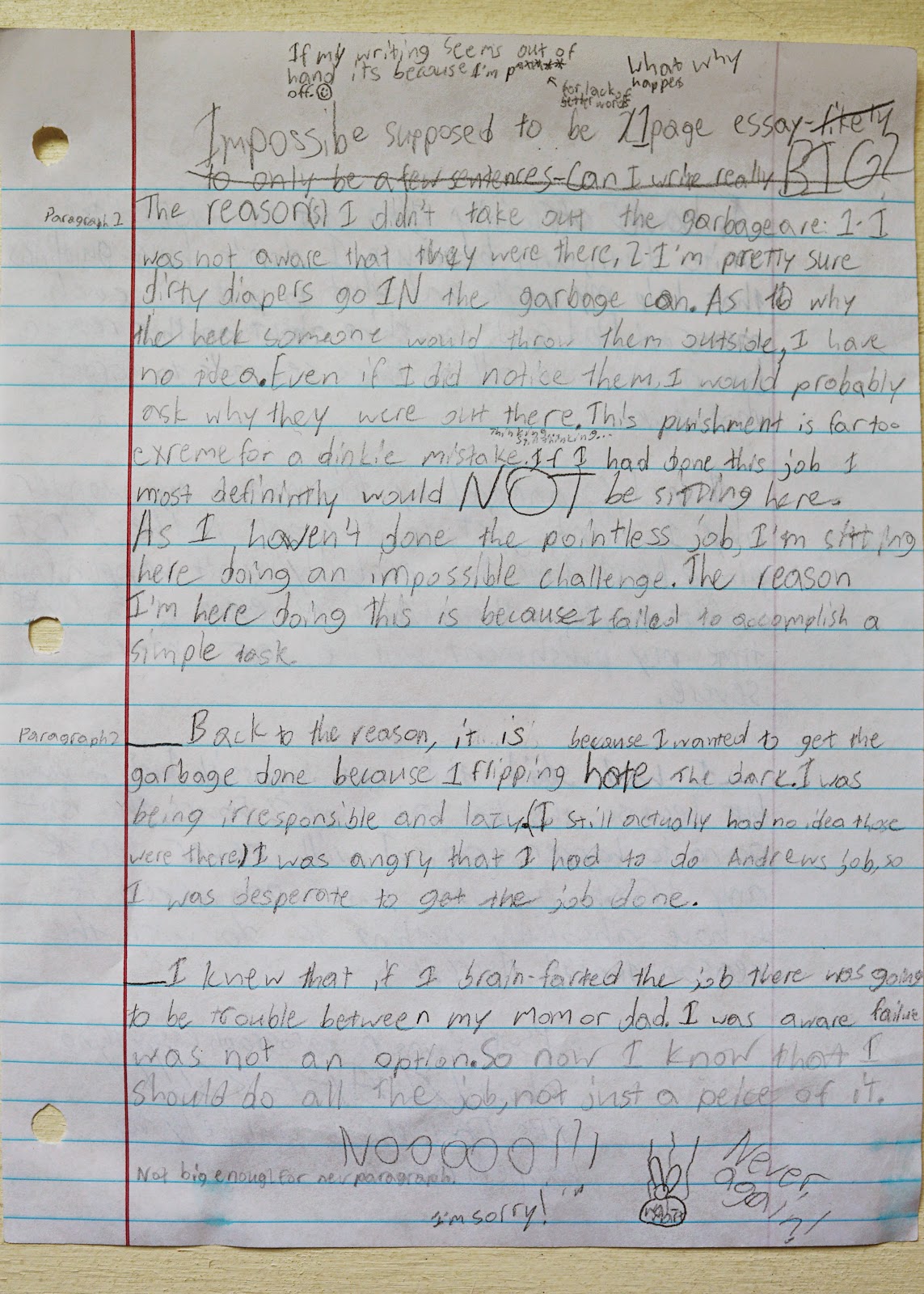 Paragraph 1 - The reason(s) I didn't take out the garbage are: 1 - I was not aware that they were there. 2 - I'm pretty sure dirty diapers go IN the garbage can.  As to why the heck someone would throw them outside, I have no idea.  Even if I did notice them, I would probably ask why they were out there.  This punishment is far too extreme for a dinkie (love this word) mistake. (In the small words above that line he says, Thinking... still thinking...)  If I had done this job I most definitely would NOT be sitting here.  As I haven't done the pointless job, I'm sitting here doing the most impossible challenge.  The reason I'm here doing this is because I failed to accomplish a simple task.

Paragraph 2 - Back to the reason, it is because I wanted to get the garbage done because I flipping hate the dark.  I was being irresponsible and lazy.  (I still actually had no idea those were there.)  I was angry that I  had to do Andrew's job, so I was desperate to get the job done.

(He stops labeling paragraph numbers) - I knew that if I brain-farted (love the use of this word too) the job there was going to be trouble between my mom or dad.  I was aware failure was not an option.  So now I know that I should do all the job, not just a piece of it.

This side is finished with some end of page notes like, "NOOOOO!!!", "not big enough for another paragraph" and "I'm sorry!".  My favorite end of page note is the picture of the apparently fumingly stinky plastic bag that he's labeled 'Wal-mart' and then says, "Never again!". 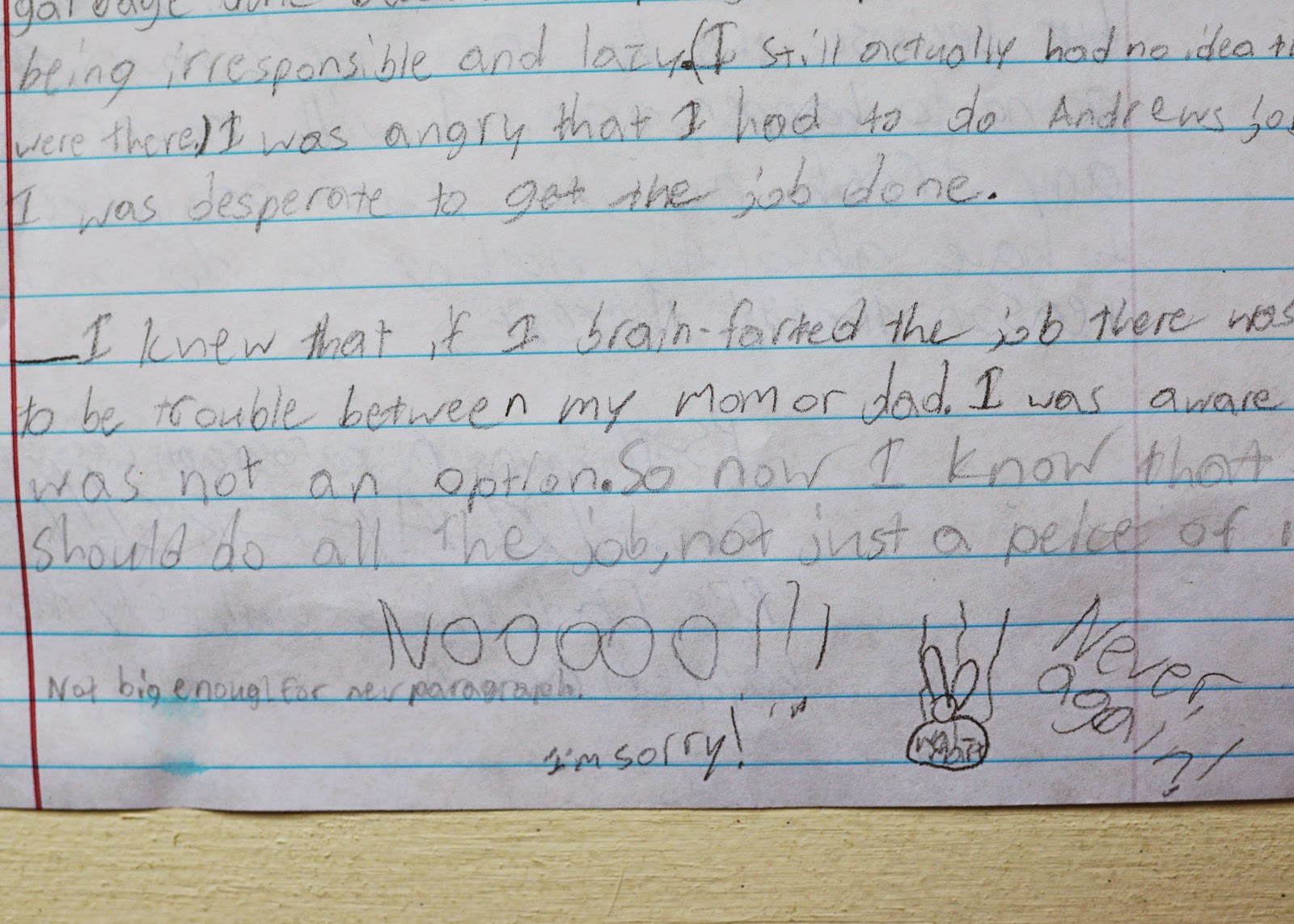 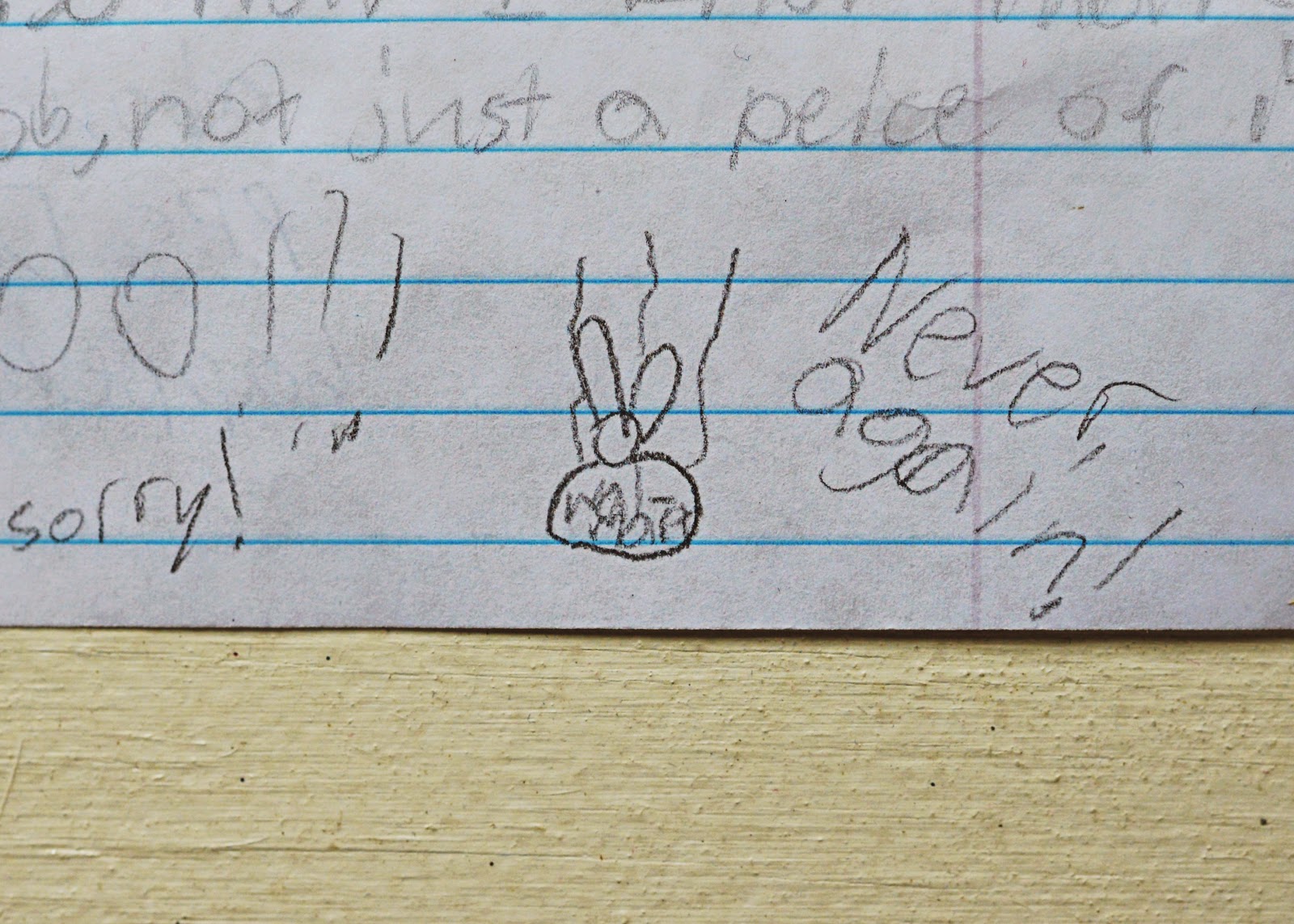 So now that we've all enjoyed the first side, we can delve into the second side! 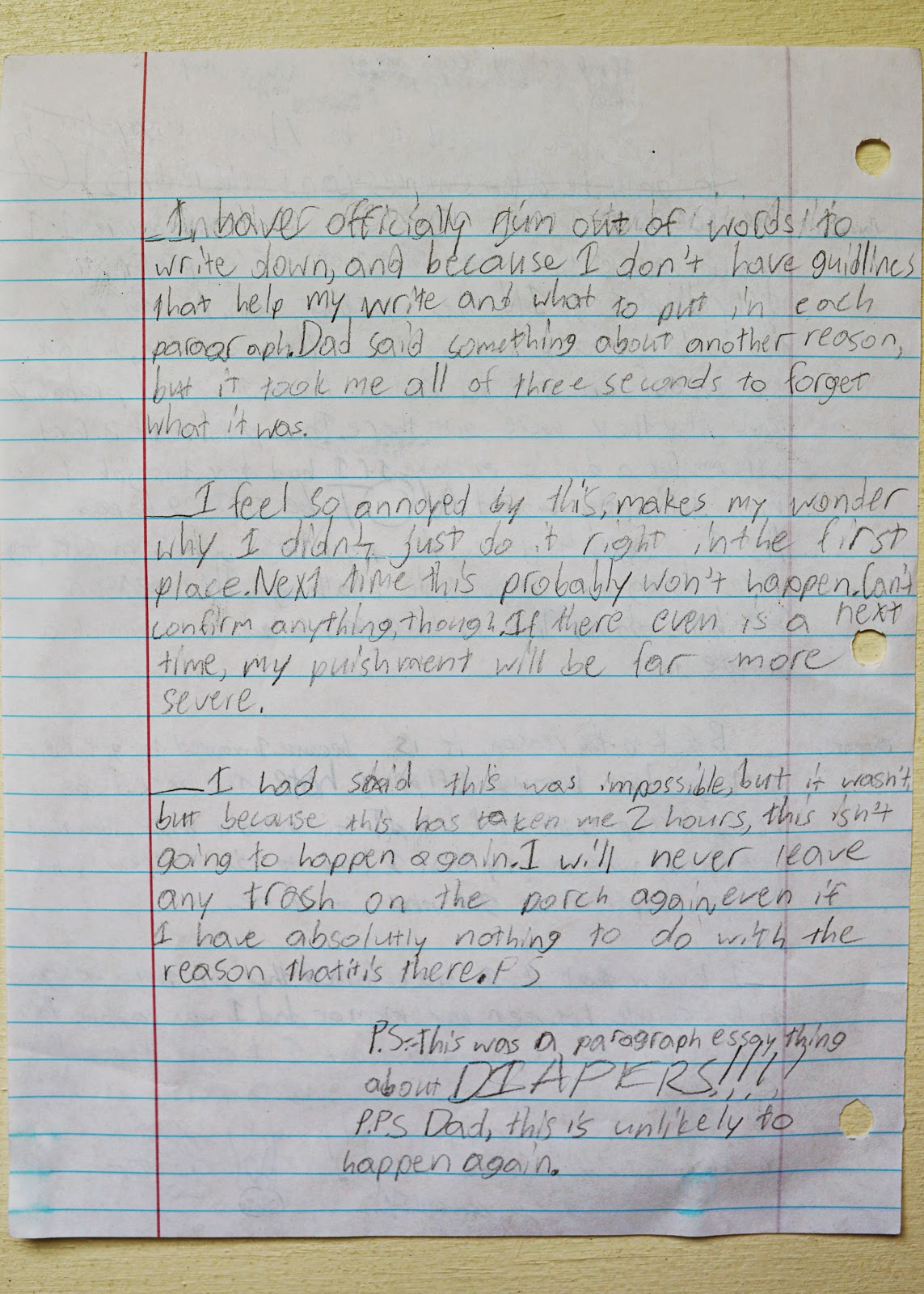 - I have officially run out of words to write down, and because I don't have guidelines that help me write and what to put in each paragraph.  Dad said something about another reason, but it took me all of three seconds to forget what it was.

- I feel so annoyed by this, makes me wonder why I didn't just do it right in the first place.  Next time this probably won't happen.  Can't confirm anything though.  (Like it, doesn't make promises he can't keep.)  If there even is a next time, my punishment will be far more severe.

- I had said this was impossible, but it wasn't but because this has taken me 2 hours, this isn't going to happen again.  I will never leave any trash on the porch again, even if I have absolutely nothing to do with the reason that it's there.

And my favorite parts of the entire essay are the P.S.'s. 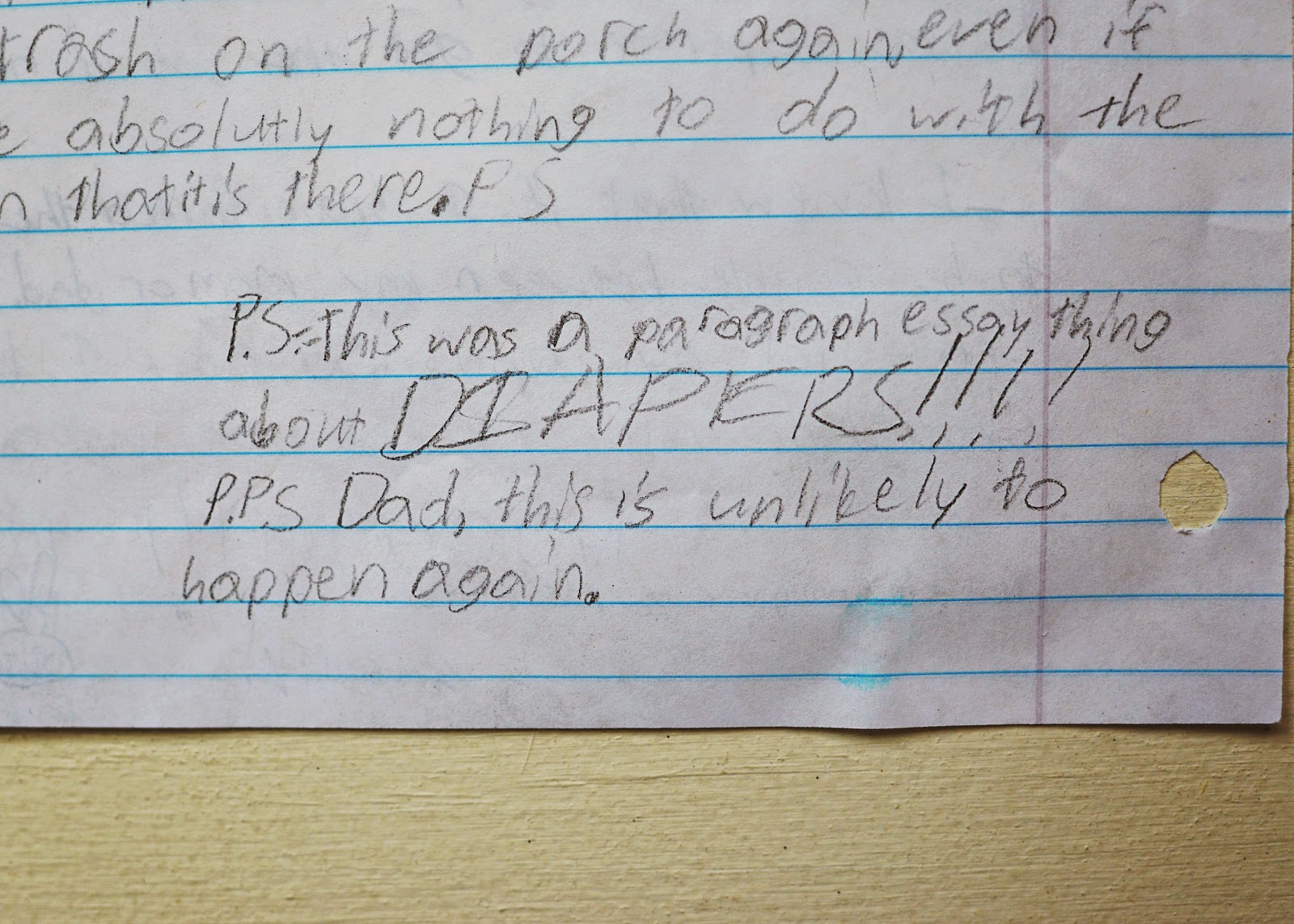 P.S. - This was a paragraph essay thing about DIAPERS!!!!

P.P.S. - Dad, this is unlikely to happen again.

Do you think we got our point across?  I think I'm going to have to give him more essays as punishment because they are so dang entertaining!

I love this, how old is he? I think he got the idea though!