I took my daughter to Children's Hospital today for a follow up appointment with GI.  She hasn't been to a GI clinic since October of last year, but we had gotten the great news that if her weight gain was good and she wasn't using her g-tube that at her next appointment we'd be able to take it out.  Something we were really hoping for.

I got Mallory all ready to go.  I packed her go bag a little lighter.  I scooped her up and put her in the car and we made our hour long trip up to Milwaukee.  When we got there, I decided I wasn't going to use the stroller.  I took her out of her car seat, grabbed the back pack I've substituted for her regular go bag and my purse and we headed inside to the clinics building.

We arrived on time, but GI must have been the place to be today because it was packed.  Every seat was taken.  While we waited, Mallory scooted around the waiting room and looked at the fish in the fish tank.  About twenty minutes later we were called back.

We met with a nurse who got Mallory's weight and height (which she stood for this time!) and blood pressure.  Then we were escorted to a room and met with the dietician who asked about her daily food intake.  I felt so proud to talk about how Mallory doesn't use her g-tube anymore.  That she drinks out of sippy cup.  That she can eat with a fork and spoon.  That she loves to eat.  Her weight gain has been excellent.  She weighed in at 28 lbs today.

When her GI doctor came in, it was exactly how I pictured it.  She was so happy to see Mallory.  She put her hand to her mouth and said "Oh my gosh! You look exactly the same but she looks so grown up!"  She couldn't believe how big she had gotten and how different she looked.  She was taken in by her personality.  She complimented Mal's beautiful, long hair.  She was so excited to see how great she is doing.

We discussed her eating habits a little more and went over all of the normals.  Does she choke or gag when she eats?  How often does she do the #2?  The fun stuff.  At the end of it though, it was decided the g-tube would come out.  I was so excited.  One more apparatus on my baby girl could finally go the way of the dinosaurs.  I know Mallory doesn't know or understand, but this was such a milestone day.

After the doctor took the g-tube out and gave me care instructions we discussed how well Mallory was doing again.  She told me that she remembered me from back in the ICU.  She remembered me arguing with her because I knew what I wanted for Mallory.  I didn't want her on a continuous overnight pump feed.  I wanted to push her to eat on her own.  I knew that she could and would do it. The doctor told me that Mallory was doing so well because we know her and we expect things from her.  We don't let her get away with taking the easy way out of things.  I've always wanted to push her just a little bit, with in reasonable means, to fight.  I want her to fight to be healthy.  I want her to fight to eat on her own.  I want her to fight to breath with out that trach.

I felt so good when the doctor told me this today.  I often think back at that time in the ICU and just how many other doctor's I may have pissed off.  I think back at the time I lost complete control, when we though Mallory was supposed to come home to us and she started having episodes again, and was trying to talk to a resident.  I had all of this stuff stirring inside.  I was mad and upset at the same time.  And I kind of shouted at her, "Oh my God, I can't do this".  It was probably the dumbest I've ever felt.  I felt half crazy and half like I sounded like some kind of idiot.  But when Mallory's GI doctor told me today that she remembered me as being the person that was fighting for my baby girl, I actually felt this weight lift off.  No matter how dumb I thought I may have sounded, no matter how stubborn I was being, or how defiant I may have been... it wasn't taken in that way.  I was that mom who was fighting for her baby.  I was that mom that wanted her baby to fight.  I was that mom that even though my baby was so different than her big brothers still had expectations of greatness from her.

I am proud of myself for this.  I am proud that I've been able to help Mallory be the fighter she is.  I hope anyone out there that has gone through the same things or is going through it now will not be scared to speak up.  To fight.  The nurses say it all the time but you do know your baby best and if you don't say it, no one will.

To date, Mallory has been through six surgeries, numerous procedures and countless doctor's appointments.  We were told a few months ago that she shouldn't need another cranial surgery for a year or two.  Her g-tube is now officially out.  She is now tolerating her passy muir valve so we are inching closer to getting that trach out.  It's because we've always given her that little push.  We've always trusted her with her own instincts too.  She knows she can be successful.  We let her weed things out for a bit and we show her around but then she pushes herself through.

Today was a proud Mommy moment for me.  And I will go to sleep tonight with a smile on my face.  Before parting today, her GI doctor told me to send her a picture when Mallory gets decannulated.  Of course I will do that.  The day Mallory gets decannulated.... I don't think there will be  soul that knows me that won't see a picture.  She is one amazing little girl and we as a family are so proud of the fighter she is and to share her with the world. 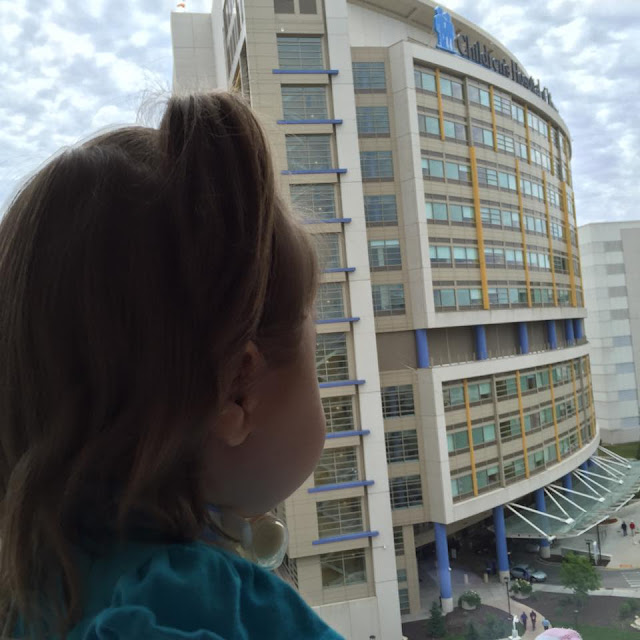 
Hello there! This is kind of off topic but I need some advice from an established blog. Is it tough to set up your own blog? I'm not very techincal but I can figure things out pretty quick. I'm thinking about setting up my own but I'm not sure where to begin. Do you have any ideas or suggestions? Thanks hotmail sign in email

Hi Patricia! I wouldn't say I'm necessarily an established blog. I don't have a lot of readers. So I'm not sure how much help I can be. However, it isn't hard to set up a blog. This blog is set up through Blogger and I think is pretty easy to operate. I just write when I want to write and post to my social media! :) If you have any additional questions let me know!