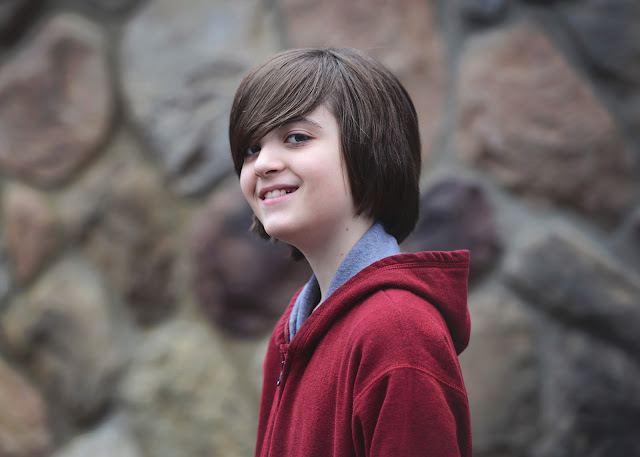 Andrew's birthday was yesterday.  I can't even believe he is twelve now.  Where the heck does twelve years go?  I mean really, when they say these years fly, they really do.  From the time Andrew was born to today we've welcomed three more children to our brood.  He's lived in four different house and attended four different schools.  He's of course done all the instrumental things that come with growing up too, like losing teeth, learning to read, going to his first dance, getting his first injury that required a hospital trip and so much more (obviously!).  I cannot believe how fast it really does zip right by.

Today this kid is amazing.  We just moved into a new house and he's already jumped into the school's Spring play.  He makes friends quickly.  He is so kind to everyone.  He's writing a friggin' book.  What middle school kid tries to do that?  I hope he knows that I expect him to be a published author now!  He also loves photography.  He has asked me to teach him and he really learns quickly.  I love that he keeps his mind so open to everything.  I, however, will still always remember the little guy that wore blue plastic glasses while playing with his toy school bus at the little table we had for them in the living room. 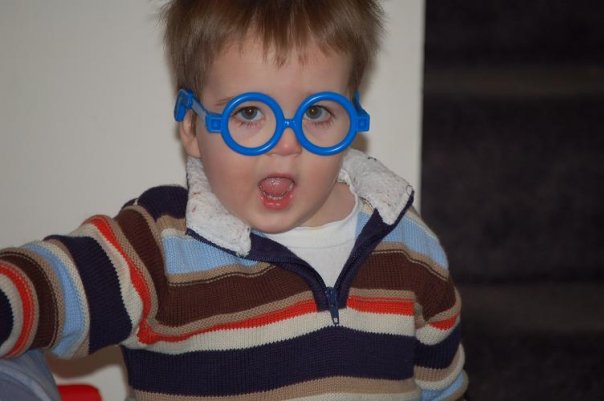 This year for Drew's birthday, his dad is on the road.  We know how hard it can be when their dad is traveling, especially for a birthday, so we decided to do have a little fun over the weekend so we could all spend some time together before he left for his trip.  We went and saw the Lego Batman movie and we let Andrew pick a pre-birthday dinner.  He chose one of his favorite dinners, pasta salad, and root beer floats for dessert.  Who doesn't love root beer floats?  I love that the boys choose out of the box desserts!  It was a really nice day and I was happy Andrew could have a little celebration with his dad here. 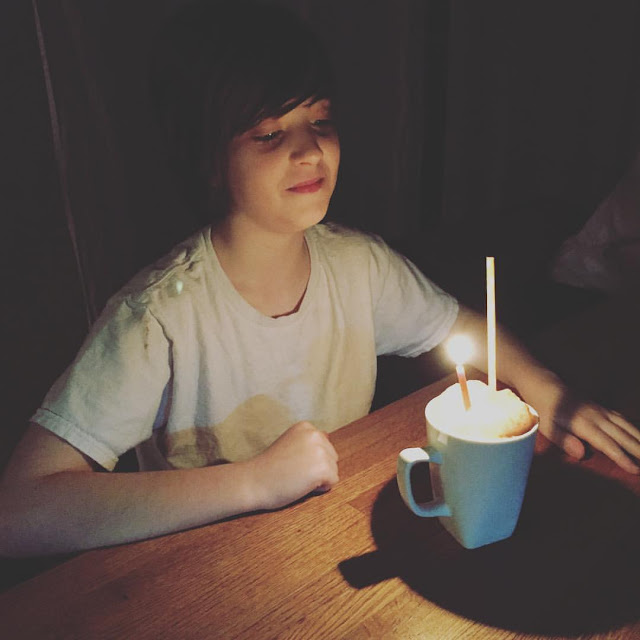 The night before his birthday I felt like I needed to do a little extra something for Andrew.  I'm kinda psychotic about making sure my kids feel super important on their birthdays.  I never feel like I'm doing enough.  So at about 11pm I decided to make him some muffins for breakfast.  I knew I had some leftover strawberries in the fridge, so I looked up a recipe for strawberry banana muffins.  I turned on some Grey's Anatomy on my little white counter TV and got to baking.  After all was said and done, I finished up at about 1 in the morning.  I was so excited for Andrew to see his 12 muffins on his 12th birthday.  Apparently one of our cats got hungry though and managed to get into the wrap to nibble on one of them before we all got up.  The snot.  But when Andrew got up, he was super happy and said they were really good! 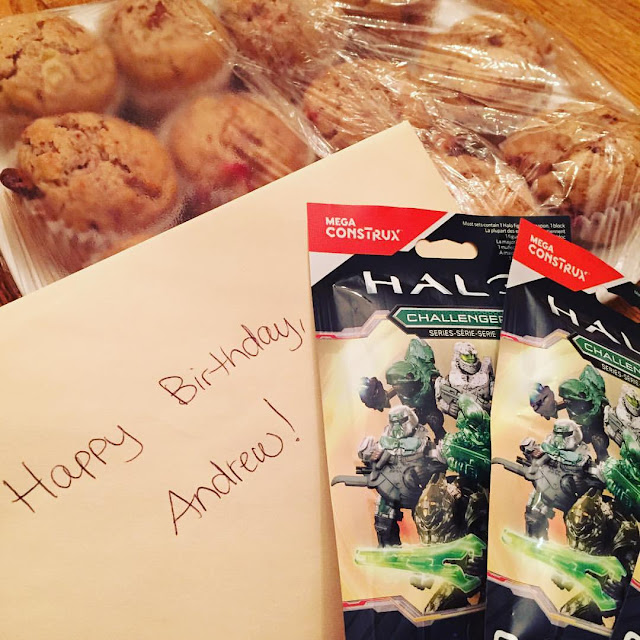 I also bought him a card.  One of those cards with the weird dog on it, sporting oversized googly eyes that said something along the lines of "it's your birthday and I'm so excited...." on the outside and "that I could poop!" on the inside.  He told me it was the best card he's ever gotten.  No better gift than to see him laugh so hard at something so silly!

The only thing he really wanted for his birthday was a new bike.  We ended up ordering it online and the delivery date was on his birthday.  We were going to wait until the end of the week so his dad could help put it together but I really wanted him to be able to ride it right away.  It was so nice outside too, it would have been a shame for him to just see a box full of bike parts.  I'm going to go on record and say that I'm definitely not great at bike building.  I did not spend much time reading the cryptic directions, but I did look at many an angle from the Amazon page to make sure I was constructing it properly.  I managed to get it together though and also did a little fun decorating for him to see when he got home from school! 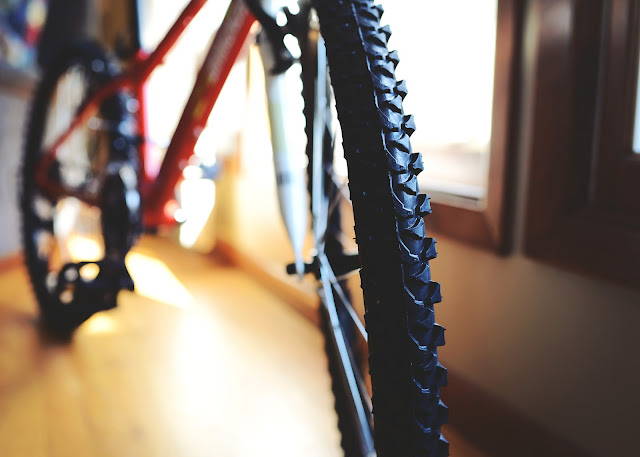 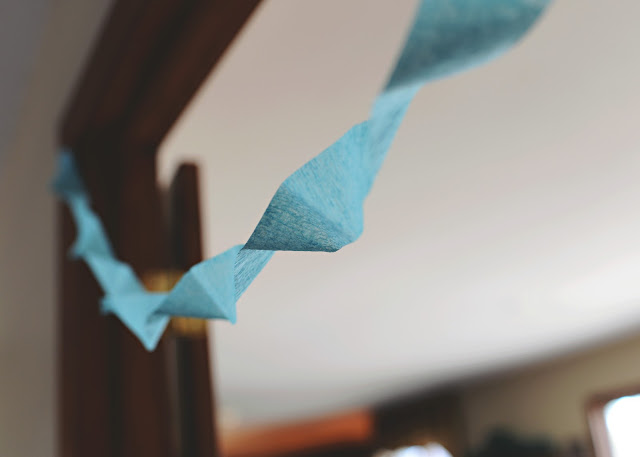 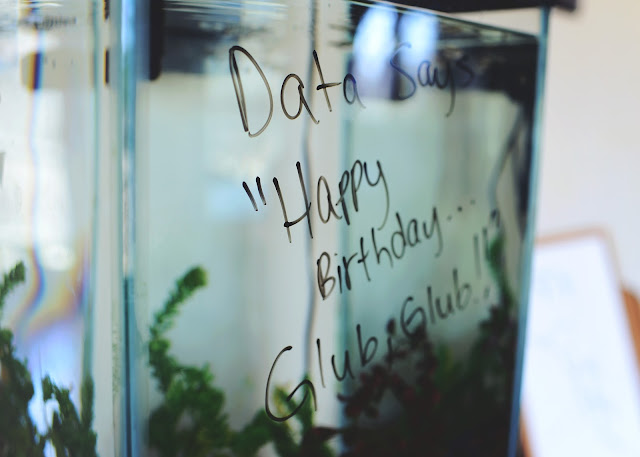 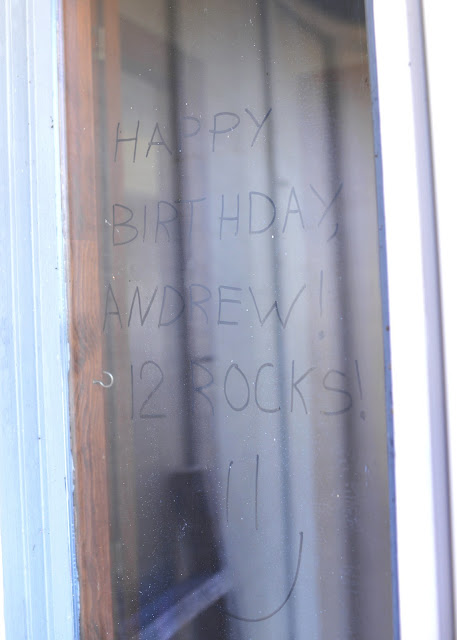 No big surprise, when Andrew got home, he immediately took his brand new bike outside.  Everyone else wanted to be outside too, and why the heck not... it was GORGEOUS out!  So we all spent a little time riding bikes and hanging out outside, really for the first time since we've been in our new house. 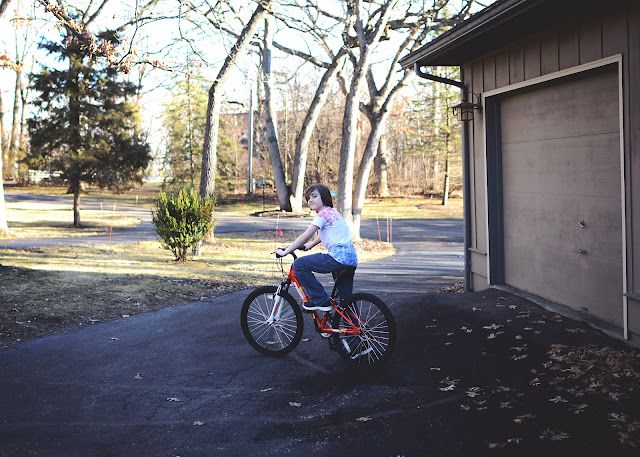 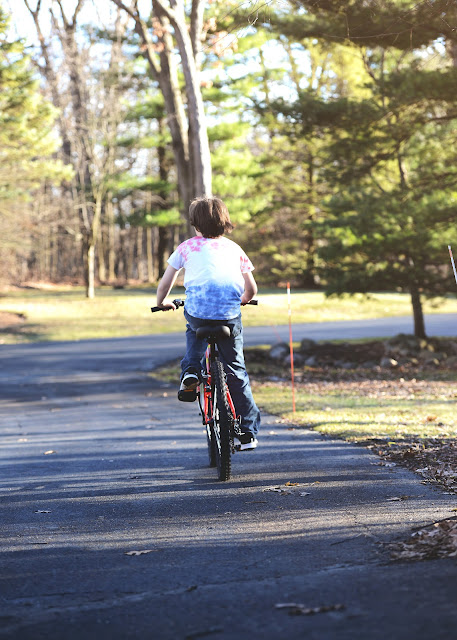 Quentin's racetrack (our driveway is a big U, maybe even an O shape) was finally open for business too! 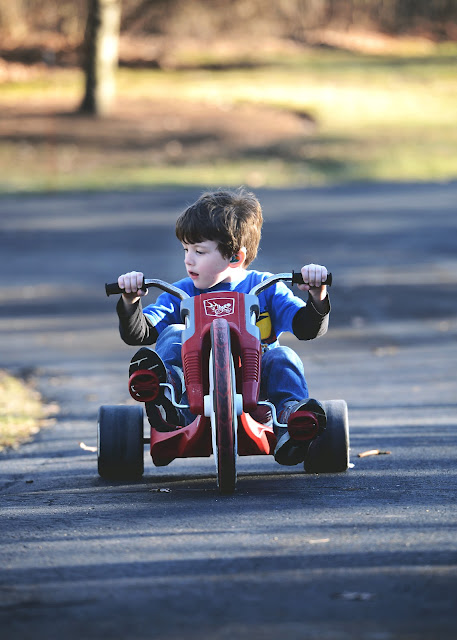 Mallory got on her tricycle and big brother Jeremiah helped her peddle around. 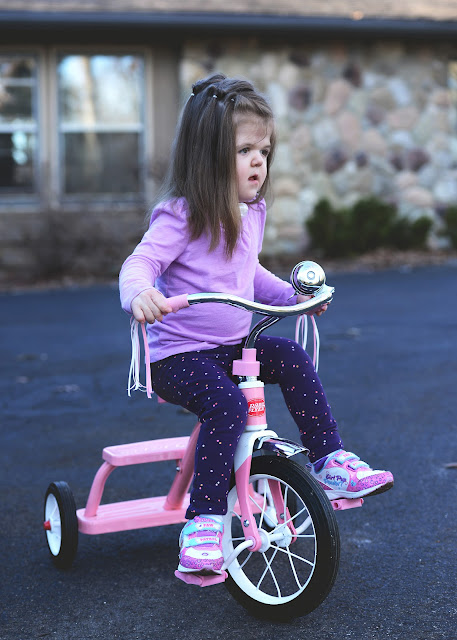 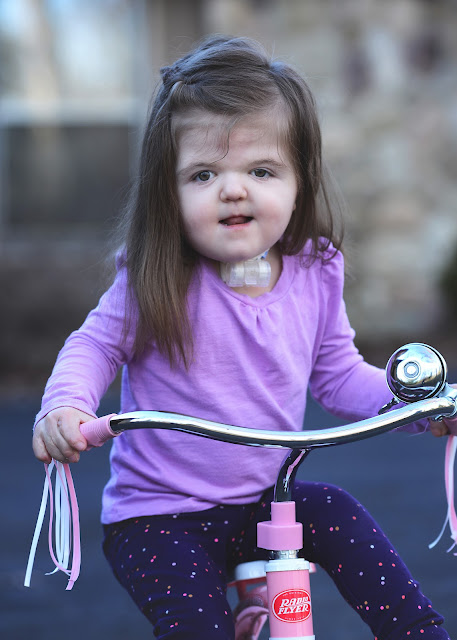 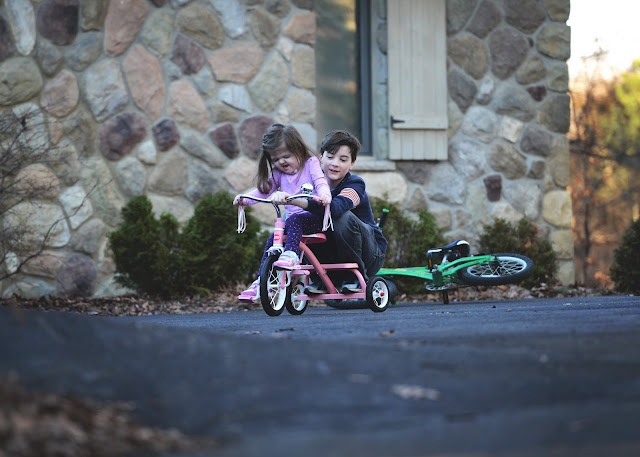 It was lots of fun getting outside and getting the kids outside to have some fun! 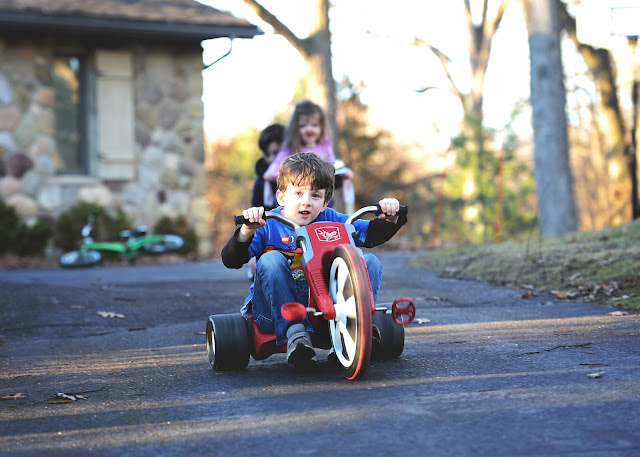 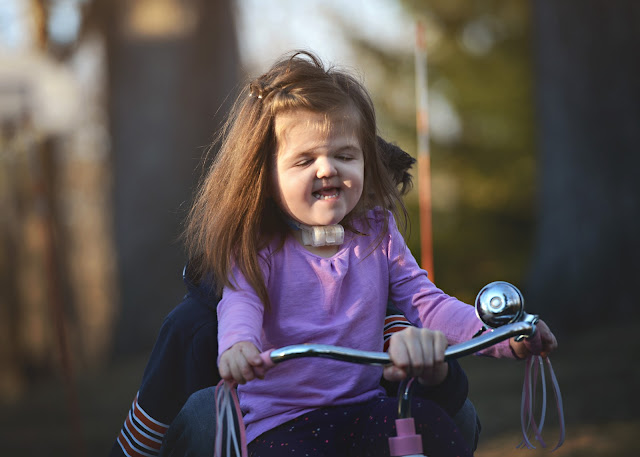 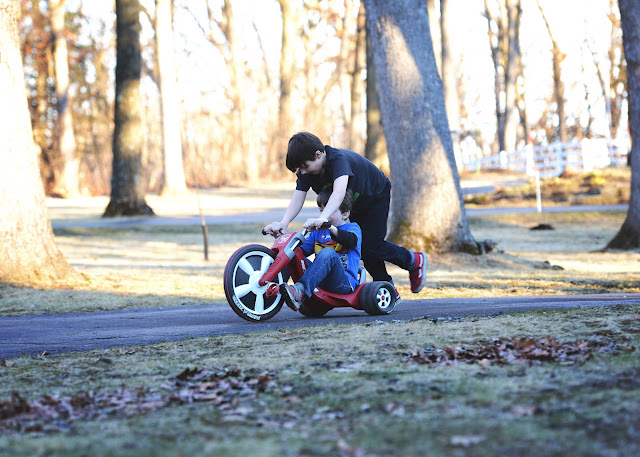 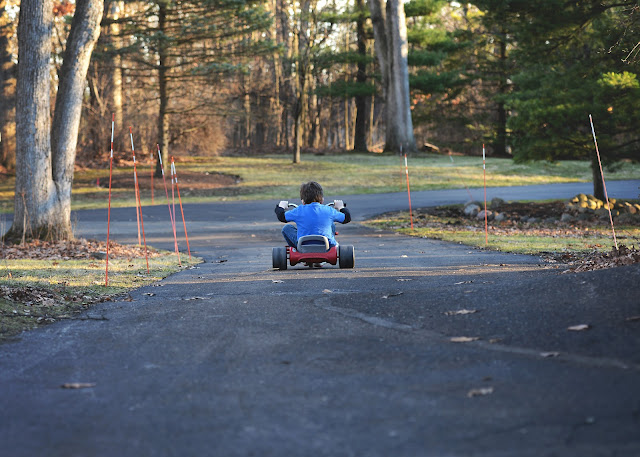 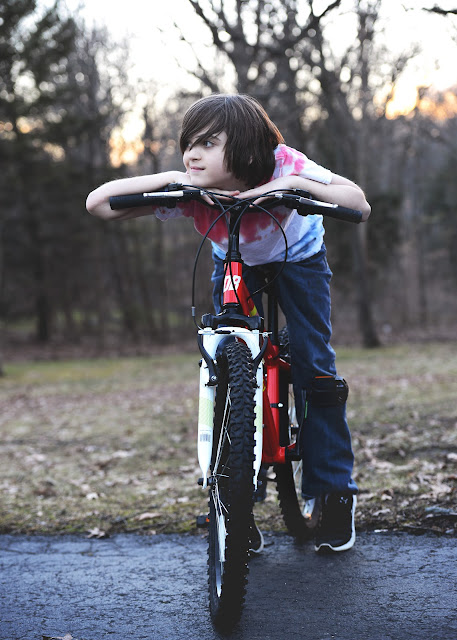 After all of that it was time to prepare Andrew's birthday dinner.  He wanted to have breakfast foods. I had decided to do waffles, eggs and omelets, sausage, bacon and hash browns.  If I could give out a handy piece of advice, I do not recommend attempting this kind of meal on your own.  Unless maybe you are a chef or someone who can manage like 3 different pans, an oven and a waffle maker on your own with ease.  I hopped from the egg pan, to the hash brown pan, to checking the bacon in the oven to the sausage pan, to mixing and pouring waffle batter, back to the egg pan, mixing up more egg yolks for another omelet, to checking the bacon in the oven again and so on.  It was so insane that I even managed to crack an egg outside of the mixing cup! 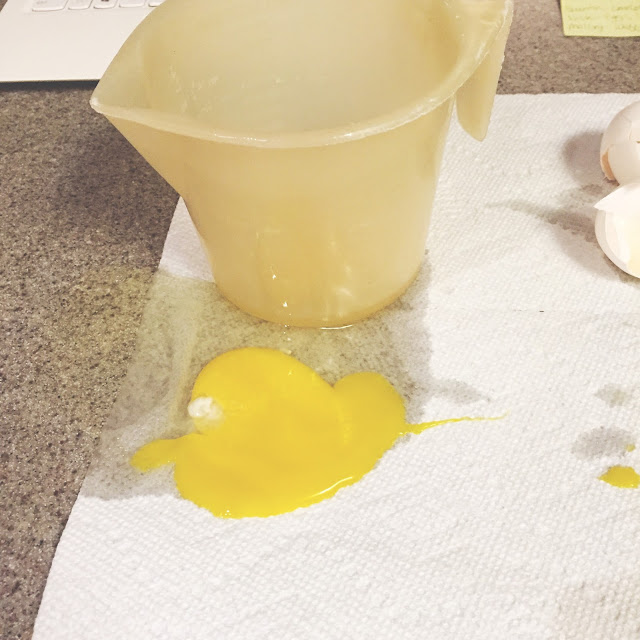 In addition to that sad little egg, the hash browns also did not make it.  Apparently I am entirely clueless as to how to make them.  I gave up after I managed to burn them to the bottom of two different pans.  Despite all of that craziness, the kids loved the meal and pretty much devoured everything! 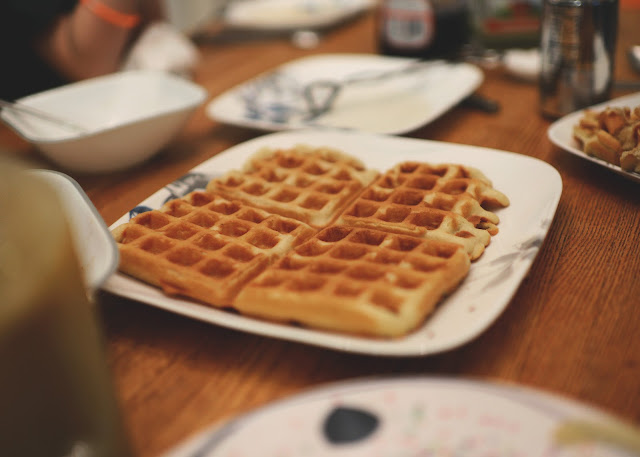 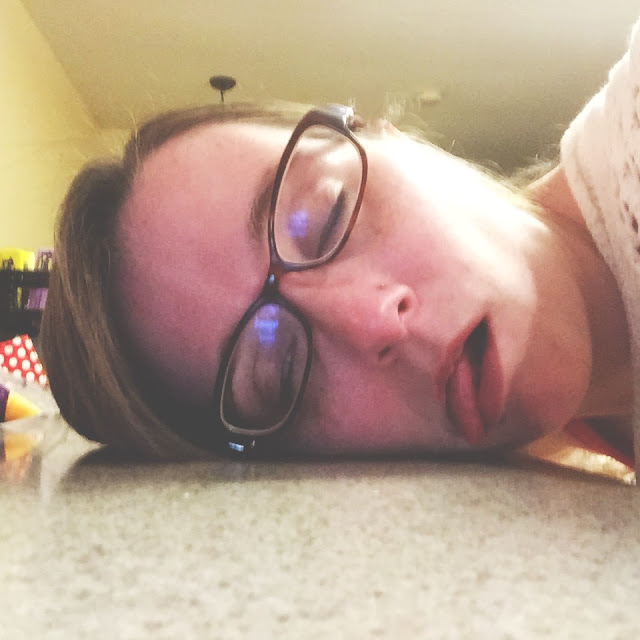 My favorite part of the entire day was dessert.  It made all of the hard work and insanity so worth it.  Andrew's big brother, Jeremiah, told me that he wanted to say a little something after Andrew blew out his candles.  I said, "ok" to him and proceeded to get the apple pie ready with out thinking too much about it. 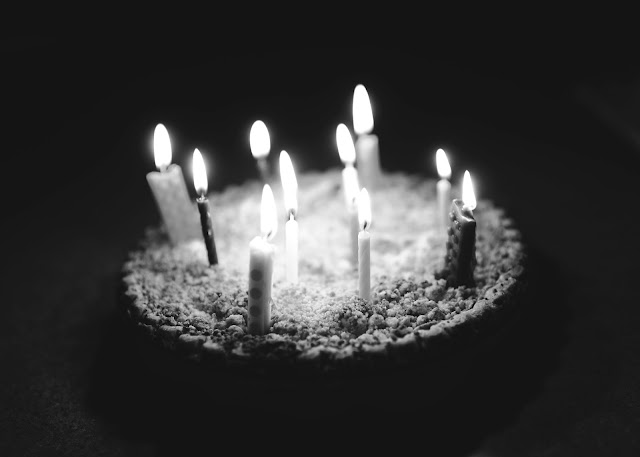 We sang 'Happy Birthday' and Andrew blew out his candles. 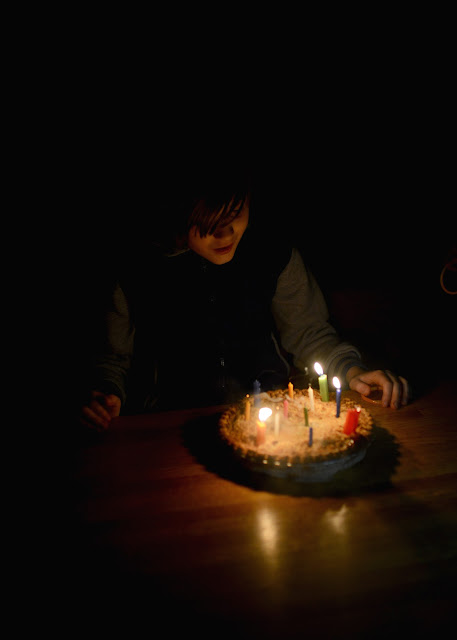 Then, Jeremiah stood up, reached in his pocket and pulled out a little piece of paper.  This is what he said to his little brother:


"Happy 12th Birthday!  I would like to say some things.  I think you are an amazing brother, though sometimes a pain in the rear.  But the truth is, you are one of the nicest people I've ever met.  It's the small things that can make a big difference (not that there's a problem with big things).  For example, last night you gave me the rest of your soda.  You asked for my opinion on the dinner for YOUR special day.  You make sure there is not a day that goes by where you haven't tried to brighten someone else's day, instead of your own.  It is these acts that make you who you are, and that is a very good person.  Stay the way you are, don't change. There is a need for people like you in this world."

I was stunned.  In a good way.  It was so special to see Jeremiah acknowledge his brother in such a positive way.  I see them being brothers, sometimes arguing, sometimes laughing, sometimes really in hate with each other but at the end of the day they really do see each other for who they are.  I know it probably took a lot for Jeremiah to do that and I was very proud!  It was an amazing letter, an amazing experience and an amazing day!

I sure hope Andrew had a great birthday!  It's bittersweet for me.  I miss the days when they were younger and more innocent but I'm also excited to continue watching them all in their life journeys and to see who they become! 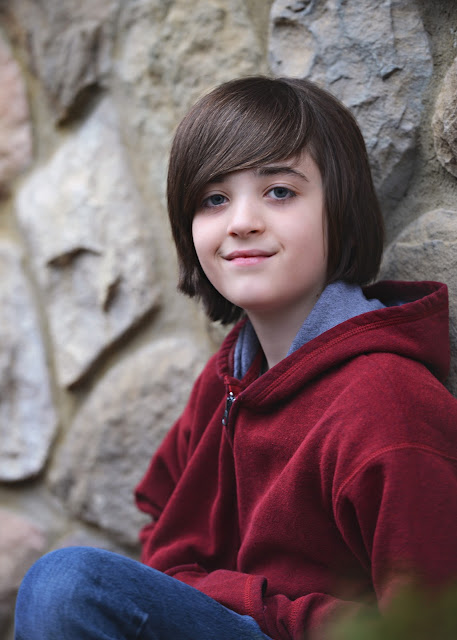 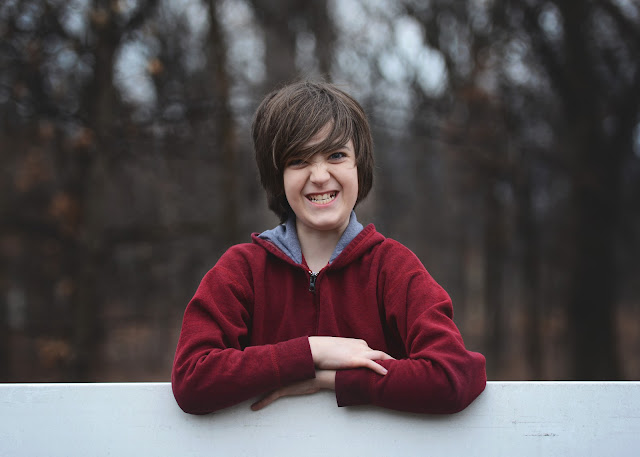 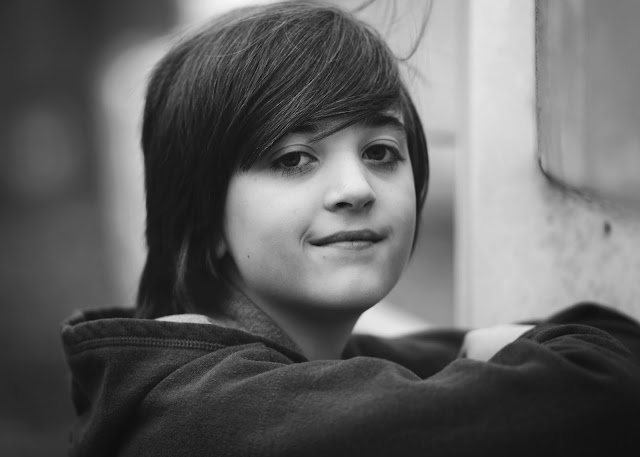