When I originally thought about making Mallory's birthday blog, I thought I'd start with a bunch of old pictures.  NICU photos.  Surgery photos.  All of those past hardships that have taken us to where we are today.  However, I've changed my mind.  Don't get me wrong, all of those things matter.  They matter so very much.  She wouldn't be the strong little girl she is with out all of those experiences and those memories.  They definitely make up who she is... a completely amazing little girl.

For this blog,  I just want to talk about her day.  I want to talk about who she is right now, without thinking about all of those past things.  Just for today.  The night before her birthday, I was so antsy for her special day to get here.  I actually hopped back on the emotional ride of re-reading my old blogs about her hospital stay and looking at many, many, many old photos.  This girl is so amazing.  She really is.  I wouldn't wish what she has to endure on anyone, but I don't think I could imagine her any other way.  Her purpose for being here has always been clear to me.  She brings so much to my life.  I don't even think there are words for it.  When I actually try to find words, my eyes well up with tears and all I want to do is hug her and hold her forever.

Her birthday started with her birthday girl photo shoot.  I do a birthday shoot for all of my kids.  I guess that's a perk of being a photographer... he he.. Photos whenever I want them!  I actually did them before bedtime the night before her birthday.  I dressed her up in this new dress we had picked out for her using a gift card she got as a birthday present from a party we had a week earlier.  I swear, this girl... Sometimes I think she was really made to be in front of the camera. 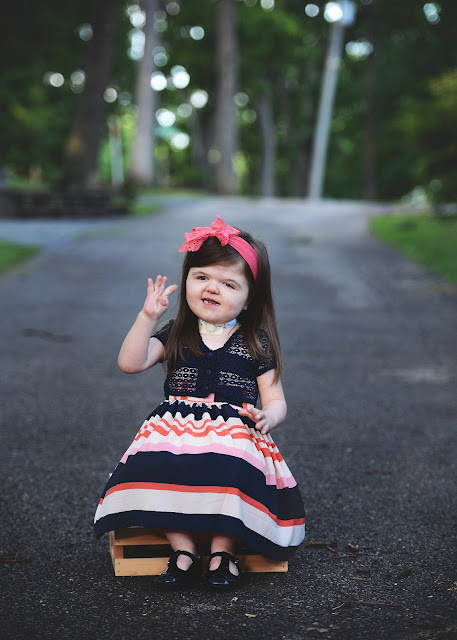 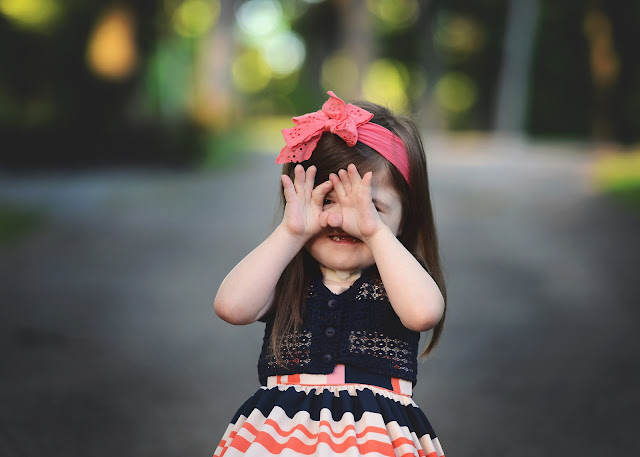 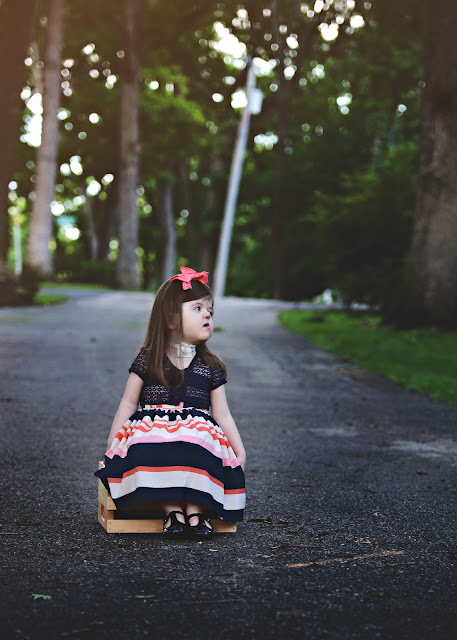 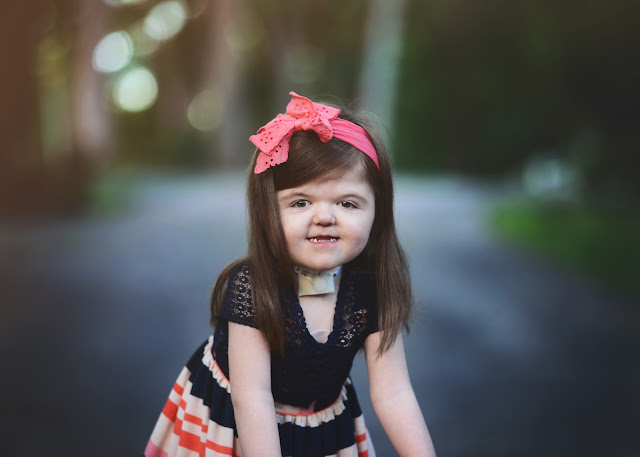 She wanted to jump and twirl.  She loves being outside so much.  She would seriously drop just about anything she's doing to go outside and play.  My little outdoorsy ladybug. 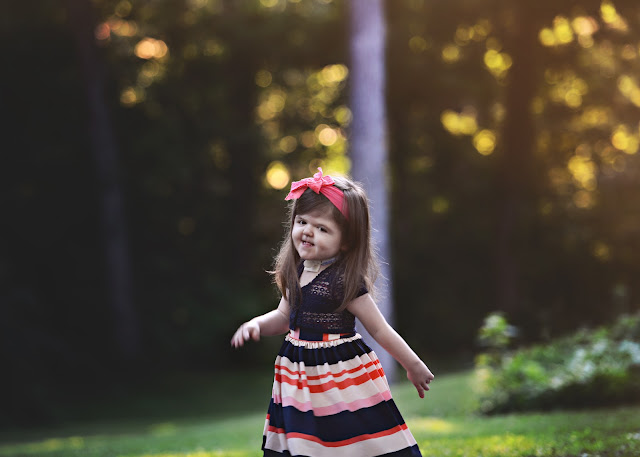 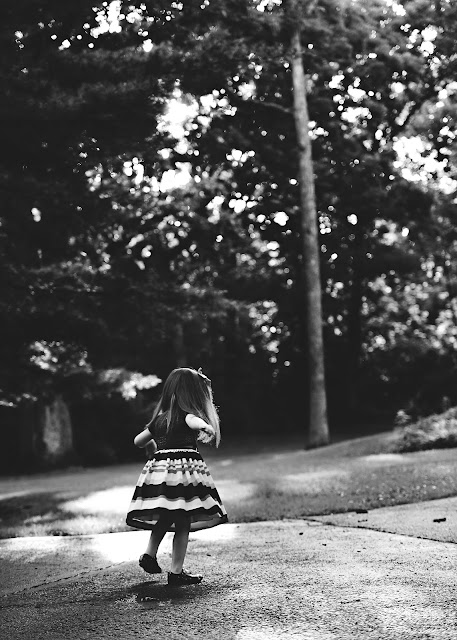 The morning of her birthday we had to get up on the earlier side, early for summer break anyway, and head to an orthopedic appointment I made for her.  I wasn't thrilled it was on her birthday, but you get what you get with these appointments.

It actually went well.  I had concerns about the way she was walking.  In the past couple of months I observed her right foot pointing outward when walking and I wanted to make sure there wasn't something going on that needed more attention.  She had a couple of x-rays done.  This was quite entertaining.  The outfit they put her in was seriously hilarious!  The shorts she was wearing were probably too big for me!  She was a great sport about it though! 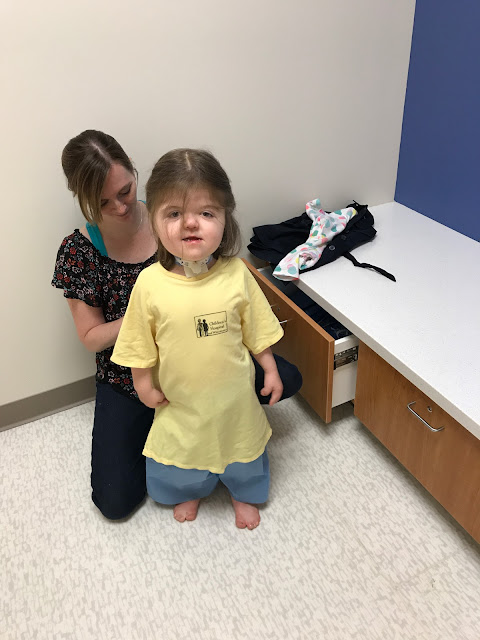 We met with the doctor after the x-rays and he told us that her hips look normal and her skeleton looks normal.  She has a mild leg length difference, by barely a centimeter, and she has flexible flat feet.  But there was nothing concerning that he felt needed any surgery or correction.  He thinks she may just be compensating in her walk because of the leg length difference.  He wants to see her again, but not for about 2 years unless we notice any significant changes.  So yay to that!

About ten people wished her a happy birthday and she snubbed them.  She even received a new dolly from one of the nurses, but no thank yous.  I tell you, this girl is becoming quite a diva!

Not long after we got home (and a quick detour to the grocery store) we decided to let her open presents.  Normally we do presents after dinner, but I really wanted her to be able to enjoy her new toys for as long as possible on her actual birthday.  I think part of it was guilt because what I really wanted was to have a family zoo day today, but darn that rain!!

We have a tradition in our house when it comes to birthday presents.  The kids can choose to have their gifts wrapped for a mass opening, or they can choose to have a treasure hunt for their unwrapped gifts.  I'd say 99.9% of the time, the kids choose the treasure hunt.  Honestly, the treasure hunt is fun for my husband and me too.  We really love the creative places they look that give us ideas for the next time!  For Mallory, I ended up wrapping her gifts in the pink wrapping paper my husband had bought the day before.  I still wanted to do a treasure hunt for her though.  She loves watching her brothers look for their gifts.  Why not let her give it a go? 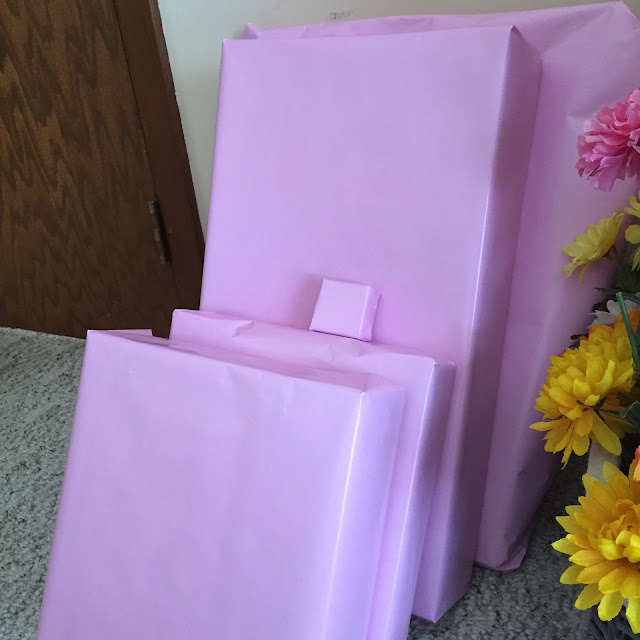 We made it a little easier for her, but we explained that she had to find 5 pink boxes and she went on the hunt! 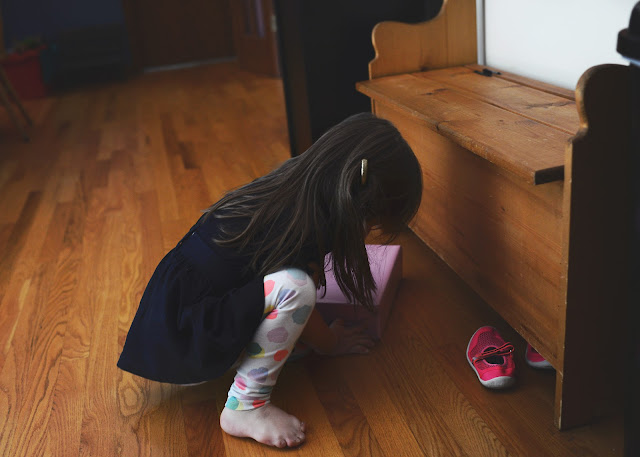 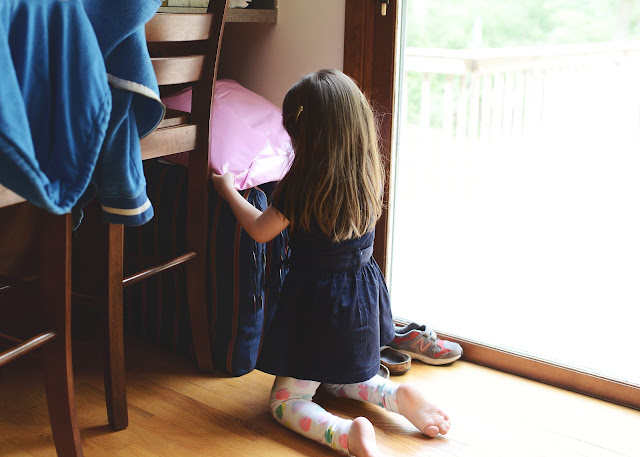 Then it was time to open! 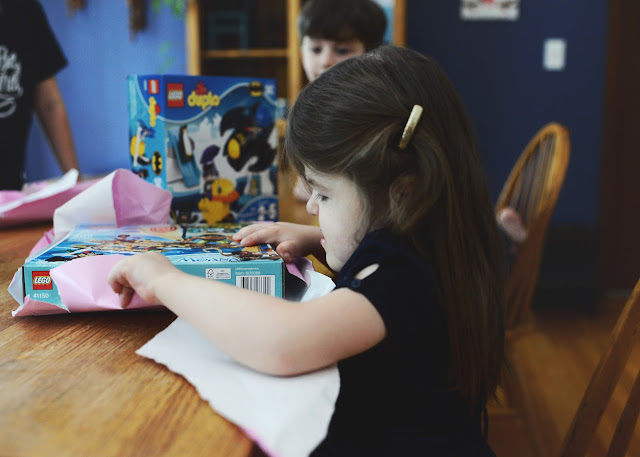 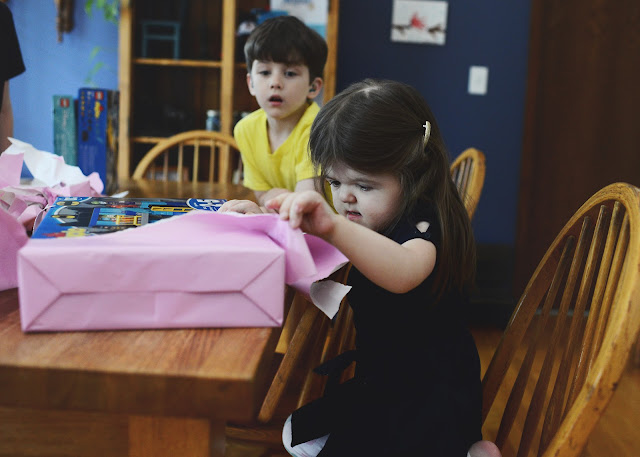 She got a new necklace with an 'M' on it, 2 Batman Duplo sets, a Moana Lego set and a Batgirl costume! 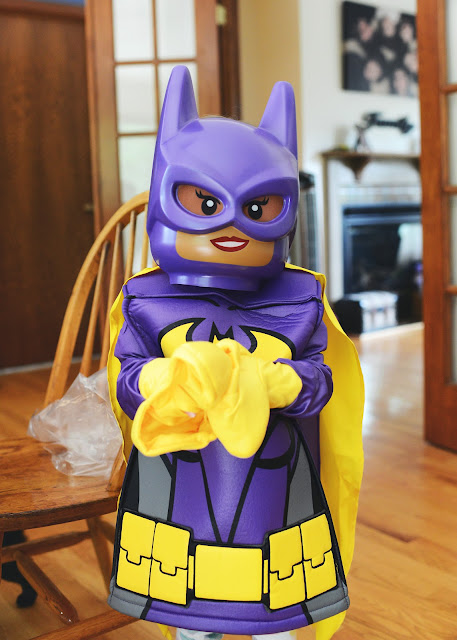 That Batgirl costume was friggin' awesome!  She wore the shirt and cape for most of the afternoon! 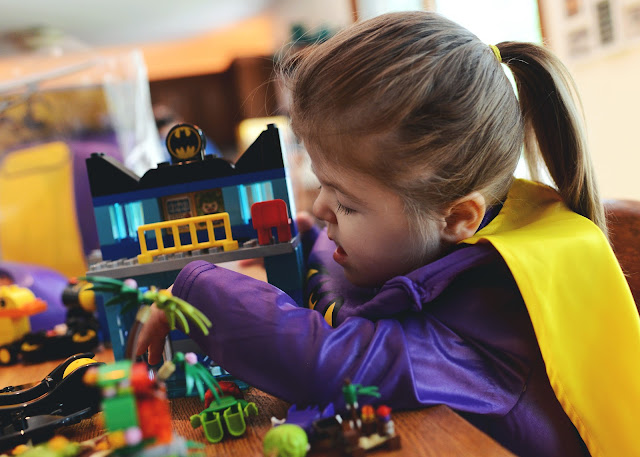 She looks so serious in all these photos, but I promise she was having fun!  She was just focused!

Mallory played with her new toys for hours.  She let her brothers play a little too.  But what was she most excited about?  Her macaroni & cheese dinner, of course!  She'll tell you it's her favorite!  She enjoyed macaroni & cheese along with dinner rolls and some applesauce.  I got a few hugs and thank yous from Mallory and Quentin for the awesome dinner!

Then, it was dessert time.  There's only one dessert Mallory will eat.  Any time I offer her something else, she declines it.  No cake.  No popsicles.  No cupcakes.  No cookies.  No way.  The only thing she will eat is vanilla ice cream in a container.  She won't even eat vanilla ice cream out of a bowl.  It has to be in one of those little containers.  So, what did we do?  We stuck a candle in a vanilla ice cream container. 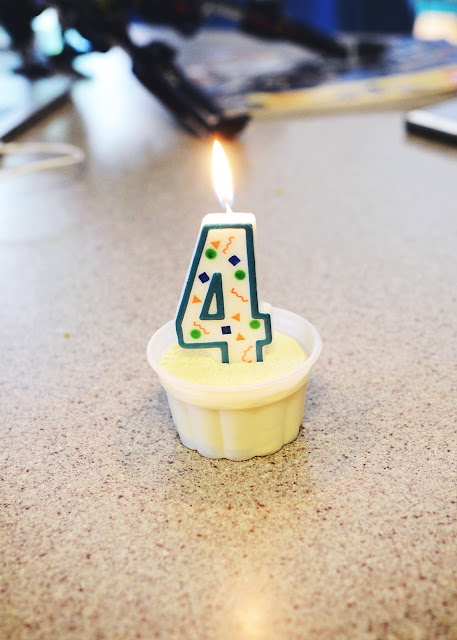 We sang 'Happy Birthday' and when we were done she just kind of sat there.  We all told her to blow out her candle and she did it super fast! 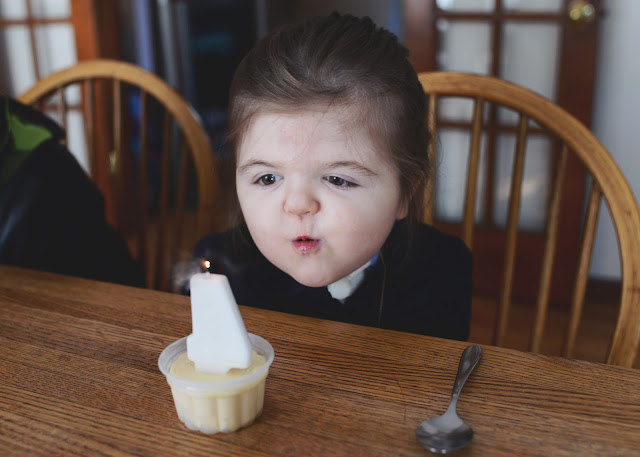 I think Mallory had a wonderful 4th birthday!  At least, that's what she said when I asked her.  I can't even believe she's 4.  I say that with all of my kids though...  They grow so fast and I can't believe these years just keep flying by the way they are!  I'm very happy that Mallory had a nice, normal birthday this year.  She had fun.  She got to do the gift treasure hunt.  She got to pick her birthday dinner!  She's such a big girl now, and I can't wait to see what year 4 brings for her!
Posted by Cathy at 9:46 PM No comments: